New film version of Dickens' classic is all about the laughs

Whether David Copperfield (as played by Dev Patel) shall turn out to be the hero of his own film, or whether that station will be held by anybody else, this review must show. And, in truth, while Dickens’ tale is still up to entertaining the crowds, his erstwhile orphan is more confectioner than hero in director Armando Iannucci’s The Personal History of David Copperfield. He stands mostly off to the side, casting whimsical Victorian visions, but seeming little invested in events himself.

In many ways Iannucci’s Copperfield bears a striking resemblance to the charming 2017 Dan Stevens film, The Man Who Invented Christmas. That, too, was a story about the creative writing process, showing us how A Christmas Carol came to be assembled in Dickens’ imagination based on events in his youth. Something similar happens with Copperfield.

The difference is Carol is 31,000 words. David Copperfield the novel runs more than 10 times that. So while the holiday classic is just the right length for reimagining while still having time to hit the high notes of the original, whittling Dickens’ magnum opus down to a mere two hours means choosing a thin slice out of a very large pie. The wedge Iannucci serves up is the tartest and, in some ways, least representative of the whole.

Essentially, he recasts Copperfield as a farce. 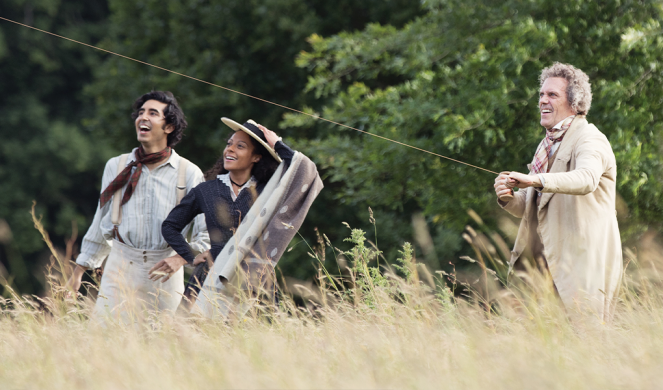 The complex, though admittedly often ridiculous, characters who populate David’s life become nearly as fantastical as Scrooge’s three ghosts. The winsome family by the sea, the Peggottys; the artful debt dodger, Mr. Micawber (Peter Capaldi, aka Dr. Who); donkey-foiling aunt, Miss Trotwood (Tilda Swinton), and her sidekick, the kite-flying Mr. Dick (Hugh Laurie)—Iannucci draws them all as outlandishly as ­cartoons.

The same goes for Mr. Wickfield’s alcoholism and Dora’s immaturity and attention-seeking. Iannucci plays them solely for laughs, never for the tragedy we see in the source material. We don’t yearn to see David come to his senses and finally recognize that Agnes would be a wife worth more than rubies because we never fully appreciate what counterfeit glitter Dora offers.

The most redemptive arc of the novel—the fall and recovery of Little Em’ly—is present in broad strokes, but there simply isn’t time to touch on ­Dickens’ deep, Biblical theme of Hosea pursuing his wayward wife or the prodigal’s father abandoning honor to run to his son. That would require an entire film to itself (one I’ve often longed to see).

The upside to a lighter, more candy-­colored Copperfield is it’s short, sweet, and PG enough to please all but the youngest ages. Even the villains are more amusing than threatening (especially Ben Whishaw’s sniveling, ’umble Uriah Heep, who has all the menace of a Roald Dahl illustration). Meaning, there’s little to cause nightmares or spark questions parents may not be ready to answer. While it may not have as much salt to balance out the sugar that Dickens purists might wish, this Copperfield is still a treat.