In 2011, using a simple weather balloon and some basic, off-the-shelf radio equipment, engineers at Alphabet’s research and development subsidiary, X, tried to show that balloons could provide internet and telecommunications coverage. By 2017 the technology of X’s Project Loon, as it was known, was mature enough to provide emergency internet service for hurricane-devastated Puerto Rico.

Last year Alphabet spun off Project Loon into its own division within the company, and this year Kenya’s telecommunications provider Telkom Kenya will use Alphabet’s Loon balloons to provide countrywide mobile phone service—a commercial first for Loon.

Kenya is an ideal candidate for this kind of technological challenge. Its 50 million citizens use nearly 43 million mobile phones, according to the CIA World Factbook. But outside of major cities such as Nairobi, no infrastructure exists for mobile telecommunications.

“High-altitude balloons are actually a very reasonable way to approach this problem,” Sal Candido, Loon’s head of engineering, told IEEE Spectrum. “They’re high, they cover a lot of ground, and there are no obstacles.”

According to Candido, the key technological challenge was keeping the balloons relatively stationary in the stratosphere for hundreds of days. Loon’s engineers solved this problem by developing a system to control automatically the balloon’s altitude, taking advantage of different wind directions at various altitudes. Loon’s engineers have become so good at navigating this system that the balloons to be used in the Kenyan system will be launched from Puerto Rico.

But even minor deviations in the balloons’ locations can affect coverage, so Loon developed a method for the balloons to transmit data between them using direct, high-bandwidth connections. As a result, the entire airborne system will only need ground stations in the cities, not the rural countryside.

Loon will spend the first six months of 2019 testing the system before handing it over to Telkom Kenya, according to IEEE Spectrum. 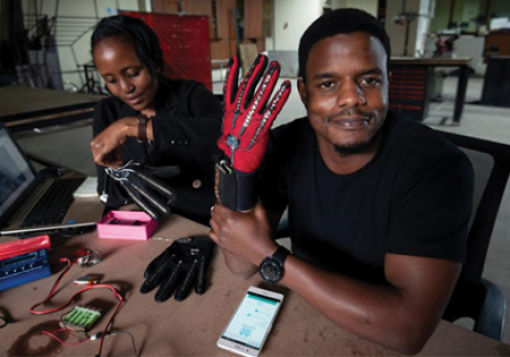 A 25-year-old Kenyan inventor has developed a pair of gloves that convert physical sign language into audible speech in real time. Roy Allela’s invention, called Sign-IO (Sign Input/Output), uses sensors embedded in gloves that read the wearer’s finger and hand gestures. The system then compares those gestures to a database derived from American Sign Language.

Allela’s niece, who was born deaf, inspired him to create the gloves.

“As she was coming of age, we found it challenging to communicate with her and understand what she was saying,” Allela told the Cape Town, South Africa, radio station CapeTalk. “As she signs, we paired the gloves with a phone via Bluetooth and the signs would be vocalized on the phone with audio on the other end.”

Allela hopes to test two prototypes of his device in special-needs schools in Kenya prior to a commercial launch. —M.C. 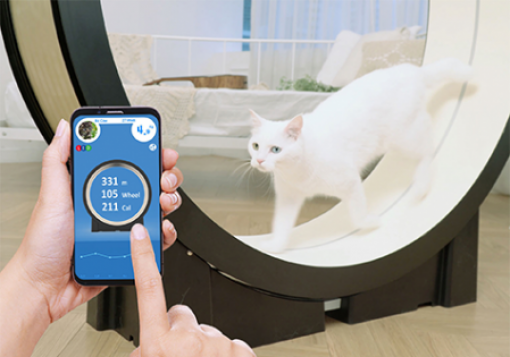 Fit for a feline

The 2019 Consumer Electronics Show in January had its share of goofy gadgets. Among them: an exercise treadmill—for cats. The Little Cat treadmill is a large ring that pet owners can set to rotate at different speeds, controlled by a smartphone app. An LED light that flickers just out of reach is designed to entice your cat to get on the treadmill and run. The app lets you watch your cat through a live camera feed when you’re not home and even records your pet’s running data like a fitness tracker. —M.C.