A year of COVID homeschooling

Parents who home educated their children for the first time during the 2020 coronavirus pandemic aren’t all diving in for a second year. But many are, and others say the experience has changed their perspective

Charlotte Wright had a beautiful plan for her first foray into homeschooling last fall.

Every morning in the kitchen of her family’s home in Fairfax County, Va., she would lead son Liam, grade four, and daughter Hailey, grade two, in the Pledge of Allegiance. Then, while she retreated to her home office, the kids would fetch workbooks from the cabinet and work at the dining table until lunch, when her husband would teach them history before an afternoon of more independent schoolwork.

That plan quickly dissolved. Waking too early left everyone grouchy, the smorgasbord of workbooks overwhelmed Wright, and hours of grading ate her weekends. So she found a cheap all-in-one curriculum on Amazon and asked her in-laws if they wanted to help.

Soon Liam and Hailey had a new routine. On Mondays, Wednesdays, and Fridays they shut their bedroom doors and worked over FaceTime with their grandparents for several hours, then finished any extra work on their own. Wright spent about $300 on equipment to boost the household WiFi. Tuesdays and Thursdays, she paid for Liam and Hailey to attend a remote learning supervision center, where a teacher guided them while helping other students navigate Zoom classes. To practice cursive, Liam and Hailey exchanged letters with their great-grandmothers.

“I outsourced homeschooling,” Wright said. “It was pretty much a win-win for all of our sanity.” 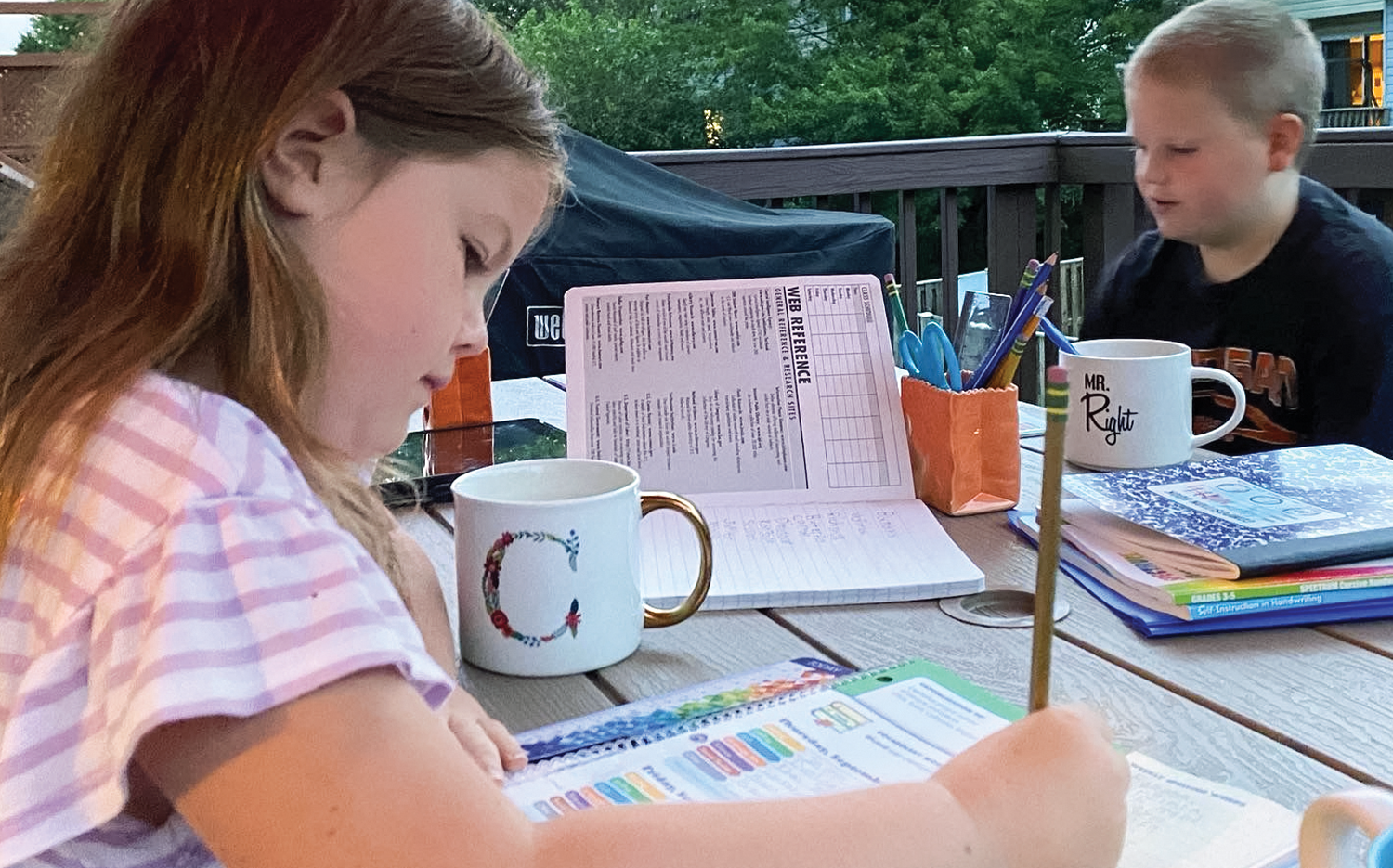 Millions of U.S. parents turned to homeschooling in 2020, nervous about COVID-19 safety and frustrated with the upheaval of switching between online, hybrid, and in-person schooling. Last summer I spoke to several of these parents, including Wright, about their makeshift schoolrooms and crisp new workbooks. 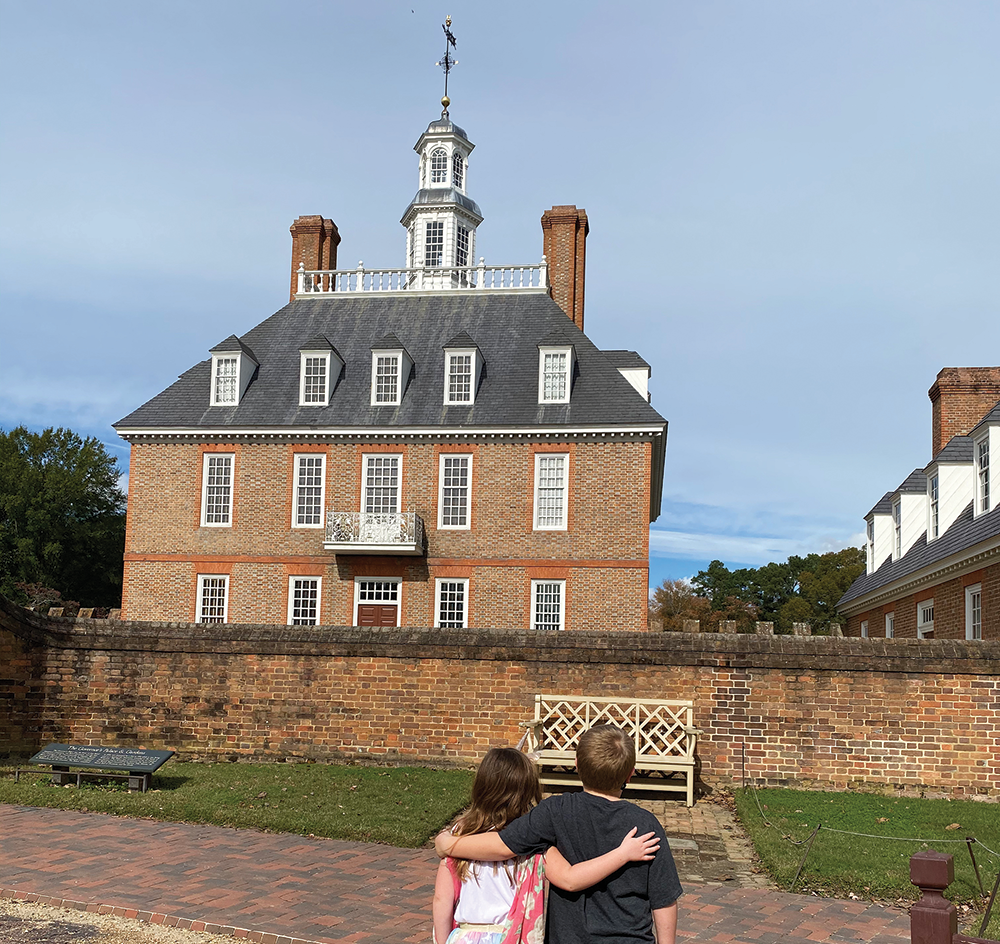 This summer I followed up: With COVID-19 less likely to disrupt public and private schools this year, will first-year homeschool parents stick with homeschooling? My interviews suggested mixed results. Some parents were relieved not to homeschool again, but others have decided to home educate for at least another year. States won’t release this fall’s official numbers on homeschooling for several months, but early enrollment at homeschooling conferences, classes, and co-ops suggests the homeschool surge will persist, at least in part.

And while the rigors of daily homeschooling have battered children’s workbooks and altered many parents’ dreams, even some returning to public or private schools say homeschooling has reshaped their perspective.

That includes Wright, who said that although the inflexibility of her job rules out another year of homeschooling her kids, she now wants to take a more proactive role in their education.

THE NUMBER OF U.S. HOMESCHOOLERS has crept upward for decades, but when COVID-19 arrived, the growth graph went from a gentle curve to a hockey stick: Homeschooling doubled from about 2.5 million students in spring 2019 to between 4.5 million and 5 million in spring 2020, according to Brian Ray, president of the National Home Education Research Institute. By fall 2020, 11 percent of households with school-age children reported homeschooling in a U.S. Census Bureau survey—and that after the bureau clarified its survey question to filter out students who were taking public or private school classes online from home.

The forced plunge into homeschooling has made some parents eager to get back into brick and mortar schools. In Austin, Texas, Mariela Freire is a full-time student and single mom of three. She didn’t technically homeschool last year, enrolling her kids in online public school. But she considered it similar to homeschooling since it still fell to her to enforce homework and keep her children motivated and focused.

Her oldest, a fifth grader, loves researching quantum physics and multiple universe theories. Before the COVID-19 outbreak, he returned from school days bursting with new facts to share. During online classes he lost focus, but he developed anxiety and depression from bullying when he tried returning to in-person school, forcing him back to online classes. Her middle child struggled to keep track of his online course schedule and threw himself on the floor to avoid logging in. This fall, they’ll attend a science- and technology-focused public charter school. When I asked if she would consider homeschooling this year, Freire wrote a two-word answer: “Heck. No.”

But other parents found traditional homeschooling worked for their families. Ashley Kluck lives in San Antonio, Texas, with her husband, two kids, and grandmother, whom she cares for full time. Her older child, 8-year-old Carson, was already getting bored and misbehaving in class as a first grader in 2020. He liked online school even less. “I had to do Zoom calls, and they were boring,” Carson said. Kluck disliked the busywork assignments teachers gave. That, plus assessments that showed Carson years ahead of his grade in most subjects, convinced Kluck and her husband they couldn’t return Carson to public school.

So they jumped into homeschooling last fall. Most homeschooling happens in their bright living room, where sunshine streams through a skylight onto their couch. Kluck started out with a curriculum that took up her weekends marking reading passages in books and making grocery trips for cooking lessons.

Then, like Wright, she switched to a simpler, all-in-one option. She supplemented it with a string of activity boxes that arrived monthly full of materials and instructions for projects—such as a science box containing a red filter, wood pieces, and a lightbulb to assemble a flashlight and study night vision. Carson learned math through computer programs featuring comic-book monsters and wizards catching animals if he solved a problem. When he struggled with fractions, Kluck found a game about aliens eating pizza that made the concept visual.

Kluck likes elements of homeschooling besides pure academics. On bad days, Carson can take a break on the backyard trampoline and try again later. They joined others from a Facebook homeschooler group to try indoor skydiving. And already Carson and his sister spend more time together and with their dad on his lunch breaks.

And there’s freedom for other types of educational activities: On a Tuesday afternoon, Carson helped his mother prep pigs in a blanket, orange chicken in foil packets, and other freezer meals. The family raises chickens and ducks, and visiting friends from Louisiana slaughtered and plucked ducks with Carson (he said he wasn’t excited to eat the resulting meat). Kluck found a local meteorologist on TikTok who invited the family to lunch and answered the kids’ weather questions.

As she teaches her kids, she sometimes worries she may inadvertently overlook a topic or forget about a historical event, but she’s convinced that a few focused hours of homeschooling per day is as productive as a day in a typical classroom setting. “We look at public school and their eight-hour days—how much of that time is spent herding cats?” she said. 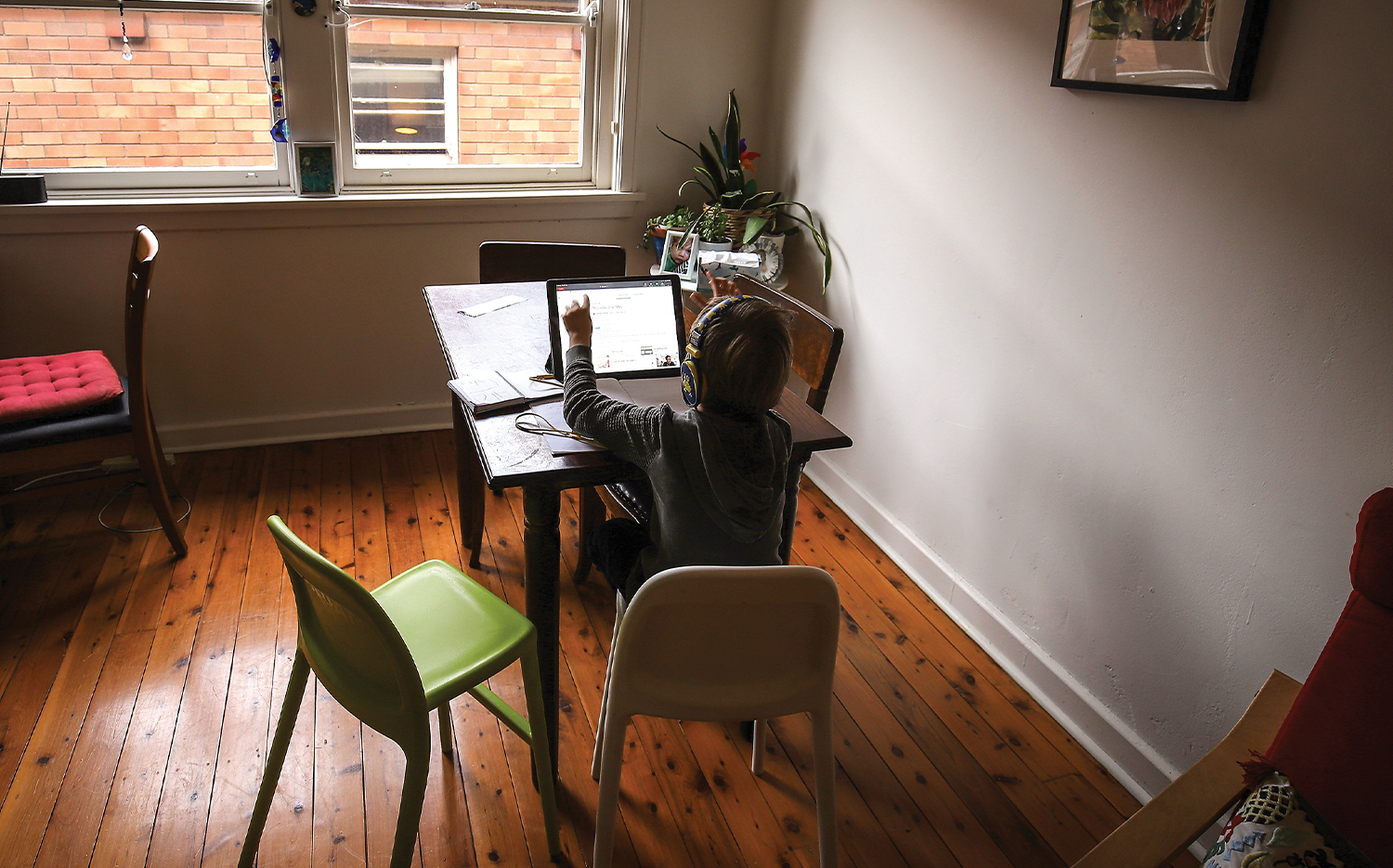 A child sits in front of his computer while homeschooling. David Gray/Getty Images

THE KLUCKS HAVE DECIDED to homeschool indefinitely. So has Naomi Mulitauaopele Tagaleo’o, a mom in Washington who started homeschooling to avoid COVID-19 exposure last year—she’s excited to continue and urged her sister-in-law to join her. Last summer, Texas parent Rachel Carothers told me she planned to homeschool her youngest child while the older two attended an online school from home. This fall she’ll homeschool two of the three.

These families aren’t alone. Homeschool group leaders report many parents have stuck around. Near Detroit, a teaching and support group called Home­school Connections enrolled 153 new students last fall, according to president Becky Thompson. By June 2021, 57 of those had reenrolled for fall, and 115 more new students had applied. In Florida, an information group called Florida Homeschooling estimated 50 percent of the state’s COVID-19 homeschoolers planned to return, and in New Hampshire, Granite State Home Educators gave a similar estimate.

Homeschool researcher Brian Ray emphasized that those anecdotal figures are an incomplete picture. But he loosely estimated the United States would have over 3 million homeschooled children in fall 2022—fewer than in 2020 but more than in pre-pandemic times.

Pandemic-driven homeschooling might also shift the role of faith in homeschooling. Previously, most homeschool parents surveyed by the National Center for Education Statistics have listed religious instruction as an important reason for homeschooling, but many of the newest homeschoolers (including some of those I interviewed) are making the switch more for health or academic reasons.

Still, Christian homeschool advocates see the growth as a chance for more parents to invest in their children’s faith. In New Mexico, the Christian Association of Parent Educators has seen enrollment spikes at conferences and new homeschooler workshops. “Let’s face it, homeschooling is not what saves our kids. Christ coming into their lives is what saves our kids,” board member Cathy Heckendorn said. “But when you have all day long to answer their questions and present the gospel to them, you at least have a greater opportunity to plant seeds.”

Even parents who return to public or private schooling have been influenced by their experience as COVID-19 homeschoolers. A Tyton Partners survey found almost 80 percent of parents wanted to be more involved in their kids’ education next year than they had been before the pandemic.

Charlotte Wright was once hesitant about home­schooling and now sees its benefits. The family took a vacation to Jamestown and Colonial Williamsburg, a historic town full of reenactors, and counted it as history class.

Homeschooling allowed Wright to accelerate Hailey’s learning by giving her homework above her grade level and to focus on improving Liam’s struggling reading skills: She required the kids to read 30 minutes a day and let them take their iPads to bed—a treat—to read another 30 minutes before lights-out. When the kids’ grandparents couldn’t do FaceTime, she declared a reading day. Together, Liam and Hailey downloaded 400 titles during the school year, racing through Lunch Lady and Dork Diaries books and maxing out Wright’s library card until she took them to get their own. (In the spring, standardized tests showed that Liam had caught up to grade level in reading.)

Wright said the long hours and conference calls required by her job rule out homeschooling again this year. But, she said, “I’m definitely going to take more of a role in their education now.” She might do that by testing them independently again so she won’t miss gaps in their learning.

Wright has two copies of the Dr. Seuss book Oh, the Places You’ll Go!, which she plans to give to Liam and Hailey at their high-school graduations. Each year, she asks their teachers to sign the books.

This year, Mom, Dad, Grandma, and Grandpa will all sign.

This is an interesting follow-up to a crazy year. It was a year ago that I read the article in World on "What does Harvard know about homeschooling?" https://wng.org/roundups/what-does-harvard-know-about-homeschooling-1617223599.

The irony was not lost on the writers last year, that a one-sided article opposed to homeschooling was published *after* practically every student America was forced to study ... at home. Now, as this article points out, the interest in homeschooling has gone through the roof.

I wonder if, by chance, Harvard might publish an article titled simply, "We were wrong. Homeschooling IS a viable educational alternative." :)