A “women’s wave” for the GOP

Democrats had to wait until a week after Election Day to hear confirmation that they secured control of the U.S. House of Representatives. The Associated Press on Tuesday night called three more House races for Democrats, giving them more than half of the 435 seats in the chamber. The current count stands 219-202.

But compared with the “blue wave” in the 2018 midterm elections—when Democrats picked up a net of 41 seats—the party now faces two years with a slimmer majority and may have only a four-seat margin.

The House results were in some ways the biggest surprise of election night: Many pollsters, including the Cook Political Report, had estimated Democrats were on track to pick up as many as 10 to 15 seats and solidify their majority.

Various factions of the Democratic caucus have wasted no time assigning blame for their party’s losses. Meanwhile, Republicans are already road-mapping how to win the chamber back completely during the 2022 midterm elections.

House Democratic leadership has so far downplayed its losses. In a Nov. 5 post-mortem election caucus call, House Speaker Nancy Pelosi, D-Calif., told her members: “We have the gavel. … We’ve lost some battles, but we’ve won the war.”

Democrats so far have flipped three House seats, one in Atlanta’s suburbs and two in North Carolina. Republicans, meanwhile, have flipped nine seats so far. In the remaining uncalled races, they currently lead in 11.

“It was the night of Republican women,” Rep. Elise Stefanik, R-N.Y., said.

Republicans in many ways have Stefanik to thank for the wave of GOP women. Last year, Stefanik launched a political action committee to bolster the chances of GOP women in their primary races. The PAC, along with several other organizations, helped boost female candidate recruitment to a new high: This year, 227 Republican women ran for the House, a 74.6 percent jump from their previous record.

In the upcoming 117th U.S. Congress, as the pro-life organization Susan B. Anthony List noted, every Republican woman in the House will be pro-life. By contrast, in the Senate, moderate GOP Sens. Lisa Murkowski and Susan Collins both support abortion rights.

“This is a resounding victory for pro-life women everywhere,” SBA List President Marjorie Dannenfelser said in a statement. “We expect when all votes are counted and the races are called, we will have a record number of pro-life women serving in the next Congress.” 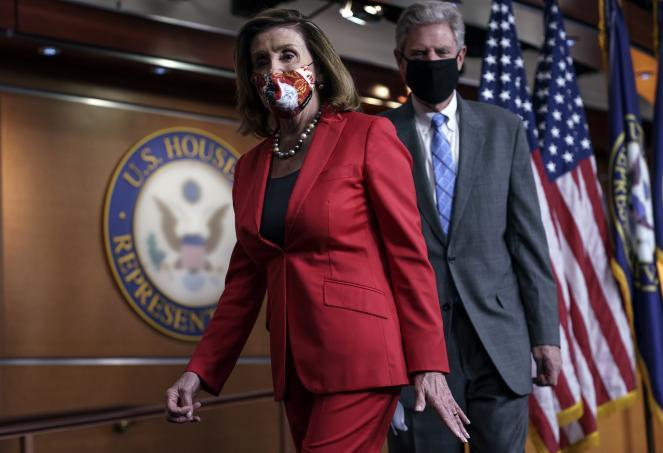 Speaker of the House Nancy Pelosi departs after briefing reporters at the Capitol in Washington on Nov. 6 about the impact of the election on the political landscape in Congress. AP Photo/J. Scott Applewhite

Democratic women were less glowing about election night. Politico reported the leaked details of an internal caucus call on Nov. 5 in which moderate Rep. Abigail Spanberger of Virginia blasted her more liberal colleagues for dragging the party down by pushing for progressive ideas. “No one should say ‘defund the police’ ever again,” she reportedly said. “Nobody should be talking about socialism.” Otherwise, she warned, Democrats would get “torn apart” in the next midterm election.

The more progressive Rep. Alexandria Ocasio-Cortez of New York returned fire publicly, tweeting that she had researched the losses of Democratic incumbents and blamed “awful execution” of digital campaigns. She even suggested that the decision to stop knocking on voters’ doors during the pandemic was a mistake.

Rep. Conor Lamb, D-Pa., came to the defense of his fellow moderates in an interview with The New York Times: “The fact is that in general elections in these districts—particularly in the ones where President Trump himself campaigns over and over and over again, and attacks members within their own Republican-leaning districts, like me and ... Representative Spanberger—it’s the message that matters. It’s not a question of door knocking, or Facebook. It matters what policies you stand for, and which ones you don’t.”

These divisions between moderate and progressive Democrats could become more visible without a common opponent in the White House against which to unite.

Meanwhile, Republicans have already begun to strategize for how they will act as a now emboldened minority.

“We will press [Democrats] hard on the floor over the next two years to set up repeated situations where their vulnerable members have to cast tough votes,” Rep. Tom Cole, R-Okla., told Politico.

Republicans have attempted to use discharge petitions—which can circumvent leadership to bring a bill to a floor vote if 218 lawmakers sign on in agreement—over the last two years. They never successfully got a discharge petition on the floor, but with their increased numbers, 218 will be an easier threshold to reach. The GOP has used another procedural tactic, “motions to recommit,” with more success. Motions to recommit allow the minority to introduce amendments to a bill on the floor. Politico noted that Republicans got at least eight motions to recommit across the finish line in the 116th Congress, some on hot-button issues like immigration and border security, while Democrats didn’t win a single motion to recommit petition while in the minority from 2011 to 2017.

House Minority Leader Kevin McCarthy, R-Calif., told The Washington Post he is confident the GOP will retake the majority in the 2022 midterms. He went as far as to describe this year’s election results as a win, even though Republicans face two more years in the minority.

“We have never been stronger in the sense of what the future holds for us,” McCarthy said. “We won this by adding more people to the party. And we won this in an atmosphere where we were the one group that everyone guaranteed we would lose.”

The 117th House of Representatives class will include several historic, demographic firsts.

Yvette Herrell, a member of the Cherokee Nation, beat a Democratic incumbent in a New Mexico district and will be the first Republican Native American woman in Congress. Democrat Cori Bush, a pastor and registered nurse, will become the first black congresswoman from Missouri.

Republican Stephanie Bice, who flipped Democratic Rep. Kendra Horn’s district in Oklahoma, will be the first Iranian American woman in Congress. Ritchie Torres and Mondaire Jones, both Democrats from New York, will be the first gay black members of Congress.