A walk on the dark side

A look at Sally Quinn’s ‘religion’

This issue lists our best books of the year, so this is an opportune time to describe the worst I read in 2017: Sally Quinn’s memoir, Finding Magic (HarperOne).

Washington Post writer Quinn, now 76, was from 1969 to 2015 one of America’s most influential journalists. She had been a go-go dancer and a social secretary for the Algerian ambassador when she met Post Executive Editor Ben Bradlee. He asked her, “Can you show me something you’ve written?” She responded, “I’ve never written anything in my life.” He said, “Nobody’s perfect. You’re hired.”

Quinn’s memoir is full of religious words. Early on, she decided to lose her virginity: “There was something sacred, holy to me about what we were doing. … It was a powerful spiritual experience.” When Bradlee committed adultery with her, she felt “so transcendent, so sacred, so divine. I had never experienced anything like it. … He was, of course, still married.” Bradlee left his wife to move in with Quinn in 1973. Five years later they married.

Quinn did not pray only at the altar of sex. She had faith—in witchcraft. She writes about putting “hexes” on three people: a beautiful woman whom her boyfriend lusted after, an editor who ran a negative cover story on her, and an astrologer who gave her a brutally negative reading. The woman committed suicide, the editor lost his magazine in a hostile takeover and came down with cancer, and the astrologer dropped dead of a cerebral hemorrhage. Quinn then felt bad, “thought for a long time about what I could do, and came up with the idea of donating money to … the American Heart Association.”

Quinn now wears two gold chains with the Hindu god Ganesh and a bracelet “with a small blue evil eye with a diamond in the center. I never take it off.” She praises Wicca and witchcraft, which she calls magic: “I believe magic is based on faith and hope. It’s like prayer … spiritual and uplifting.” 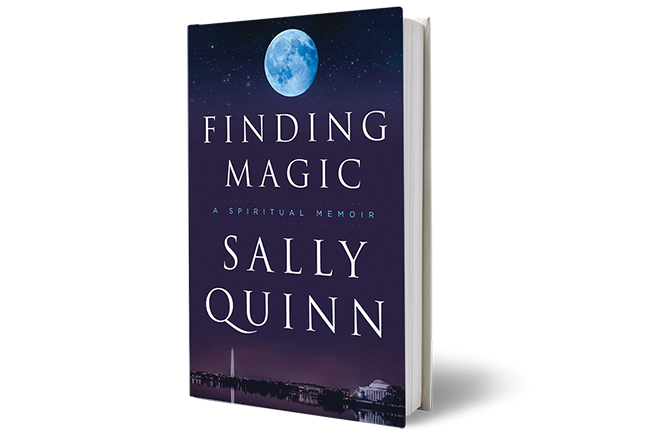 Quinn believes in necromancy: Ben Bradlee died three years ago but a medium told her, “Ben wants you to have another relationship. … Ben also said to her that he’s met some interesting people on the other side” and has talked with Richard Nixon, his Watergate adversary. Quinn takes horoscopes seriously: “If I am under the influence of Saturn (no good), I just know that I have a hard time ahead. … If I come under the influence of Venus, it’s a pretty sure thing that I will be feeling loving.”

Quinn has no love for the God of the Bible. She writes that when her son was ill she sat in a hospital chapel and “waited for God to show himself to me.” When she “felt nothing” and “heard nothing” she said “[Obscenity] you!” Parts of Washington society have reacted that way to Quinn’s latest. The Washingtonian called her “a seasoned provocateur” and snarled that Quinn, once the D.C. hostess with the mostest, had become “largely irrelevant. What better way to reinsert herself into the conversation than shaking up buttoned-down Washington by letting her spiritual freak flag fly?”

But her freakiness is becoming more common. Whenever we don’t follow the God of the Bible, we echo Quinn’s statement that “I have my own religion. I made it up.” Others say the same: One woman famous to sociologists, Sheila Larson, made up her own faith and called it “Sheilaism.” Quinn does show the childish faiths of atheists: She tells how Christopher Hitchens “confided to me” that he read his daily horoscope, while Richard Dawkins feared haunted houses and was “afraid to step on a crack for fear of breaking his mother’s back.” Some decry both theism and atheism and call themselves “spiritual.”