A view of Hong Kong from Taiwan

At a memorial in Taipei, a large photograph shows a memorial to pro-democracy protests at Hong Kong’s Prince Edward Station.. June Cheng

At 228 Peace Memorial Park in Taiwan’s capital city of Taipei, activists placed fresh flowers at a memorial erected in recognition of Hong Kong’s pro-democracy protests. A large photograph at the site listed names of Hong Kongers who have committed suicide since the protests began in June.

About 2 miles away in a pedestrian underpass near National Taiwan University, walls were covered with flyers and post-its with messages of support for Hong Kong’s protesters: “Hong Kong, Add Oil!” “Taiwan Stand With Hong Kong.” One section included Christian flyers, including photos of pastors holding hands on the front lines and a drawing of Jesus comforting a protester. These colorful “Lennon Walls” have popped up in other cities and universities in Taiwan. 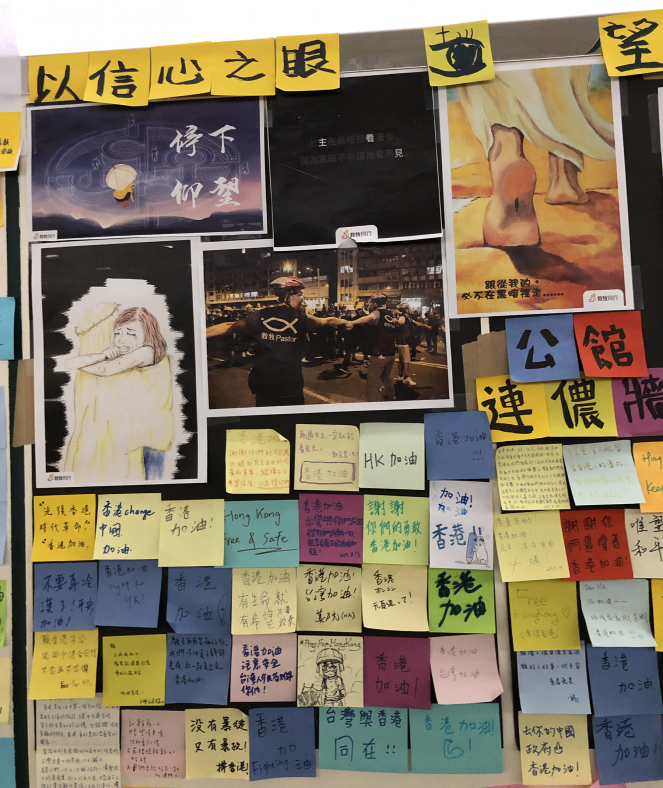 Residents of Taiwan view their future as tied to that of Hong Kong, and they are closely watching the Hong Kong protests and Beijing’s response. Taiwan, an independent island lying off the coast of China, has its own elected government, but China has long claimed Taiwan as one of its territories. Beijing has touted the “one country, two systems” framework as a way to lure Taiwan into its fold, but watching that framework fall apart in Hong Kong has led many Taiwanese to reject the idea. Even Taiwan’s Beijing-friendly Kuomintang (KMT) opposition party said it would never accept a one country, two systems policy.

The location of the memorial at 228 Peace Memorial Park is symbolic for the Taiwanese: The park commemorates the victims of the “228 massacre” that began on Feb. 28, 1947, when anti-China riots in Taiwan led to a harsh crackdown that left more than 10,000 people dead and set off nearly 40 years of martial law on the island.

In Taipei, a march to express solidarity with Hong Kong protests in late September saw 100,000 people take to the streets despite rainy weather, according to organizer estimates. Some wore hard hats and gas masks and waved flags reading “Liberate Hong Kong, Revolution of our Times,” according to The Wall Street Journal. Thousands also gathered in the cities of Hsinchu, Taichung, Tainan, and Kaohsiung.

The Hong Kong protests are relevant to Taiwan’s upcoming presidential elections in January, when President Tsai Ing-wen will seek another term. Tsai has been outspoken in her support of the Hong Kong protests, which analysts say have boosted her campaign. Currently, Tsai holds a solid lead in the polls.

Her opponent, Kaohsiung Mayor Han Kuo-yu, supports closer ties with mainland China as a way of reviving Taiwan’s economy. He is Beijing’s favored candidate. In an effort to sway the elections, the Chinese government in recent months has lured away two diplomatic allies—the Solomon Islands and Kiribati—leaving Taiwan with only 15 formal allies.

To hurt Taiwan’s tourism industry, Beijing drastically cut the number of Chinese tour groups allowed to visit Taiwan, and it barred solo travelers to the island from 47 mainland cities. The Travel Agent Association estimates this will translate into more than $1 billion in tourism losses. President Tsai has instead focused on encouraging tourism from Southeast and West Asian countries, although on average they spend less than mainland visitors, according to the South China Morning Post.

The Chinese government is also trying to attract Taiwanese talent with new incentives for Taiwanese professionals and companies, including greater access to Chinese markets such as 5G, technology, air transport, and finance.

In his speech last month commemorating the 70th anniversary of Communist China’s founding, Chinese President Xi Jinping said, “The complete reunification of the motherland is an inevitable trend,” one that “no one and no force can ever stop.”

Chang Yu-chin, a 27-year-old illustrator in Taipei, believes people in Taiwan need to think about more than just the monetary benefits of a closer relationship with China.

“I don’t think the problem is China, the problem is how to make people in Taiwan realize freedom is more important than making [more money] each month, and to value that we still have the power to choose what we want,” Chang said. “I think as long as more people are more aware of that, China can’t do much.”

The popular short-video app TikTok is owned by Chinese tech giant ByteDance. The Washington Post reports that TikTok regularly demotes and removes videos that touch on social and political topics, including topics sensitive to the Chinese government.