Amid the pandemic, college and K-12 students have continued to cross the U.S.-Mexico border for school

When she was a college freshman living part time in Mexico, Nanitzia Comparan Cuadras often crossed the border into the United States during her commute to school. As a U.S. citizen, she showed her passport to border agents; walked through a plaza crowded with currency exchange booths, workers, and street preachers; and hopped on a trolley headed to her college’s downtown campus in San Diego. Before each weekend, she headed back to Mexico.

By the time the COVID-19 pandemic hit, Comparan Cuadras had transferred schools and rented an apartment in San Diego. Then she worried the border would close, separating her from her parents. So she packed up clothes and books, moved back in with her parents in Tijuana, and resumed attending class—this time via Zoom.

Students cross the U.S.-Mexico border every school day. They’re often U.S. citizens whose parents either can’t afford U.S. housing or aren’t citizens themselves. They navigate a time-consuming commute to get an education that leads to better job opportunities in the United States. COVID-19 has added challenges and uncertainty to cross-border schooling, but it has also produced unexpected upsides for some.

No one knows the exact number of cross-border students. Norma Iglesias-­Prieto, a professor at San Diego State University, estimates from border crossing data that the San Diego–Tijuana region alone has thousands. Public schools typically require students to live in their school district, and colleges charge extra for international students, so some students stay with U.S. relatives while frequently visiting their Mexican home. Others use a relative’s U.S. address to enroll or move midyear.

In Columbus, N.M., 80 percent of Columbus Elementary School’s students come from Mexico. Their parents drop them off on the Mexican side of the border crossing around 6:30 each morning with backpacks, lunchboxes, and passports, said Principal Viridiana Chacon. Crossing guards from the school district guide students as young as 4 years old on a half-mile walk to board buses for the 10-minute ride to school.

The school and others in the Deming Public Schools district have enrolled cross-border students for decades. New Mexico allows public schools to admit students living outside their districts, and the practice has survived legal challenges. District administrators point out that their students are U.S. citizens, and that schooling is cheaper than the support services that would be necessary if they remained uneducated and unable to land jobs. In San Diego, Iglesias-Prieto argued that the problems caused by intertwined economies and cultures in border regions like San Diego–Tijuana can ultimately be best solved by well-­educated cross-border students. 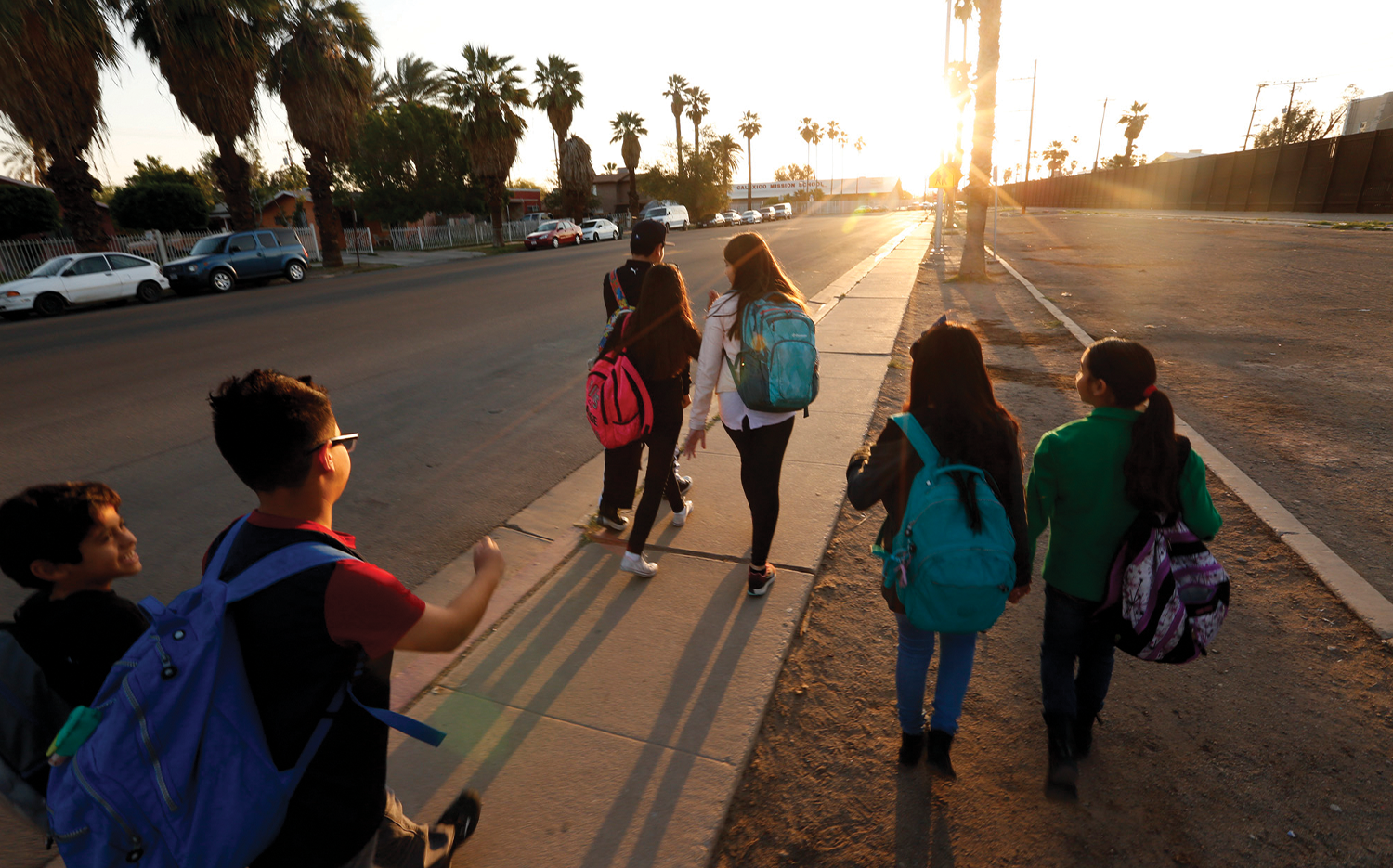 After crossing the border from Mexicali, Mexico, students make their way to school in Calexico, Calif. Genaro Molina/Los Angeles Times via Getty Images

Cross-border students do face extra hurdles, particularly during COVID-19. During online classes, border restrictions prevented parents in Mexico from crossing the border to pick up meals for their students, so Deming Public Schools got permission to deliver meals through customs. When rural Deming students in Mexico needed internet access, a business in Mexico let them use its Wi-Fi. Classes are meeting in-person again, but after a COVID-19 exposure, students need a negative test to avoid missing weeks of school in quarantine. New Mexico offers free tests nearby, but parents in Mexico drove an hour for tests costing about $80, Chacon said. Another Deming principal, Jesus Saenz, said his school emailed one mother a letter from the school nurse certifying her child needed a test, and border authorities allowed her to cross.

The pandemic has also brought some silver linings. Deming students from Mexico typically skip after-school programs, worried about getting home late. But more have participated since the programs went online for COVID-19. The district plans to keep digital options. Plus, principals have built relationships with officials in Mexico, and teachers have reached parents through WhatsApp chats—connections they hope will outlast the pandemic.

For Comparan Cuadras, now a college senior pursuing a journalism career in Washington, D.C., living cross-border inspired her research and internship choices and helped shape her perspective and career goals. She crosses less during the pandemic, but she says, “I am still a transborder individual.”

Esther is an education reporter for WORLD. She is a World Journalism Institute and Liberty University graduate and enjoys bringing her parakeets on reporting trips.