Denied U.S. entry, Iranian Christians and others are running out of options and provision in Europe

Since January we’ve closely watched the plight of about 100 Iranians invited to apply for asylum in the United States under a special U.S. law, then denied U.S. entry. The applicants—mostly Christians—remain trapped in Austria, their once-open door to America shut, and unable to return to Iran, where most have reason to fear they will face imprisonment or even execution.

We now know more about this group, thanks to a team from the Nazarene Fund that read our coverage and decided to help. The team traveled to Vienna last month, meeting with Austrian officials, church leaders, and the asylum-seekers themselves. What they learned only amplifies the needless upheaval and tragedy these Iranians continue to face.

The injustice is reflected in a lawsuit filed last month in federal district court in California on these families’ behalf. It charges officials at the Department of Homeland Security (DHS) with failing to follow the law governing their cases, and also sheds light on their plights.

Of about 108 individuals who arrived 18 months ago singly or with their families, two-thirds are Armenian or Assyrian Christians and the rest are Zoroastrians, Mandeans, or others. Most did not know one another, and are a diverse collection of families now living scattered in low-income housing throughout Vienna. Most are working age, but at least one is 8 years old and one is 74, cut off from family now living in America. About 20 need ongoing medical care, for diabetes and other chronic diseases, and aren’t receiving it. The 74-year-old grandmother is going blind due to untreated macular degeneration, and one young man is confined to a wheelchair.

In Iran, a chemical engineer in the group says he was denied work due to his religion. “Fanatical Muslims” attacked a young woman for wearing a cross. A 15-year-old and her family claim she was sexually abused and tortured by an imam in her school for refusing to convert to Islam. One young male applicant is a Muslim convert to Christianity who came to Austria from Iran on foot. The priest who blessed his marriage to an Assyrian Christian, an illegal union in Iran, is now in prison. One applicant, a father of four, has died in Vienna while waiting.

What all these have in common: Their relatives, who are legal permanent U.S. residents or citizens, applied for their asylum under the Lautenberg Amendment, a law granting special processing to specific classes of persecuted religious minorities. President Donald Trump’s executive orders on immigration and refugees did not overturn Lautenberg, and Congress has reauthorized the amendment every year, most recently on March 23.

Under Lautenberg provisions, the Austrian government issues transit visas to approved cases at the invitation of the U.S. State Department. In Vienna applicants are processed for U.S. entry—900 in 2016-17. But instead of granting the applicants U.S. visas, DHS denied admission to nearly 90 applicants “as a matter of discretion” early this year and later denied their appeals. About 20 applicants received no word on their status.

In the lawsuit filed April 18, the International Refugee Assistance Project claims DHS violated the law by not disclosing the reason for denial “to the maximum extent feasible,” as required under the Lautenberg Amendment. Without stated reasons, applicants had no way to provide evidence in appealing the denials. 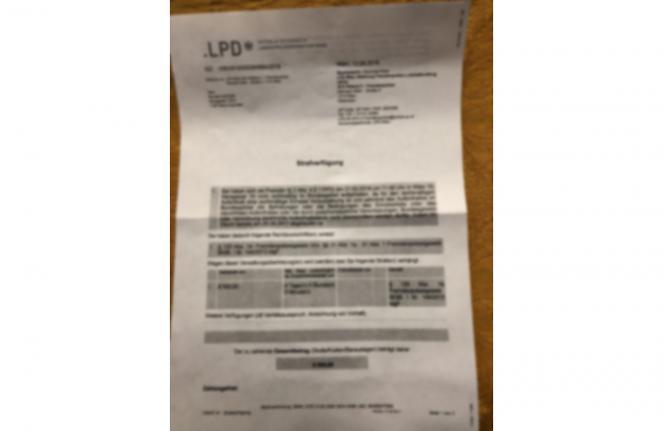 A fine issued to an Iranian refugee for overstaying a transit visa. Nazarene Fund

This leaves all the applicants in a costly limbo. Their transit visas having expired, some have received $600 fines from the Austrian government, and a few have faced threats of deportation. They receive no government assistance and cannot obtain Austrian work permits. Their U.S.-based families are trapped too, providing thousands of dollars in support. Vienna’s Catholic Cardinal Christoph Schönborn took one family into his own home after they were evicted because they couldn’t pay rent.

This leaves all the applicants in a costly limbo. … They receive no government assistance and cannot obtain Austrian work permits.

With America turning its back on the families, that leaves future support to a few Austrians and the Nazarene Fund—a nonprofit launched under the auspices of television and radio personality Glenn Beck to rescue victims of ISIS. The Lautenberg applicants “need immediate and effective support, as there is no organization or coordination of their care,” said Zeno Gamble of the Nazarene Fund, who told me his group plans to provide assistance soon.

Austrian church leaders, including members of Parliament, are working to make it possible for the families to apply for asylum in Austria, which comes with a work permit and a $995 per month stipend. But Austrians last year elected an anti-refugee government, so asylum isn’t guaranteed. And finding a home in Europe will leave them severed from extended family and extensive Armenian and Assyrian communities in the United States.

Austria, not surprisingly, has announced it will no longer grant transit visas for Lautenberg applicants, effectively ending a program that’s brought tens of thousands of persecuted religious minorities to the United States. Congress ought to take that seriously but, as one church worker in Vienna said, U.S. lawmakers “are unwilling to expend political capital to change the refugees' status or champion their cause in any meaningful way.”

The cases seemed to freeze about the time several states and refugee agencies sued the Trump administration over its executive orders banning refugees from several mainly Muslim countries, including Iran. HIAS, the U.S.-contracted resettlement agency in Vienna, is one of the plaintiffs in the case that eventually went before the Supreme Court last month. Yet legally, neither that case nor the travel bans apply to Lautenberg cases.

Trump officials informally cite new DHS protocols that came into effect under Obama—presumably vetting procedures—as the reason for the denials. But in perhaps no other way has the Trump presidency bound itself by Obama-era immigration norms.

Lacking concrete evidence these Iranians pose some security threat, the United States has an obligation to them. Failing that, the Trump administration, in effect, is working in tandem with the Iranian regime to sever non-Muslim believers from their community and their families—an irony given Trump’s anti-Iran posture.

The mangled management of the cases builds on Obama-era hostility to persecuted Christians, something Trump and Vice President Mike Pence pledged to correct. By refusing to reunite these families in the United States, a historic haven for long-targeted Assyrian and Armenian communities, and refusing to abide by the Lautenberg Amendment, they may be denying these persecuted classes not only their freedom but also their future.