A tale of two takeovers

The protesters in Myanmar even took tips from their counterparts in Hong Kong: They donned hard hats, created makeshift shields, and used Twitter hashtags to publicize the movement.

Yet since the end of February, both movements have faced major government crackdowns. In Myanmar, the military violently suppressed protesters, killing more than 120 people by March 14. In Hong Kong, Beijing-backed authorities crushed the territory’s remaining vestiges of democracy, detaining 47 pro-democracy figures and approving changes that would remove the public’s ability to freely elect lawmakers.

While protesters seem to be losing their battle in both places, they face starkly different styles of suppression—one bloody, and one legislative.

In Myanmar, also known as Burma, cell phone footage showed soldiers shooting rifles into a crowd of protesters. Young protesters carrying a bloodied, limp body as gunshots rang out in the background. Other video showed the harrowing moment a soldier tried to shoot a civilian filming from his apartment window.

One widely shared photo showed a 19-year-old protester wearing a black T-shirt with the words “Everything will be OK” while demonstrating on the streets of Mandalay. The next photo showed her lying on a stretcher, killed by a shot to the head.

At night, the authorities switched off the internet while troops roamed the streets, firing into the air and raiding the homes of protest leaders and political opponents. The military has arrested nearly 1,800 people since the Feb. 1 coup, according to the Assistance Association for Political Prisoners. 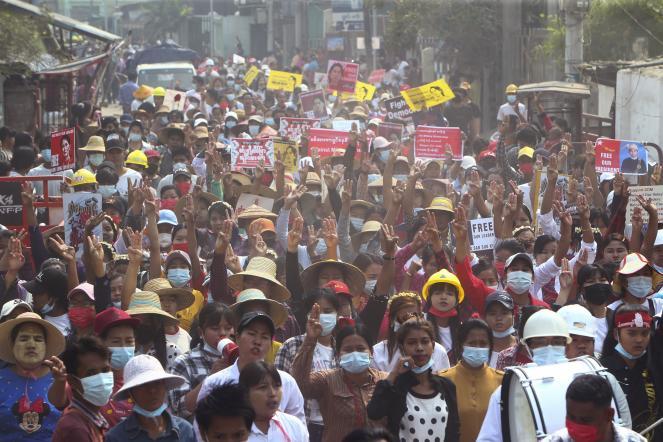 Anti-coup protesters display placards and flash a three-fingered sign of resistance on a main road during a demonstration in Mandalay, Myanmar, on Monday. AP Photo

The Myanmar military, which had controlled the country for 50 years before ceding power in the past decade, seems unperturbed by international admonishments over its recent coup. U.N. special envoy Christine Schraner Burgener reported that deputy military chief Soe Win told her, “We are used to sanctions, and we survived. ... We have to learn to walk with only few friends.”

In contrast to Myanmar, Hong Kong’s crackdown on its pro-democracy movement in the past few years has seen few fatalities at the hands of police. Instead, the central government is killing the movement by legislation and detention.

The Chinese Communist Party had promised Hong Kong 50 years of autonomy after the British handed the former territory over to China in 1997. But last July Beijing imposed a draconian national security law on Hong Kong that effectively criminalized political dissent. Some pro-democracy activists fled overseas, while others dissolved their political parties.

Protests fizzled as the government banned gatherings and delayed September’s legislative elections by one year (ostensibly due to the COVID-19 pandemic). Authorities used the new national security law to remove four opposition lawmakers from office, prompting other pro-democratic lawmakers to resign from Hong Kong’s legislature, the Legislative Council, in protest. Officials also arrested dozens of activists for their participation in the protests.

Last week, authorities charged 47 pro-democracy figures and former lawmakers with conspiracy to commit subversion for their roles in an unofficial election primary last July. Beijing still considered their actions an attempt to overthrow the government. (The top target of the arrests is Christian legal scholar Benny Tai, who spearheaded the primary as a way to ensure the pro-democratic candidates would win a majority of the seats on the Legislative Council.) If found guilty, the activists could face up to life in prison. 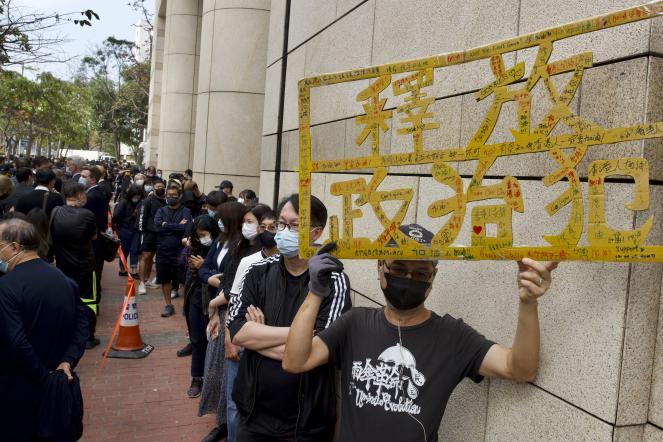 Nearly all of Hong Kong’s pro-democracy leaders are now either in prison or in exile. Still, fearing the people could elect a democratic majority, China’s central government approved a draft decision on Thursday that would effectively remove the Hong Kong people’s ability to elect their lawmakers. It changes the size and makeup of the city’s Legislative Council and the election committee that chooses the city’s top leader, and would ensure pro-Beijing figures dominate. The election committee will also directly appoint a “large share” of the Legislative Council members, and all candidates will be vetted to ensure they are sufficiently pro-China.

The move quashes any hope for a free Hong Kong, said bookseller Lam Wing-kee. Chinese authorities abducted and detained Lam for eight months in 2015 for working at a Hong Kong bookstore that sold gossipy books on Chinese politicians. In 2019 he moved to Taiwan, fearful that a proposed extradition law could send him back to Chinese prison. Today he has reopened Causeway Bay Books on the 10th floor of a building in Taipei, Taiwan’s capital city.

Lam no longer sees any way to physically “liberate Hong Kong,” quoting the democracy movement’s now-banned protest slogan. But he hopes exiled Hong Kongers—dispersed in Taiwan, the United States, Canada, and the United Kingdom—will continue to gather together and keep their culture alive by speaking Cantonese, opening yumcha restaurants, sipping Hong Kong–style coffee, printing Cantonese books, and broadcasting Cantonese shows wherever they are.

“You can’t move a place, but you can move people,” Lam said. “It’s possible to liberate Hong Kong if we don’t view it as merely a name on a map.”

—WORLD has updated this story to reflect the death toll in Myanmar’s protests as of March 14.