A stone’s throw from home

As fleeing Hong Kong protesters arrive in Taiwan, the Taipei government walks a fine line between helping them and placating Beijing

Front-line protester Lucas Yu knew after storming Hong Kong’s Legislative Council building on July 1 that he would need to flee his home of Hong Kong. Police had rounded him up at a previous protest, and he knew they would be hunting down protesters who had broken into and briefly occupied the government building. So, heeding advice shared online, Yu boarded a flight to Taiwan, which protesters view as a haven.

Arriving in Taipei, the 22-year-old college student received help with expenses from nonprofit groups and churches. Most days he had little to do except watch livestreams of protests in Hong Kong and yearn to return home. But after hearing that police had arrested his friends and searched his house, he realized he couldn’t go back. Instead he’s applied to finish college in Taiwan later this year.

Yu (WORLD changed his name for his safety) struggles with feelings of guilt and regret over abandoning his comrades in their fight for freedom. He’s been diagnosed with PTSD, and his weary eyes reveal the heavy weight upon him. “It’s hard to watch the livestreams and see others get hurt instead of you,” Yu said. “It feels too peaceful here. What I experienced and saw in Hong Kong feels like a dream.”

The protests in Hong Kong began in June in opposition to a controversial extradition bill and have resulted in more than 7,000 arrests. Protesters engaged in “riots” could face up to 10 years in prison. An estimated 200 Hong Kongers have come to Taiwan, some for a short-term break from the protests, while others like Yu would likely face jail time if they returned.

Many who had taken part in the protest suffer trauma from intense clashes with riot police. Some say they can’t sleep at night, eyes glued to their smartphones to keep up to date on events back home. C.H. Kong, who helps manage Chi-nan Presbyterian Church’s aid to protesters, recalled one girl who woke up at 2 a.m. claiming she smelled tear gas in the air.

Recently reelected President Tsai Ing-wen has repeatedly declared the democratic island’s support of the protest movement and welcomed Hong Kong protesters. Yet because Taiwan does not have a refugee law and is not part of the United Nations—so the UN refugee agency, UNHCR, can’t operate there—it can only deal with them on a case-by-case basis. So far, the government has helped 60 protesters temporarily extend their visas, according to the Reuters news service. Taiwan’s precarious political situation makes it difficult for a refugee law to pass, although some believe now is the time as the Taiwanese public strongly supports the protests.

In the government’s absence, a network of groups has sprung up to assist Hong Kong protesters in Taiwan with weekly stipends, housing, medical care, legal aid, counseling, and gatherings with other Hong Kongers. With no end in sight for the 7-month-old protests, others are thinking about long-term opportunities: opening Hong Kong businesses and Cantonese churches and creating a base for the Hong Kong democracy movement in Taiwan.

“It’s hard to watch the livestreams and see others get hurt instead of you.”

BEHIND THE HISTORIC red-brick Chi-nan Presbyterian Church, boxes of hardhats, gas masks, and goggles are stacked next to a building under construction. A black flag reads, “Liberate Hong Kong, Revolution of Our Times.” Kong said supporters had donated $500,000 worth of gear that they ship to Hong Kong to help protesters, along with cards of encouragement.

Kong said the church, led by Pastor Huang Chun-sen, first began collecting gear after holding a prayer meeting for the protests in June. Some of the young people who attended asked if they could send over motorcycle helmets to protect protesters as the clashes were becoming increasingly violent. The church posted a call for donations online and within a week received 800 helmets, Kong said.

As police violence escalated, so did the need for more protective gear: surgical face masks gave way to gas masks, air filters, and safety goggles. Wet wipes were added to help protesters wipe off stinging blue dye sprayed from water cannons. As the weather dropped in the winter, some donated long-sleeve thermal undershirts.

More than 30 protesters escaped to Taiwan after the storming of the Legislative Council, according to Apple Daily, and Chi-nan Church provided some of them with places to stay and help with medical needs. Some knew of the church because it had donated gear, while others heard of the church through other protesters. Since then, the church has helped about 100 Hong Kongers who have come to its doors.

Churches in Hong Kong have also set up a Cantonese-speaking church that meets at Chi-nan’s building. About 20-30 people attend the service, a few of whom were protesters. Around Christmas, Chi-nan held a Christmas lunch for a few dozen Hong Kongers in Taiwan.

“The Bible says you should love your neighbor,” Kong said. “Hong Kong is of course our neighbor, and they are facing persecution, so we should help them.” 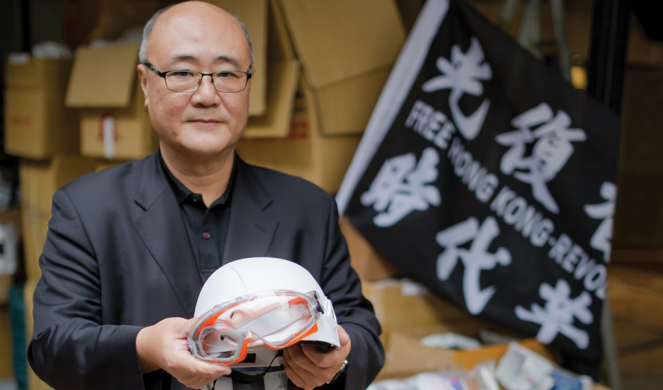 The Hong Kong protests have garnered large support from Taiwanese citizens, especially young people who see in Hong Kong a picture of Taiwan’s future should it accept China’s offer of “one country, two systems.” The fear of such a future propelled voters to reelect Tsai in the Jan. 11 presidential elections, as she has strongly rejected China’s advances and supported the protests. In July, after the first protesters began arriving in Taiwan, she said these “friends from Hong Kong will be properly treated, based on humanitarian grounds.”

Yet Taiwan still does not have a refugee law that can provide asylum to Hong Kongers in Taiwan. Instead, protesters enter Taiwan with a 30-day visa that they can extend for up to six months. After that, if they wish to stay in Taiwan, they can enroll in a local university to receive a student visa or find a job to receive a work visa. Those with means can invest $192,000 or set up a business to apply for residency.

A group of Taiwanese lawyers—TW-HK Legal Help—has provided legal aid to about 120 newly arrived Hong Kongers. The group worked with the government to grant protesters greater leeway in missing documents, as some had left in great haste, and to allow protesters to extend their visas without leaving Taiwan.

Chen Yu-fan, spokesperson for the group, says it’s moving to see Hong Kong residents send notes and clothing to the protesters in Taiwan. One handwritten note from a 70-year-old man urged the young people to be safe and study. “Don’t worry, we will take care of Hong Kong,” he wrote.

“In order to gain basic rights, they are fighting and sacrificing themselves,” Chen said. “After coming to Taiwan, they want to keep going. It’s Taiwan’s responsibility to help them.”

Still, Taiwan’s ability to help is constrained due to the lack of a refugee law. Article 18 of Taiwan’s Laws and Regulations Regarding Hong Kong and Macao Affairs states, “Necessary assistance shall be provided to Hong Kong or Macao residents whose safety and liberty are immediately threatened for political reasons.” The vague wording makes it unclear if this includes providing asylum to Hong Kongers.

Chen noted that on the plus side, this gives the current administration room to maneuver without touching on sensitive sovereignty issues with China. Yet a more Beijing-friendly government in the future could reinterpret the law, jeopardizing the safety of the Hong Kong exiles. She hopes the government can at least pass an administrative regulation to specify what Article 18 entails.

Yang Sen-hong, chairman of Taiwan Association for China Human Rights (TACHR) and a radio talk show host, believes the plight of Hong Kong protesters could finally push the government to pass a refugee law that would settle refugees in either Taiwan or a third country.

But such a law has many hurdles to overcome.

Some fear that passage of the law would bring heavy retribution from Beijing. Refugees by definition are those fleeing to another country. Would accepting refugees from Hong Kong and mainland China thus mean that Taiwan sees itself as a separate entity from China? Others argue that by opening up Taiwan to refugees, Chinese Communist spies could come over as fake refugees.

But Chen says the law wouldn’t have to apply to Hong Kong protesters or Chinese dissidents but could still help them if the government applies the law’s rules and regulations to more vague laws such as Article 18. Yang argues that the screening process would be strict and that spies could already enter through other legal avenues.

Resettled refugees could also provide a needed human resource as Taiwan, with one of the lowest birthrates in the world, faces a shrinking workforce.

AS THE DEBATE CONTINUES, some activists hope to convince Hong Kong activists targeted by Beijing to move to Taiwan and work in opposition to the Chinese regime there.

“I persuade youngsters to start over in Taiwan rather than spend years in jail,” said Andrew To, a longtime Hong Kong democracy activist. He noted that in the earlier days, activists engaging in civil disobedience went to jail to let people see how repressive mainland China was. But today, he argues, the situation has changed: Everyone can see the repression of the government and the injustice of society.

“I would tell them they don’t have to spend a day in jail to be a political prisoner, there’s no use at all,” To said. “You don’t need to awaken the people in Hong Kong. We have all woken up already.”

That’s a plan the exiled protester Yu has taken to heart, although not by choice.

Although he is stuck in Taiwan for the time being, Yu plans to help the movement any way he can, including by working with Taiwanese nongovernmental organizations to help other Hong Kong exiles and tell the world what is happening in Hong Kong. He believes he may be able to do more in Taiwan as a spokesperson even though he wishes he were back home.

“From a macro view, what we are doing is fighting against totalitarian governments,” Yu said. “Hong Kong is a small place. We can’t keep going if we don’t have other people’s support.” 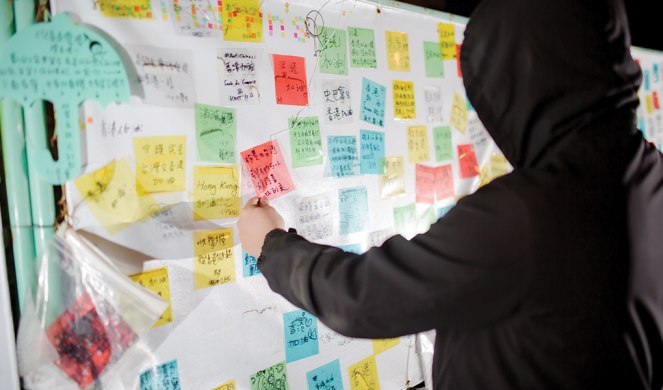