A reputation for excellence

Children play before school at ElShaddai. Photo by Max Underhill

The playground of St. Barnabas Church in Klang, Malaysia, rings with children’s shrieks and laughter. Children clad in the navy-and-white uniforms that signify ElShaddai Refugee Learning Centre arrive in shuttles to join their friends. Girls in white hijabs chat while sitting on seesaws. Groups of boys stand in circles playing a game pushing each other off-balance. Another group of girls plays jump-rope with a makeshift rope made of rubber bands as a crowd of younger students watches.

These students—all refugees, asylum-­seekers, and undocumented immigrants—come to ElShaddai for an education and future otherwise unattainable in Malaysia, which bars people like them from attending Malaysian schools. The country has an estimated 6 million foreign workers with only 2 million holding official work permits. They live on the margins of Malaysian society, taking on 3D jobs—the dirty, dangerous, and difficult—often running from conflicts or abject living conditions in their home countries.

ElShaddai’s education mission is a difficult one, and obstacles abound. It’s an openly Christian organization working with mainly Muslim refugees in a majority-Muslim country with strict laws against proselytizing. Students come from 20 different countries, including Myanmar, Indonesia, Pakistan, Somalia, Cambodia, and India. The school faces resistance from some in the Muslim community and from some Christians as well. Despite the obstacles, ElShaddai has become part of the community, reaching 1,400 students at its main campus and many subcenters.

VIETNAMESE REFUGEES flooded into Malaysia after the Vietnam War ended in 1975, but because Malaysia never signed the 1951 Refugee Convention, the UN Refugee Agency (UNHCR) worked to resettle them in the West. Malaysia treats refugees as illegal migrants, but refugees keep fleeing there to escape war and turmoil in Asia and around the world.

As the United States and other Western countries accept fewer and fewer refugees, the number of refugees stuck in limbo in Malaysia grows exponentially. Without the ability to work legally or attend schools, they work at low-skill jobs with little chance of mobility even as some stay in the country for decades. The long stay in Malaysia also leads to stateless children, as Malaysia does not provide citizenship at birth.

Malaysia’s economic prosperity in Southeast Asia also attracts large numbers of economic migrants who can make more in the country’s 3D jobs than in their impoverished hometowns. These undocumented families are the most vulnerable, since some nongovernmental organizations (NGOs) providing aid to refugees won’t help them. They face the constant fear of detention and deportation. ElShaddai, meanwhile, opens its doors to anyone who wants an education or an opportunity. 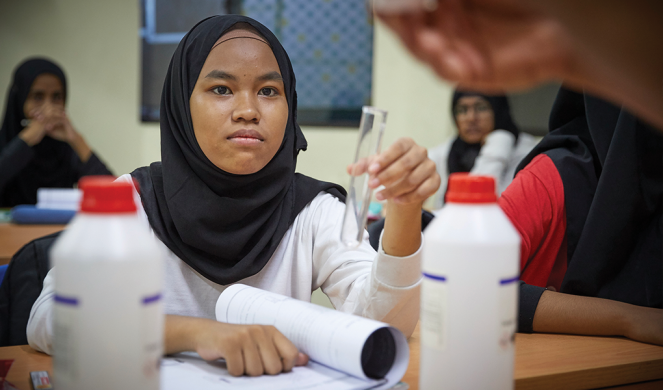 Students in classes at ElShaddai. Photo by Max Underhill

FINDING TEACHERS who understand the complicated lives of migrant children is a challenge. One solution is finding teachers who have been refugees themselves. That describes science teacher Daniel Ansumana Brima: In 1996 he fled Liberia during the country’s brutal civil war and ended up in a refugee camp in Ghana for the next 16 years. While there, he completed his education and taught at a primary school in the camp.

In 2012, he and a friend came to Kuala Lumpur and received refugee status from the UNHCR. Not knowing anyone in the country, they searched online and found Migrant Ministry Klang (MMK), a Christian group helping foreign migrants. After a series of interviews and document checks with MMK founder Andrew Ng, the organization provided them with assistance. It also offered Brima a teaching position at ElShaddai, which MMK opened in 2008 with just 22 students. By 2012 the school had grown to around 300, with the school adding a new grade each year as the students advanced.

Brima’s family soon joined him in Malaysia, and his wife also became a teacher at ElShaddai. As a refugee and the father of two students at the school, Brima understands the students in his class even when they act out: “I’m a refugee, I have gone through so many circumstances that they have gone through as well.” Even though many students are from Asia and he is from Africa, “it’s the same circumstance, the same killing, the same terror. … So when I came here, I felt I should impart the little knowledge I have to them as well.”

He’s seen students arrive with little education or exposure to English, and after just a couple of months in an English-language environment, they understand their lessons and chat happily with friends. 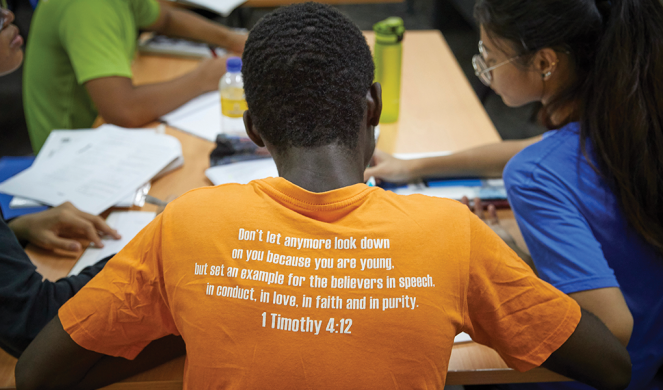 Students in classes at ElShaddai. Photo by Max Underhill

EDUCATION DIRECTOR Ng Oi Leng said that ElShaddai’s reputation has spread throughout Malaysia’s refugee communities. Now families settle in Klang because they want their children to attend the school. Parents see their neighbors’ children returning home from ElShaddai speaking English and want that education for their own kids. Demand is so high that new students have to be placed on a waitlist.

Although families are poor, they pay a small slice of tuition—about $16 per month for primary and $28 for secondary—to give them a sense of ownership in their children’s education. Scholarships help those with multiple children and those who can’t afford even the small fees. Staff members make home visits to struggling and misbehaving students to understand better what’s going on. If they sense that parents don’t value the education, they’ll expel an uncooperative student to make room for others on the waitlist.

Although several churches now open their sanctuaries for ElShaddai to use as classrooms, at first the school met only at St. Barnabas. Disagreements over whether the school was independent or a ministry of the church caused confusion and kept other churches away. But after the UNHCR endorsed ElShaddai—a status that protects the school from government raids—tensions eased. The center now collaborates with other churches, missionaries, and Christians around the country to provide funding and staffing. 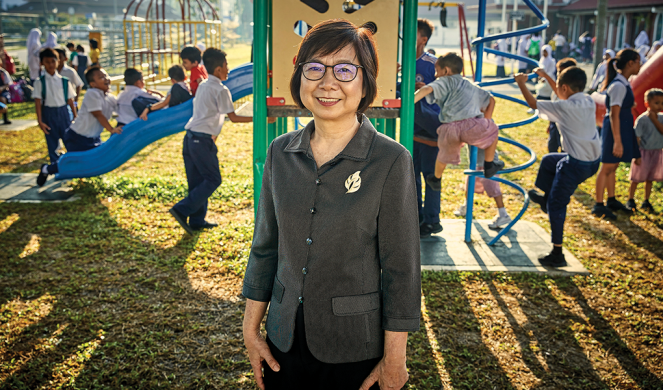 THE SIGHT OF MUSLIM STUDENTS showing up to a church every morning caused some neighbors to complain to religious officials. The authorities questioned Andrew Ng, who explained the church was the only institution willing to provide space for ElShaddai to meet. If the mosque across the street were willing to open its doors, he said, ElShaddai would be more than happy to meet there. That ended the controversy.

While some in the larger Muslim community might be suspicious, many Muslim refugee families send their children to ElShaddai, knowing they will receive a quality English education. They also receive character education with lessons on Biblical values such as integrity, honesty, and patience. Ng Oi Leng sees ElShaddai as an opportunity to show students God’s love and answer their questions. The school also offers Christians the opportunity to love those whom the larger culture disdains.

Suspicion also comes from some churches. They fear working with Muslims could get them in trouble with authorities. Others are uncomfortable working with undocumented foreigners. Still others don’t want to help because they are focused on increasing their own numbers.

Where those Christians see danger or distraction, Andrew Ng sees opportunity. God is bringing people from around the world to Malaysia with very tangible needs—and the school is the means for Christians to reach them. By building trust as educators, teachers and staffers visit their students’ families and get to know community needs and leaders. They send in medical teams to provide treatment and prenatal care for migrants with little access to healthcare.

Although the school has a reputation for its excellent English education, it has also proven itself flexible and willing to change its offerings to meet the needs of its diverse community and reach beyond its comfortable church setting.

ElShaddai staffers realized that Afghan women have little education or English-language skills, so they set up adult classes for them. They also found that many Afghan refugees are capable seamstresses, so they helped create a sewing center. During the pandemic, an NGO paid the refugees to sew masks and PPE for front-line doctors fighting the coronavirus.

THREE YEARS AGO, ElShaddai took an unusual step in order to reach more students. Instead of transporting students to St. Barnabas, feeding them, and looking for churches to offer classroom space, ElShaddai sent teachers into existing migrant-run community schools. Those schools offered rudimentary classes taught in their native languages, but they lacked qualified teachers for English and other core subjects. ElShaddai teachers have raised the educational quality and prepared students for an internationally recognized certificate. ElShaddai now has 10 of those subcenters.

A year later, the school went further. The parent of a Rohingya student was also a leader in the local Muslim community. When teachers from ElShaddai visited the family, they asked if the school could bring a medical team into that community. The Rohingya leader agreed and set it up in the Muslim religious madrassa. Seeing the available space and convenience, Andrew Ng asked if ElShaddai could bring teachers into the madrassa to teach math, science, and English so that parents wouldn’t need to send their kids all the way to the school. The leaders eagerly agreed.

In the morning, the students study the core subjects—including the character classes—with their ElShaddai teachers. In the afternoon they study the Quran with madrassa teachers. Andrew Ng says if students only learn the Quran, they are prepared only to become imams or religious police when they grow up. With a well-rounded education, their options become much broader. Currently ElShaddai is teaching in four Rohingya madrassas.

ElShaddai’s secondary school, Excel, meets a few blocks away from St. Bar­nabas in a rented space in Klang’s Little India, sandwiched between Bollywood video stores, Indian spice shops, and the blue-domed Masjid India mosque. It began in 2017 and now has 50 students.

This year, eight students plan to take their International General Certificate of Secondary Education exams to become ElShaddai’s first class of graduates, yet concern looms about what comes next. Brima’s son James is one of the eight students preparing for the test, and he worries about how James can afford university fees on their current salary.

Brima knows going back to Liberia isn’t an option even though the country is calmer than when he left. The man responsible for his parents’ death is an important figure in the Liberian army. Brima fears if he ever steps foot back in Liberia, he could be killed.

“What happened to us, we did not pray for it,” Brima said. “No refugee prays, ‘I want a catastrophe to fall on our nation so we can be a refugee.’ Every human wants to live a better life.”

Paid staff and semi-volunteers with some allowance: 138