A matter of attribution

In 2017, WORLD named as its “Series of the Year” the Reformed Expository Commentary from P&R Publishing. Various Reformed pastor-scholars authored the volumes in the series, drawing from their own sermons, and P&R plans for the series eventually to cover every book of the Bible. We praised it because we found that good editing brought out the best in the sermons without being too academic.

P&R has now withdrawn from publication the series’ commentary on the book of Acts, written by Derek W.H. Thomas, the senior pastor of First Presbyterian Church in Columbia, S.C, part of the Associate Reformed Presbyterian Church. Thomas, 66, is also a professor at Reformed Theological Seminary (RTS) in Atlanta, a teacher at Ligonier Ministries, and author of more than a dozen books.

Last October an anonymous source sent research to P&R showing Thomas’ commentary had many instances of plagiarism. The Acts commentary was based on Thomas’ sermons, which contained some word-for-word plagiarism from talks by theologian Sinclair Ferguson. Ferguson preceded Thomas as senior minister at First Presbyterian, and the two are friends.

P&R, which investigated and confirmed the plagiarism, said in a statement the problem was a result of “unclear note-taking more than a decade before the commentary on Acts was written, and we believe it does not reflect intentional misuse on the part of the author.”

P&R Vice President Ian Thompson elaborated: He said that as soon as P&R had informed Thomas of the plagiarism charge and sent him documents for a response, Thomas “immediately called back and said he did not at that time know how it had happened but that he would comply with anything that we did—in effect he threw himself on our mercy. We were impressed by the humility and contrition expressed by Derek in response to our enquiries.” Still, because of the plagiarism, the publisher removed the book from print. 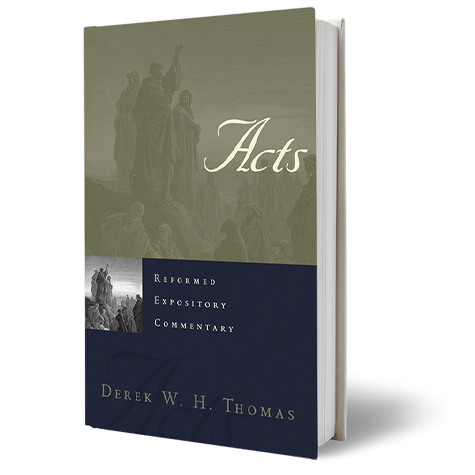 Thomas did not address the plagiarism publicly and did not return a request for comment. According to RTS Chancellor Ligon Duncan, Thomas called Ferguson as soon as he learned of the plagiarism. Ferguson read the commentary that night and “noted that he is one of the most frequently cited modern authors,” Duncan said, adding that Ferguson remains “fiercely supportive” of Thomas.

The session at First Presbyterian backed Thomas strongly in a statement of support, saying he would be exonerated from outside “attacks.” The matter is before the presbytery.

Shane Anderson, who formerly ran the blog The Daily Genevan and is an elder in the Orthodox Presbyterian Church, spotlighted the Acts incident in a series of blog posts in December. He called on Reformed circles not to give their own authors an easy pass on plagiarism, and asked for P&R to explain how it determined the Acts plagiarism was unintentional. Anderson later deleted the posts, but one read: “Instead of a concern that we clean up our own act regarding plagiarism, I’ve seen … efforts by ministers and elders to identify ‘the source’ who first reported the plagiarism to P&R [and] efforts to get me to take down the public call for an explanation.”

Anderson denied he was the source who revealed the plagiarism to P&R. “I have nothing but admiration for Thomas,” he told me, noting that the Alliance of Confessing Evangelicals, a group Thomas was involved in, was critical of pastor Mark Driscoll, whose 1 and 2 Peter study guide was found to contain plagiarism in 2013. “We have to hold ourselves to the same standard.”

In February, Duncan sent an email to the First Presbyterian session and the local presbytery, reporting that an RTS committee reviewing the Acts incident had cleared Thomas of “any knowing and intentional plagiarism.” He added that Thomas will continue to teach.

“From the standpoint of RTS,” Duncan wrote, “the case is now closed.”