A humorous look at faith and family

When the Ackerman family’s pastor encourages his congregation to attend family camp, wife Grace (Leigh-Allyn Baker) becomes convinced going to camp could save her struggling family. Her husband Tommy (Woodard) has his doubts. Tommy’s work consumes him, but he agrees to take the family to make Grace happy. Camp isn’t the restful retreat everyone hoped for because the Ackermans bunk with the eccentric Sanders family. Eddie (James), the father, is an overachieving chiropractor given to public exhibits of piety, and his family has won the camp cup two years in a row. Tommy and Eddie compete in a misguided attempt to show their wives what great men they can be.

The film doesn’t break new ground in storytelling. Much of the plot is reminiscent of Steve Martin’s Cheaper by the Dozen 2. We see two out-of-touch dads engage in funny one-upmanship, and the odd couple will need to rely on each other to survive their week at camp. In the end, everyone learns a lesson. Dad humor abounds.

The film’s subtext gently critiques two varieties of fathers who aren’t getting the job done. On the one hand, we have Tommy, who believes financial provision is a father’s only role. He has abdicated other responsibilities to his wife. On the other hand, we have Eddie, who as head of the household sees it as his responsibility to micromanage those under his care.

What makes the film somewhat original is its comedy focuses on its intended Christian audience. Many viewers will find themselves chuckling at the continuous references to the evangelical subculture. The film pokes fun at Christian obsessions with Bible diets, essential oils, and Chick-fil-A. None of the mockery feels mean-spirited—it’s a funny acknowledgment of the quirkiness we sometimes see in our churches. Viewers who haven’t spent time in these Christian circles won’t find the film as amusing. 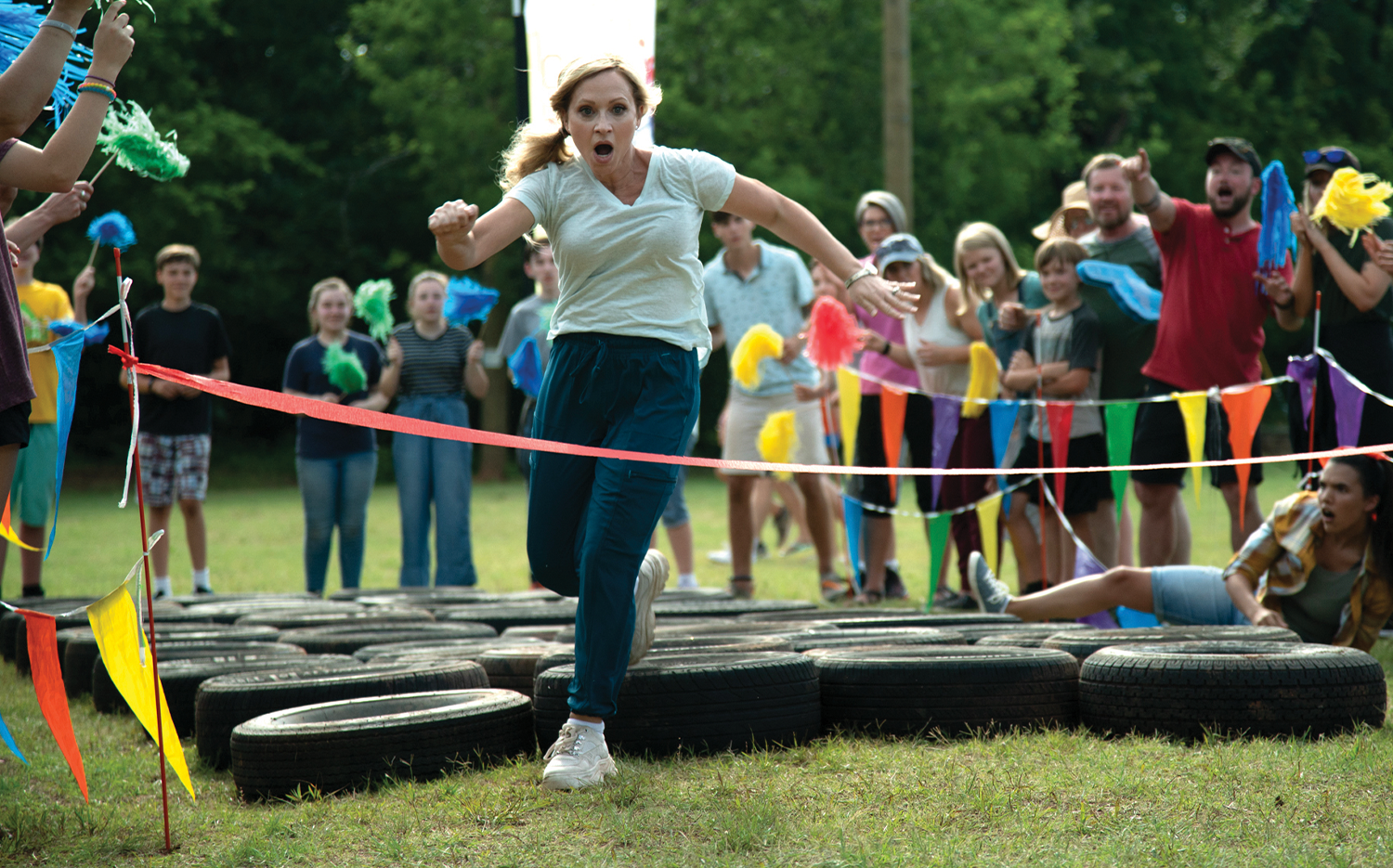 Combining a Christian message and comedy can be tricky, and Family Camp could have been a stronger movie if it offered a clean, funny, positive message about the importance of family and merely situated the story at a church camp. When the script tries to engage too deeply with spiritual questions, the answers get muddy.

How do you put the gospel—a message about Jesus Christ’s spiritual redemption of a people accomplished through sacrifice and resurrection—into a farce about an odd couple competing in camp games? The comedy might trivialize the message.

The filmmakers talk around the gospel rather than state it plainly. The movie remains overtly Christian, but it risks allowing viewers to import a soft prosperity gospel. In Family Camp, Christianity isn’t as much about redeeming the church as it is about having good relationships. Strong marriages and good parenting are important, but they’re not the gospel.

The script is at its weakest when it tries to layer Christian spirituality over its family-focused message. In one scene, a wife quotes the first half of Ephesians 5:25 to her husband, explaining he’s supposed to love her as Christ loved the church. She doesn’t mention the second half of the verse where Paul explains what he means. Instead, she says, “God doesn’t control us. He doesn’t make all the decisions for us. He doesn’t take away our voice.”

Regardless of one’s position on the issue of free will, this explanation fails to account for Paul’s meaning. I’m sure real church camps are full of lay people offering up dubious interpretations of the Bible, but the prominent scene gives the film a man-centered theology.

Family Camp is a fairly entertaining family-friendly comedy. Just don’t look to this movie for your Bible teaching. That’s what your church is for.