The holiday season is a time for extended family reunions. A huge one came earlier this year for Japanese Americans smiling and embracing in the Holiday Inn lobby here. From the lobby’s leather couch, 90-year-old Bacon Sakatani gazed at the gathering from under bushy gray eyebrows and a Korean War veteran’s cap. His wrinkled skin, stretched over high cheekbones, crinkled with the smile of a thankful grandfather watching his loved ones gather.

Sakatani, though, said the reason for this Heart Mountain Pilgrimage was not a happy one: “We went through an injustice together.” For decades he has spurred efforts to bring Japanese Americans back to where the federal government incarcerated them from 1942 to 1945. Now, for two days each year, about 400 former Japanese American incarcerees and their families and friends gather in northwestern Wyoming to pass on their stories and teach younger generations what resilience looks like.

In 1941, Bacon Sakatani, age 12, hoped to buy a new bike like other boys at school. Sakatani’s parents and four siblings lived on a small rented farm near Los Angeles where they grew cauliflower, cantaloupes, and onions. He vividly remembers Japan’s attack on Pearl Harbor and what came next: The FBI arrested Sakatani’s father along with 6,600 other “high risk” Japanese Americans the government suspected could be loyal to the emperor of Japan. Sakatani’s older brother dropped out of high school to run the farm in their father’s absence.

Ten weeks later, on Feb. 19, 1942, President Franklin D. Roosevelt signed an executive order authorizing the military removal of Japanese Americans from a West Coast military exclusion zone. The new War Relocation Authority made plans to move 120,000 Japanese Americans to 10 hastily built camps scattered throughout the West. Families could only bring what they could carry. 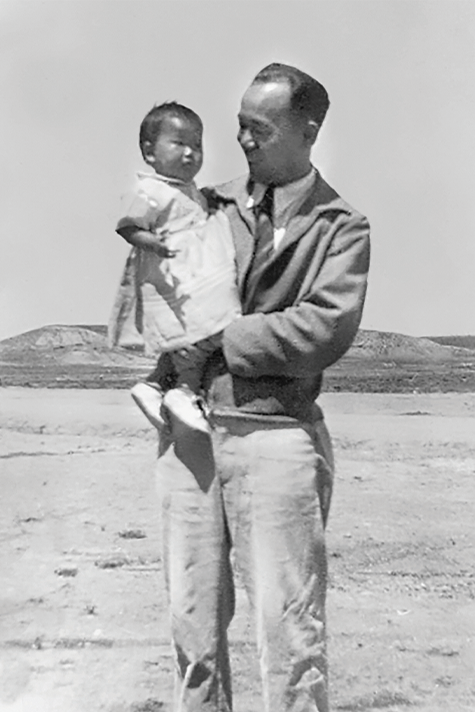 Bacon Sakatani filled his suitcase with clothes, blankets, and a baseball glove. He helped his mother put the family furniture into their landlord’s shed. After a three-month stay at a local detention center, the Sakatani family traveled four days by train to the Heart Mountain Relocation Center, named for the mountain topped with a cardiac-shaped rock.

Other families also arrived. Brothers Sam and Nobuo Mihara, 9 and 10, had lived in San Francisco’s Japantown neighborhood. Sam Mihara remembers his father dragging collections of Japanese films from their basement and burning them: “He kept saying, we can’t have anything Japanese around here.” Norman Mineta, 10, had lived in San Jose, where his parents ran an insurance business. He watched his father cry on Dec. 7 because “he couldn’t understand why the land of his birth was attacking the land of his heart.”

Bacon Sakatani can still recall his camp “address:” Barrack 22, Room E. “We were told to call our rooms ‘apartments.’” Size of the rooms depended on family size. Because the Army had built the entire camp in just 60 days, the buildings were poorly constructed and insulated. Plaster boards separated rooms but didn’t go all the way to the ceiling, leaving little privacy. A potbellied stove, a single lightbulb, and Army cots with two blankets per person furnished the rooms.

The camp had 20 occupied blocks, each with 24 barracks. Each barrack housed six families in six one-room “apartments.” Every half-block had a cafeteria, laundry room, latrines, and a shower room shared by about 250 people.

Days began around 7 a.m. with ringing bells that announced breakfast. Children attended camp schools while adults worked as cooks, janitors, teachers, and nurses. Some worked in the camp’s garment factory or in the vegetable fields. 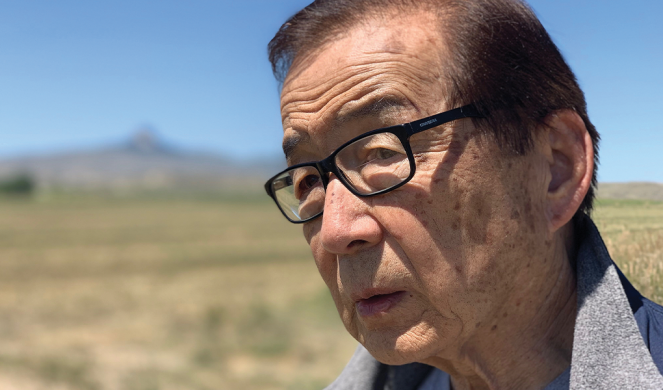 Used to the temperate Coast, internees had to adjust to Wyoming’s searing summer temperatures and freezing winters. The wildlife was also foreign. Nine-year-old Shigeru “Shig” Yabu, from San Francisco, spent his first day at Heart Mountain exploring the barbed wire fence around the camp’s perimeter. Yabu noticed a bug that he felt sure would be his pet, until it tried to sting him with its tail. He quickly learned to stay clear of scorpions.

After several months, camp guards relaxed the rules, and hundreds of people could leave camp boundaries in their free time to swim in the Shoshone River, hike, or eventually go into nearby Cody to shop. Inside the camp, children played baseball, marbles, and capture the flag. In the winter, adults flooded a rectangular mound with water to make an ice rink. To combat gang formation, camp leaders organized Boy and Girl Scouts and music bands.

While children played, life for adults was stressful. They had left businesses, land, and possessions. Many were bored and hopeless. Life in close quarters was hard on individual family life. Bacon Sakatani remembers the lack of a family dinner table. “The family life broke up at the mess hall.”

Sometimes medical care in the camp was inadequate. Sam and Nobuo Mihara’s father suffered from glaucoma before coming to Heart Mountain: Without any specialist in the camp, he went blind. Their grandfather did not receive proper medical care and died of colon cancer.

But life for most went on, and 550 babies were born in the camp hospital. Kathy Yuille was one of them. In 1943, her mother walked a mile and a half from her barracks to the camp hospital to give birth. Unlike her older siblings born in San Francisco, Yuille has just one baby picture. 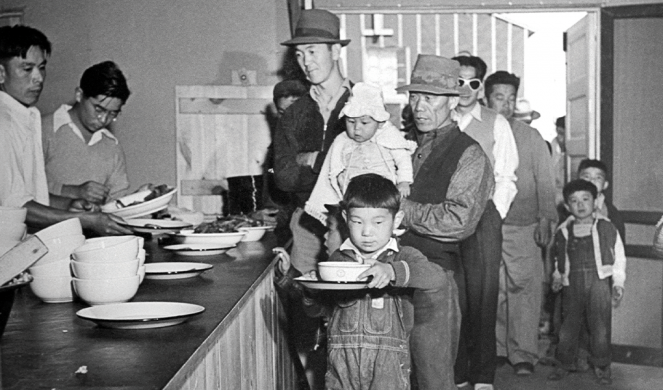 Japanese Americans lining up for meals in the camp. National Archives and Records Administration Collection

On Dec. 18, 1944, the Supreme Court ruled in Ex parte Endo that the War Relocation Authority had “no authority to subject citizens who are concededly loyal” to military removal. The decision meant the U.S. government could not continue to detain Japanese American citizens not convicted of any crime.

Throughout 1945, Japanese American families left the camps. After living in tightknit communities for nearly three years, heading into the unknown was hard: After the camp, internee suicide rates were twice the national average. Sam and Nobuo Mihara’s parents feared ongoing discrimination against Japanese Americans in San Francisco, so they opened a bookshop in Salt Lake City. It eventually failed, and they returned to San Francisco.

Bacon Sakatani went to Idaho with his family to pick potatoes. When the snow came, the family returned to California and lived in an Army tent in their former landlord’s backyard before moving into an old farmhouse. In their absence, their landlord had rented his farmland to someone else, so Sakatani’s father—with no farm equipment and hardly any money—began the process of slowly finding new land to farm.

Shigeru Yabu’s family returned to San Francisco and lived in a condemned church for six months before moving into an apartment with another family. Yabu says it quickly became clear to him that he shouldn’t discuss Heart Mountain. In a high-school English assignment, Yabu wrote about his time at the camp, but the teacher told him she “did not ever” want to hear about it.

Children and grandchildren, though, have pushed their elders to break the silence. Shirley Ann Higuchi’s parents met at Heart Mountain as children, bumped into each other years later at the University of California, Berkeley, fell in love, and married. But all Higuchi heard from her mother was that her parents had met at Heart Mountain and it was “not that bad of a place.” 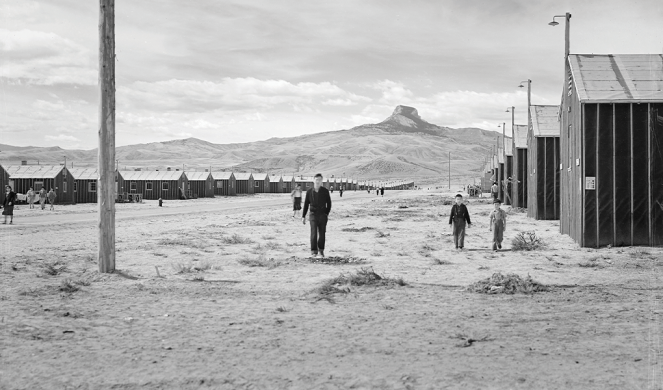 After her mother died in 2005, Higuchi began digging for answers at the National Archives. She read her parents’ relocation files and learned about her mother’s 14-day hospital stay after a difficult appendix removal. From family members, she learned that in the removal panic her grandparents sold 14 acres of farmland in what is now Silicon Valley, a decision that haunted them until their deaths.

Higuchi also discovered that her mother had sent money to the Heart Mountain Wyoming Foundation with the dream of purchasing land for a Heart Mountain museum. Higuchi now chairs that foundation. It sponsors the annual Heart Mountain Pilgrimage, opened the long-dreamed-of museum in 2011, and maintains the camp’s building remnants: a hospital boiler house, two hospital buildings, an administrative building, and a guard tower. The foundation is also restoring an original wartime barracks.

After leaving Heart Mountain, Shigeru Yabu served in the Korean War, married, and raised three sons. He spent 28 years directing Boys and Girls Clubs in California. After his grandson’s fourth grade teacher asked him to share his war years’ experience, Yabu started talking about Heart Mountain. In 2007, he published Hello, Maggie!, a children’s book about his pet magpie in the camp.

Norman Mineta entered politics and represented his San Jose district in Congress from 1975 to 1997. He led the successful push for what became the Civil Liberties Act of 1988, which gave 100,000 Japanese Americans about $43,000 each (in 2019 dollars). Mineta later served in the cabinets of Presidents Bill Clinton and George W. Bush.

Nobuo Mihara opened a Japanese origami shop in San Francisco. Sam Mihara became a rocket engineer at Boeing. At the request of the Department of Justice, he’s spending his retirement traveling the country educating students about the injustice his people suffered.

Sam Mihara never wanted to return to Heart Mountain, but he finally came and saw how the camp’s once dusty, sagebrush-coated grounds are now irrigated fields. In Cody, where Mihara remembered shop window signs warning “No Japs,” he now saw a different message: “Every store window had signs of ‘Welcome Japanese Americans.’ I’ll never forget that.”

Bacon Sakatani fought in the Korean War. Later, he opened a produce market and eventually became a computer programmer. He married, raised three daughters, and now has seven grandchildren and two great-grandchildren.

Sakatani says he struggled with anger over the treatment of Japanese Americans later in life. At times, he’s still angry, but the federal government’s apology to Japanese Americans helped: “I could feel it within my own body. … Something happened that made me feel better.” Now, it helps when people see his veteran hat and thank him for his service.

Sakatani says the pilgrimage each year leaves his heart filled with pride for the friends he met at Heart Mountain and for what they overcame: “We rebuilt our lives. We led a good life.”