A growing revolt in Myanmar

In the city of Naypyitaw on Saturday, Myanmar’s military junta celebrated Armed Forces Day, a holiday marking the beginning of Myanmar’s revolt against Japanese occupation during World War II. The weekend celebration came with a parade, a speech by coup leader Gen. Min Aung Hlaing, and a lavish dinner party.

Meanwhile, across the country, soldiers and police shot largely defenseless anti-coup protesters and bystanders—including children—killing 100 people in the country’s deadliest day since the military’s Feb. 1 takeover.

The day also marked a major escalation of violence in another conflict in Myanmar: the military’s ongoing fighting with local ethnic groups. In the ethnic Karen region in eastern Myanmar, villagers in Day Pu Noh Valley in Papun District noticed a military fighter jet flying overhead in the afternoon. That night, the military dropped bombs on the village—the first airstrikes in the region in 20 years—killing three people and wounding eight. The district is held by the armed Brigade 5 forces of the Karen National Union (KNU), a leading political body representing the ethnic group.

Saw Aye Lay Htoo, 27, was holding his 2-year-old son in his lap when the bomb hit, according to Christian aid group Free Burma Rangers. The father died instantly while pieces of shrapnel cut the right side of his child’s face. Villagers grabbed their children and belongings and fled to the jungle, finding shelter in caves and rock crevices as the Free Burma Rangers tended to the wounded, provided rice, and passed out tarps.

The bombings mark a renewed effort by the military to exert control in ethnic regions that have long insisted on self-rule. The coup and military aggression prompted some ethnic groups to unite in support of protesters and against the ruling regime, with some calling for a new federal army. 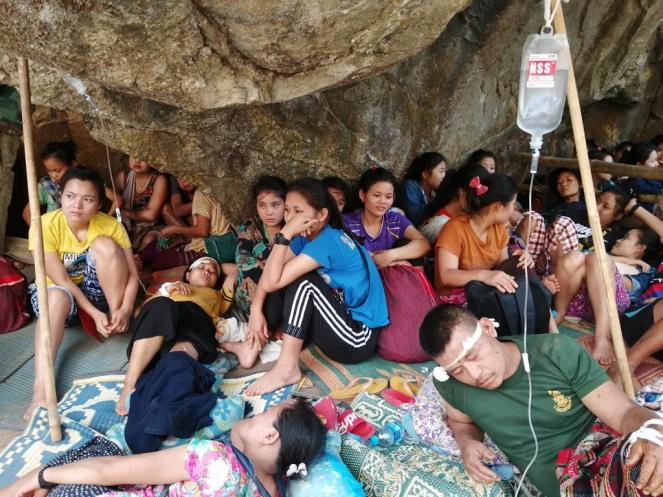 Since Saturday, daily airstrikes have continued across Karen state, hitting KNU’s military camps, villager homes, and a school. The attacks have displaced more than 20,000 people, and about 3,000 fled across the border to Thailand seeking refuge.

“The gloves are off now,” Free Burma Ranger’s Dave Eubank said of the military’s escalation. “There’s no need to have a façade of democracy anymore, [the military] felt the cease-fires were not working in controlling the ethnic groups, so now they are doing what they were going to do all along.”

The airstrikes are likely in response to the Karen forces’ attack on a military outpost earlier on Saturday that killed 10—including a lieutenant colonel—and led to the capture of eight others. Fighting in Karen state has increased since late December, when government troops began constructing roads and building camps in violation of a cease-fire. Eubank noted the night raids, which he had never seen before, pointed to the military’s increased capabilities. 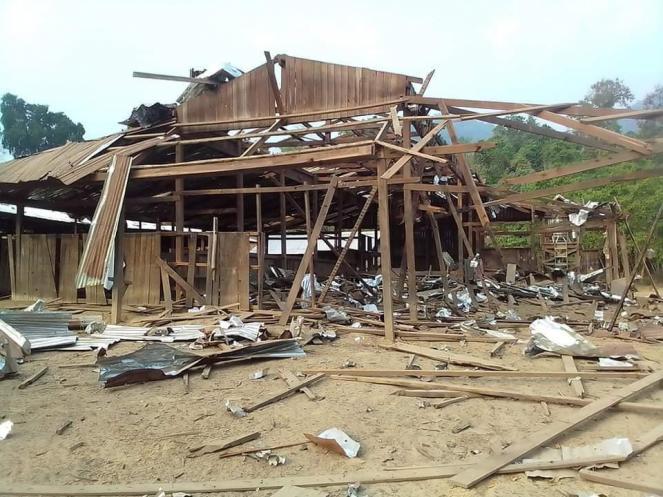 Of the 3,000 Karen refugees who crossed the Salween River into Thailand, most have been forced to return to Myanmar, according to Karen groups. Thai villagers took the injured—including people with infected shrapnel wounds and a 15-year-old boy with a broken rib and collapsed lung, according to news agency AFP—to hospitals for medical care. Thailand Prime Minister Prayuth Chan-ocha said the other refugees agreed to return when asked. He added Thailand would shelter refugees should the violence escalate. Currently around 100,000 mostly Karen and Karenni refugees live in camps by the Myanmar border. 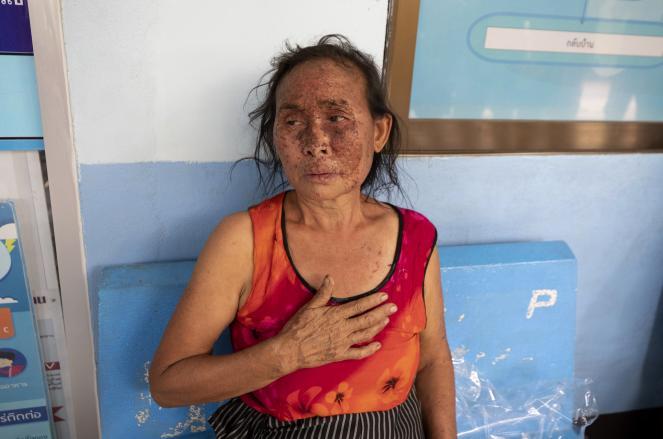 An injured Karen villager from Myanmar rests at Ban Mae Sam Laep Health Center in northern Thailand on Tuesday after crossing the Salawin River on a boat. AP Photo/Sakchai Lalit

The fighting is bound to intensify as airstrikes continue in northern Karen state along with ground and mortar attacks in south-central Karen state, according to Eubank. One of KNU’s armed units issued a statement saying “military ground troops are advancing into our territories from all fronts” and vowed to respond.

In Kachin state in northern Myanmar, ethnic Kachin guerrillas attacked a police outpost early Wednesday, seizing weapons and supplies and wounding one police officer, according to local media. The Kachins’ armed forces have also fought with the military after the government troops attacked four Kachin outposts.

Ethnic conflicts in Myanmar aren’t new: Ethnic groups have fought for greater autonomy since the country, then called Burma, gained independence in 1948. Yet many hope the current situation will be different. The military’s brazen takeover on Feb. 1 and the subsequent bloody crackdown on protesters and Civil Disobedience Movement (CDM) participants have united disparate groups against a common enemy—the Myanmar army, also known as the Tatmadaw. As of Tuesday, at least 521 people had died and 2,608 were detained since the coup began, according to the Assistance Association for Political Prisoners.

While ethnic groups were deeply disappointed by the civilian government led by Aung San Suu Kyi, a dozen ethnic groups have now vowed to support the anti-coup protesters. The Three Brothers Alliance, representing the armies of ethnic Rakhine, Kokang, and Ta-ang peoples, pledged to abandon a cease-fire if the military continued to kill protesters. The KNU and other ethnic armed groups are sheltering more than 1,000 members of the anti-coup resistance who have fled arrest, providing them with food and medical support.

The Committee Representing Pyidaungsu Hluttaw, the civilian government in exile, has also embraced ethnic groups in their vision of Myanmar’s future. Dr. Sasa, the committee’s international envoy, called for a federal government that included ethnic groups who had been sidelined in the previous government, as well as the formation of a federal army that would bring together the different ethnic armed groups and the majority Burmans to combat the Tatmadaw.

“If [the international community] fails to take action, of course unavoidable all-out civil war and more bloody days and more bloody weeks and more bloody months await ahead of us,” Sasa told Reuters. “Having a federal army becomes a must and it’s the way we achieve democracy and freedom.” 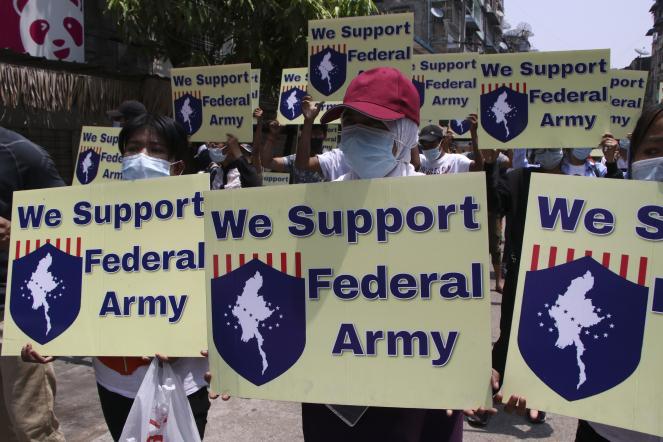 Anti-coup protesters hold signs during a demonstration in Yangon on Wednesday. AP Photo

The creation of a federal army would face enormous challenges. The ethnic armed groups have differing interests and at times fight one another. Eubank said the coordination of such an army would require outside support—or the defection of large numbers of armed Tatmadaw soldiers. Still, he is encouraged to see more Burman people caring for ethnic groups.

For instance, 21-year-old Eant Phone Aung, who has been protesting on the streets of Yangon nearly every day for the past two months, said that in the past he was blind to what was happening to ethnic groups in his country. As a majority Burman living in a major city, he didn’t know what to believe about what was happening in the far-away border regions. But after experiencing the brutality of the Tatmadaw firsthand, he said, he can empathize with the ethnic groups’ suffering.

When Aung first started joining in the protest in early February, massive crowds gathered on main streets, calling for democracy. After security forces started firing bullets at protesters at the end of February, numbers dwindled. Instead of gathering in public areas, they built barricades in their neighborhoods, defending themselves with Molotov cocktails and scattering into familiar alleyways to escape arrest.

Aung, who studied business English in college last year before COVID-19 closed schools, noted many young people had been traumatized from seeing civilian blood on the streets as well as in videos and photos online. Aung himself feels survivor’s guilt when he hears news of people being murdered by the military. Despite the risk, he attends protests because he feels the military has snatched away his future. “Unlike the older generation, our generation … experienced the essence of freedom of democracy for 10 years,” Aung said. “I don’t want to go back to the situation our country was in when I was young.”

Aung said he and the other young protesters are ready to join a federal army to defend their country with more than homemade weapons.

In the jungles of Myanmar, protesters, activists, and CDM workers are already learning the basics of warfare—how to use rifles, hand grenades, and firebombs—in weeklong boot camps, according to The New York Times.

The KNU has helped members of the opposition government, activists, and protesters escape from the cities into the jungle, providing protection from arrest. Supporters of the movement send funds to feed the exiles. Free Burma Rangers is helping train anti-coup protesters in emergency medical care, information collection, and communications to prepare them for what is yet to come.

“I have no idea what will happen, but what I do feel is things have gotten much worse and there will be more killing,” Eubank said. “But the Burma military has bitten off more than it can chew. … If the ethnics and the civilians can hang on, they can outlast this. That’s our hope.”

—WORLD has updated this story to reflect estimates of the number of displaced Karen people as of April 1.