A flood of harassment cases reminds us that sex is sacred and transgression is costly. Yet even in a fallen world, faithful men and women can treat one another with honor

Apparently sex isn’t for kicks anymore. From the halls of East Coast academic institutions to the malls of mid-America and the West Coast backlots, for decades now sex for sport has been taught, modeled, and marketed. Serial sex partners; sex outside of marriage; sex as an initiation rite onscreen, on campus, and to get ahead seemed a norm we could live with. The sexually pure became oddballs and losers. When comedian Louis C.K.’s show Louie featured the character Ellen Farber, a Christian virgin, it was all for laughs. And audiences did.

Then the tables turned abruptly this year, and sex became sobering front-page business as accounts of office intimidation, sexual assignations, sodomy, and even rape felled in swift succession titans of entertainment, politics, journalism, and business.

By one count accusations of sexual misconduct hit 36 men in high-powered positions during the six weeks following the October downfall of Hollywood producer Harvey Weinstein. Like Weinstein, many of them took swift leaves of absence or faced suspension or outright firing. In Los Angeles, New York, Scotland Yard, and elsewhere, authorities launched criminal investigations into the most egregious cases.

Sexual harassment or assault claims extend beyond elite circles. Within 24 hours of a #metoo post by a young mom on Twitter, 53,000 people made Facebook and Twitter entries under that hashtag noting their own experiences of harassment or worse. Hiding behind the glamour of sexual freedom, it appears, lurks a pathological bent toward using it to intimidate—often with steady blows to the conscience, sometimes with outright violence.

Reports of misconduct in state legislatures also sprang up. In Kentucky, state House Speaker Jeff Hoover stepped down over a sexual harassment settlement with a female member of his staff. In Massachusetts, Senate President Stanley Rosenberg took a leave of absence after four men accused his same-sex spouse, Bryon Hefner, of groping or kissing them while bragging of his access to power. In Ohio, freshman lawmaker Wes Goodman, cheered as a millennial face for family-values voters, resigned after acknowledging inappropriate behavior, allegedly soliciting sex from men. In both California and Illinois, hundreds of women signed complaints detailing legislative cultures where inappropriate behavior was commonplace.

Outside Washington, the sudden disgrace of Weinstein, House of Cards star Kevin Spacey, and comedian Louis C.K. has put hundreds of people out of work in the entertainment industry. Today show host Matt Lauer’s abrupt exit from NBC jeopardized the network’s $500 million in revenue generated from the program.

Christians are far from insulated in paying a price. Roy Moore’s candidacy, despite his reputed pattern of misconduct, divided church leaders. The Goodman case reportedly was known by Christian leaders even as faith-based fundraising continued on his behalf.

The onslaught comes at a strange moment. Under former President Barack Obama, American women of all ages gained a universal right to contraceptives when insurance coverage for birth control became mandatory and parental consent protections for girls 12 and older disappeared. The Supreme Court legalized same-sex marriage nationwide in 2015. In 2016 Americans elected a president who once appeared on the cover of Playboy, one with a long tally of sexual misconduct allegations and undisclosed settlements, even though in an audio recording he bragged pointedly about sexual assault.

When Donald Trump won the presidency with 80 percent of the so-called white evangelical vote—the very segment of society that long decried the dangers of a sex-saturated culture—Americans seemed to be acquiescing to such behavior in the halls of power. Pundits foresaw problems for President Trump, but none predicted the Trump era would usher in a season of national sexual reckoning.

THE BIBLE, IN THE WORDS of one theologian, can be summed up from Genesis to Revelation as “boy meets girl.” The God-imaged man of Genesis is both male and female, the rib taken from Adam’s side becoming at once a separate, complementary creation and remaining one flesh. Men are straight lines and women are curves, and from the beginning they drew close—yet the first couple betrayed each other, quarrelling over what exactly happened in the privacy of the Garden and who was at fault.

Cast from the security of Eden, God’s people are dogged by sexual infidelity. King David probably had six wives, and things went downhill from there: Solomon had 700, plus 300 concubines. Yet the truest depictions of the relationship God desires with His people in the Old Testament are found in the account of Ruth and Boaz and in the poetic Song of Songs—monogamous relationships between two devoted, faithful lovers.

In the New Testament, church leaders are to be “the husband of one wife.” When it comes to Jesus Christ’s relationship to His people, God uses bride and bridegroom imagery. The whole of the Christian canon ends with a New Jerusalem, God’s people as “the Bride, the wife of the Lamb,” consummated—in graphic and one could argue even sexual imagery—by the light and riches of a glorified bridegroom Lamb.

Go ahead, be a romantic, God seems to say, but lust only after your one spouse. Stay true. It’s so hard, reply nearly all who people Old and New Testament stories, especially the power brokers. Yet the overwhelming message is that God remains true, and that’s where men and women find their strength and go for mercy.

When there’s failure, men remain the overwhelming scoundrels in Biblical accounts and news stories. A nationwide Quinnipiac University poll of American voters in late November found 60 percent of women said they had experienced sexual harassment, two-thirds of it in the workplace, while 20 percent of men reported facing sexual harassment of any type.

But women should not be let off. The unfaithful, deceiving female is also a prominent Scriptural type. “The lips of a forbidden woman drip honey,” says the writer of Proverbs, “but in the end she is bitter as wormwood, sharp as a two-edged sword. Her feet go down to death.” When God uses Hosea to highlight Israel’s unfaithfulness, he tells the prophet to “take to yourself a wife of whoredom,” and depicts the sinning nation as a promiscuous wife and an indifferent mother. Depraved Babylon in the book of Revelation is a “she,” a prostitute supported by earthly kings and the devil himself.

For the large number of women who live in fear of reporting sexual harassment, some use accusations to absolve themselves or to entrap prominent men.

It’s in the way we are made that women are yielding and men are persuasive, and the line between persuasion and coercion can blur. But making women more a part of workplace, church, and charity organization—not only to set male-female relations policies but in every area where their talents apply—is a way for women to own their responsibility, too.

AFTER NEARLY FOUR DECADES in the workforce, I’ve never faced anything close to sexual harassment from anyone I’ve worked with, and I have been mentored and respected beyond what I deserve. Like many—or most—women, though, I’ve experienced unwanted sexual advances in the course of doing my job. Overseas, a plate of fruit left inside my hotel room with a note from the hotel manager to come around later unnerved me enough to place a chair against my bolted door that night. A cab driver in Istanbul attempted to kiss me on the lips before I fled his car, and a driver in Damascus turned off the main road, wanting to take me to his home, just for tea, he explained when I shouted at him.

I escaped unharmed, but these and other encounters have a pattern in common with the stories we’ve been hearing: Predatory men will take advantage of a woman in just one lone moment, usually when she is not expecting it, when she is on the man’s turf and—whether only a little or a lot—is dependent on his favor.

Women need wisdom before such encounters, I learned early while working on Capitol Hill, where lecherous lawmakers and male staff members were well-known on the ground-floor hallway where I first worked. As a journalist I learned from a veteran female television reporter on my first reporting trip abroad the importance of vigilance: walking with purpose in a foreign city, not making eye contact with men, not being afraid to shout or draw attention to them when they acted inappropriately.

Faced with weighty statistics and the weight of man- and womankind’s history, employers should be asking in this moment what kind of environment they are creating for men and women to labor in together. As my colleague Jamie Dean advises, men and women should have guardrails in their conduct with anyone of the opposite sex who is not their spouse. Reducing it to a “Pence rule,” where male managers resolve never to be alone with a female colleague, may be wise under certain circumstances but in my view not as a general rule. It has the effect of continuing to treat women as second-class workers who represent too much risk to be alone with. That sets them up for further abuse.

At the same time, women need to feel adequate standing in their workplaces to resist undue time secluded with a male supervisor. Practical ways to accomplish both things include a glass door into the boss’s office rather than a solid one. We all need this kind of transparency, but we also need opportunities for private conversations.

For me, the value of positive male role models can’t be understated. They give women confidence to repel compromising situations and a place to go for help. Two swimming coaches who felt the freedom to both yell and hug me had enormous influence for good in my teenage years. My male colleagues at WORLD have taken time not only to critique but to solicit my input in private conversations and group ones—a simple guideline more Christian organizations can apply. 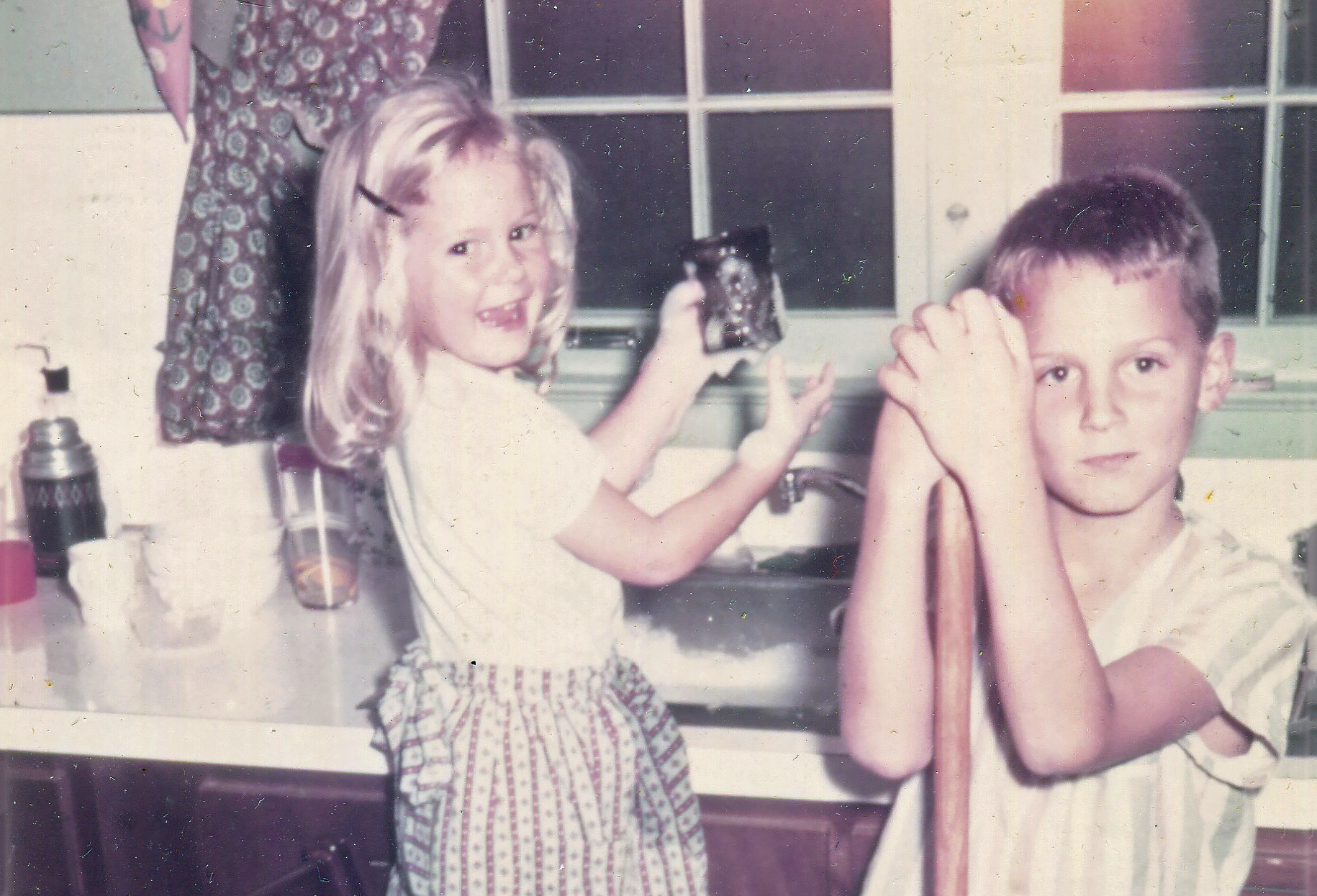 Belz and her brother Handout

Plus, I am the privileged little sister of a brother who was kind (except for that one time in sixth grade), generous, and protective. Access to his world was a given, from playing touch football with his friends to putting tracing paper over his cursive handwriting, so desperate was I to be like him. A husband of 35 years who daily models putting others first also gives me confidence to be assertive in work situations at home and abroad. For women lacking such support, the church, and in particular we older men and women, must rally to bolster them, and to intervene when needed.

It’s this fraternal love we need more of in relationships outside of marriage, knowing how to be brothers and sisters, not potential romantic partners where every encounter is sexually charged. After all, the promise of heaven is to live in eternity not as husbands and wives, but as brothers and sisters before God.