A good Samaritan in Scorpion’s Canyon

In a poor Mexican neighborhood with roosters and pigs, one pastor found an unexpected migrant mission field

The first time I tried to visit Pastor Gustavo Banda’s church in Tijuana, my local guide and I got lost driving around and around the steep canyons in pitch darkness. Eventually, already two hours late, we gave up. The second time I tried to visit, Pastor Gustavo sent a text dissuading us: The winter rains have made the roads here too terrible for travel, he said. Best if you don’t risk it.

On my third attempt to visit Pastor Gustavo, I finally understood why it hadn’t been easy. This time, I hired an Uber driver, and as the vehicle wound up and around the hills, we finally came to a turn where the asphalt disappeared and the road before us was just mud, dirt, and rocks.

“Hmm…” my driver muttered, tinkering with the map on his phone, probably wondering if I gave him the right address. Then he shrugged, lifted his foot off the brakes, and the car bumped and rumbled up the unpaved roads. As the car shook and trembled, so did we. I could feel my teeth rattling and my butt bouncing, and I felt bad for my driver, who was probably worried about the state of his car tires. He was pretty decent about it though, even chuckling as he remarked, “Calle es muy mala, no?” (The road is really bad, isn’t it?) Eventually I asked him to stop and let me walk the rest of the way. He let out a mild protest—“Estás seguro? (You sure?)”—but acquiesced quickly enough.

I thanked the driver, hopped out of the car, and began walking toward the church on foot. The neighborhood, aptly named Scorpion’s Canyon, had to be the poorest area I’d visited in Tijuana thus far. As I hiked up a steady incline, a green truck with giant off-road tires rumbled past, and the men inside waved cheerfully at me: “Hola! Hello!”

The farther I walked, the stronger I smelled the musty odor of farm beasts, and, lo and behold, I came across mud-streaked pigs oinking and rolling in the dirt. As I walked by a barn, I heard flies buzzing and saw brown horses inside, their tails swooshing and their heavy brown eyes peering out of the stalls. Orange-cloaked roosters, perched on a small tree, fluttered to the ground and scuttled away clucking when I passed by. Stray dogs and puppies scampered out to stare and bark at me. 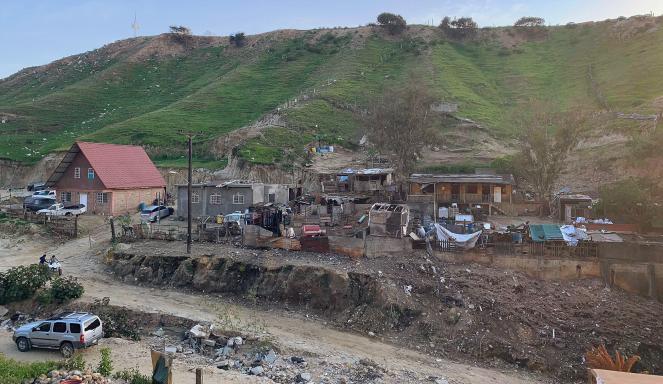 Scorpion’s Canyon isn’t as pristine as it might sound. Empty plastic bottles and straws and clothing littered the side of the road, some debris so old and sun-beaten that it looked encrusted onto the rocks. A little creek at the side was all dried up. Instead of brick walls, the walls on the side of the road were made of old, used tires stacked on top of each other, with big rocks keeping each tire in place. Already, these “walls” were blending into the elements—weeds and green plants sprouted out between tire and dirt, and roosters hopped up the tires like stairs.

And there, at the end of the road, was a beige, flat-roofed building with a bright blue-and-green banner that reads: Iglesia Embajadores de Jesús—The Ambassadors of Christ Church. Every Sunday, about 300 people gather at the sanctuary to worship together—Mexicans, Haitians, Salvadorans, Hondurans, Guatemalans, Nicaraguans, Dominicans, and others from all over Latin America. And it all began with one good Samaritan in Tijuana who dreamed of building a “City of God.”

When Pastor Gustavo built this church, he had no idea his vision would materialize through a migrant crisis at the border. Ever since the pastor and his wife opened the church to shelter migrants in 2016, Scorpion’s Canyon has begun to resemble a picture from Revelation 5:9: “For you were slain, and by your blood you ransomed people for God from every tribe and language and people and nation.”

Someone once described Pastor Gustavo as “eccentric.” Certainly, he’s not your typical evangelical pastor. What pastor would choose this poor, remote canyon to build a church? Not Pastor Gustavo—at least, not at first.

Pastor Gustavo told me when God first told him to build a church in Scorpion’s Canyon, he protested: “God, this place has no houses, only pigs and chickens and horses. It smells so bad here. Who’s going to come to this church, God?” God reminded him, “Remember where I was born? I was born in a manger.” Pastor Gustavo protested again: “OK. But God, when Jesus sent His disciples out to ministry, He sent them out two by two. I need help. I have no money. Send someone to help build this church, then I’ll do it.” Three days later, a man called him up: “I want to help. What do you need?”

In 2011, Pastor Gustavo dug a shovel into the dirt hills of Scorpion’s Canyon to build the church he promised God he would. He also built little houses around the neighborhood for poorer folks. He built in haste, spurred by an urgency in his spirit that something was coming. “My people thought I was crazy,” he recalled. “But I knew we needed to get ready for something.”

Today, Scorpion’s Canyon is still no Garden of Eden. It still smells like horse dung, and the sight of those dirty pigs made me want to swear off bacon. But it’s home for hundreds of people who are strangers in a foreign place and cannot return home for various reasons. Almost all of the 220 migrants currently living in the church are families and children. Here, they feel safe from the violence and homelessness in Tijuana. Here, they can cook meals, wash their clothes, sleep under a secure roof, and let their kids run free without worrying about gangs and kidnappings. 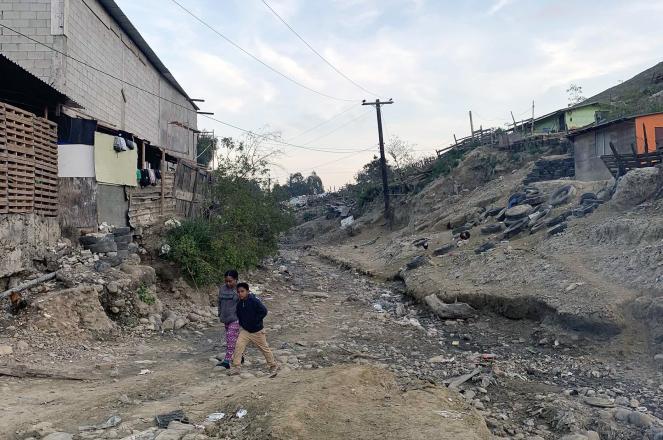 Still, life is not easy. Many of these families plan to seek asylum in the United States, and most have already received a number on the waiting list for preliminary interviews with U.S. officials. Some have already been waiting for months, and they’re losing hope and patience. Mexican officials have stopped handing out work permits to incoming migrants, which means these people feel even more stuck. Their only apparent way toward a normal life is to gain some kind of residency in the United States, but all the dismal news about the state of the border is sucking away their hope.

One young man approached Pastor Gustavo. He looked agitated and unhappy. “I just can’t wait anymore,” he told the pastor. “I want to go to immigration right now. I’m just waiting here, not able to do anything. I don’t see any solution except to cross the border!” Pastor Gustavo listened to his concerns, but strongly discouraged him from crossing the border: “Don’t cross illegally. You’ll be detained for months, and then you’ll be deported, and then you’ll be banned from entering the United States for many years. It’ll be worse for you.” The young man didn’t look any happier, but he nodded sullenly.

“Americans just cannot even imagine what it’s like for them,” Pastor Gustavo later told me. Even as he urges migrants not to cross illegally, he empathizes with their plight. He has heard their stories and seen the physical and emotional scars they bear from the violence and poverty in their hometowns. He has helped them gather evidences of violence back home, printed documents about murdered family members. He knows many of them had no choice but to flee their countries. No matter what harsh policies the United States puts in place, migrants are going to continue streaming to the southern border, because they know no better option, and they cling to hope wherever they can find it, even if it’s flickering in a distant land.

That also means Pastor Gustavo’s work with migrants won’t stop anytime soon. So he’s dreaming beyond shelter and food. He’s already begun construction plans to build a children’s park, a small hospital, a technical school, houses for migrants who want to settle in Tijuana, and a seminary so that one day graduates can go back to their home countries as missionaries. As a pastor, he’s excited to sense the spiritual hunger within these migrants. “You have to come here on Sunday and see,” he told me. “You’ll see that they’re hungry for God. They may have been nominal Christians before, but when they come here, they realize that the only thing they truly have is God.”

It’s a grand dream, but if God can build a growing church among the pigsties of Scorpion’s Canyon, He can do much more, Pastor Gustavo said. The migrants may have arrived longing for the American dream, but perhaps God has something in store for them in Mexico, too.

“This all began eight years ago when the Lord told me to raise a new church here,” Pastor Gustavo said, spreading his arms out at the community around him. “You see, the Lord knows something I don’t.”