A food crisis in China?

Severe flooding, insect infestation, and COVID-19 may be contributing to a food shortage

Outside the popular Hunan chain Chuiyan Fried Beef in Changsha, restaurant owners set up two scales and asked patrons to weigh themselves before entering. After entering their weight and personal information into an app, the customers received the restaurant’s suggested menu items: for women weighing under 88 pounds, a beef dish and fish head; for a man weighing more than 175 pounds, braised pork belly, according to CNN.

As news spread of the restaurant’s gimmick online, netizens accused the chain of fat-shaming.

Chuiyan Fried Beef apologized, noting the weighing in was voluntary, and the restaurant was promoting a nationwide government campaign to cut down on food waste.

Other restaurants have also begun their own initiatives: In Wuhan, the Wuhan Catering Industry Association called on restaurants to restrict the number of dishes to “N-1,” or one less than the number of diners in a group. Typically in China, people share food family style. During banquets, they pile dish after dish onto a central lazy Susan. Other restaurants have promised to serve smaller portion sizes, while state media has criticized livestreamed binge eating, a trend that began in South Korea. Livestreaming platforms said they would ban users who waste food on their broadcasts.

The impetus of these moves is a speech President Xi Jinping made Aug. 11 calling for the country to stop wasting food—a problem he called “shocking and distressing”—in order to persevere the country’s food resources. “Despite several years of bumper harvests, China needs to maintain a crisis mentality for food security, especially after the COVID-19 pandemic,” Xi said. A month earlier Xi inspected farms in Jilin province, urging officials to ensure grain-supply security.

The focus on food waste brings to mind similar instructions by Chairman Mao Zedong in 1959 at the beginning of the Great Famine, in which tens of millions of people starved to death. Some believe China may be facing a food crisis as it deals with the fallout of the pandemic, massive floods, and insect infestations. But observers don’t know its severity since the government has not released much information outside of rosy outlooks.

Several indicators reveal the looming problem facing China. In recent months, heavy flooding has inundated large areas of southern China and caused the 3,900-mile-long Yangtze River and its tributaries to rise to dangerous levels. While heavy rains are typical in the summer, this year’s rainfall has far exceeded the norm, causing the worst flooding at the Yangtze in four decades. So far, the deluge has destroyed 13 million acres of farmland, affected 63 million people, and caused nearly $26 billion in economic damage.

For the first time since 1949, floodwaters rose over the toes of the Leshan Giant Buddha in southwestern Sichuan province, a 1,200-year-old world heritage site that stands 233 feet tall. Water inflows to the Three Gorges Dam are also expected to reach its highest levels since the dam started holding water in 2003, according to China’s Ministry of Water Resources. 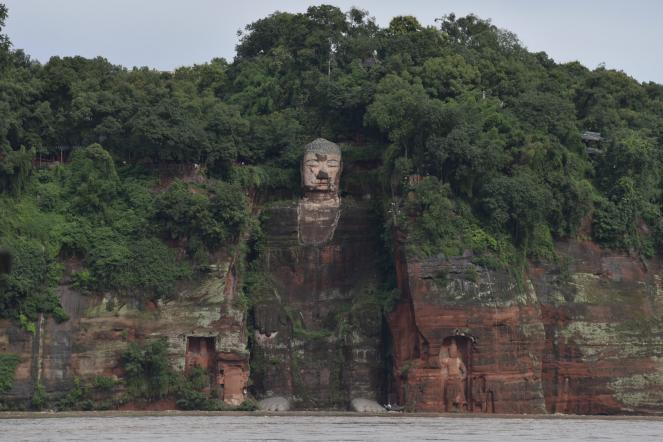 In this photo released by China&#039;s Xinhua News Agency, floodwaters flow near the historic Giant Buddha in Leshan in southwestern China&#039;s Sichuan Province on Aug. 18,. Xu Bingjie/Xinhua via AP

The Yangtze River basin accounts for 70 percent of the country’s rice production, and the Chinese brokerage firm Shenwan Hongyuan estimated the floods could cause the country to lose 5 percent of its rice production compared to last year. Yet the total damage could be much worse, as heavy rainfall is expected to continue. The flooding is also affecting vital crops such as grain.

Food prices have increased by 10 percent compared to a year ago, with the price of corn 20 percent higher and the price of soybeans up by 30 percent year-on-year. Corn feeds China’s growing pig population, which is recovering from the African Swine Flu, a fatal disease that killed 40 percent of the country’s pig population last year. The floods have also spawned dozens of new cases of the disease, which is fatal for pigs. Corn crops also fell victim to an intense infestation of Fall Armyworm, a type of moth, in June, according to the U.S. Department of Agriculture’s Foreign Agricultural Service.

In Henan province, which accounts for 10 percent of China’s grain, farmers are hoarding their wheat as they expect the price to rise due to low supply, according to the South China Morning Post. A manager of privately owned “wheat purchase stations” in the town of Donghong surnamed Zhu told the Post his purchases fell by 44 percent this year.

He said wheat output from the area had fallen 30-40 percent from a year ago, even though the Henan provincial government said the harvest was at an all-time high. Zhu told the Post, “official figures may have been produced to assure the public."

Cai Xia, a former professor at China’s elite Central Party School, accused Xi of “killing a country” and told The Guardian that “under the regime of Xi, the Chinese Communist Party is not a force for progress for China. In fact it is an obstacle to China’s progress.” After a speech Cai made criticizing Xi leaked online, the party expelled her. She has since left China and said there is widespread opposition within the party, but few dare to speak out.