A day in a polio campaign

Nigeria is nearly polio-free thanks to oral vaccinations, but some parents remain resistant

A polio campaign team member dispenses the vaccine to a child. Onize Ohikere

At 7:00 on a Saturday morning in July, dozens of volunteers gathered at the primary health center in the town of Karu. It marked the start of a four-day polio campaign on the outskirts of Abuja, Nigeria’s capital city.

Nigeria is the only country in Africa where the wild poliovirus is still considered endemic. But the country has not recorded any natural transmission in nearly three years and could be declared polio-free by the end of this year.

Despite the rigorous vaccination campaigns, several challenges still pose a risk for future outbreaks. Polio is a highly infectious viral disease mostly affecting children younger than 5. Mainly spread through feces, the virus multiples in the intestine and can infect the nervous system, eventually resulting in paralysis. The disease has no cure but can be prevented by vaccination.

At the clinic, all the volunteers teamed up and left for their designated areas. There, they started a routine that continued for the next four hours: knock on each door, introduce themselves as a team from the immunization unit, and ask if families have any children age 5 or younger.

At the houses with children, they dispensed drops of the oral vaccine into each child’s mouth, then marked his left pinky finger with a purple marker to indicate he received it. 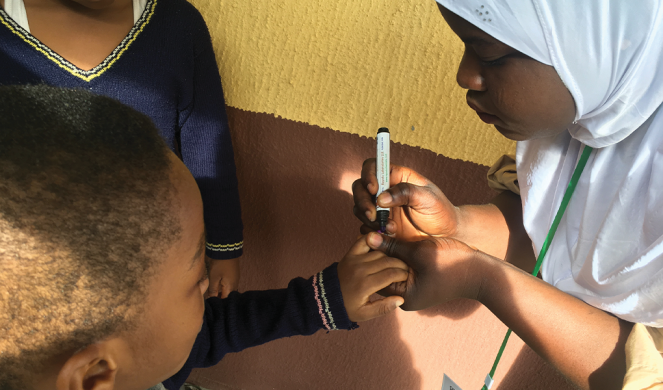 At one house where a team knocked, a mother unlocked the wooden guard door with her two young sons in tow. The sounds of a cartoon echoed from the television in their living room. Only the youngest boy, who was 5, received the oral dose. He came forward hesitantly, while his brother watched with a smile and later examined the little mark on his finger.

Team members also used white chalk to mark the outside of each house they visited so their supervisors knew whether they needed to revisit. Often the initial visit was successful, but sometimes families would refuse the vaccine.

Umar Salihu, one of the team leaders I accompanied, said a big challenge they face is parents who mistrust the vaccinations. His team knocked on the door of Oliver Nwokorie, who confirmed he had a 1-year-old son. But Nwokorie was hesitant: He said he’d heard rumors about side effects and the use of expired vaccines.

Salihu spent a few minutes confirming he came from the hospital and explaining how they coordinate the campaign process. Finally, Nwokorie gave him permission to squeeze out the drops into his son’s mouth.

“I wanted to know the density of what they’re giving, reactions to it, if it’s still valid,” Nwokorie told me.

Over the four days of the campaign, some 207 volunteers stopped at 31,304 homes. The volunteers go through a full day of training and receive a $12 stipend for their work. John Nelson Ifeanyi, one of the lead volunteers, said last year the clinic ran the campaign seven times.

The wild poliovirus became a global epidemic in 1996, when it paralyzed 75,000 children around the world. At the time, former South African President Nelson Mandela launched the Kick Polio out of Africa campaign together with Rotary International.

Oliver Christiaan Rosenbauer, the spokesman for polio eradication at the World Health Organization, told me that just 10 years ago Nigeria was the epicenter of polio transmission, with genetic traces found as far as Indonesia. 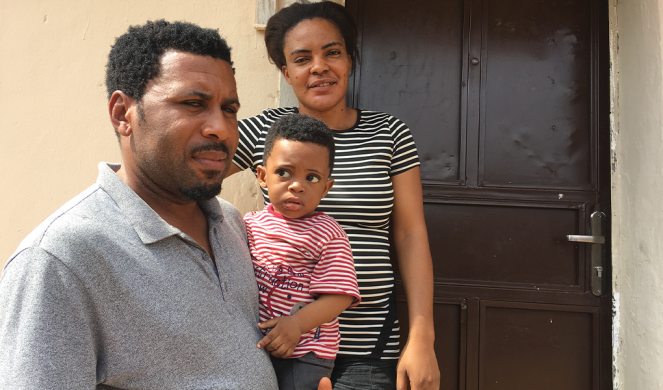 Oliver Nwokorie and his family hesitated before accepting the vaccine. Onize Ohikere

Rosenbauer said vaccination teams in Nigeria still battle to reach communities because of the country’s insecurity, nomadic population movements, and gaps in vaccination campaigns, among other challenges. He lauded Nigeria’s feat as a success story but noted more work remains.

The country still records cases of vaccine-derived poliovirus. This weakened strain of the virus can mutate and spread in communities with low immunity rates and trigger an outbreak.

“The fact that you have a polio outbreak in a given area means you have vaccination gaps,” Rosenbauer said. “So you need to boost community vaccination … to a level the virus doesn’t find any susceptible children.”

Ogah Donatus was washing laundry outside with her 2-year-old daughter playing nearby when the team came to her compound. As soon as they explained their work, she gave the team members permission to vaccinate her daughter.

She told me her three older children had also received all their vaccines, including against infections like meningitis. Despite the worries of some Nigerian parents, she had no qualms about the vaccinations, she said: “It’s a preventive measure from the disease.”