A culture for predators

The structure of the film industry gives cover to sexual misbehavior

But Hollywood has more than one ugly troll hiding in its honeyed hills. At Miramax, which Weinstein founded in 1979 with his brother to produce independent films, sexual harassment was part of the culture, as more and more women have begun to establish now for the first time. Women say that in the industry, the lack of accountability in both company structures and the press keeps this culture alive and well.

In the early 2000s, Miramax had offices at Piazza del Sol, a historic building that was a famous brothel in the 1930s. According to a former female employee who worked at Miramax in the early 2000s, the office received regular shipments of porn videos, which were distributed to employees. In her early 20s at the time, she recalls a general understanding (though it was never explicitly stated) among women that sexual favors led to promotions, and groping wasn’t unusual. WORLD granted the source anonymity because, as her career is in its early stages, going on the record could blackball her in the close-knit movie industry.

The bombshell investigation from The New Yorker confirmed this general pattern too. From dozens of interviews with former employees, Ronan Farrow reported “a culture of silence about sexual assault inside Miramax and the Weinstein Company and across the entertainment industry more broadly.”

Our Miramax source argued the film industry doesn’t have a structure in place to prevent or police such behavior. Women in their early 20s starting their careers in the industry don’t typically have the protection that organizations such as unions sometimes provide, and they often don’t know any recourse against misconduct when it happens.

“I couldn’t move up in the company because I wasn’t willing to play the game,” the source said about her time at Miramax. “That was the most scuzzy environment I ever worked in.” Other parts of the industry had “scuzzy” environments too, she said. On sets after she left Miramax, she was used to male crew members grabbing her rear end, and she felt little recourse at the bottom of the food chain. That in turn led her to want to keep from “standing out,” an unhelpful posture for someone starting a career in one of the most competitive industries.

Aside from the general vulnerabilities young women face when they enter the industry, company non-disclosure agreements (NDAs) also keep a lid on bringing misdeeds to light. An anonymous statement from the Weinstein Co. employees argued that the culture of silence in the industry will continue as long as companies like the Weinstein Co. require employees to sign non-disclosure agreements. (The statement was anonymous because the employees had all signed NDAs.) The Weinstein Co. is the production company Harvey and Bob Weinstein began after they left Miramax in 2005.

Peter Biskind’s 2004 book about Miramax, Down and Dirty Pictures, helps the reader understand the culture of protection around Weinstein, from press to employees—a structure likely repeated in other parts of the industry. Biskind recounts how Weinstein tried to talk him out of doing the book by offering him a Miramax book deal. Previously when he worked on an investigative piece about Miramax for Premiere magazine, the Weinsteins threatened to pull ads from the magazine, and higher-ups killed the story. 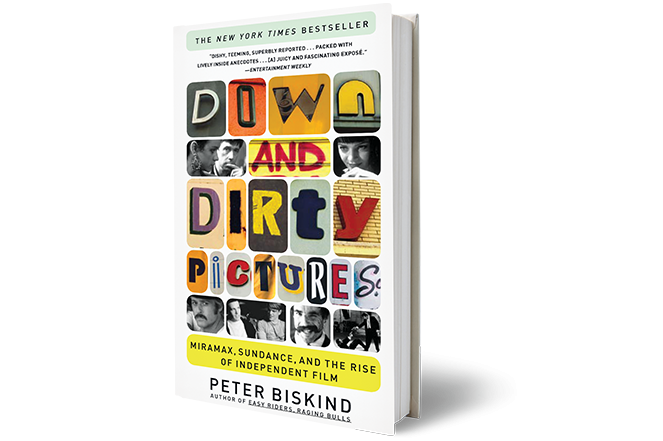 “Next thing I knew, Harvey was writing columns for Premiere and I was his editor,” Biskind wrote in Down and Dirty Pictures. Biskind said he didn’t know about the serious sexual allegations against Weinstein, but his book details an abusive, rough office environment with Weinstein ripping phones out of the wall.

Scott Rosenberg, a screenwriter at Miramax from 1994 to the early 2000s, penned a screed on social media about the culture of protection around Weinstein too—from employees to press to actors to directors to executives. Rosenberg said he too was complicit—though he said no one knew the specific allegations of sexual predation against Weinstein, “everyone [obscenity] knew.”

“Here’s where the slither meets the slime: Harvey was showing us the best of times,” Rosenberg wrote. “He was making our movies. Throwing the biggest parties. Taking us to The Golden Globes!” 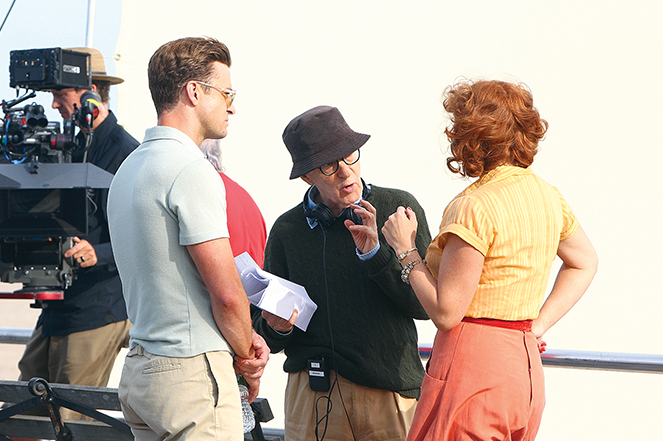 THE SLIME IS NOW OOZING over the parties. In New York, Harvey Weinstein’s name was buzzing around the room as members of the press squeezed into every last seat for the screening of Woody Allen’s new film, Wonder Wheel. The New York Film Festival had scheduled Allen’s latest film to premiere at the festival’s closing night, an honor, and Amazon Studios made this its first film to distribute independently, with a Dec. 1 release date. Allen’s new film features a love triangle where a Coney Island lifeguard is torn between an unhappy wife and her stepdaughter—Allen is married to his former partner’s adopted daughter.

Unlike the festival’s other big films, Wonder Wheel had no press conferences or interviews with talent like the directors and actors—probably because the film’s flacks wanted to avoid questions about the allegations of sexual abuse against Allen. Dylan Farrow has accused her father of molesting her as a 7-year-old, but authorities filed no charges in that case, and Allen denies the accusation.

Allen’s son Ronan Farrow, who has publicly supported his sister’s accusations, broke the New Yorker exposé, which detailed numerous on-the-record allegations of assault committed by Weinstein. Farrow said that he brought his exposé on Weinstein to NBC; the company declined to run with it. NBC said it was an early version of his piece without enough reporting.

Before entertainment writers could decide how to navigate Allen’s Wonder Wheel, news broke that Isa Hackett, a producer for the Amazon show The Man in the High Castle, had filed a sexual harassment complaint against Amazon Studio’s chief Roy Price (he allegedly pressed her to have sex with him). Price has since resigned. 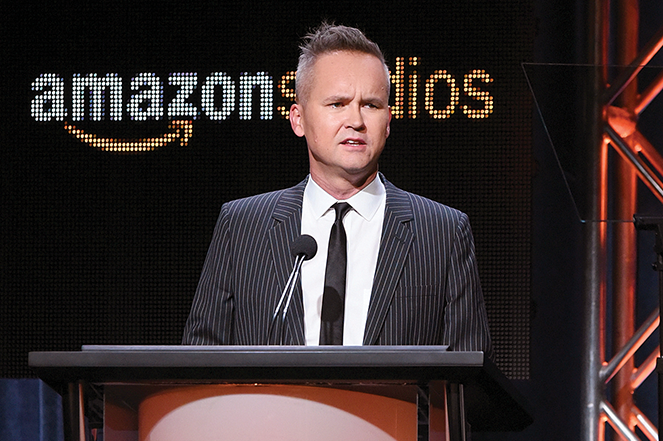 The next day Amazon canceled Wonder Wheel’s red carpet for the premiere, a serious move. Buzz for a film translates to money and awards, and Kate Winslet as the star of the film has a good shot at an Oscar nomination for her performance. Skipping the press, Allen did one roundly criticized interview with the BBC where he cautioned against a “witch hunt” after the Weinstein allegations.

The industry and entertainment press have been happy to oblige such requests from filmmakers in the past, giving standing ovations to director Roman Polanski, who fled the United States before his sentencing in the rape of a 13-year-old. In 2009, more than 100 industry insiders circulated a petition calling for the release of Polanski when Swiss authorities temporarily arrested him in 2009. Prestigious directors Woody Allen, Wes Anderson, Darren Aronofsky, Alejandro Iñárritu, and Martin Scorsese signed the petition—and Harvey Weinstein helped circulate it.

In entertainment, members of the press have the most close-knit relationships with those they cover I’ve seen in any field. Reporters often begin interviews with actors and directors by saying, “Congratulations!” or, “I’m a huge fan.” They might ask a director for a group selfie. Sometimes writers covering the industry are looking to get into the industry themselves. There are premiere parties and the press junkets, where movie stars laugh with reporters over steak and wine. Who would jeopardize that?

“A reporter’s role isn’t to carry water for those women,” Farrow wrote last year in a piece not about Weinstein, but his father. “But it is our obligation to include the facts, and to take them seriously. Sometimes, we’re the only ones who can play that role.”