A crop of covers

Still Woman Enough by Loretta Lynn: Lynn has recorded over half of these 13 songs before: “My Love” and “Honky Tonk Girl” in 1960, “Where No One Stands Alone” in 1965, “You Ain’t Woman Enough” in 1966, and “One’s on the Way,” “I Wanna Be Free,” and “Coal Miner’s Daughter” in 1971. But there’s nothing fusty about her revisitations (not with John Carter Cash and Lynn’s daughter overseeing the production) or about the six that she’s only just getting around to—it’s hard to believe that she’s left “I Saw the Light” and “Keep on the Sunny Side” alone until now. And although it’s generally impolite to mention a woman’s age, Lynn is singing so well that the fact that she’ll turn 90 on her next birthday is nothing to be ashamed of.

Let’s Get Happy Together by Maria Muldaur & Tuba Skinny: Muldaur has never been coy about her debt to Depression-era jazz, blues, and swing, but it’s still a pleasure to hear her pay it back. These are songs whose sentiments she obviously feels deep down, whether playfully whimsical (“I Like You Best of All,” “Be Your Natural Self”), playfully profound (“He Ain’t Got Rhythm,” “Patience and Fortitude”), or profound period (“Road of Stone”). And what she feels deepest down of all is the tug of the Crescent City, a tug represented in equal parts by the neo-trad New Orleans tuba-trombone-clarinet-banjo-washboard collective with whom she shares the billing and not one but two selections that rhyme “Delta” with “shelter.”

Afflatus by the Polyphonic Spree: Few if any other pop ensembles could even come close to getting away with an all-covers album this broad in scope. With a membership currently numbering 25, about a third of whom form a choir and the rest of whom an orchestra, the Spree makes pivoting from pre-breakthrough INXS to uncommonly lucid Daniel Johnston to psychedelic-era Rolling Stones to pre-disco Bee Gees to Head-era Monkees sound easy, natural, and, most importantly, good. Really good, in fact. What the group can’t bring off—what it’s unlikely any group could bring off—is pivoting from Barry Manilow to ABBA to Wings to the Association to Rush. Guilty pleasures are called guilty pleasures for a reason.

Marcos Resende & Index by Marcos Resende & Index: These scintillating explorations of the meeting points between the rhythms of South American jazz (Brazil’s to be specific) and the electric keyboards of North American fusion would’ve easily ruled the roost had they been released when they were recorded 45 years ago. But, contemporary context or no contemporary context, they still command attention. Even “Praça da Alegria,” which melody-wise spends most of its eight-plus minutes sounding like the theme of an imaginary ’70s TV series (one pitched halfway between, say, Love Boat and Cannon), sparkles. The other five cuts tether energetic spontaneity to sophisticated grooves at an average length of 6:50 and don’t waste a second. 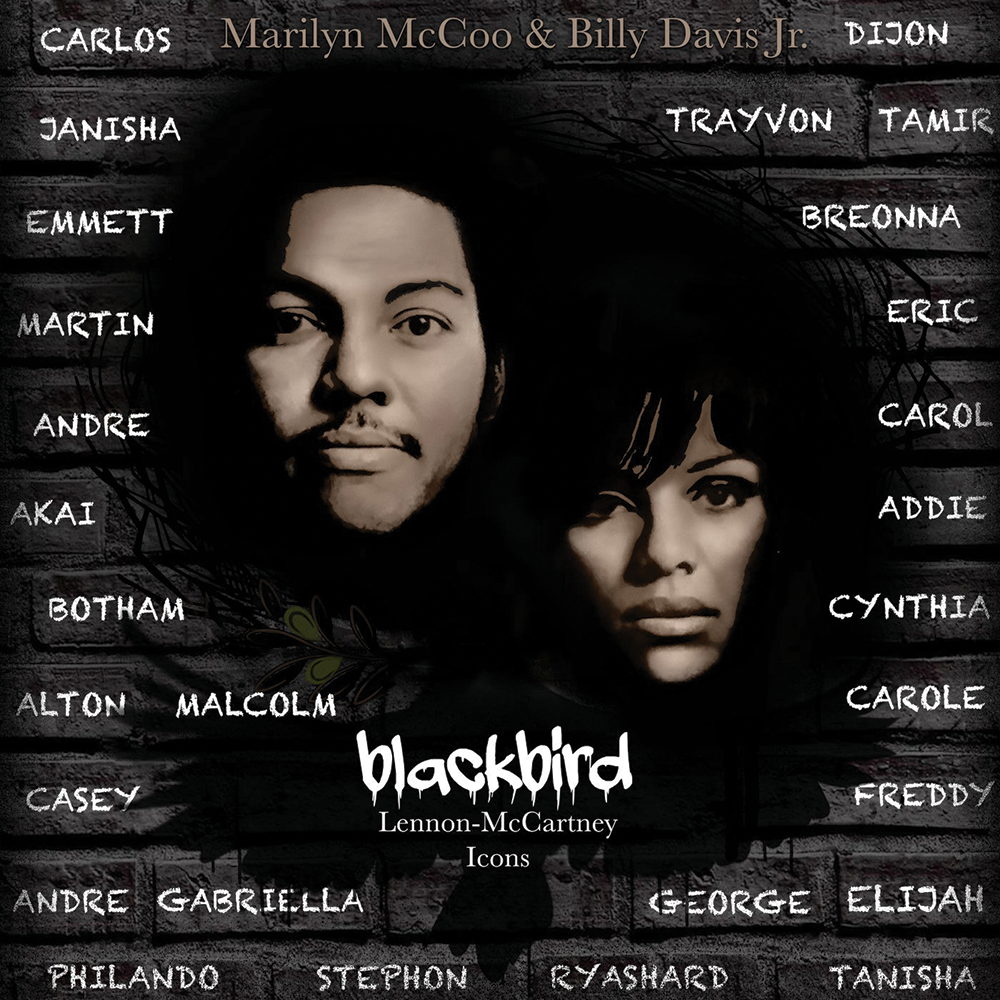 The weirdest all-covers album of 2021 (so far) comes from the Fifth Dimension alumni and perennial pop power couple Marilyn McCoo and Billy Davis Jr. What makes Blackbird: Lennon-McCartney Icons strange isn’t its contents (eight Beatles favorites plus one apiece from solo Lennon and McCartney hardly qualifies as eccentric) or its quality. They’ve put serious thought into the arrangements, especially the gospel one in which Davis turns “Help!” into a prayer.

What makes Blackbird bizarre is the attempt to pass it off as a Black Lives Matter soundtrack. The cover art surrounds the couple’s faces with names such as “Trayvon,” “Breonna,” “George,” “Emmett,” “Martin,” and “Malcolm,” implying connections that are tenuous at best, nonexistent at worst, and ­misleading in either case. Strangest of all, the video for “Ticket To Ride” grafts the song onto Rosa Park’s Montgomery bus protest. —A.O.