A congregation of avatars

In the 21 minutes that his virtual reality Sunday service was still functioning, Pastor Bill Willenbrock had to shush a group talking in the back of the room, ask a small wolf to get off the pulpit, and kick out a doppelgänger yelling obscenities. Minutes later, his virtual reality church world crashed, leaving about 20 attendees (including this reporter) frozen in their pews.

Bringing the gospel to virtual reality has not been easy.

Willenbrock, aka “PastorBrock,” is one of a small group of pastors ministering to the wild universe of virtual reality, or VR for short. Thanks in large part to the coronavirus pandemic and falling prices of VR headsets, virtual reality is becoming a literal reality in many people’s lives. Today offices have meetings in VR, seniors use VR headsets to go skiing in the Alps, and researchers suggest VR may have therapeutic benefits. Pastors like Willenbrock hope VR can also help them spread the gospel among gamers and other web users.

For two months, I periodically donned a VR headset in front of my computer and spent time exploring four Christian ministries that call the metaverse their home. Churches that meet in virtual reality allow users, represented by digital characters known as “avatars,” to walk through “worlds” designed to look like churches. Avatars can sit in a pew, listen to a preacher, and talk with each other afterward—all without the need for masks, social distancing, or Zoom. 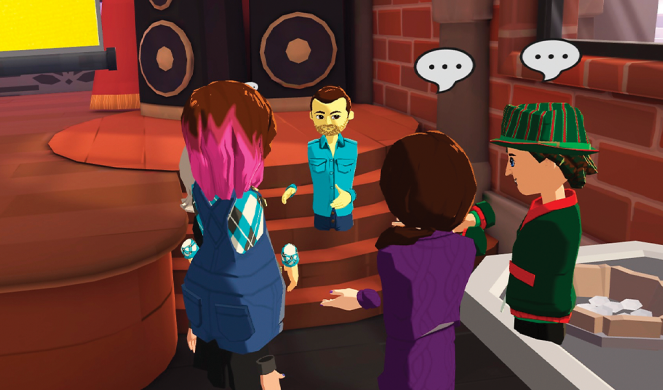 VR may be a visually dazzling new platform for a church service, but fans say the unpredictable interactions with people are what make it alluring.

Willenbrock, who also pastors the real-life Faith Lutheran Church (Missouri Synod) in Whitehall, Mich., says he was initially drawn to VR last year after watching a video of a YouTuber walk through VRChat, a VR social media platform, and listen to random people “overshare” about their divorces and traumatic situations. Willenbrock noticed that once people found they could be completely anonymous in VR, they felt free to tell a stranger their most personal problems. He imagined the influence a Christian could have and thought, “I gotta get in there.”

Willenbrock downloaded VRChat in May 2019 and by the end of the summer was explaining the gospel to people in virtual reality. Then he set up a Discord server—a digital bulletin board for gamers or VR users to meet and chat—and the prayer requests came in. People shared about suicide attempts, depression, anxiety, and personal problems they would tell no one else in real life.

The wounded, reckless, foul-mouthed, and wandering all seem part and parcel of the VR church experience. Willenbrock accepts them all. Sometimes he’s rewarded with rich spiritual conversations. Other times, trolls eject him from his own virtual church. He has been so prolific at evangelizing random avatars in the metaverse that D.J. Soto, the pastor of another virtual reality–based congregation, has called Willenbrock the “Billy Graham of VRChat.” 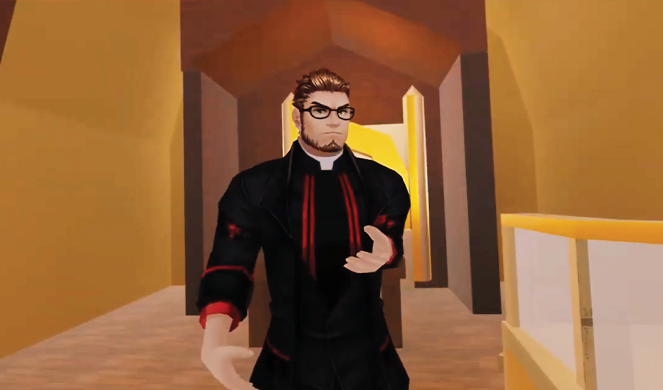 “People ask me, ‘What’s a pastor doing in VRChat?’ I tell them, Jesus hung out with prostitutes, I get to hang out with you degenerates,” Willenbrock jokes.

Soto is no ministry slouch either. His Virtual Reality Church—the first church to exist solely in VR—hosts a couple of hundred avatars every Sunday across three different VR platforms. At a service held in VRChat, I walked through a big wooden door and entered a room with purple floors and purple pews. Some of the two dozen fellow church attendees looked like miniature dolls: One was a young man with large white wings, and another came as a trash can. Soto opened with a prayer: “Thank you for each of these avatars. We know each of these avatars represents a person, so we pray for them.”

Standing on the blue stage while preaching on the book of Colossians, Pastor D.J. looks like a computerized version of himself—dark, short-cropped hair, glasses, and casual jeans. His preaching style is similarly casual. “You can do the pious thing, you can do the discipline thing. But man, when it comes to the spiritual life, when it comes to how God knows you, you can be as devoted and disciplined as you want, but it’s not going to help you,” he tells the avatars.

Rather than shouting “Amen” or clapping during the sermon, well-behaved avatars who like what they hear can push a button on their VR controls that sends a dozen emojis upward. Some release hearts, happy faces, or clapping hands. Those who aren’t happy can push a button that creates a portal—an oval-shaped mist—and in seconds exit the church for a different world. 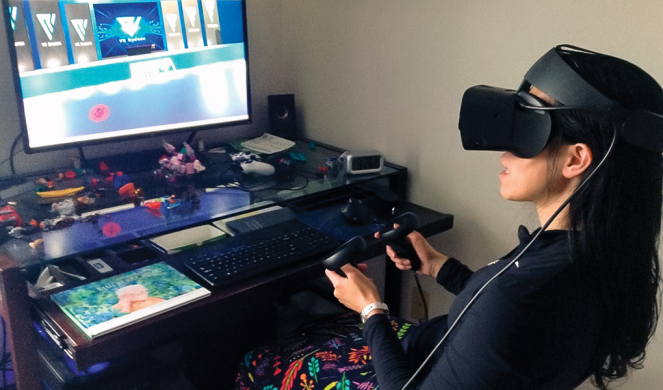 Attendees at another virtual church, CHVRCH+, walked through a thick digital forest before arriving at a faithful re-creation of First Miami Presbyterian Church (PCUSA), the Florida-based, real-life church of Pastor Christopher Benek. Although his virtual world looks like a church, Benek emphasizes that his ministry isn’t a replacement for a physical church.

CHVRCH+ recently lost its VR world developer, so its meetings are currently on hiatus. But at a virtual service I attended last year, Benek appeared as an animated version of his real self, with yellow hair, black ball cap, and a torso so straight you could measure it with a ruler. He spoke to an avatar—Link from Nintendo’s Legend of Zelda game franchise—about baptism. In real life, Link is Almog, a 28-year-old who professed faith in Christ recently but hadn’t been able to attend physical church due to pandemic restrictions. Benek said he’d be happy to baptize him, but only in person. Technology does have its limits.

All the pastors I spoke to take church theology and ordinances seriously, but each has a different perspective on how that should look in virtual reality. Soto of VR Church conducts baptisms in VR, but others say such religious rites must remain in the physical realm. Benek and Willenbrock hold Bible studies and pray and minister to people in VR, but because both belong to denominations that reserve communion and baptism for their in-person churches, they do not conduct them in virtual spaces.

Jason Poling is another pastor who hosts a “VR campus” of his in-person church, Cornerstone Church in Yuba City, Calif. He says he feels everyone is “building the plane in midair” when it comes to developing a theology for virtual reality. Since his Evangelical Free denomination allows him the freedom to decide about virtual ordinances, he says he’s on the fence. “Before the pandemic only a few churches were promoting a lot of these virtual realities, but now, everyone’s really bending,” he said. He has told VR congregants they can take communion using elements in their homes, he said.

John Dyer, assistant professor of theological studies at Dallas Theological Seminary, says when it comes to spiritual guidelines for virtual reality, the bottom line is never forgetting the person behind the avatar. “All of it is real and all of it matters, whether it’s in VR or not.” Dyer sees parallels in how the Apostle Paul addresses churches “virtually” through letters, but he adds that even then, Paul reserved some topics for in-person meetings. He believes Christians should think likewise when it comes to virtual reality worship.

“Church doesn’t have to mean pews. It doesn’t have to be Sundays either,” said Dyer. “But if your only Christian experience is mediated by technology and you don’t share that part of your life with others in real life, then it can be unhealthy.”

People who’ve joined these VR Christian communities say the relationships they’ve developed there are hard to replicate in real life. Yvonne, a shut-in for the last 15 years who attends Poling’s VR campus, said going to church as an avatar allows her to have conversations where “you don’t see race, and you learn about people through the way they talk.” James, who attends Willenbrock’s fellowship, said he’s thrilled to have found a place where atheists and Christians can talk without feeling judged.

Dyer predicts the VR tech trend will only last for about five years, until people move on to better technology. He says that shouldn’t be surprising. Christians also set up ministries in Second Life, another online virtual world that had its heyday in the early 2000s. Now, Second Life has faded into obscurity. The same may happen with VRChat.

But even if virtual worlds pass away, Christians will never stop finding ways to reach the unreached.