A closer look at claims of election fraud

Since Nov. 3, political conversations dominating social media platforms have centered on voting irregularities and possible fraud in the 2020 presidential election. Many Republicans’ perception of widespread election fraud has undermined confidence in the election results, which have not yet been officially certified but by all current counts appear to be in former Vice President Joe Biden’s favor.

This has some parallels to 2016, when 85 percent of Democrats said Russia meddled in the presidential election. But fallout from this election has included death threats against local election officials running the vote counts, calls for election officials to resign, and President Donald Trump raising questions about the election’s validity (his legal team has taken several cases to court). Data analysis of social media posts receiving the most engagements this week shows how quickly election claims—some true, some not—spread.

Priests for Life, a pro-life organization based in New York, sent a fundraising email to supporters this week noting, “The election is far from over ... especially when you consider the rampant voter fraud is being investigated and revealed.”

Some of those online conversations are having real-world consequences, as prominent Republicans call the election into doubt. U.S. Attorney General Bill Barr authorized immediate federal probes into fraud, and Texas Lt. Gov. Dan Patrick, a Republican, unveiled a $1 million fund that would reward reports of voter fraud. Georgia’s two Republican senators have called on Georgia’s Republican secretary of state to resign because he “failed to deliver honest and transparent elections.” Republicans in other states have similarly attacked local secretaries of state and called for their resignations.

The Trump campaign has argued thousands of voters in Clark County, Nev., voted from out of state when they weren’t eligible. Clark County’s registrar said state law allows the mostly military population in question to vote while out of state.

And officials have found voting error and election administrator incompetence. A clerk in a small town in Michigan failed to update election software, which state officials said resulted in the county initially showing a landslide victory for Biden. Trump won the county when canvassers reviewed the results. New York City mailed 100,000 faulty absentee ballots with the wrong names printed on the outside. It sent those ballots out again with the correct names.

One data analysis from Stanford University and others noted that given the hundreds of millions of votes coming in from counties across the country, “an absence of any irregularities would in and of itself be irregular.”

But instances of voter fraud or mistakes so far don’t amount to numbers big enough to change the projected outcome in several states Trump would need to flip in order to win. Election experts have argued for months that because local officials administer elections by their own rules, a national fraud scheme would be nearly impossible to pull off. The most significant voter fraud cases have happened in local races, where local officials could control small numbers of votes, such as a case this year in a New Jersey city council race.

Widespread fraud is “just not feasible,” said Michael Adams, the Republican secretary of state for Kentucky, in an interview with Yahoo News. Adams was also an election law adviser to Vice President Mike Pence.

A swirl of information on social media deserves careful sifting, as Exodus 23:1 reminds us: “You shall not spread a false report.” Here we look at six stories and social media posts this week that generated the most engagement, according to data analysis firm NewsWhip. Most sowed doubts about the electoral process, and some shared false information. These weren’t necessarily the most popular posts on Facebook, but generated the most public engagement. 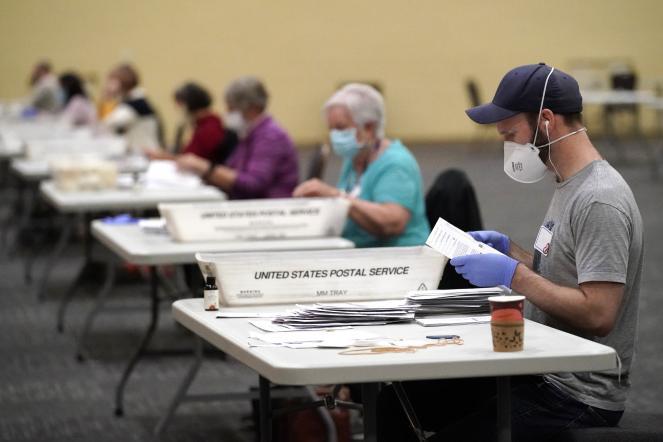 (1) Posts from President Trump consistently generate the most public engagement on Facebook. The top Facebook political post on Nov. 9 was from Trump, quoting Newt Gingrich: “This was a stolen election. Best pollster in Britain wrote this morning that this clearly was a stolen election, that it’s impossible to imagine that Biden outran Obama in some of these states. Where it mattered, they stole what they had to steal.” The post had more than 1 million interactions in 24 hours, according to NewsWhip.

The “best pollster in Britain” whom Gingrich referenced was Patrick Basham, a columnist for the Sunday Express, who before the election had predicted that Trump would win in a landslide. Post-election Basham argued that his prediction of a landslide was “off” because of “voter fraud.”

On Nov. 10, the top post on Facebook by engagement was President Trump’s post that he had won Georgia. Trump is currently behind Biden in Georgia by about 14,000 votes, although Georgia is planning a hand recount.

(2) Other top posts by engagement include headlines from Breitbart and The Daily Wire about voting irregularities. A Breitbart piece with the headline “Investigators Dispatched After Fulton County Discovers ‘Issue’ with Ballot Reporting” had the second most social media engagement for Nov. 9 among political stories, according to NewsWhip. That article claimed the “issue,” which turned out to be 342 ballots that needed to be rescanned, might “significantly affect the current Biden lead in Georgia.”

Another top story from Nov. 9, by social media engagements, was from The Daily Wire: “Wisconsin Election Commission Might Have Violated State Law By Allowing Clerks To ‘Fix’ Ballots, Report Says.” Wisconsin’s rules on absentee ballots are stricter than in other states. It requires a witness signature on absentee ballots, for example. The report cited in the Daily Wire story consisted of a quote from retired Wisconsin Supreme Court Justice Michael Gableman, saying that the Wisconsin Election Commission had violated state law with its guidance for clerks handling ballots missing witness addresses.

But the state election commission, consisting of Republicans and Democrats, had unanimously decided on guidance before the 2016 election: Clerks could fill in witness address information from a voter database if necessary. The clerks must fill in the address in red ink in case there are any questions about particular votes. Biden currently leads Wisconsin by about 21,000 votes.

(3) Most Facebook activity happens in private groups, which often link to YouTube videos which can spread misinformation more easily without being flagged by social media platforms. One of the top YouTube political videos by engagement recently claimed RealClearPolitics had rescinded its prediction of a Biden win of Pennsylvania. This is false, as RealClearPolitics had never called Pennsylvania. Biden currently leads the vote in that state by about 47,000 votes.

(4) On Nov. 10, three of the Top 10 stories by engagement on social media were Barr’s authorization of immediate federal probes into voting irregularities. In previous elections, the Department of Justice has waited to begin such investigations until after states certify their election results. After Barr announced the new policy, the head of the DOJ division that prosecutes election crimes resigned.

Dominion provided the voting equipment in Antrim County, Mich., which initially showed Biden as winning, then flipped to Trump after canvassers reviewed the numbers. Michigan officials said that was human error from the county clerk uploading Antrim’s results. The Dominion machines correctly tabulated the votes, but a Michigan company called ElectionSource provided the election software, which the secretary of state said the clerk should have updated before uploading results.

“Election clerks work extremely hard and do their work with integrity,” wrote Michigan Secretary of State Jocelyn Benson in a statement about the voting errors. “They are human beings, and sometimes make mistakes. However, there are many checks and balances that ensure mistakes can be caught and corrected.”

(6) A Nov. 7 Newsmax video was one of the top posts on Facebook (with 15 million views) and included claims about dead people voting, another theme among popular posts. A Twitter user, @Fleccas, also spread many of these claims in viral tweets. He highlighted a William Bradley, born in 1902 and died in 1984, who voted by absentee ballot in Michigan. That turned out to be Bradley’s son, also named William Bradley, who lives at the same address as his deceased father.

Dead people did vote in the election, legitimately and illegitimately. Some states allow votes from people who died before Election Day but were alive when they submitted mail-in ballots or early votes in person. Some states also put the year 1900 or the date 01/01/01 as a placeholder for registered voters whose age is unknown, which has raised suspicions in certain cases.

Fraudulent votes from dead people were cast, for both Trump and Biden voters, but so far there is no evidence of it in large numbers. Pennsylvania authorities charged one man, a registered Republican, with attempting to vote via mail-in ballot for his deceased mother. The county said it was the first voter fraud arrest in 30 years. New York authorities charged a registered Democrat for doing the same. Nevada officials discovered at least two ballots in Clark County that came from deceased voters.

The Department of Homeland Security has a long explanation of how local election officials regularly purge voter rolls based on death records.

“While there can be some lag time between a person’s death and their removal from the voter registration list, which can lead to some mail-in ballots being delivered to addresses of deceased individuals, death records provide a strong audit trail to identify any illegal attempts to cast ballots on behalf of deceased individuals,” DHS wrote.