One worrying trend that persists in the midst of a pandemic: a refugee crisis rivaling any witnessed in modern history. An estimated 26 million people meet the formal definition of refugee, having fled their countries with a well-founded fear of persecution.

This year, despite pandemic lockdowns, more than 25,000 people have departed Syria, Libya, Yemen, and other trouble spots to make dangerous Mediterranean journeys to Greece, Spain, Italy, Cyprus, and Malta. They are straining camps even as authorities work to resettle refugees away from the overcrowded sites to lessen spread of the coronavirus.

Churches and Christian agencies have remained at the forefront of efforts to document Christian persecution—a leading contributor to the crisis—and to resettle qualifying refugees to new countries. While the Trump administration on other fronts has stood by such constituencies, on this issue it’s moved decidedly against them. In 2015 the United States admitted more than 18,000 Christians from 50 countries ranked by Open Doors for persecuting Christians. For 2020 the number admitted to the United States from that list is projected to be less than 1,900 refugees—a 90 percent decline.

Those stats are underscored in a July report issued jointly by Open Doors USA and World Relief. Open Doors President David Curry was blunt in his assessment: “The U.S. government has fallen down on this issue.”

Curry told reporters on July 10 that between 30,000 and 40,000 Christians in Syria “are in danger at this moment,” many of them recent converts threatened by militias allied with terror groups or Turkey. Of 5.5 million Syrian refugees currently registered with the UN, Curry said these should be prioritized for refugee status. “It’s a gaping hole in any U.S. strategy not to help Christian minorities and the persecuted,” he said.

Both groups got their start in postwar Europe. Brother Andrew launched Open Doors in the 1950s smuggling Bibles behind the Iron Curtain. The group has grown into a global persecution watchdog, publishing an annual World Watch List used by lawmakers, analysts, church prayer teams, and others. World Relief began in the 1940s as the War Relief Commission of the National Association of Evangelicals, delivering food and clothing to war displaced. In 1979 it began helping Vietnamese refugees and became the only evangelical resettlement agency authorized by the State Department.

“While our expertise as a ministry is in refugees and forced migration, Open Doors brings expertise and credibility in the reality of religious persecution facing Christians that compels many to flee,” said Matthew Soerens, World Relief U.S. director for church mobilization. “It made sense to jointly publish this report.”

Soerens and others have watched as the Trump administration has virtually dismantled a refugee system they believe is an expression of American values and the Christian gospel. Numbers tell a big part of the story: In 2015 the United States accepted 1,734 Christians from Iran; in 2020 it will accept an estimated 50 Iranian Christians. This year the United States has admitted 5 Christians from Syria so far. 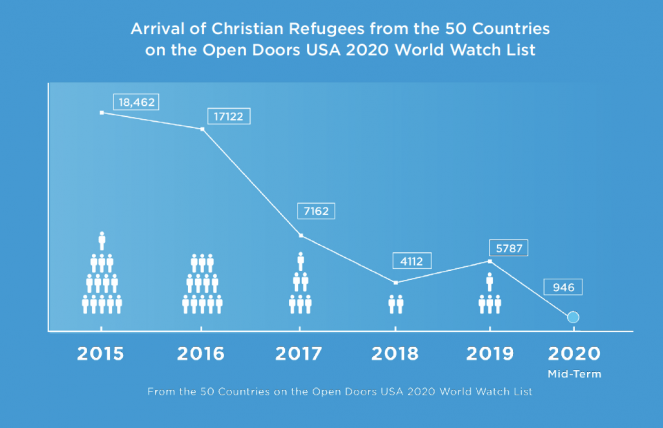 Now, the Departments of Justice and Homeland Security have proposed regulations to redefine key terms under the 1980 Refugee Act, including “persecution,” “well-founded fear,” and “torture”—each in ways that seem designed to more systemically reduce the number of individuals eligible for asylum. Those regulations will be finalized sometime after a 30-day comment period ends July 15.

Others have weighed in to support continuation of a refugee legacy that’s resettled on average 75,000 refugees annually in the United States since 1980. They include Trump appointees Tony Perkins, chairman of the U.S. Commission on International Religious Freedom, and U.S. Ambassador for International Religious Freedom Sam Brownback. They also include the Ethics and Religious Liberty Commission of Southern Baptists and key Catholic groups.

What can the rest of us do? We can pray, for persecuted Christians and for all refugees on land and at sea. We can pray for the church to come alongside them, and for authorities to protect them. We can petition our Washington representatives, along with the White House, National Security Council, and Departments of State, Justice, and Homeland Security to remember mercy and the security made possible when we welcome strangers.

Editor’s Note: WORLD has updated this story to correct the number of Christian refugees projected to enter the United States in 2020 from countries Open Doors ranks for persecuting Christians.