A battle against two viruses

Portia Makamba-Otto, a South African mother of four, first found out she had contracted COVID-19 in June when her flulike symptoms intensified after a week. Her husband took her to a hospital in the capital city of Johannesburg when she became weak and struggled to breathe.

The experience was extra harrowing for her because Makamba-Otto is also HIV positive.

Spending two weeks at an isolation center in the city, she remained on oxygen support as her breathing problems persisted. Her experience with HIV regularly brought her in and out of hospitals, but this was the worst yet: “At one point, I thought this was the end for me.”

Makamba-Otto made a full recovery and afterward returned to work in July as the treasurer at Sister Mura Foundation, which assists migrants living with AIDS. South Africa has the biggest HIV epidemic in the world, with 7.7 million people living with HIV. At the same time, it is the African country hardest hit by the coronavirus, with more than 680,000 cases and more than 16,000 deaths. The combined health crisis has made the situation especially difficult for HIV patients there, and AIDS organizations have had to find creative ways to reach this vulnerable population.

South Africa went into strict lockdown in late March, closing schools, shutting borders, and urging residents to stay home. The restrictions made it more difficult for people living with HIV to pick up their medicine. In South Africa’s eastern Gauteng province, the Department of Health reported a 20 percent reduction in medicine collections, totaling around 11,000 people.

“We found that with the lockdown, [HIV patients] were scared to leave their homes,” said Dino Rech of the Aurum Institute, a nonprofit working to eradicate HIV and tuberculosis. “We’ve seen some patients drop off treatment as a result of COVID.” While South Africa began a gradual reopening in June, some restrictions on public gatherings remain. 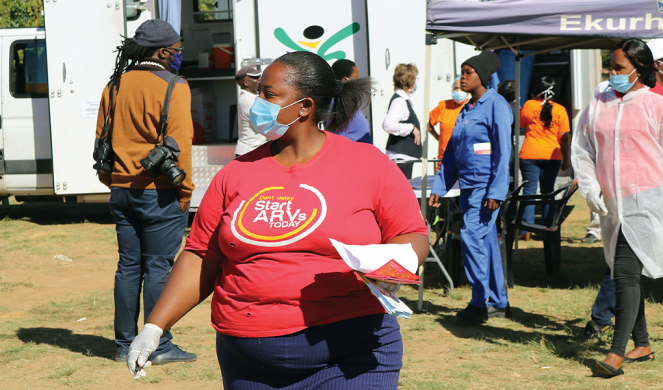 A team from the Aurum Institute screen and test people for COVID-19 at the Marikana informal settlement in Kempton Park, Ekurhuleni, Johannesburg. Aurum Institute

A report from UNAIDS revealed health centers recorded some form of interruption to HIV prevention and treatment services due to the pandemic between February and May in 11 of 16 countries, including South Africa. A May model by UNAIDS and the World Health Organization estimated that a six-month disruption of antiretroviral therapy (ART) could result in more than 500,000 additional deaths from AIDS-related illnesses. (In 2018, an estimated 470,000 people died from AIDS-related deaths in sub-Saharan Africa.)

Facing these realities, AIDS organizations used unconventional approaches to reach HIV patients. Late in April when the J. Dumane Clinic in Gauteng province briefly shut down after confirming its first coronavirus infection, the group set up a mobile clinic in the parking lot. Outside the truck, white tents shielded hospital beds and staff members as they distributed prescriptions and ran HIV and tuberculosis tests.

The Aurum Institute started to run about 300 medication home deliveries each day across the country. The center scaled up its drug depot services, called Pelebox. The system alerts patients by text message when their medications are ready and available at the depot units.

As staffers noticed a 30 percent dip in the number of patients entering and leaving their facilities, they ramped up support services, including an increase in phone calls and additional COVID-19 support to their regular messaging services. “We tell them if you stay on treatment, your immune system is high and you won’t be at higher risk,” Rech said.

To protect its own healthcare workers, Aurum reduced the number of staff in every office, provided them with protective equipment, and held weekly digital meetings to keep the team motivated. Still, the group suffered its own losses: Three staff members died from COVID-19, and 500 of its 3,000-member team contracted the virus. 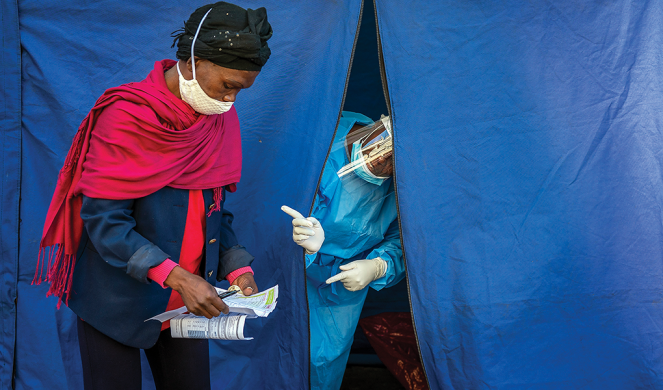 At AIDS Foundation South Africa, workers moved many support group meetings to WhatsApp. They started to deliver ART services directly to the homes of patients, along with hygiene and food packs. (Pandemic-related job losses have made it harder for HIV patients to afford both medicine and food.)

Nesri Padayatchi and Kogie Naidoo, who work with the Centre for the AIDS Program of Research in South Africa, called for more at-home HIV testing, scaled-up bulk drug prescriptions, and additional community health workers to track down patients who may slip through the cracks.

Sister Mura Foundation, where Makamba-Otto is treasurer, is trying to prevent patients from going without help. It’s providing medications and food to migrants who lost part-time jobs while following safety protocols.

For those like Makamba-Otto involved in HIV work, assisting people in need trumps fear of the coronavirus. Still, she admits her bout with COVID-19 was horrible.

“I always thank God that at the foundation, I was the only one who went through it, because I wouldn’t wish it even on my worst enemy.”