Back in the 1990s, photographer Chris Arnade worked as an analyst on Wall Street, and he would go on long walks to relieve his stress. The walks got longer and longer, to the point that he quit work and began documenting the stories of the people he met on his walks in New York’s downtrodden neighborhoods.

He spent several years photographing and interviewing residents of the Bronx neighborhood of Hunts Point and then traveled elsewhere around the country, turning his findings into a book, Dignity: Seeking Respect in Back Row America. His Jacob Riis–style exposure of what he calls the “back row” of America gives a record of those left out of the American dream: the drug addicted, the homeless, the discouraged.

Arnade and I spoke at his home in upstate New York, where he tends a menagerie of animal outcasts: a dog named Zumi, a cat from a crack house, snapping turtles in the pond who love chicken nuggets, and about 30 groundhogs who were attempting a takeover of the area under his porch.

What’s your quick definition for “front row” and “back row”? It’s, “Did you go to an elite college or not?” I used to do the McDonald’s test: Is it an icky place with unhealthy food? Or is it a place where it’s wonderful and you like to hang out?

You’ve spent a lot of time at McDonald’s interviewing the “back row.” What’s your favorite item on the menu? I always go for the dollar menus because I’m cheap. I get my latte every morning. Usually I go for the two-for-$5 special if they have it, and I’ll get two Big Macs. The key to McDonald’s is to get rid of the cheese. There’s something about fast-food cheese.

How did your experience as a Wall Street trader lead to this attention to the back row? I was shocked how provincial New York City is. I worked at Salomon Brothers, a high-end firm. There were people in my office who were worth X-million, who had spent all their life in New York City and never been to Brooklyn. Even though my office was still dominated by lacrosse players from Harvard, there was a former elevator repair guy who was really good with numbers. The dad of one of my bosses was a firefighter. By the end of my time in Wall Street, people had the same resumé—a kid who was the valedictorian, went to Harvard or Princeton, and then did nonprofit work for the summers. They’re good employees, but it felt like paint-by-numbers.

‘On Wall Street, nobody was ever happy with their pay because they always knew that someone made a little bit more. And the people on the bottom, it’s implied that they lost.’

Did that change in what jobs were available to those in the back row lead to some of the societal despair you documented? It’s a system that makes nobody feel valued, because the system says, We’re ranking people based on how intelligent you are, which we translate into how much money you have. On Wall Street, nobody was ever happy with their pay because they always knew that someone made a little bit more, and they had gotten into this rat race of three homes. You can say, That’s your own fault. But it’s what society expects of people. And the people on the bottom, it’s implied that they lost. We pretend that it’s a meritocracy, so it’s your fault if you don’t succeed. So it makes the people at the bottom not only frustrated but humiliated. I don’t want to be on record for saying I understand why people would kill themselves. But I understand why people would kill themselves in that system.

So you think the growing divide between front row and back row has something to do with the growing number of “deaths of despair” from suicide and overdose? It’s clear that something is very, very wrong. Life spans are going down. Suicide is a stunning act. Animals don’t commit suicide. Addiction, to me, is a form of suicide. It’s not about lacking iPhones or lacking cars. There’s a spiritual lacking there. And I say this as someone who is a self-described atheist.

How do we change? I don’t think it’s fixable by any policy, because we overvalue rationality and material things. We’ve made meaning all about how much you have. I feel like one of the solutions is faith. One of the wonderful things about faith is you don’t have to have much to have it. It’s free. 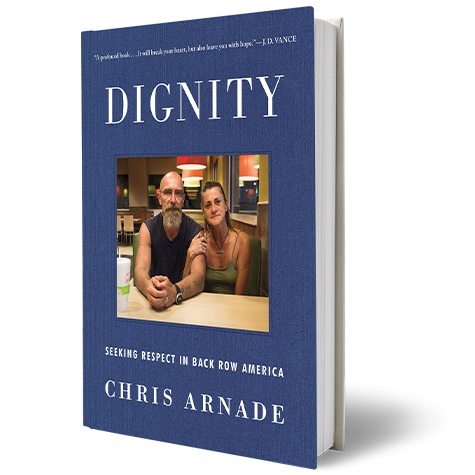 Are you calling for revival in the United States? I suppose. Again, I’m not religious, but the secular shift has not worked. And I don’t just see religion as having a utility. I learned through this project that maybe religion is just as right as sciences. Maybe my privilege and the privilege of a lot of people like me is obscuring the evidence for religion. We’ve removed ourselves so much from the messiness of life that we don’t see the evidence for faith as being true. I’m on unsolid ground here because I’m speaking about theology, but for me religion is about being humble. One of the things that comes with privilege is hubris. So in some sense, you’re removed from the humility that allows you to understand other things greater than we can understand.

Were you ever tempted by the spiritual things you were exposed to in the course of reporting? I don’t think I have the humbleness, to be honest. But it’s very appealing to me.

You started this project before President Donald Trump was in the picture. Did you see him coming? About halfway through my project, he announced his run for the presidency. I laughed. But five days later, I went on a two-month trip across the country, and within three days, I thought, This guy is gonna win. The people I was talking to wanted things changed. They also liked that he was a traitor to his class—making fun of the elites, even though he was wealthy. And he was doing it in crude language they understood. It was kind of like: You guys have been making fun of us for so long. We are fat slobs who eat in ugly restaurants. And this guy’s making fun of you now.

Did the people whom you interviewed vote? I think most of them didn’t. Some people have made fun of the book as being simply about Trump voters. I’d say 80 percent of the people in the book didn’t vote for Trump. And I’d say roughly over half didn’t vote—they have a felony charge, or lots of other issues. But also, I didn’t meet anybody who felt anything but disenfranchised. Your one vote’s not going to change anything.

What’s your advice for the front row to engage the back row? Just talk to people and listen. Some of them you are not going to like. Some of them are not nice people. But others may have shared interests. If your shared interest is the New York Giants, talk about the Giants. In some ways, I understand why people don’t engage. It’s like, once you know how your food is made, you don’t eat. Once you realize how unjust the world is, it’s kind of hard to enjoy it. It’s partly why I haven’t looked at my pictures in a long time.