Ulrica Fontenot and her daughter Takeisa pray after leaving flowers at a small memorial outside of Santa Fe High School Saturday. Getty Images/Photo by Scott Olson

UPDATE: The suspect in Friday’s high school shooting in Santa Fe, Texas, began his rampage by firing a shotgun blast through an art classroom door, according to witnesses Saturday. Several students ran to the door to block 17-year-old Dmitrios Pagourtzis from entering, but he fired again, this time fatally wounding a student in the chest. Pagourtzis then killed seven more students and two teachers in a four-classroom area before exchanging gunfire with police and surrendering, officials said. Several students said they survived by playing dead. The Pagourtzis family released a statement Saturday offering prayers and condolences to the victims but said the shooting “seems incompatible with the boy we love.” The family said it remained “mostly in the dark about the specifics” of the attack and shared “the public’s hunger for answers as to why this happened.” Authorities Saturday afternoon released the names of the 10 people who died in the shooting: teachers Glenda Perkins and Cynthia Tisdale and students Kimberly Vaughan, Shana Fisher, Angelique Ramirez, Christian Riley Garcia, Jared Black, Sabika Sheikh, Christopher Jake Stone, and Aaron Kyle McLeod. The FBI in Houston tweeted Saturday that 13 people were wounded in the attack, up from earlier reports of 10. Hospitals reported treating 14 people with injuries related to the shooting on Friday, but the reason for the discrepancy was unclear.

UPDATE (3:50 p.m.): A Galveston County official said Saturday that the suspect in Friday’s high school shooting in Santa Fe, Texas, exchanged “a lot of firepower” with police officers before he surrendered. Judge Mark Henry, the county’s chief administrator, said Dmitrios Pagourtzis, in addition to a shotgun and handgun, was armed with several kinds of homemade explosive devices, including carbon dioxide canisters taped together and a pressure cooker with an alarm clock and nails inside. But Henry noted that the canisters had no detonation device and the pressure cooker contained no explosive material. Pagourtzis yelled, “Surprise” before the attack at Santa Fe High School, according to Texas state Rep. Michael McCaul, chairman of the House Homeland Security Committee. McCaul, a former federal prosecutor, said he expects the U.S. Justice Department to pursue additional charges against the 17-year-old student, possibly involving weapons of mass destruction. Meanwhile, students were allowed back into Santa Fe High School Saturday to retrieve belongings they left behind. Walter Braun, the Santa Fe Independent School District’s chief of police, said at a news conference that students would enter in groups of no more than 10 accompanied by officers.

UPDATE (11:21 p.m.): The 17-year-old student charged with murdering 10 people at a Houston-area high school Friday admitted to authorities he carried out the attack. Dimitrios Pagourtzis, according to a probable cause affidavit, told investigators that when he opened fire at Santa Fe High School, “he did not shoot students he did like so he could have his story told.” Although authorities have not determined a motive, Texas Gov. Greg Abbott said Pagourtzis wrote about his plans for the attack in journals found by police on his computer and cellphone. “Not only did he want to commit the shooting but he wanted to commit suicide after the shooting,” Abbott said, adding that Pagourtzis told authorities he “didn’t have the courage” to take his own life. Authorities have charged Pagourtzis, who is being held without bond at the Galveston County Jail, with capital murder. Classmates described Pagourtzis as quiet and an avid video game player who often wore a black trench coat and black boots to class. Sophomore Zachary Muehe told The New York Times that Pagourtzis entered his art classroom armed with a shotgun and wearing a trench coat and a T-shirt emblazoned with the words “Born to kill.” Father Stelios Sitaras of the Assumption of the Virgin Mary Greek Orthodox Church in Galveston, said the Pagourtzis family are members of a nearby parish and that he met the teenager when he took part in the church’s annual Greek festival in the fall. “He is a quiet boy,” Sitaras said. “You would never think he would do anything like this.” Houston-area hospitals reported on Friday they were treating a total of 14 people for injuries related to the shooting. School police officer John Barnes, who was shot in the arm when he confronted the gunman, is in stable condition at University of Texas Medical Branch in Galveston, according to officials there. Family members confirmed that substitute teacher Cynthia Tisdale was among those killed, and the Pakistan Embassy in Washington, D.C., identified foreign exchange student Sabika Sheikh as one of the other victims.

UPDATE (5/18/18, 3:25 p.m.): Texas Gov. Greg Abbott confirmed 10 people died and 10 others suffered injuries in the shooting at Santa Fe High School on Friday morning. Police are continuing to search for more explosive devices at the home of 17-year-old Dimitrios Pagourtzis, identified as the attacker. Abbott said the guns Pagourtzis apparantly used in the attack, which included a shotgun and a .38 revolver, belonged to his father. Friends described the teen as a quiet student who never talked about killing people. But his Facebook page, which has since disappeared from the social network, featured photos of Pagourtzis wearing a T-shirt that said “Born to kill” and clothes adorned with German nationalist iconography. Abbott said that unlike with other recent shootings, including Sutherland Springs, Texas, and Parkland, Fla., this accused shooter did not exhibit “red flag” warning signs that might have alerted officials to his plans.

UPDATE (5/18/18, 2:40 p.m.): Law enforcement officials have identified the suspect in the Santa Fe High School shooting as Dimitrios Pagourtzis, a 17-year-old member of the school’s junior varsity football team. Pagourtzis also participated on a dance squad at a local Greek Orthodox church. Authorities have not identified a person of interest who was detained after the shooting. The Houston Chronicle reported that the shooter brought an extensive arsenal to the campus: a pistol, a shotgun, and pipe bombs. Eight students taken to a nearby hospital have gunshot wounds. Doctors have treated and released six, but one remains in critical condition and another in fair condition. First responders transported three other victims to another hospital, all with gunshot wounds. One is an 18-year-old student, and another a middle-aged woman. The attacker shot both in the leg. The last victim is a retired Houston police detective working as a campus police officer. He suffered a gunshot wound to the arm but lost a lot of blood. He is listed in critical condition. The hospital in Galveston plans to hold a blood drive later Friday. Officials previously confirmed between eight and 10 people died in the shooting.

UPDATE (5/18/18, 1:30 p.m.): Authorities say they are working to disarm explosive devices in and around Santa Fe High School near Houston, Texas, after a shooting there Friday morning. “Evidently this guy threw pipe bombs all in there,” an anonymous official told the Houston Chronicle. “We don’t know if any of them went off.” The Santa Fe Independent School District told locals on Twitter, “Do not touch any items out of place and call 911” if they see any suspicious items.

UPDATE (5/18/18, 11:58 a.m.): Harris County Sheriff Ed Gonzalez said at least eight people and possibly 10 died in a high school shooting near Houston this morning. Most of those killed were students, Gonzalez said. Police arrested one suspect and detained a second person, both students, as well.

OUR EARLIER REPORT (5/18/18, 11:21 a.m.): Local media are reporting multiple deaths in a shooting at a Houston-area high school. Santa Fe High School assistant principal Cris Richardson said a suspect “has been arrested and secured” but declined to comment on the number of injuries and fatalities. Police were evacuating the building, and three Life Fight helicopters had landed near the school Friday morning. One student told KTRK-TV in Houston in a telephone interview that a gunman came into her first period art class and started shooting. The student said she saw one girl with blood on her leg as the class evacuated the room through a back door. “We thought it was a fire drill at first, but really, the teacher said, ‘Start running,’” the student said. Santa Fe is a city of about 13,000 residents roughly 30 miles southeast of Houston. 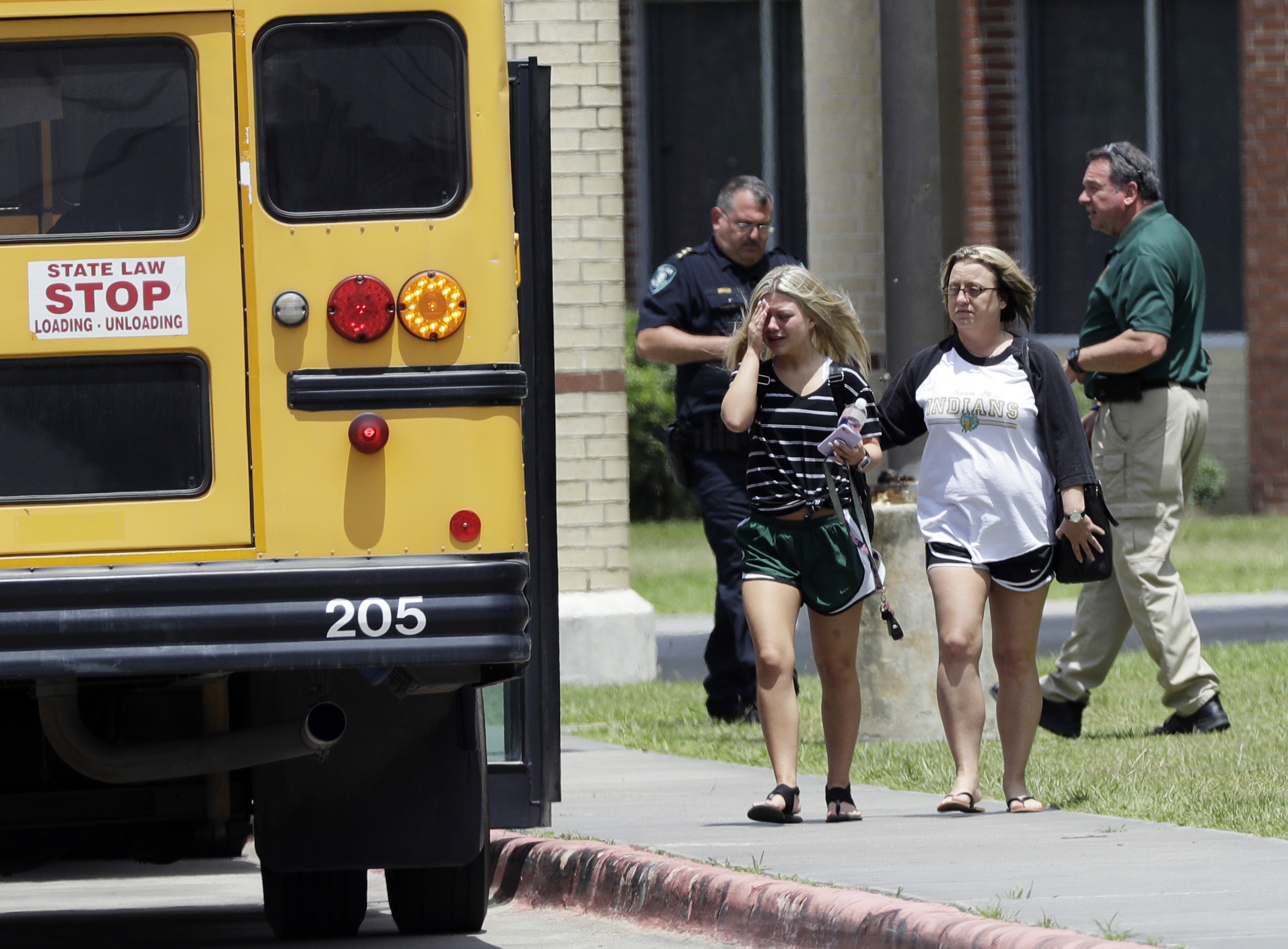 A student reacts after retrieving her belongings inside Santa Fe High School on Saturday. Associated Press/Photo by David J. Phillip 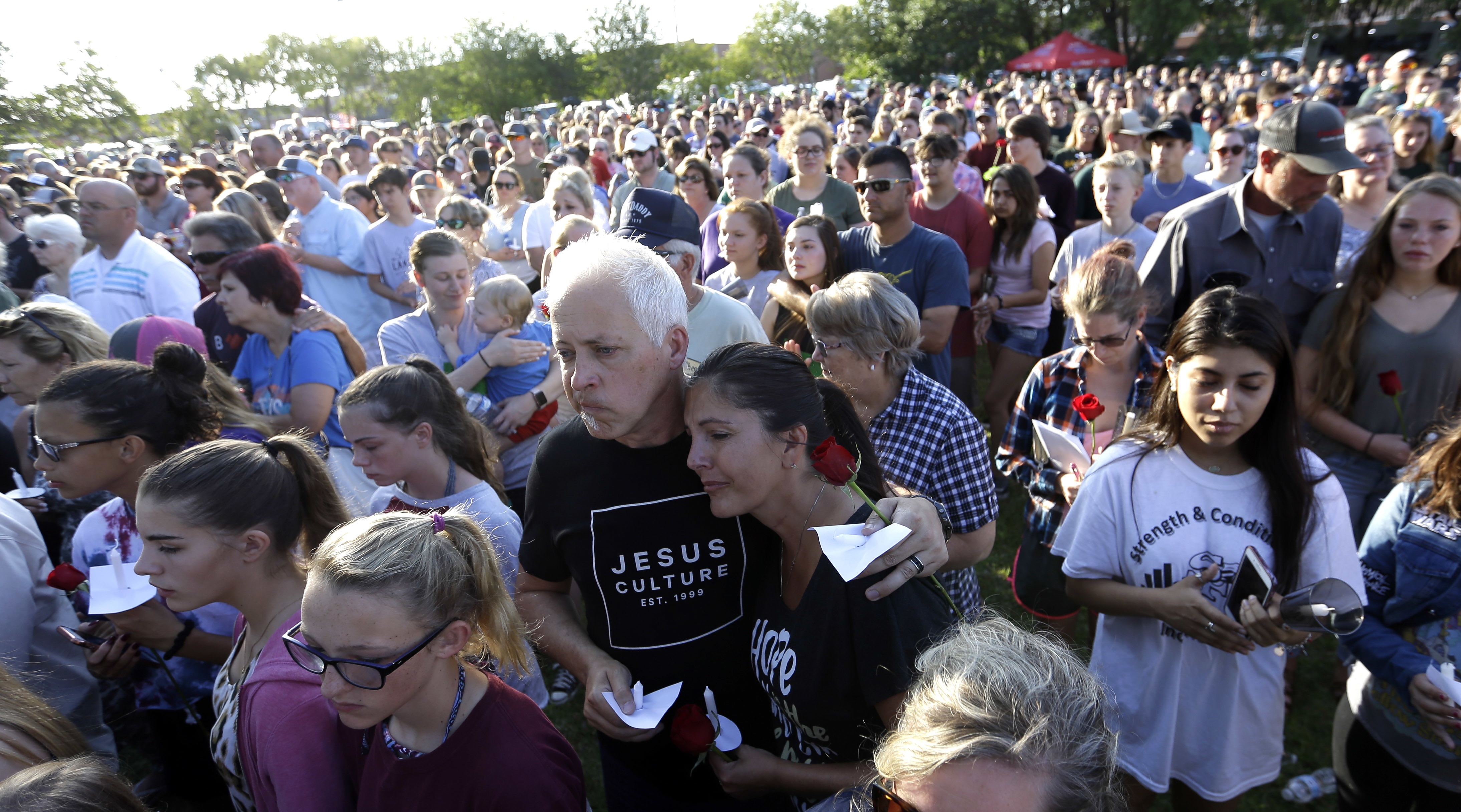 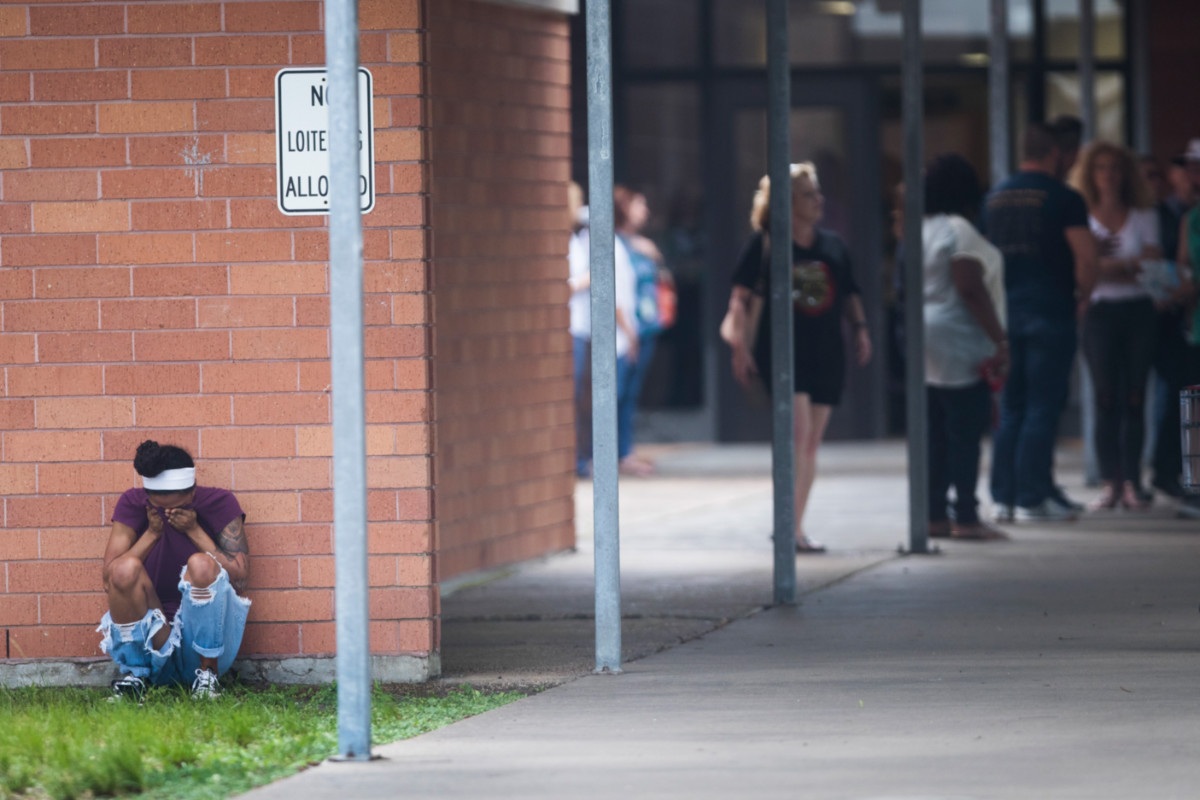 People gather by the Barnett Intermediate School where parents are gathering to pick up their children. Associated Press/Photo by Marie D. De Jesus/Houston Chronicle 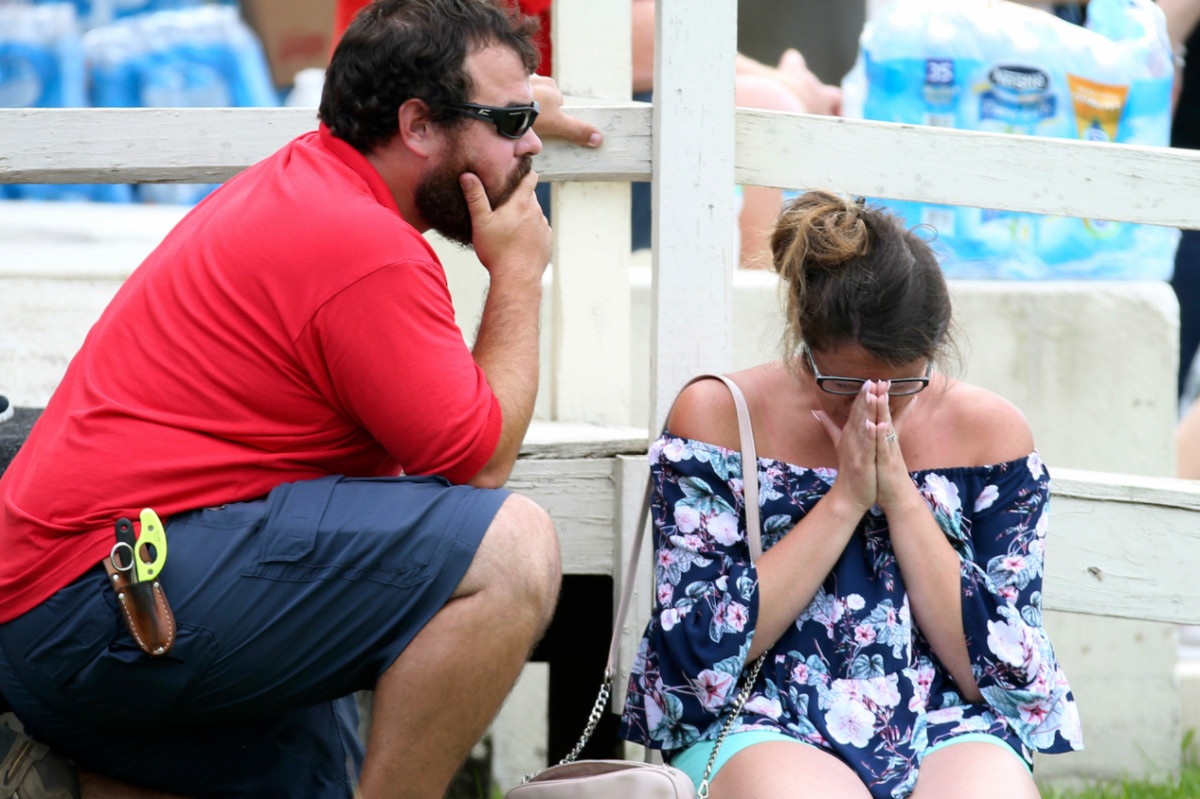 A woman prays outside the Alamo Gym, where students and faculty are being brought after a shooting at Santa Fe High School. Associated Press/Photo by Jennifer Reynolds/The Galveston County Daily News 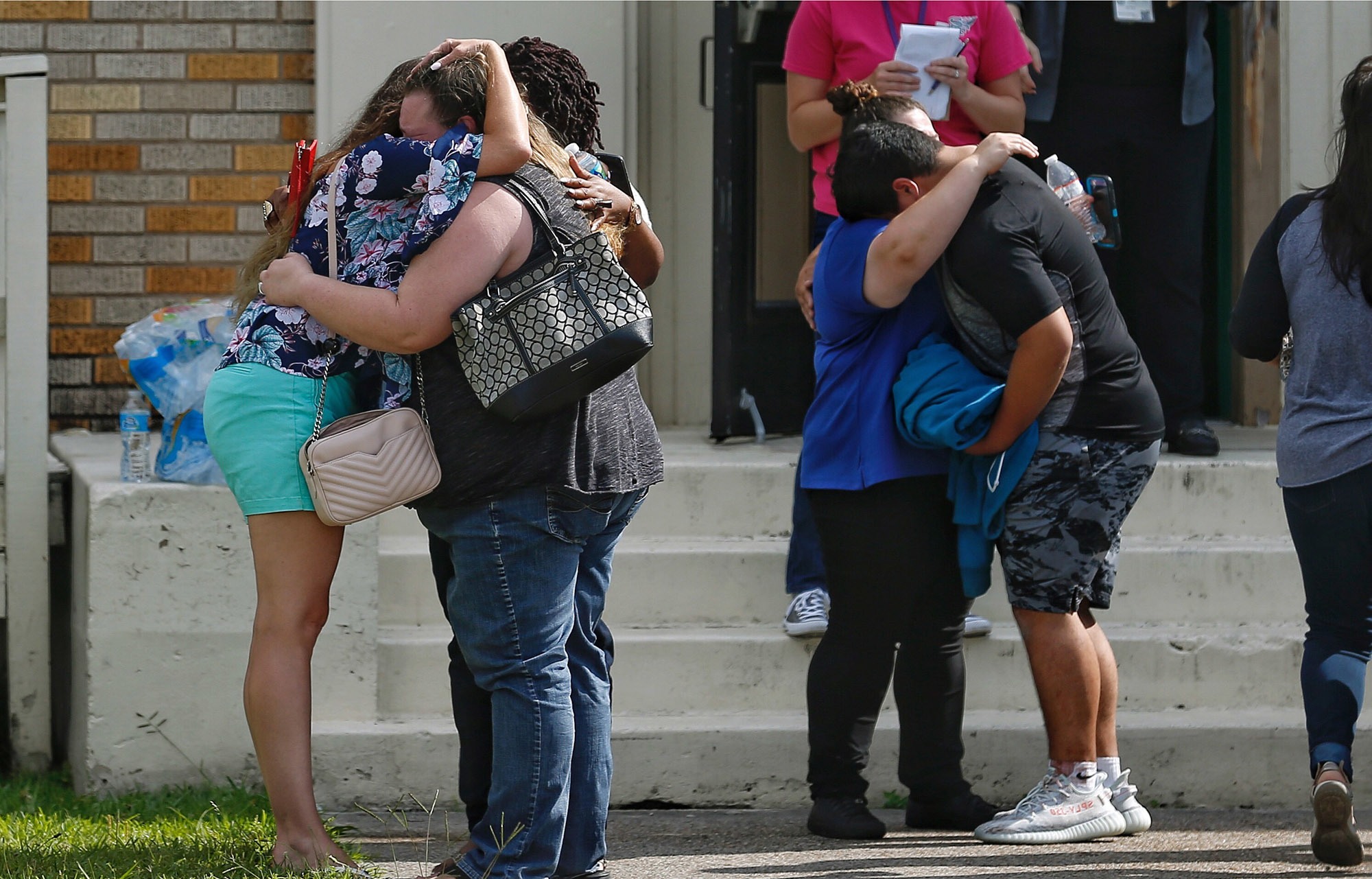 People embrace at a staging area where parents picked up Santa Fe High School students after a shooting there Friday. Associated Press/Photo by Michael Ciaglo/Houston Chronicle 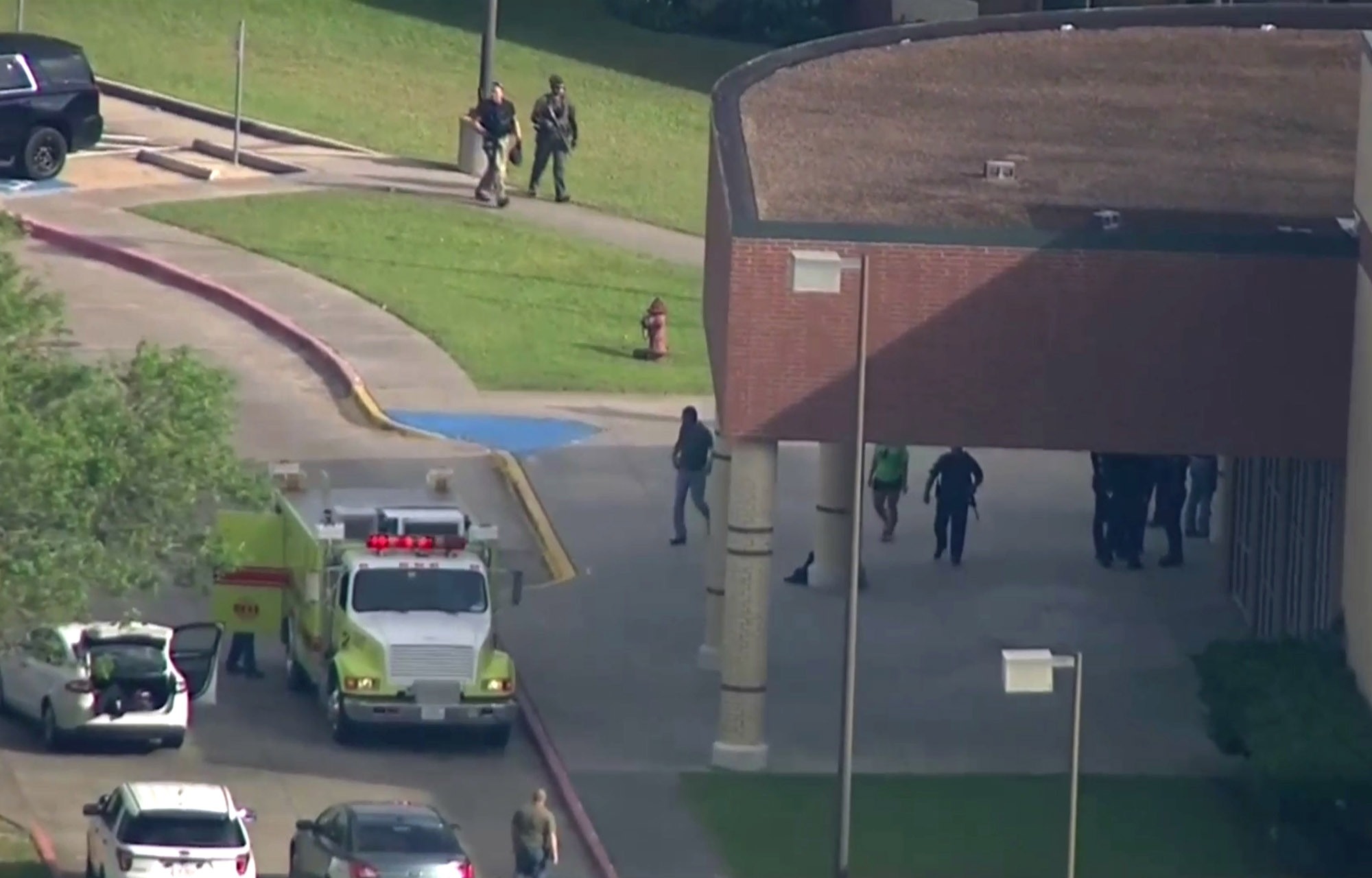 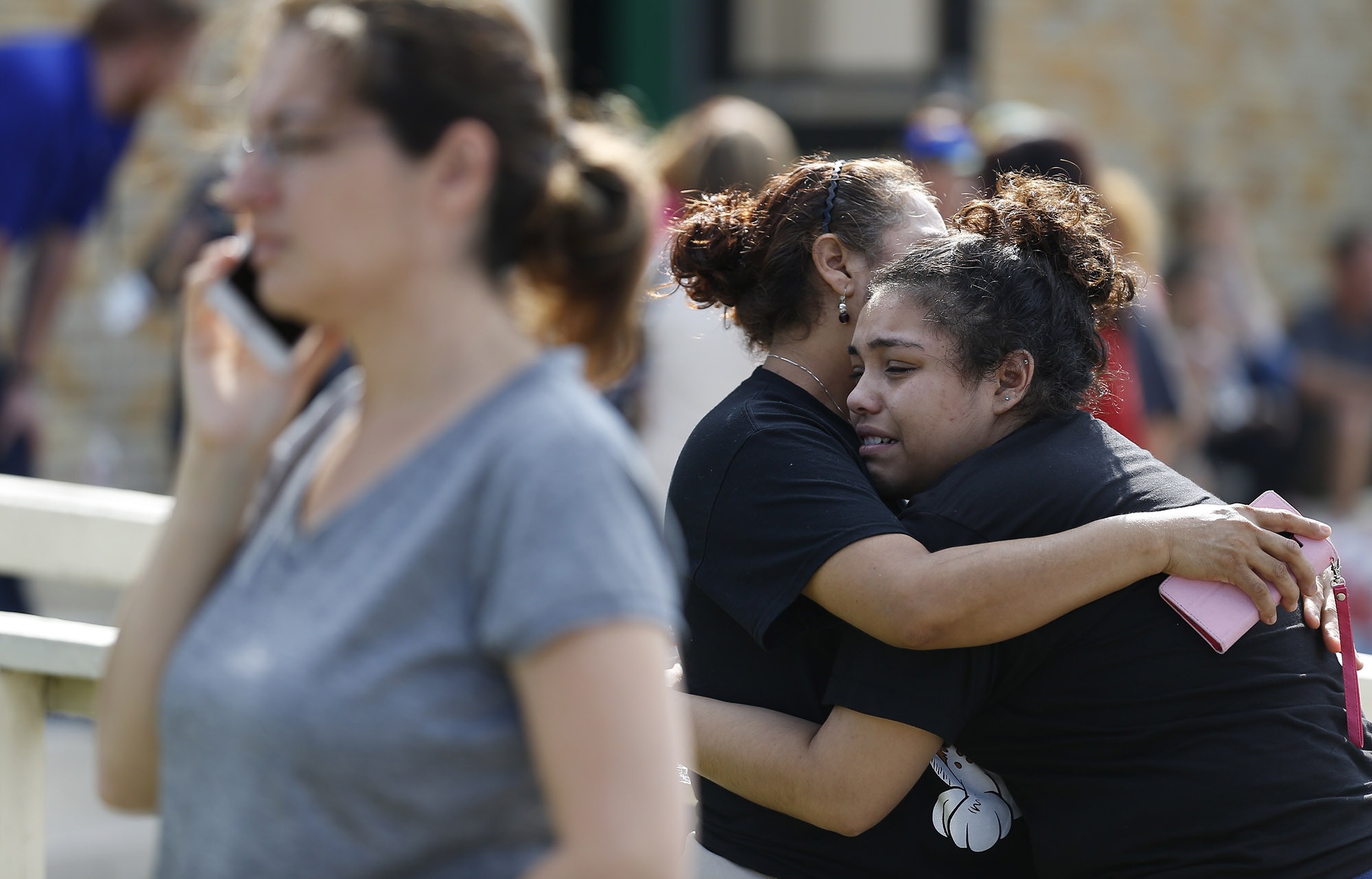 Protests nationwide, but no “Night of Rage”
Abortion businesses shut down in wake of SCOTUS ruling
Democrats seek tech privacy probe as Roe falls
West Coast governors line up behind abortion
COMMENT BELOW