Christians in the Roman countryside

Thomas A. Robinson’s Who Were the First Christians? Dismantling the Urban Thesis critiques the now-common understanding that early Christianity had an urban basis and from city strongholds went out into the countryside. Robinson shows how we have only guestimates about the overall population of the Roman Empire as well as how many Christians and Jews there were, so we should be wary of all demographic claims.

The following excerpt, courtesy of Oxford University Press, summarizes his conclusions and stresses the importance of the rural element in Christianity’s early growth. Robinson’s report is relevant today when pastors compete for openings in hot cities but sometimes look down at small town and rural opportunities. That’s too bad. People in cities need Christ, but so do people in unfashionable areas, and it’s not necessarily true that urban influence will move outward.

Robinson’s book was featured in WORLD’s 2017 Books of the Year issue. —Marvin Olasky

On a number of grounds I have contested the widely held hypothesis that early Christianity was largely urban. One, the numbers usually put forward do not work; major adjustments would need to be made to current calculations about the expansion of Christianity if a rural component is not factored in. Two, the definition of what is to count as urban and what as rural varies so widely within scholarship that the terms become almost meaningless, particularly when the definition of what an urban area is seems largely arbitrary and idiosyncratic, both in the ancient world and, more troubling, in modern scholarship. Three, inhabitants of the countryside flowed into the city and rustics constituted a significant part of the city’s residents, so much so that it becomes misleading to think of urban centers as devoid of or immune to some considerable rustic complexion. Fourth, the “urban thesis,” at best, is a skewed perception, based more on the ratio of Christians in the respective urban and rural populations than of actual numbers.

I see my work primarily as an attempt to dismantle what I perceive to be a defective consensus view. Such dismantling, even if only partly successful, will require a fresh analysis of the complexion of early Christian communities. My sense is that such a rethinking of early Christianity’s portrait and place in the Roman world must have at least a bit more rustic coloring in its complexion and a bit more rural territory in its reach.

But I recognize that dismantling is the easier task, and thus I submit my work as a necessary but hardly a complete contribution to that effort. Any major reimagining of the complexion of the early Christian movement as a result of the dismantling or revising of the urban thesis will be a long-term and multifaceted effort from the pens of many—scholars who are convinced either by parts of the present critique of the urban thesis or by fresh descriptions of rural/urban relationships in the empire, and who then find ways to incorporate some of these reflections into fields in which they have expertise.

I started out by pointing to two prominent scholars in recent debates about the expansion of early Christianity. Both insisted that it was important to put numbers to things. On that point I agree. But I have not been comfortable with the numbers that either of these scholars offered, or for that matter with any numbers offered anywhere. The most hopeful success for a reasonably secure number is for the population of the Roman Empire as a whole, since there are various methods by which that might be determined, though still with a considerable margin of error. Even here the proposals are fairly wide-ranging.

Because of this, impressions must be tested. We must at least attempt to visualize what the empire must have looked like on the framework of the various numbers that have been proposed. That has not been done, and as we have seen, sometimes we have been carried, quite unaware, into supporting reconstructions that are not simply unlikely but, in fact, impossible and absurd. The numbers must be made real. We must populate the streets of these ancient cities with the full contingent of people we have proposed. What does the city look like? Can it carry the population we have placed there? Can we read ancient literature and examine archaeological remains and confirm that in our calculation of numbers we have populated these streets with some degree of probability? Ramsay MacMullen has tried an exercise of this kind for the number of people that might be accommodated within the space of urban church architecture. The usefulness of such visualization may be more in its corrective and cautionary function than in its ability to construct a new portrait of early Christianity, but even that would be of considerable value given the kinds of impossible scenarios that have been presented as convincing and accepted as certain. Had such an attempt at visualization been done with the numbers proposed by Rodney Stark, the need for substantial revision or complete discarding of his now highly popular and widely propagated numbers would have been obvious from the start.

Sometimes we have been carried, quite unaware, into supporting reconstructions that are not simply unlikely but, in fact, impossible and absurd.

Must we abandon all attempts at specifying raw numbers or percentages of Christians or of Jews in the Roman Empire? I think we must. We are confronted, it seems, by the necessity of numbers and the impossibility of numbers. This is not a good position to be in, but it is a better situation than being wrong about numbers that we have accepted as reliable. Yet we cannot free ourselves completely from some notion of the size of the early Christian movement. Such a sense arises quite unconsciously from various impressions left by the scattered literature and by the crumbling ruins that each investigator has encountered, leaving one person with the sense that Christianity was sizable and another person with an equally strong sense that Christianity was barely on anyone’s radar. Such an unsettled state has probably made us too willing to cling in hope to anything that seems to offer something more grounded, whether MacMullen’s mere 1% based on architectural space or Stark’s near-saturation based on Mormon growth rates. I am not convinced that we are better off with either of these seemingly more concrete efforts than we are with mere impressions.

The most blunt and baffling matter that needs correction is the assumption that there could have been a significant Christian presence in the empire without a sizeable rural component in the Christian membership. A largely urban Christian movement constituting about 10% of the empire around the year 300 cannot be made to work by any mental or mathematical gymnastics, yet that has been a widely accepted reconstruction— indeed, the most widely accepted. And that impossible reconstruction is made even more impossible when a substantial component of diaspora urban-centered Jews is added to the equation.

In part, the placement of Christians (and Jews) in urban areas of the empire has come about from the flawed perception that the urban and rural domains represented alien and mutually exclusive worlds, and that, for Christians, nearly insurmountable barriers faced any effort to take their message to the countryside and to those of rural and rustic attachments. But such a view is challenged by almost everything we know about how the rural and urban domains meshed with and depended on each other—if, indeed, we can even speak of these as clearly distinguishable domains in terms of the kinds of people who lived there. Perhaps the more significant categories would be the urbane and the rustic, but even these concepts are more caricatures than portraits and are used by the ancients as such.

As to the presence of Christianity in the countryside, if Christians represented even a small minority in the Roman Empire (say, 5%), then some element, and perhaps a substantial element of the Christian movement, almost certainly would have been rural-based. Simply to increase the degree of urbanization in the empire in order to accommodate a larger number of Christians (even if that were a credible motivation) does not lessen the likelihood of a rural Christian presence; rather, it may increase it. Urban areas generally depended on an influx of rural people to keep their population stable, and the more rural people who made urban areas their home, the more rustic the urban areas would have felt and been. Further, a web of links to acquaintances and relatives still in the countryside would have been created by that kind of influx, a network that the Christian movement could have exploited.

If Christians represented even a small minority in the Roman Empire (say, 5%), then some element, and perhaps a substantial element of the Christian movement, almost certainly would have been rural-based.

Supposing, then, that it is likely—or at least possible—that Christian assemblies existed in rural areas throughout most of the early history of the movement, can we determine what these churches might have been like? The once common view of the countryside as an abode of protest, fringe, or schismatic movements, devoid of Christian groups of a more orthodox flavor, must be set aside. It is unlikely that such groups would have had any greater appeal to a rural audience than would more orthodox forms of Christianity. Indeed, these movements were generally marked by a moral rigor that would have made them far less likely open to rustics— and rustics far less likely open to them.1

There is really no reason to suspect that urban and rural churches would have been inherently starkly different from each other. Their leaders may have met together regularly, and it is possible that some rural Christians made their way into nearby towns for common assembly or even that urban Christians joined believers in a gathering in a village, perhaps reflecting family connections, longtime friendships, or patron/client relations. The situation probably differed in various degrees from location to location and from individual to individual. Certainly given the natural and routine interchanges between urban and rural areas, nothing requires that urban and rural Christian assemblies be of a significantly different theological orientation or communal practice. More likely would be the case of largely shared beliefs and practices by urban and rural members of an area, perhaps under the influence of a particularly dynamic or devout personality. Such churches, if differing at all, may have differed more from churches in other territories than from each other. And whatever diversity Christianity came to express, it is at least as likely that each group had both urban and rural followers than that a theological position or point of practice was distinctively and exclusively urban or rural.2

1. This includes groups such as the Montanists, the Novatians, the Donatists, and the Meletianists, and in some presentations of this kind of reconstruction, with monasticism included too. The case for the rural character of these groups has never been strong, since whatever their rural component, they had an urban component as well, with perhaps only the Montanists originating in the countryside (see the section “Treating Rural Christianity as Abnormal” in chapter 8).

2. For example, both sides in the Donatist controversy had rural and urban adherents. Modern attempts to read the Donatist movement as rural have failed. See Peter Brown, “Christianity and Local Culture in Late Roman Africa,” JRS 58 (1968): 85–95; A. H. M. Jones, “Were Ancient Heresies National or Social Movements in Disguise?” JTS 10.2 (1959): 280–298. 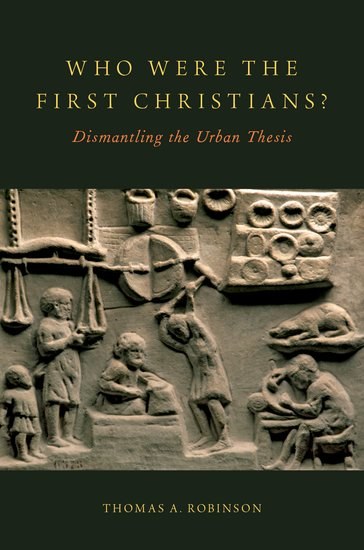