An elderly woman who calls herself Jermeus poses for a photo in front of the hospital destroyed by the earthquake in Fleurant, Haiti, Tuesday, Aug. 17, 2021, three days after the 7.2-magnitude quake hit the island nation Fernando Llano/Associated Press Photo 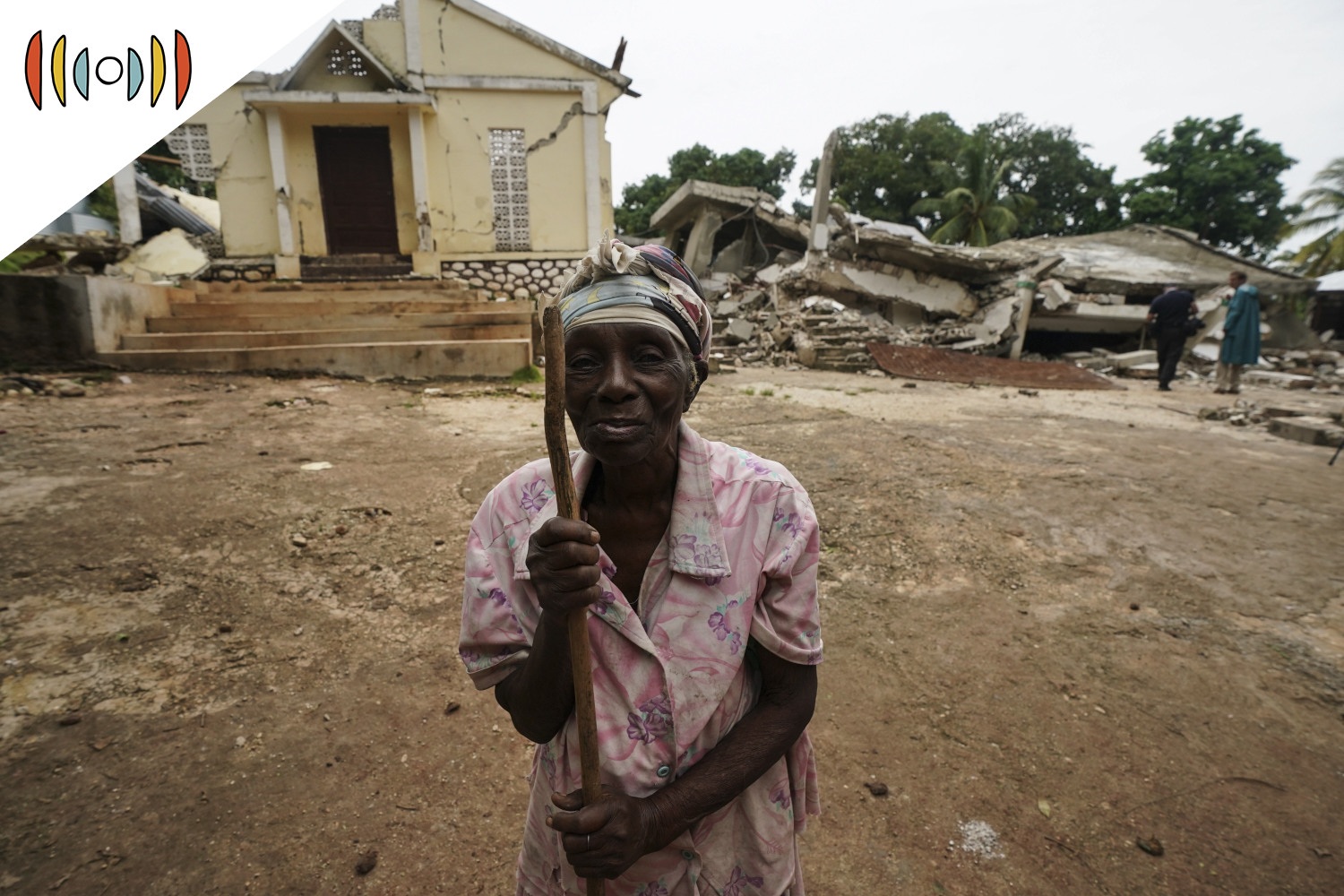 MARY REICHARD, HOST: Coming up next on The World and Everything in It: a World Tour special report on Haiti, where a 7.2 earthquake struck Saturday morning along the island’s southern coast.

And on Monday, a tropical depression added to the country’s misery, dumping as much as a foot of rain.

LAKO: And we visited Les Cayes, went to different parts of the city and saw firsthand some of the damage. The first one was a totally collapsed hotel, where big equipment, heavy equipment was already removing debris, loading it into a truck. Then we saw damaged homes, sometimes totally collapsed. We saw a couple of churches that were damaged and collapsed.

Not all of the damage is that bad. But even when homes are still standing, people are too scared to stay indoors.

LAKO: And since they are afraid of aftershocks, and they're maybe already damaged homes further breaking down, they are afraid and kind of that fear factor was probably that struck me the most, that even if their houses were not damaged or just had those those cracks, they were still afraid to be inside.

More than a thousand people died in the earthquake and 6,000 suffered injuries. Many thousands more were left homeless.

Because people are staying outside, Lako says tarps and tents will be in high demand. But that’s not a good long-term solution.

LAKO: They certainly do not do not want to go back to like the tent city sort of camps they had after the 2010 earthquake. So we collectively want to learn lessons from things that were done right, but also things that have gone wrong in the 2010 response, and you know, those tent cities are surely not part of the answer.

Aid groups in Haiti have experience with what doesn’t work, but also with what does. Dr. David Vanderpool runs a hospital in the village of Thomazeau,.

VANDERPOOL: We worked extensively in the 2010 earthquake, that's what brought us to Haiti, we set up a large hospital right after the earthquake and did a lot of surgeries there to care for the people. And so we've got quite a bit of experience with disaster relief.

Thomazeau is about 100 miles from the epicenter of Saturday’s quake. But Vanderpool and his team felt the tremors.

VANDERPOOL: And so we began to mobilize our efforts and contact people that we know in that area, to be able to transport food, medical supplies, as well as medical teams down into that area. Our hospital is open and working. And so we'll be able to receive patients who were injured in the earthquake. We very fortunately have electricity 24/7 because we're solar powered, and, and we have internet as well. So we're able to, to work pretty efficiently in this disaster.

But getting people in and out of the disaster zone isn’t easy.

VANDERPOOL: There's really just one main way into this area, and the roads are destroyed. And so we're not seeing a lot of traffic coming out yet. We hope that soon that we'll be able to, the roads will be able to allow trucks to carry people out of the area, perhaps boats will be able to do that. But as it stands right now, we've not received anyone from the quake in our facility.

Gang violence in the area is also hampering recovery efforts.

VANDERPOOL: In fact, one of the most primary gangs in the country is at that juncture, between the main body of Haiti and this peninsula, and they control that single road in. And so they also control the fuel depot in that area. And so fuel is very scarce right now. And then also, the violence is just crippling. There's just absolutely no way to safely get into that area, without some kind of military presence, which there are none.

Both Vanderpool and Rene Lako moved to Haiti after its last big earthquake. So they know bodies will heal and buildings will be repaired. But Lako says the long-term effects will linger.

LAKO: I think one thing that's that stood out to me is that a lot of these people and children are traumatized. And they will not only need physical help or material help, but also psychological help. And I think even after the 2010 earthquake, a lot of that was in need as well.