Weeping with those who weep

WORLD Radio - Weeping with those who weep

Residents, organizations and volunteers clear belongings and debris from a line of townhomes destroyed by the Dec. 11 tornadoes on Hillridge Court in Bowling Green, Ky., Wednesday, Dec. 15, 2021. Grace Ramey/Daily News via Associated Press 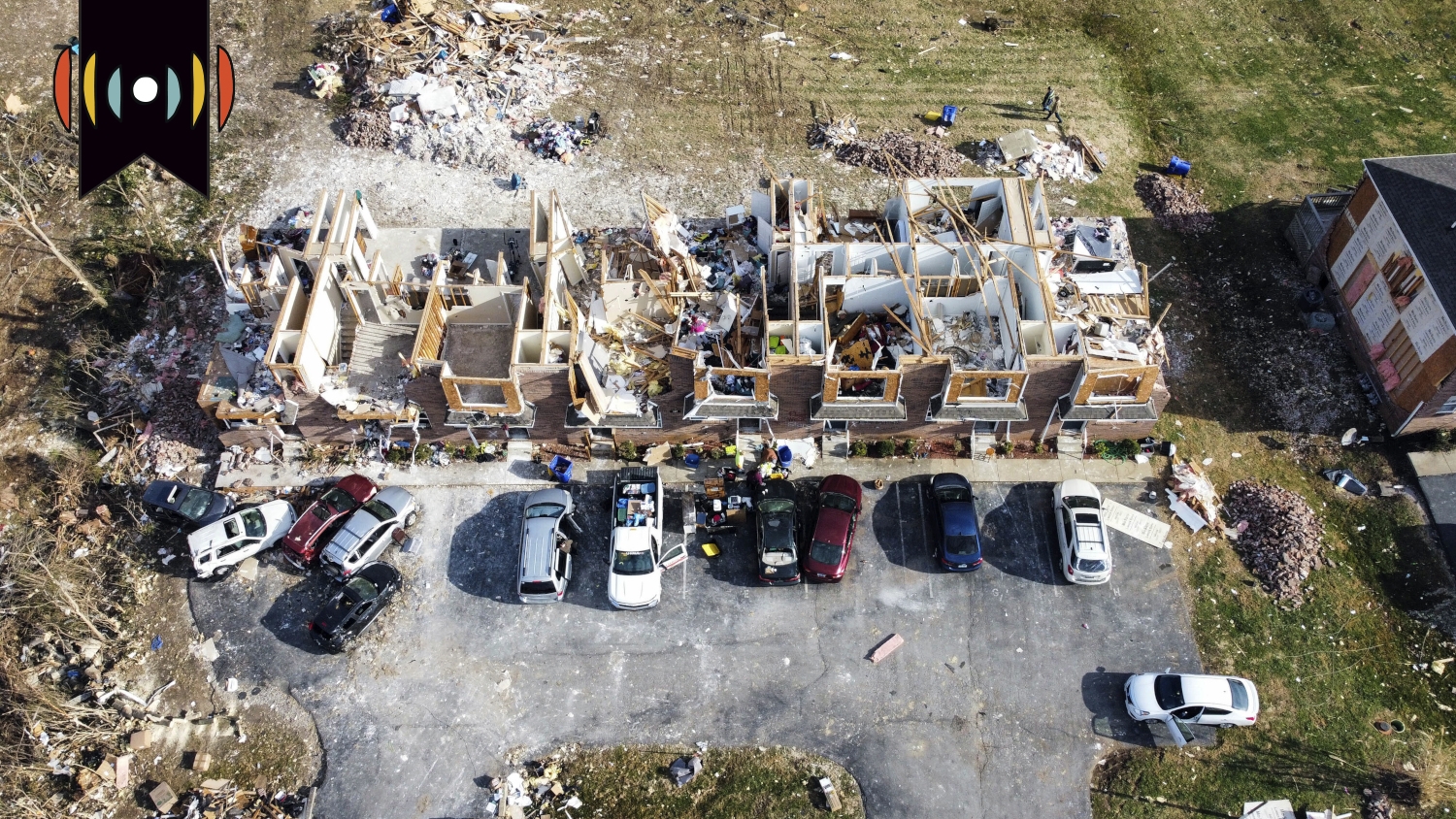 You’re listening to The World and Everything in It and we’re so glad you are! Good morning, I’m Myrna Brown.

Friday’s deadly storm system claimed the lives of at least 88 people in five states—74 of them in Kentucky. The swath of destruction stretched from Arkansas, where a nursing home was destroyed, to Illinois, where an Amazon distribution center suffered heavy damage.

KIM HENDERSON, SENIOR CORRESPONDENT: Patti Sawyer and her husband own one of the few homes left standing in the Whispering Hills Subdivision in Bowling Green, Kentucky. She lived through harrowing moments as the tornado passed through early Saturday morning, and now she’s living through some tough moments in the aftermath.

Like when bulldozers arrived to deal with all the debris.

Still, Sawyer—who now has no vehicles without damage or electricity to even charge her phone—sees some good coming from what Kentucky’s governor has called the most devastating tornado event in the state’s history. She’s seen the value of relationships she built in a church plant and two other congregations.

SAWYER: You sort of think about these friendships and how maybe they've just gone away, or have you lost some of these friends, because everybody is so busy. And then that day, there were everyone from or someone from one of these three churches in my backyard, and they were helping us remove debris, and they were there and you realize that no one was too busy anymore...

Ten miles outside of hard hit Mayfield, Kentucky, families in Wingo are taking shelter in a community center called “The Way.” John 14:6 is posted on a sign above the door.

VASQUEZ: They've been really helpful. Clothing us, feeding us, being able to take showers and you know what I mean, stuff like that. Helping us a lot with the baby diapers. We lost all of that stuff: diapers, formula and all that stuff.

That’s Anthony Vasquez. He lost a lot in the tornado, including Christmas gifts.

VASQUEZ: We had quite a bit of presents for our little son, Michael. Christmas time, you want to be able to be at home, enjoy the family, the holidays and get Christmas lights up and all that good stuff. But I'm just so grateful that I'll be able to have my son for Christmas, you know what I mean?

Samaritan’s Purse has three staging areas set up in the tornado disaster zone. Clay Steelman is overseeing the work in Truman, Arkansas, just south of Jonesboro. There, trees are down, roofs are missing, and homes have been knocked from their foundations. Samaritan’s volunteers have come to work and to give Christian comfort.

STEELMAN: It's a ministry of presence. You can use platitudes and those type things, but a lot of it comes from just standing beside them. And then jumping in and helping them.

By Sunday a volunteer team from The Rock Church in Jonesboro had joined Steelman. They were working with a woman whose home had slammed into a house next door.

STEELMAN: She had a mahogany door that I believe her husband gave to her when they got in that home. So a couple of volunteers made it their task to pull it out from underneath the rubble. So they spent an hour or so digging that out and got out some mattresses and a chest of drawers and some keepsakes for her that she wouldn't have been able to get out otherwise. So that’s how you comfort them.

Steelman says volunteer work is especially challenging when the season is supposed to be merry, but instead it’s mournful.

Red Cross Spokesperson Annette Rowland agrees. She told workers to expect to be away from home for the holidays.

ROWLAND: That just goes to show the compassion that our volunteers have. They didn't give it a second thought, and they were willing to go help.

Rowland says the Red Cross has 13 shelters in affected areas. The organization has also distributed more than 200 blood products to hospitals there. Shortages affect not only the storm’s trauma patients, but cancer patients and sickle cell patients.

ROWLAND: So making sure that that supply is not interrupted is one way that the American people can really help right now.

MUSIC: Jesus, There's Something About That Name

But in the midst of all the rubble and sadness, last weekend music rang out from a house destroyed by Kentucky twisters. Jordan Baize sat at his piano in his roofless home and played the Gaither song, “Jesus, There’s Something About That Name.” He told reporters from ABC News why he could do that.

BAIZE: At the risk of being too preachy, I would say that for me my faith guides me through the good days and the bad days. I would hate to know that I would have to face this storm or any forthcoming without being able to walk through it with Christ. He is the anchor of our lives.