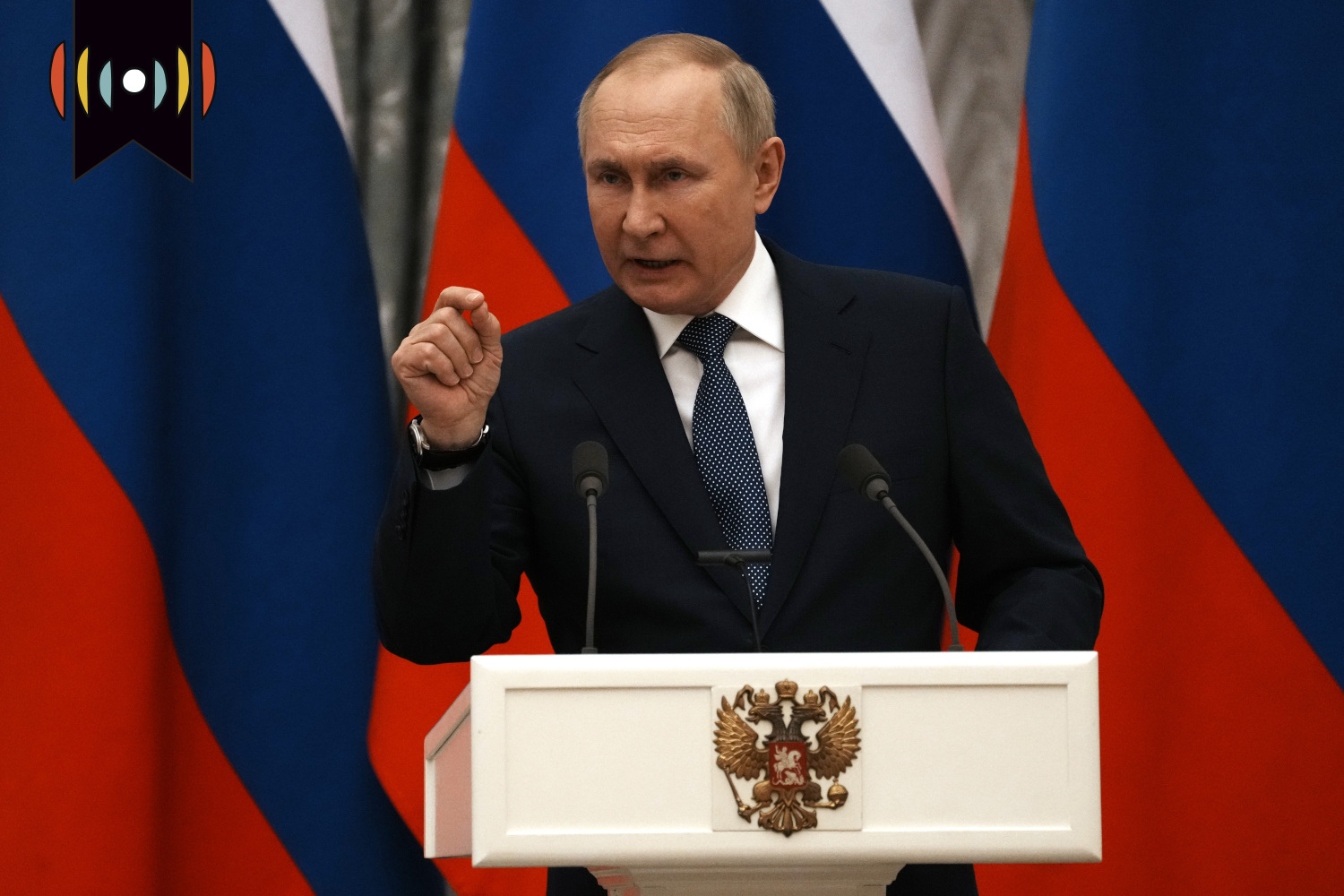 NICK EICHER, HOST: And I’m Nick Eicher. Up first: the crisis in Ukraine.

Well over 100,000 Russian troops and many other military assets remain parked along Ukraine’s border. And the White House has warned that an invasion could come “any day now.”

The Biden administration and Congress are vowing stiff economic consequences for Russia should that nation invade its neighbor again. Of course, Russia already annexed the Crimean Peninsula from Ukraine in 2014.

At the time, the West cried foul over that invasion but did little else about it. The United States and its allies vow that this time things will be different.

REICHARD: Joining us now to talk about how Washington is handling this crisis is Bradley Bowman. He is a senior director at the Foundation for Defense of Democracies. He has served as a top national security advisor to members and committees of the U.S. Senate. Bradley, good morning!

REICHARD: Well, just for context, let’s go back to 2014 when as we said Russia annexed Crimea. At the time the Obama administration policy you remember was “reset.” Resetting relations with Russia.

Take us back to that time. How do you evaluate how the United States handled that invasion?

BOWMAN: Sure, absolutely. I was actually serving as a national security adviser to a member of the Senate Armed Services Committee at the time and so I had a second row seat, if you will, to those developments. And, you know, the bottom line is that the Obama administration, I think, was suffering from what general retired HR McMaster called strategic narcissism. It's this idea where when we see something bad in the world, we Americans tend to really suffer from this malady sometimes, we tend to think everything's our fault, or everything is a reaction to us. And with that perspective, we kind of deprive others of agency. It's like everything must be—if something bad happens—that must be because of us. And sometimes, you know, there's just authoritarian thugs that want to seize territory. And sometimes, as we learned on September 11, 2001, there's just terrorists who want to kill us. And so the question is, how should we respond? And so based on that misleading provocation premise, the Obama administration refused to provide Ukraine weapons to defend itself. And in fact, I remember when the head of state from Ukraine came to Capitol Hill and addressed a joint session of Congress and said something to the effect of thanks for the blankets, but I can't defend my country with blankets. I actually need weapons to do that. And so we now fast forward, we have the Biden administration, which saw indications and warnings for a potential invasion coming as early as October or November, and was really quite slow in responding. I'm glad to see that we've now had up to eight shipments of weapons—American weapons—go into Ukraine, but those were very belated, unfortunately. And I think they're still a bit insufficient.

REICHARD: So that’s a bit of historical context brought current. Well, we know President Biden has asked Qatar to help with the leverage that Russia has over Europe in terms of Europe’s dependence on Russian energy. But it looks like that may not be very effective, so what else might the United States do?

BOWMAN: You know, I think Germany has inflicted a lot of this on itself, a self-inflicted wound, I would say, with what they've done with some of their fossil fuels and nuclear power. And they've been building of course, as some of your listeners may know, the Nord Stream 2 pipeline. This is a natural gas pipeline that runs directly from Russia to Germany and bypasses Ukraine. And in bypassing Ukraine deprives Ukraine of much needed revenue. And gives Ukraine less leverage over what Russia does. And so, you know, this pipeline is almost complete, has not been put into operation yet. And with the German leader’s recent visit to Washington, you know, this was a key topic. And that is, you know, if Russia goes ahead with additional aggression against Ukraine, will Germany work with us and others, to not put that pipeline into operation? And so, you know, I think the Biden administration has been right to say, hey, Putin, if you move ahead, you're gonna suffer from multilateral sanctions, the likes of which we haven't seen. We're going to be forced to beef up U.S. military posture in Eastern Europe, which we've already started to do. And we’ll be forced to provide additional weapons to Ukraine. Those are all good warnings. But I do worry, as I suggested earlier, that those after-the-fact threats or warnings may not be enough to deter aggression from Putin. And that's why I'm focusing on what we should be doing right now.

REICHARD: Congress has been working on a sanctions package against Russia, should Putin give the order to invade. But there are reportedly two sticking points. As you mention, the Nord Stream 2 pipeline and when the sanctions would actually kick in.

What kind of sanctions do you think Washington will ultimately impose and what impact would it have on Russia?

BOWMAN: Yeah, well, there's kind of two different bins or categories, if you will, of sanctions. I mean, one bin is basically punishment to Vladimir Putin in response to a new invasion of Ukraine. And so those would be hopefully multilateral. Hopefully most all of our European allies would join us in those. They would be, you know, the Biden administration has said they would be some of the toughest sanctions we've ever seen. And some of them might go after Vladimir Putin himself, which is somewhat unusual in terms of going after a head of state, would certainly go after his inner circle. And you know, a lot of Russian oligarchs and a lot of advisors, they enjoy vacationing in Europe, they enjoy sending their kids to school in Europe, they perhaps invest some of their money in Europe. So those are all things that could be targeted.

But you know, more broadly, given the size and power, frankly, of the American economy, when Washington applies sanctions, that has a far reaching effect. And so those would put a hurt, no doubt, on Vladimir Putin. But, you know, I think to understand how those would affect his thinking, you have to appreciate how determined he is to write a try to reconstitute as much as possible of the former Soviet Union. And he views Ukraine as a key part of that. So we can put pain on him economically, but whether that's enough to deter him from what’s something I think he sees almost as a historical mission, with an eye on history, and an eye on his reputation as a neo-czar, if you will, I don't know if that will be enough. And then on Nord Stream 2, those would affect German companies working on the pipeline, as well as Russia and Gazprom, and others. But that's where it gets tricky, right? Because Germany is a NATO ally. And imposing sanctions on a German ally is something you want to avoid, because we want to be unified as an alliance. But if they're doing something that's so detrimental to Ukraine and to European and American security interests, Berlin may leave us little choice.

REICHARD: If Russia does invade, Bradley, what do you think is likely to happen next? Will Putin try to absorb Ukraine completely or is he more likely to try to install a puppet government that he can claim retains a measure of independence?

BOWMAN: Yeah, it's a great question. I mean, just as a quick reminder that we've seen this movie before, right? We saw Russia invade Georgia in 2008. Russia continues to occupy parts of Georgia, South ossession of Kazuya. We saw them legally invade and annex Crimea in 2014. And this is the part that a lot of listeners may not be tracking, since then, the Russians have backed a separatist movement in eastern Ukraine in the Donbass and roughly 14,000 people have died as a result. So, you know, when Putin goes, “What? Me? I'm not up to anything.” It's like, well, we're not making this up. We've seen a propensity here for Russia to ignore international borders, and invade and occupy its neighbors. But your question is very good, because it could take different forms, right? I have no doubt that Vladimir Putin would like to accomplish his political objectives at the bargaining table. And those key objectives are commitments that Ukraine would never be able to join NATO, and commitments regarding military units and weapons in Eastern Europe near Russia. He would like to get those concessions made at the negotiating table. If he can't, then, you know, he may go back to his KGB colonel playbook and revert to poisonings, assassinations, and coup attempts. And if that doesn't work, he might take in an invasion. And even the invasion could take several different forms.

REICHARD: Could you elaborate on the big picture here. What are some things people should be thinking about in this situation?

BOWMAN: Yeah, absolutely. I think it's a clash of two worldviews. It's a clash of a worldview held by Vladimir Putin. It’s a might makes right model. Might makes right authoritarianism where Putin says, “Hey, Ukraine, I'm more powerful than you. I can tell you what to do. I can tell you with whom you can associate and what you can do within your territory.” That's essentially what he's saying.

And then on the opposing side of that as a worldview, a worldview codified in the preamble of the 1949 North Atlantic Treaty, codified in the rule of law and international law and territorial integrity, national sovereignty. And when there's a clash like this. Sometimes thugs like Putin will resort to military power to try to get what he wants at the negotiating table. And that's why I'm recommending what I'm recommending. If we arm Ukraine now with weapons to defend itself, we can shift Putin's cost-benefit analysis and hopefully get him to a point where he understands that he can't accomplish his political objectives Ukraine with military force, pushing him back to the negotiating table and hopefully avoiding war in the first place.

REICHARD: Always good to get the big picture. Bradley Bowman with the Foundation for Defense of Democracies has been our guest today. He’s a former U.S. Army officer and Black Hawk helicopter pilot. Bradley, thanks so much!