Washington Wednesday - What’s next for Afghanistan?

U.S. troops may be gone, but Kabul will still loom large for Washington

resident Joe Biden speaks about the end of the war in Afghanistan from the State Dining Room of the White House, Tuesday, Aug. 31, 2021, in Washington Evan Vucci/Associated Press Photo 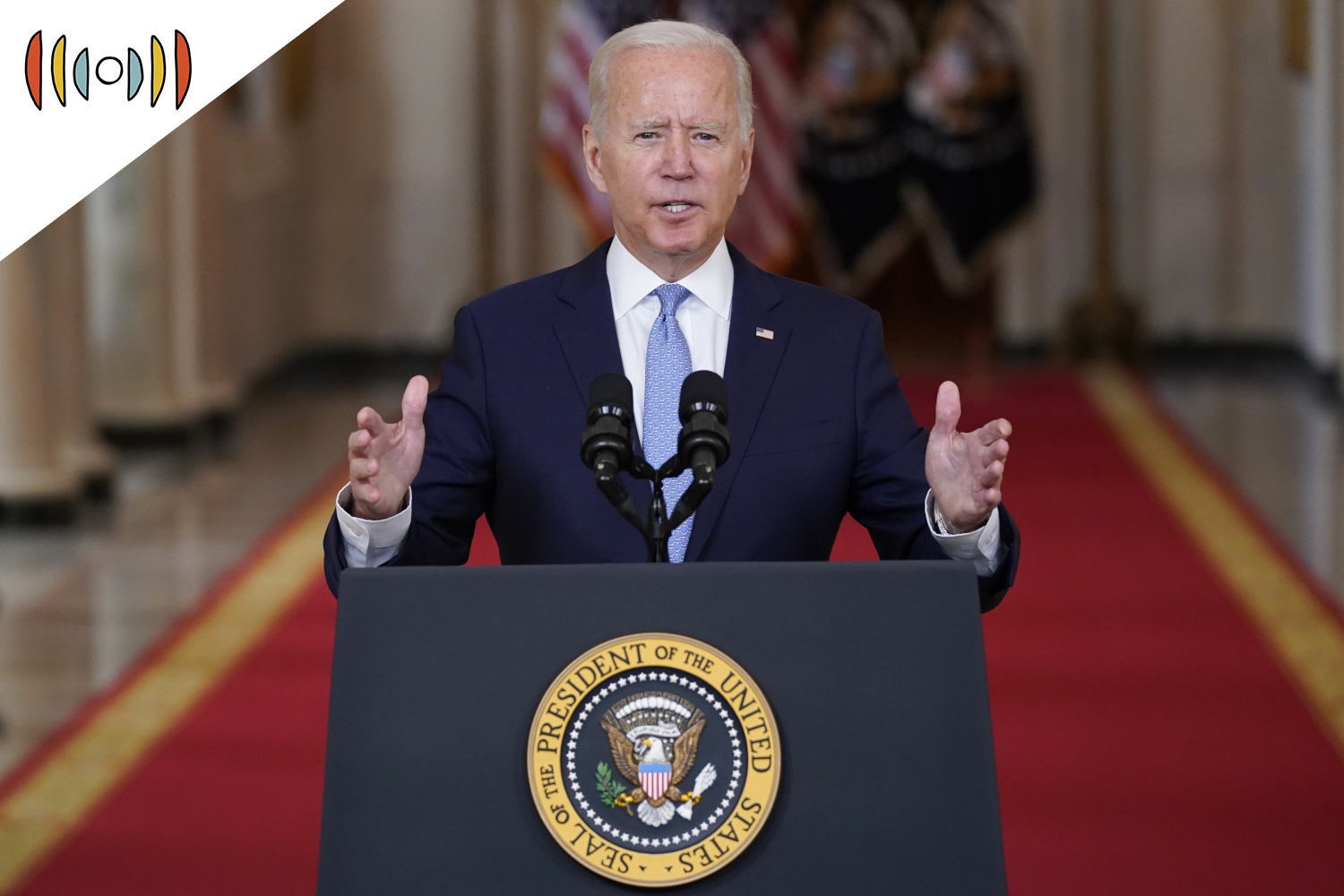 NICK EICHER, HOST: And I’m Nick Eicher. First up: What’s next for Afghanistan and the United States?

As we reported a short time ago, Republicans on Capitol Hill are demanding answers. They say the next step should be a thorough investigation. Whether that will happen remains to be seen.

He’s an expert on national security and foreign policy with the Heritage Foundation. He is a retired Lieutenant Colonel in the U.S. Army, and he formerly served on the Homeland Security Advisory Council.

JAMES CARAFANO, GUEST: Good to be with you.

REICHARD: The White House and Pentagon have pulled the plug on the evacuation in Afghanistan. But Biden administration officials say they still have a range of tools to help get American citizens out of that country. What might those tools be, and do you think we’ll be able to evacuate more Americans and potentially more Afghan allies?

CARAFANO: Well, we have very little leverage. Matter of fact, the argument that we do is almost—borders on being a lie. We don't have a lot that the Taliban needs. They don't really need international recognition. They already have other countries that are willing to work with them—Russia, China, Pakistan. They don't really need money per se, because they're the world's biggest drug traffickers in South Asia.

So our leverage is very little. And you can actually see that. So, for example, if you look at the surrounding countries—the stans like Tajikistan and Uzbekistan—they've closed their borders. And we've asked them to keep them open. And they've said, no. Because they're more worried about angering the Taliban than they are about working with us. So we have very little leverage. Most Americans, quite honestly, are on their own. So there's a combination of really kind of private efforts. There are people running around trying to set up ratlines and underground railroads to get people out. It's incredibly difficult. Because right now there's no way to fly out. Most of the borders are closed, probably maybe get out through Iran or Pakistan, but it's very, very dangerous. The Taliban are actually controlling the borders. The Taliban promised to reopen the airport. Of course, there won't be commercial flights, but governments might be able to send military or charter flights in. But the question is, would people trust the Taliban to go to the airport and let them in? The Taliban say they will, but I don't know. I have half the people tell me the Taliban are going door to door telling people don't worry, everything's going to be fine. And the other half are saying the Taliban are going door to door and they're hunting people down and they're going to kill them.

REICHARD: President Biden on Tuesday once again stood by his decision to withdraw American troops when he did. The defense by the White House seems to be that the withdrawal was destined to be messy whenever the United States eventually pulled out, regardless of the timing. What do you say to that?

CARAFANO: Well, that's a lie. So here's the plan: Their plan was, they were going to give the country to the Taliban, and they had thought they would broker talks between Ghani and the Taliban to turn the country over. And that we would walk out the door. And after we left, the Taliban roll in. And whatever happened, Biden could say, Well, it didn't happen on my watch. It's not my fault. Ghani got cold feet and bolted. The United States essentially had a no-plan plan. Because the idea is if we told people we were leaving, that we’d have to defend all those decisions. So we didn't coordinate with allies. We didn't register people for visas. We didn't have the forces in place to safely evacuate. So, we thought we'd just walk away. And then the Taliban would wait until we were gone. Well, because there was no deal with Ghani and the people just started cutting deals with the Taliban, they collapsed. They rolled into the country. And so we wound up in a situation where we were leaving, and we were completely at the mercy of the Taliban to get people out. And we had a completely inadequate plan to actually evacuate people. So the reality is this is 100 percent the president's decision. And the chaos was caused by how the president decided to leave Afghanistan.

REICHARD: Colonel, the better part of a hundred retired generals and other officers just penned a letter calling on Defense Secretary Lloyd Austin and Joint Chiefs of Staff Chairman, Gen. Mark Milley, to resign for—quote—“negligence in performing their duties” with regard to the Afghanistan withdrawal. What is your take on that? Do you think they were just following orders from the commander in chief, or do you think they bear responsibility for this as well?

CARAFANO: Well, I do think they bear some responsibility. But this is fundamentally Biden's decision—how he decided to withdraw, not having the forces in country to do that responsibly, not having a plan to support the Afghan military, not having a workable political transition, those are all the president's decision. And the military were left with the consequences of that. So for example, the president would not allow them to send any additional forces, therefore, they didn't have—there's only two airfields—Bagram airfield and the commercial airfield. And then there's the embassy. They didn't have sufficient forces to safeguard all three. The president would not let them put more forces in there to do that. So they had to make a choice so that essentially just wound up defending an Airfield—put them completely at the mercy of the Taliban. And then we even still had to bring in more forces to do that.

Having said that, I do think that they bear some responsibility. This is why I have called for a 9/11 style commission. This administration says they did everything exactly right. Well, if that's true, then they should be the first people to stand up and say, yes, let's have a nonpartisan investigation and look at this. And it's important. It's not just important for, you know, politics and playing a blame game. We need to understand what happened, where we are, what's the threat going forward, and what to do about it. If you remember back, we had a 9/11 commission that was under a Republican president, who had 9/11 happen on their watch, and a Republican-controlled Congress. And they were happy to have an independent commission because they said we need to be transparent about what we're doing. And we need to know what's going on so we can make decisions on the way forward. And people remember after the 9/11 commission, we made a lot of changes. Matter of fact, Speaker Pelosi actually introduced a bill to implement the findings of the 9/11 commission.

So commissions are completely appropriate when dramatic things like this happen. They are assessments not for assigning political blame. They're helping us to understand what happened and why, providing transparency and governance, and starting on the right way forward. And I think that would be an incredibly positive and constructive step for this administration to take.

REICHARD: Explain, if you would, the Taliban’s relationship to al-Qaida. What are the odds that Afghanistan becomes a haven again for terrorist training and plotting and carries out another attack?

CARAFANO: Well, it is. I mean everybody—including the U.S. government—thinks that Afghanistan is going to become a haven for transnational terrorism. Now there is a group there called ISIS K. It's an offshoot of ISIS—if we remember back from Syria and Iraq—they had 10 organizations all around the world. One of them was in Afghanistan. They're not necessarily the best friends with the Taliban. Right now they're kind of useful idiots. Because on the one hand, the Taliban can turn to the Americans and say, oh, you need us to fight ISIS K. But on the other hand, they're probably happy that ISIS attacked Americans and helped drive us out of the country. The real threat there is something called the Haqqani Network. This is a terrorist criminal group that spans Afghanistan and Pakistan. They intimately cooperate with the Pakistan intelligence services. They were the ones that originally brought Bin Laden to Afghanistan and asked the Taliban to host him. They have very close ties with al Qaeda. The senior al Qaeda leadership's being hosted in Iran. They're probably going to move back into Afghanistan. Both Haqqani and al Qaeda share the goal of a global campaign against the governments in the Middle East and their supporters in the West. That global terrorism is vital for them. The first thing they're going to do is start planning the next 9/11. The Taliban are going to tolerate these people. And then I'm sure they're less fearful that if something happens, anybody is going to come back and try to kick the Taliban out again. So, I think the potential for a renewed global terrorist campaign against the United States is incredibly high. It's not just Afghanistan, where we're absolutely certain there will be a terrorist sanctuary. The fact that the Taliban inflicted a humiliating withdrawal on the United States will be a clarion call to Islamists worldwide to live Bin Laden’s dream that America is a paper tiger, to rise up and strike them and seal a victory the way the Taliban did. So I think we've got to worry about this on multiple fronts.

REICHARD: Final question here colonel: The White House claims they have capabilities now that they didn’t have 20 years ago and have the ability to monitor and counter terrorism threats from “over the horizon.” What’s your response to that?

CARAFANO: I think it's largely a lie. We have no place where anybody is really going to let us base to have real-time operational capabilities in theater. You can send a drone from over the horizon. The best case it will take eight or nine hours to get there. The ability to maintain assets on a rotating basis over the country is incredibly expensive. We've got very few intel assets on the ground. I actually think we have less capability to know what's going on in Afghanistan today after we've withdrawn from the country than we did when Bill Clinton was president in the 1990s, you know, blindly lobbing cruise missiles at al Qaeda where they were planning the next 9/11.

REICHARD: Retired Lieutenant Colonel James Carafano with the Heritage Foundation has been our guest. Colonel, thanks for your insight!

CARAFANO: Thanks for having me.