What does the future look like for Russia’s war with Ukraine? 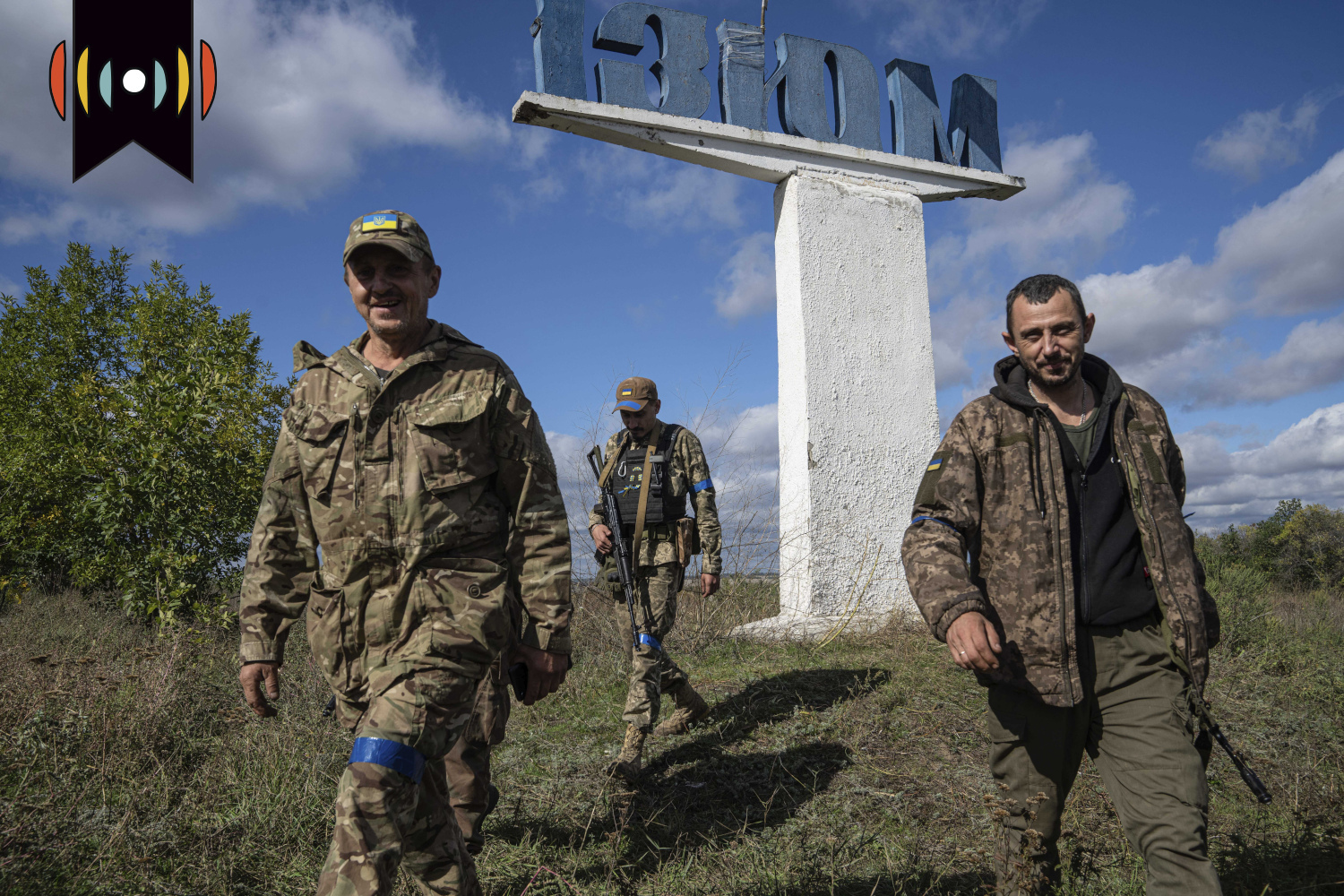 Republicans and Democrats don’t agree on much these days, but they do agree on supporting Ukraine against the Russians.

The United States has contributed roughly $16 billion in military support to Ukraine along with other aid.

And Ukraine’s military has put it to effective use. In a recent counteroffensive Ukrainian forces have recaptured a lot of territory in the country’s east forcing a chaotic Russian retreat in some places.

Here to help us understand Ukraine’s battlefield gains and the role of U.S. support going forward is John Hardie. He’s an expert on Russian foreign and security policy and U.S. policy toward Russia. He’s with the Foundation for Defense of Democracies.

JOHN HARDIE, GUEST: Good morning. Great to be with you.

REICHARD: Well, let’s start with this major counteroffensive. Has the tide turned and how significant are Ukraine’s gains in recent weeks?

HARDIE: Well, they’re certainly significant. Ukraine took back most of Kharkiv Oblast, the territory that was occupied by the Russians. They did it by, essentially, mounting, massing a considerable force near a town called Balakliya and breaking through very thinly defended Russian lines and then pushing up to a key logistics hub in a town called Kup'yans'k, which basically forced the Russians to withdraw all their forces, pushing southward toward Slovyansk. This is one of the last key cities in the Donetsk Oblast. So, they’re very significant gains. I would call this a turning point in the war. There’s a lot of hard fighting left to do but it’s clear that the correlation of forces is trending in Ukraine’s favor, whereas the Russians are suffering with an increasingly severe manpower problem.

REICHARD: Vladimir Putin has been reluctant to call this a war (as opposed to a “special military operation) and fully mobilize conscripts and reserve forces. Is that Putin’s next move? What’ll it mean if he does?

HARDIE: Well, it could be. I mean, we’ve seen just as recently as yesterday, new legislation in the Douma that would impose penalties for basically refusing to go along with that. So, that could be laying the groundwork for some kind of mobilization decision. It could also just be, depending on how the law is applied, it could be trying to address Russia’s current problem with at least thousands of soldiers who are refusing to continue fighting. So, Putin could avail himself of an option to conduct some kind of mobilization. A more practical, immediate-term solution would be to deploy conscripts en masse. Earlier in the war, Russia deployed some small number of conscripts which they were not supposed to do because conscripts were not supposed to fight abroad except in some dire circumstances. And remember, as you just said, this is billed as a special military operation, not a war. So, at this point, Putin could say, “Ok, this is a war. I’m going to deploy conscripts,” which would make available some tens of thousands of conscripts in the ground forces. And then in the coming months, he could conduct some sort of partial mobilization where you call up additional personnel, probably starting with folks in key specialty areas where the Russians might be short. But both of these measures would come with big significant domestic stability risks, because they'd be very unpopular and I suspect Putin knows that, which is why the Kremlin thus far has been emphatic in saying any sort of mobilization is not on the table.

HARDIE: Right, so Putin’s overall goal is to reverse Ukraine’s drift or escape from Russia, Russia's sphere of influence, and Putin wants to reverse that and basically dominate Ukraine. That's his ultimate goal. The way he's gonna do that or try to do that was by overthrowing the government in Kyiv and installing a puppet regime.So that was the initial objective before the war began. He quickly realized that that wasn't going to happen. And he's sort of pared back his military objectives to taking the rest of the Donbass. But again, the ultimate goal I don't think has changed. I think the Intelligence Committee would probably agree with that. So, yeah, in terms of in terms of Putin's initial military goal, that obviously wasn't accomplished. Taking the rest of Donbass, that probably will not be accomplished either. In fact, the Kharkiv Oblast counteroffensive, which was so successful, has probably put the nail in that coffin. The Russian forces that were arrayed, pushing southward towards Slovyansk were really key to that effort and without that prong pushing southward, I don't really see it happening.

REICHARD: In a military sense now, what support from the United States and NATO allies has had the most impact, would you say?

HARDIE: Well, I think it has evolved throughout the war. Early on, we saw things like javelins, stingers played a big role, those are still definitely important. But you know, during the second phase of this operation, when the focus shifted to the east, it was much more artillery-centric. Artillery definitely played an important part in the first phase, but in the second phase, artillery was really the way that Russia was making any gains at all is by just massing really, really enormous rates of artillery fire, and then sort of inching forward. And so the Ukrainians had to be able to withstand and counter that. In the third phase, I think as Ukraine has tried to go on a counter offensive, they've done a couple of things really well with Western support. One is use HIMARS and other long range precision strike capabilities to degrade Russian logistics, command and control, air defenses, other high value targets of that nature. And they've also used Western armored vehicles, etcetera, protected mobility platforms to be able to move around on the battlefield and conduct these counter offenses

REICHARD: Ukraine’s been asking for fighter jets ever since this war started. Is the United States going to supply those or not?

HARDIE: Well, it's a great question. If we did, I think it would be something that wouldn't necessarily impact the war within the coming months. This would probably be a year or longer sort of conversation. And one legitimate concern is even after we train up the pilots, we'd probably have to put American contractors in Ukraine to service the planes. So I understand hesitancy to do that. I think, in general, some of the Biden administration's concerns throughout the war about provoking Russia is probably unfounded and too cautious. But in this case, I understand the concern about risking the lives of Americans. So, we'll see. I think we definitely should continue to explore that option, but there are some legitimate obstacles.

REICHARD: Final question. In your view, what’s the most important thing most people don’t know about what’s happening in Ukraine right now?

HARDIE: Well, I think I'd say one thing I don't know is what Putin is going to do going forward regarding the mobilization question that we discussed. To me that's really the key question, because, Russia, as I mentioned before, is very short on manpower. They're having to spread increasingly thin forces across the battlefield, which results in situations like we just saw in Kharkiv, where they just don't have the forces to defend against Ukrainian counter offenses. Meanwhile, Ukraine is using western military aid to equip additional forces. So, really, the trend there is going in Ukraine's favor. This will be a bigger problem for Russia, as a lot of the personnel that they've signed up on short term contracts as sort of stop-gap solution throughout the war, you know, those contracts will expire. So some of them might want to take the money and run so to speak. So this manpower issue is going to be increasingly salient. And I think Putin is sort of caught between a rock and a hard place of military reality versus domestic political risks. And I, for one, don't know how he's gonna address it all right.

REICHARD: John Hardie is with the Foundation for Defense of Democracies. John, thanks so much for your time!