With Russian casualties mounting in Ukraine, Putin may be forced to rethink his strategy

An armed man stands by the remains of a Russian military vehicle in Bucha, close to the capital Kyiv, Ukraine, Tuesday, March 1, 2022. Serhii Nuzhnenko/Associated Press Photo 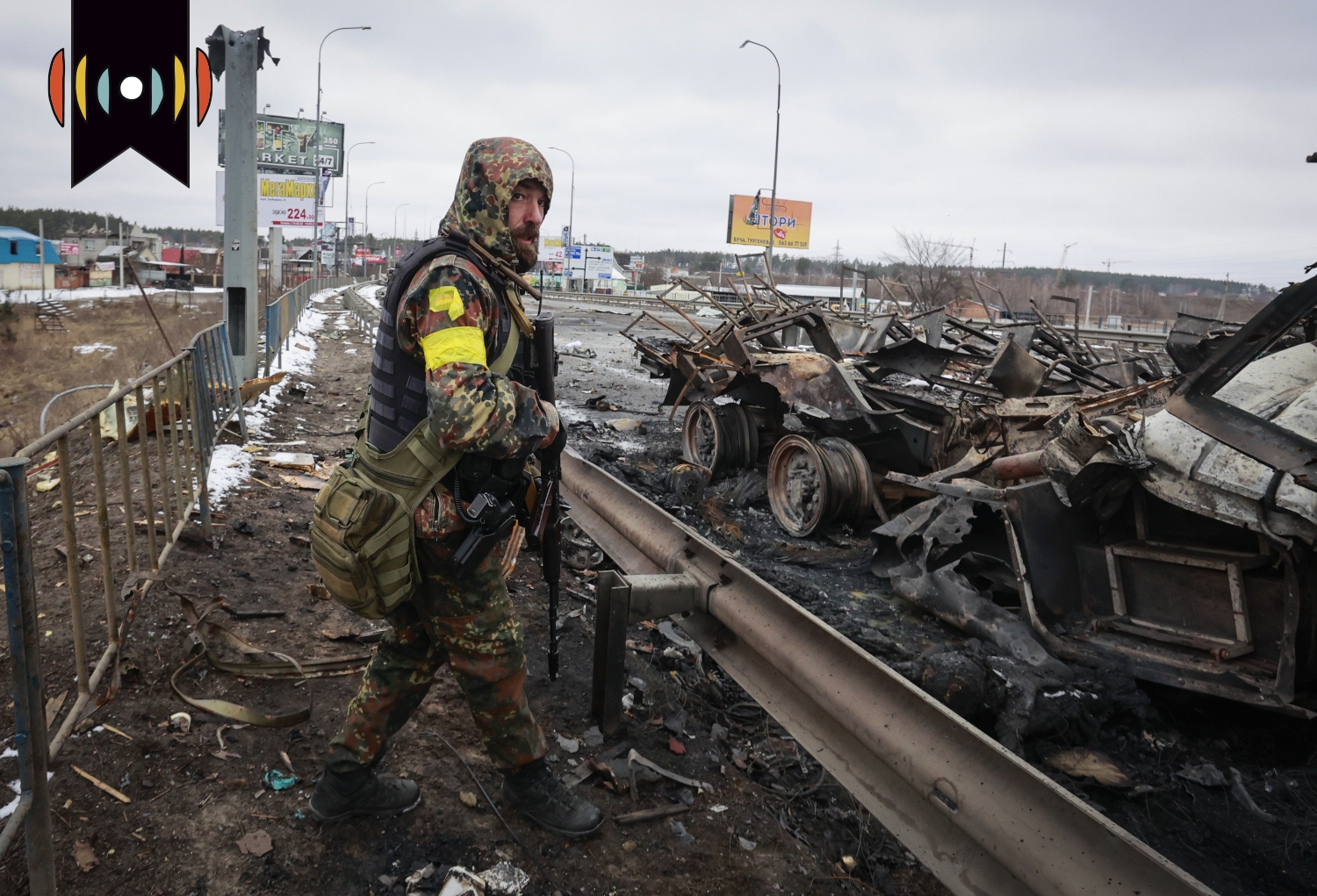 This week, President Biden signed off on $350 million in additional military aid to Ukraine. And billions more could be on the way if Congress gives the green light.

Meantime, as promised, Washington and its allies have hit Russia with tough new sanctions, with more potentially to come. But will it be enough?

Joining us now to help answer those questions and others is James Brooke. He is a Russia-Ukraine fellow at the Foundation for Defense of Democracies.

And he’s a lifelong foreign correspondent who has lived in both Moscow and Kyiv.

REICHAR: James, before we get to Washington’s response, you probably maintain some connections in the places you used to live. Let’s talk first about the Russian people. What are they thinking about this invasion?

BROOKE: The Kremlin controls all the media in Russia. All the networks, all the radio stations, and the print press. There are a couple exceptions on the internet. So, the Russians are fairly apathetic. That said, there are millions of Russians who have relatives in Ukraine. The relationship is very similar to between Canada and the United States. There's a lot of intermarriage. There was a lot of back and forth. A lot of friendliness on the people-level. So, we have heard, there have been 5,000 people detained in anti-war demonstrations in Moscow and St. Petersburg. I have heard reports of a military mutiny of 5,000 soldiers. I don't know if that's entirely true. The Ukrainians have captured Russian soldiers. They seem pretty demoralized. And sometimes they say they didn't know they're going into Ukraine. They thought they were going on exercises. So I think there's a lot of apathy and skepticism. Putin has been running Russia for 22 years and he's done it partly by marginalizing public opinion. Now, that said, so far, 5-to-6,000 Russian soldiers have been killed in five days.This is going to get back. There are going to be funerals. This is a very sensitive point for the Russian government to lose their soldiers, especially in Ukraine, which people see as a friendly country.

REICHARD: And what do your friends and connections back in Ukraine, in Kyiv tell you about what they’re seeing and feeling?

BROOKE: Mary, I left Ukraine in September—partly because I have a six year old son and wanted to get my wife and son out of there, partly because of COVID, and partly because of the Russian military buildup. My neighbors are sleeping in subway stations and running out of food, to be blunt. It's a tough situation. There's a curfew. I think supplies are not getting into the supermarkets. There's been a lot of bombing, rocket attacks on highrise buildings in Ukraine. I lived in a sort of czarist era four-story building. Could be a target, you don’t know. So people have rediscovered bomb shelters, which had been closed up since the end of the Cold War. And probably the safest thing is to take your mattress and go sleep in the subway station.

REICHARD: James, explain to us a little bit about the sanctions that Washington and its allies have put into place and why do they matter?

BROOKE: They're really earthshaking sanctions. They basically turn Russia overnight into a North Korea or an Iran. The simplest thing is this thing called SWIFT, which cuts interbank connections. This means you can't go to Russia and use your Visa card. This means that people can't pay easily for Russian gas or oil. It really isolates Russia. At the same time the EU and the U.S. have basically banned their airspace to any Russian flights. So there'll be no airplanes flying in and out of Russia to the west, essentially. I've been quite surprised. It's very, very tough, very tough sanctions.

REICHARD: Just to clarify, Russia is out of the SWIFT banking system or not?

BROOKE: About 80 to 95 percent yes. Certain parts are still open, but it has been cut out. And this the Europeans did. And the Europeans are often laggards in this. They did not want to drop heavy sanctions on Russia. They depend on Russia for 40% of their gas imports. But I think Russia has scared Europe. The EU is scared of Russia. It’s a 'come to Jesus' moment.

REICHARD: Are the United States and its allies giving Ukraine what it needs right now, militarily?

BROOKE: Well, there's a lot of talk. It's unclear what is getting in. What Ukraine needs are anti-tank, anti-ship, anti-drone, anti-air missiles. And they need these because Putin’s offensive has stalled. There's been such ferocious resistance by the Ukrainian people on the ground that the general fear is that he will resort to carpet bombing Ukrainian cities. He did this in Chechnya. He bombed Grozny. He bombed Chechnya to make it look like Stalingrad of 1944. He bombed Syria. Putin, when he gets blocked and frustrated, he unleashes the carpet bombing, the big bombers. And the fear is that he will do that with Ukraine, bomb them into submission.

REICHARD: What else could the White House and Congress do that they haven’t already done, in your view?

REICHARD: What is Vladimir Putin’s endgame here? Annex part or all of Ukraine?… or still call it Ukraine, but install a puppet government that does whatever Putin says?

BROOKE: Mary, we don't really know what Putin's endgame is. We suspect that he wants to recreate the Russian Empire, which is a little spooky because the Russian Empire was actually larger than the Soviet Union in some areas. He seems to think that anyone who speaks Russian should answer to him. Now the fact that you and I are speaking English does not mean that we answer to Queen Elizabeth II. We have our affinities with England, with Britain, but the fact of speaking English does not mean we are English. Putin thinks that anyone who speaks Russian should be answering and saluting to the Kremlin and so that's why Europe is scared. They feel they've got to stop Putin now in Ukraine before he keeps moving west.

REICHARD: Any about this situation that you think Americans need to understand but don’t?

BROOKE: Americans need to understand that Ukrainians are real fighters. And there's a saying about Ukrainians that they're meek and mild and you can push them, but you can push them just so far. And when their foreheads hit the ground, they come back up as Cossacks. Ukrainian culture was formed by the Cossacks. Who were the Cossacks? They were basically escaped serfs or slaves, essentially. And they formed the culture of Ukraine, which literally means “on the border.” And they're very independent, somewhat chaotic. And they know how to fight. From 1944 to '54, more Soviet security personnel were killed in western Ukraine by the partisans than during the entire decade of the Soviet occupation of Afghanistan. Which, you could connect the dots and conclude that Ukrainians—when their back is up—are more ferocious than the Taliban. We've seen videos from Kyiv of dozens of men and women filling up Molotov cocktails. We've seen the men lining up around the corner to join the territorial defense. Putin has stuck his foot into something very unpleasant. And 5,000 Russian soldiers dead in five days is just the beginning of it.

REICHARD: Alight, James Brooke with the Foundation for Defense of Democracies … James, thanks so much!