Washington Wednesday - The man in the middle

WORLD Radio - Washington Wednesday - The man in the middle

What does Joe Manchin’s centrist stance mean for the Democrats’ agenda going forward? 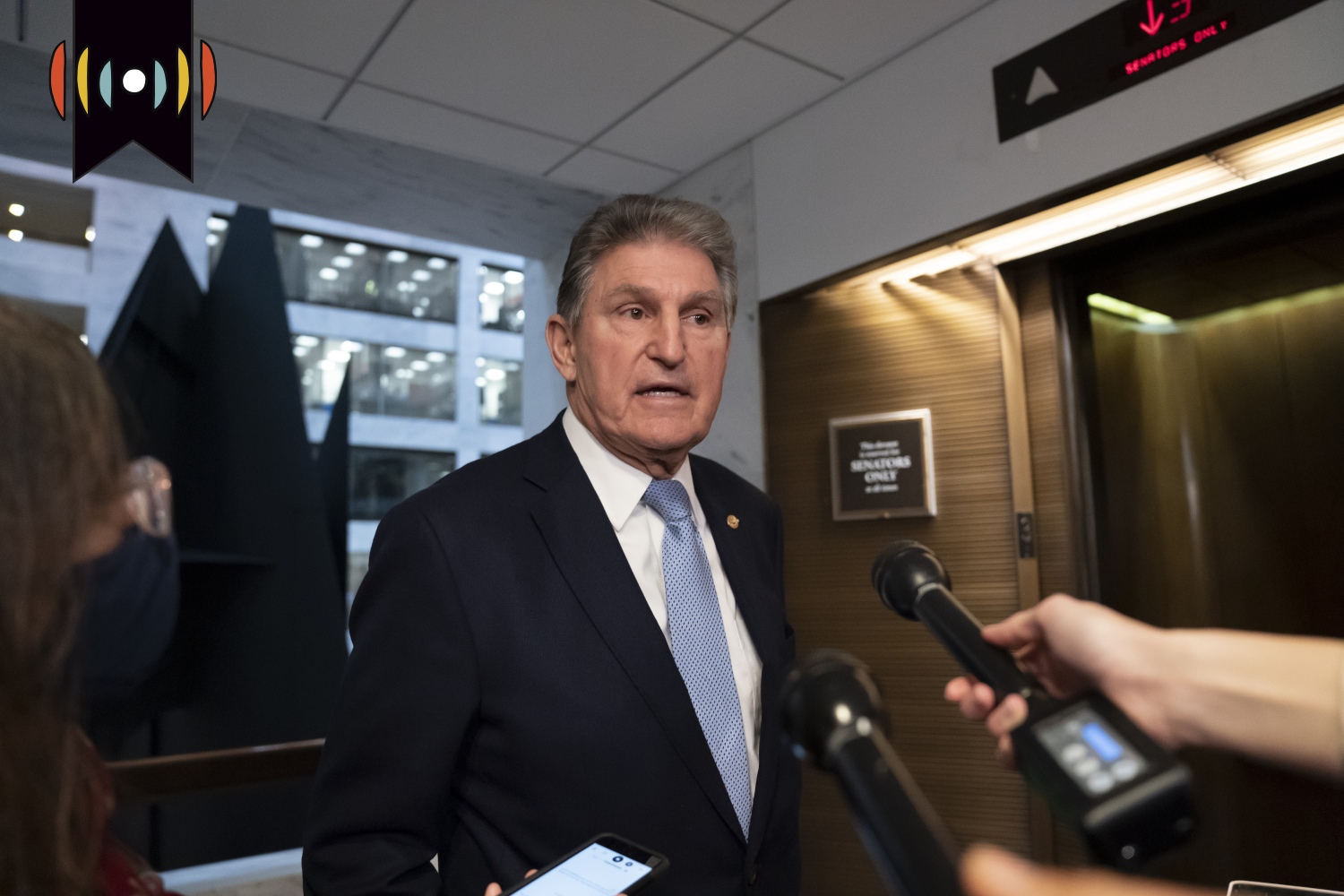 NICK EICHER, HOST: And I’m Nick Eicher. I hope you took special note of the preroll today. The story she tells is of the day August 26th. That day a terrorist bombed the airport in Kabul, Afghanistan, during the chaotic pullout of American forces. One hundred eighty three people died that day and among the dead were 13 members of the United States military. That’s the context.

Her son was there—he was on duty at the airport—and several days before that attack, she sent us a preroll and she happened to mention her Marine son.

In God’s providence, the day we’d planned to use it was the day of the attack.

REICHARD: And the story just gives me goosebumps. Around 9:30 eastern that morning the attack came and WORLD listeners made the connection and prayed for that young man and the family. God preserved the young man’s life and it was just one of those moments—and that’s what Lisa was describing—where you really feel connected to the prayers of God’s people.

EICHER: That’s something we hear, that our news and features prompt prayer for situations around the world, and her story is just a vivid reminder of the kind of community we have here at WORLD, and we’re just so grateful for the opportunity to be a part of it and grateful to God for you for sharing your weekday mornings with us.

So if you skipped through it or it didn’t really sink in for you, I’d recommend you go back and hear her voice, listen to that preroll one more time.

REICHARD: Now on to Washington Wednesday.

West Virginia Sen. Joe Manchin is a rare breed, at least in the U.S. Senate, a traditional centrist Democrat.

EICHER: With the Senate now split 50-50, party leaders have to have every Senate Democrat on board to pass any legislation unless Republicans join them. And that included President Biden’s “Build Back Better” plan. The multi-trillion-dollar social spending package was the cornerstone of his domestic agenda and the White House worked for months to sell Manchin on the plan.

But on Sunday, the senator announced, no sale.

MANCHIN: I cannot vote to continue with this piece of legislation. I just can’t. I’ve tried everything humanly possible. I can’t get there.

But Manchin is also standing in the way of other things progressive Democrats would like to accomplish and he’s drawing plenty of fire from the left because of it.

REICHARD: Joining us now to talk about Republican prospects for next year and beyond is Matt Klink. He is a Republican political strategist. Matt, good morning!

REICHARD: So why did Senator Manchin oppose this bill....after all, he supported other big spending throughout this pandemic?

KLINK: Joe Manchin has been very clear that he was opposed to Build Back Better as it was currently being considered in the Senate for a couple different reasons. The first is the impact that even more government spending would have on inflation. We're already seeing rising gasoline prices, rising food prices, and the impact that that inflation is having not only on West Virginia voters, but more importantly, on the United States at large was one reason. The second reason that he said all along was that he was just tired of the budget gimmicks. The Democrats—to fit the Build Back Better program under the rules of reconciliation—they would create 10 year programs, but fund them for one year, which, again, that made the bill come in at about $1.75 trillion. But the Congressional Budget Office did our real world estimate if these programs were to continue, and it came in somewhere between $3 and $4 trillion and that was just too much for Mr. Manchin to stomach.

KLINK: Aside from the financials, the thing that probably would have won Senator Manchin over is fewer programs with real funding allocations—meaning for a 10 year life of program, which is the maximum that you can do under budget reconciliation. But then again, that would divide the progressive caucus and Joe Biden has consistently shown weakness, and rather than forcing progressives to choose priorities, he's just given them everything. So, Senator Manchin really is going to force the Biden administration and the Senate to take a step back and focus on what's really important. And if they're not careful they may get nothing.

REICHARD: Democrats are now turning up pressure on Manchin to support a federal overhaul of election laws. And that would shift a whole lot of power from states to Washington. Where does he stand on that issue?

KLINK: He's been rather mum on, you know, he said he supports some things but he hasn't said he supports the specific package that is HR-1 or S-1, which would be a complete overhaul of voting. And the obstacle that the Democrats face in the Senate is that they need 60 votes unless they tinker with the filibuster. And Joe Manchin and Kyrsten Sinema and others who have not been so public have concerns about that because everyone in the Senate realizes that they may be in the majority today, but they could be in the majority tomorrow and this could be used against them.

REICHARD: Speaking about the Senate filibuster. GOP Sen. John Thune said Manchin is—quoting here—“trying to come up with some fairly … creative ideas about the rules.”

Do you have any idea what that means or what changes Manchin might favor?

KLINK: Well, look, the Senate writes its own rules. They can pretty much do whatever you have 50 votes for. The challenge, though, becomes that those rules can be easily misinterpreted. And that the classic example is when Senator Harry Reid removed the filibuster on judges with the exception of Supreme Court judges. Well, the Republicans came in and said, If we're going to do it for judges, we'll just remove it for all. Boom presto, we now have three Trump appointees on the Supreme Court and a 6-3 majority vote. So it's the law of unintended consequences in the Senate and that's why the smart and centrist Republicans and Democrats are treading very, very lightly on filibuster reform.

REICHARD: Well, we know that Manchin isn’t very popular with the liberal base of the Democratic party right now. He’s taking a lot of abuse. Is that a problem for him?

KLINK: Joe Manchin is being abused by the progressives. But you know what? He represents a state that Donald Trump won by 39 points. Build Back Better is polling negatively by 75 percent of West Virginia voters. So I don't think he has anything to worry about about voter displeasure with his actions. In fact, I think that the voters are happier with Joe Manchin primarily because he did stand up for West Virginia and didn't bow to the coastal elites.

REICHARD: Well, there’s a lot of focus right now on instances where Manchin is standing in the way of progressive efforts, but there are plenty of issues on which he is very much aligned with the Democrats, right?

KLINK: Absolutely. Joe Manchin is no Republican. He supports increasing corporate individual and capital gains taxes—although not as dramatically as progressives—he supports letting Medicare negotiate for prescription drug prices. So again, he is a centrist Democrat, who believes that there is a role for government to play, just not as excessive or as aggressive as the progressives in the Democratic Party want.

REICHARD: Matt, do you expect some Democrats to almost run against Manchin in a sense in next year’s midterms to motivate their base? And do you think they may hold up Manchin’s obstruction of the left’s priorities to tell voters… “hey, we need a bigger Senate majority!”?

KLINK: The progressive left will absolutely use a stalled agenda to highlight why more progressives are needed in Washington D.C. The challenge, though, is that especially in the Senate, unless you're running in a deep, deep blue state, the middle holds sway. So you know, voters want moderation. Voters did not elect Joe Biden to be a “transformative president.” They elected him because he was the anti-Trump. He was competent, he had worked in Washington, he was going to end COVID, and restore America's prominence in the world. And frankly, none of that's happened so far. The Democrats have a really, really tough road to hoe in 2022. And believe it or not, Joe Manchin may have saved the Democratic Party from its own self. That the progressive impulse to tax command and control was so burdensome that they're losing the middle. And elections in this country are not won on the extremes, they are one in the middle. And right now that middle has swung pretty significantly back toward Republicans.

REICHARD: Anything else that you would want to add? I’ll just have an open-ended question here about this whole topic with Joe Manchin, the Democrats, and where the GOP stands in the next election?

KLINK: Joe Manchin is the most powerful person in Washington D.C., bar none. Every piece of legislation—whether it's a voting rights bill, a spending bill, an energy bill—they all run through Joe Manchin and look for a thumbs up or a thumbs down. There are other Democrats that also hold power. Kyrsten Sinema, for one. But Joe Manchin is consistent in his desire to keep the party left of center but certainly touching center and it makes for a lot of fun for Joe Manchin and probably a lot of angst from the coastal elites like California, New York, and Massachusetts.

REICHARD: Matt Klink with Klink Campaigns has been our guest today. Matt, thanks so much!