Top generals say they warned the president what would happen in Afghanistan if all U.S. troops left the country

Chairman of the Joint Chiefs of Staff Gen. Mark Milley listens to a Senator's question during a Senate Armed Services Committee hearing on the conclusion of military operations in Afghanistan and plans for future counterterrorism operations, Tuesday, Sept. 28, 2021, on Capitol Hill in Washington. Patrick Semansky/Associated Press Photo 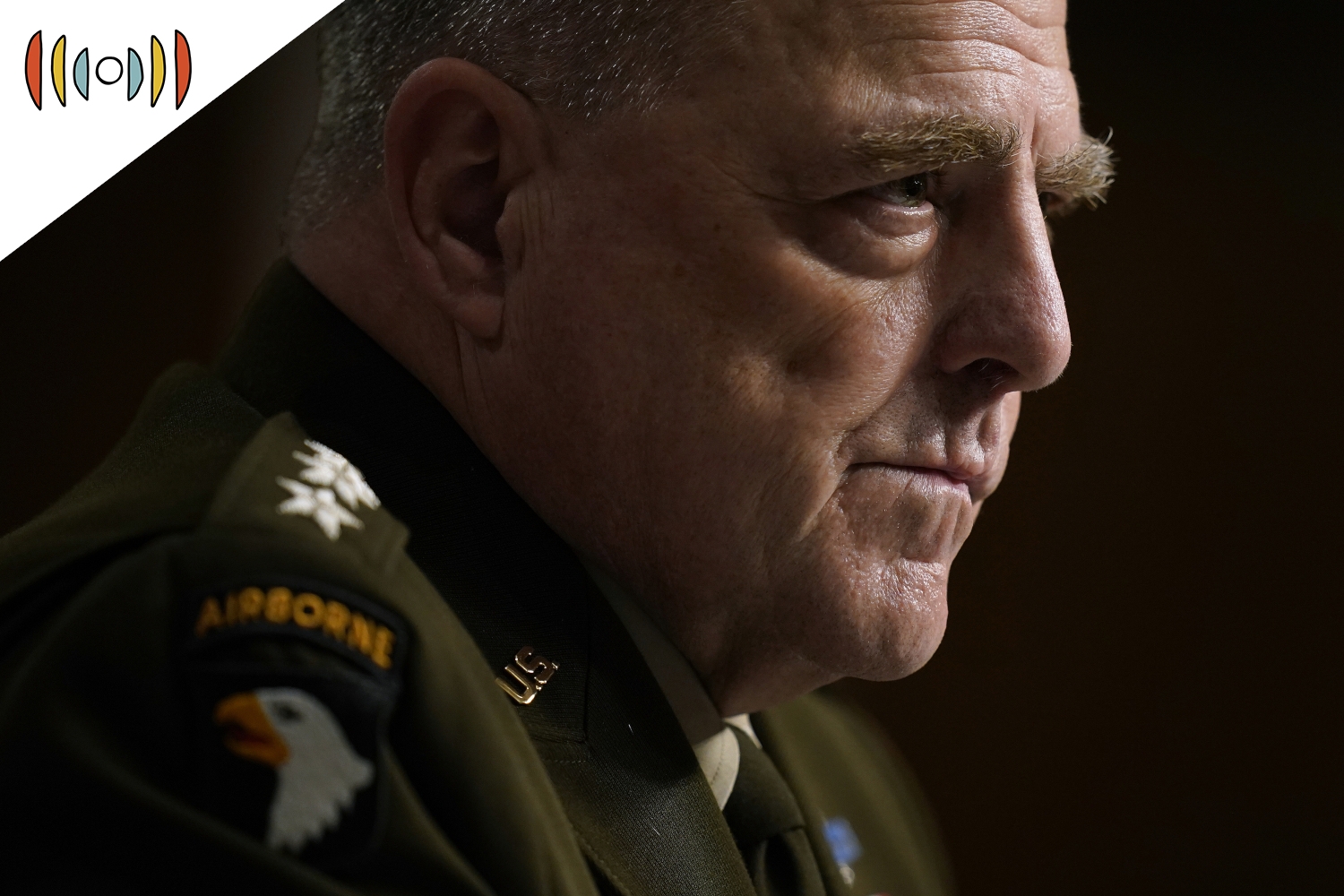 As you just heard, U.S. military leaders appeared before the Senate on Tuesday to answer questions about the disastrous end to the war in Afghanistan. Gen. Mark Milley, the chairman of the Joint Chiefs of Staff, minced no words. He offered a devastating assessment of America’s longest-running war, calling the outcome of it a “strategic failure.”

REICHARD: Joining us now to provide more insight is James Carafano. He is a retired Lt. Col. in the U.S. Army who formerly served on the Homeland Security Advisory Council. He is now an expert on national security and foreign policy with The Heritage Foundation.

Colonel, good morning and welcome back to the program!

JAMES CARAFANO, GUEST: Thanks for having me.

REICHARD: Colonel, let’s just start with this question: Anything surprise you from Tuesday’s testimony?

CARAFANO: No, I don't think so. As a matter of fact, I don't think we really heard any factual information that we hadn't heard before. What's most noticeable to me about the testimony is what we didn't hear, which is they would not go into the specifics of what advice they had given to the president, and what decisions the president made based on their advice, which really is the crucial question about why did things unfold the way they did?

REICHARD: Did we learn anything new about the thought process behind the withdrawal and why it was done that particular way?

CARAFANO: No, I don't really think we did. I mean, to me, you know, it's just kind of like the Kabuki dance. I mean, I don’t know how many people follow ancient Japanese culture, but, you know, the stylized performance and we all know how it ends before it starts. So everybody kind of played the role. Republicans run offense, Democrats are on defense. They were critical of Afghanistan, but they were really about trying to share and spread the blame across everybody from the Trump administration to I think Adam and Eve. And the military and the secretary were kind of like goalies, you know, they were kind of dodging slap shots and trying to pass the buck. So they were happy to explain what happened, but they really weren't happy to go into an explanation of why. So I don't really think these kinds of hearings can really ever produce the kind of information that Americans want, which is the transparency of how are decisions made? How did that impact what actually happened? Where are we today? And where do we need to go forward? So I think those questions were largely unanswered.

REICHARD: General Milley said the joint chiefs of staff unanimously advised the president to end military operations and complete the evacuation at the time that they did. Why do you think that was the case?

CARAFANO: Well, you know, this kind of comes without all kinds of caveats: Under what conditions? Under what alternatives? I mean, what's never been adequately explained is we had 2,500 troops who were not taking casualties, who we were spending less in a year than we used to spend in a week. Matter of fact, the cost of the withdrawal was magnitudes times greater than the cost of just staying there. And it was a turn to the Taliban. Why that wasn't sufficient. We have the president's repeated claims that it was not sufficient. We actually have statements from the chairman in the joint and other members of the Joint Chiefs that they've recommended that we retain the 2,500 person commitment. We've never squared that circle. And so statements like that, they sound complete on their face, but they're completely lacking of all the context we need to really understand about why decisions were made, when they were made, and what the consequences of them were.

REICHARD: Generals Milley and McKenzie testified that they recommended leaving those 2,500 troops in Afghanistan, but President Biden has claimed no one ever said that to him. What was your reaction to their testimony?

CARAFANO: Well, these are so many dots that just don't connect. Well, we recommended the withdrawal. But we recommended the troops stay.  Well, we the recommended the withdrawal, but the president says nobody ever made that recommendation to me. So, the reality is these dots just don't connect up. And to connect them, you have to say what advice did you give to the president when and how did he react to that? And they're not going to do that. We understand this is one of the natural tensions of civil-military relations. On the one hand, you want close and confidential conversations so you can be frank and open. On the other hand, the members of the Joint Staff and the secretary of Defense are also accountable to the Congress. And so the Congress can do its role, its oversight. So how do you do both of these? And the answer is it's very, very difficult. And so oftentimes, what they did is they've left it to the people to connect the dots. In other words, they say statements which are actually not reconcilable, and they leave it to others to kind of understand the implicit things that we told the president, he just didn't listen to us. But they won’t say that in public.

REICHARD: Well, that sounds like a big mess. What are we supposed to do with that?

CARAFANO: Well, it is a big mess, and that's why I argue the only way we'd ever get the full transparent accounting that we need is to have an independent commission like we did for 9/11. That worked. It was independent. It was nonpartisan. They laid out the facts, they ignored the partisan back and forth. We can do this. But to expect it to happen in congressional hearings where Republicans and Democrats both have an agenda to satisfy and the Joint Chiefs of Staff have really demonstrated that they're perfectly willing to carry the president's political water, we're never going to get a ground truth that way.

REICHARD: General Milley said our pullout from Afghanistan created the very real possibility that terrorists from al-Qaeda, ISIS, any other group, could strike the United States. How should we, or can we, deal with that reality now that we no longer have forces on the ground over there?

CARAFANO: Well, we have three problems. One is it's going to happen. Al-Qaeda is going to go back to Afghanistan to erase 20 years of humiliation. They're going to plan the next 9/11. They're going to plan it from Afghanistan. They're going to let the world know that because it's important that the world know what they did. And we have dramatically reduced our capacity to deal with that in theater. And when you look at the flip side, we've dramatically disarmed home. We have a wide open border. It's way more open, wide open than it was on 9/11. It's the safest way to get a team in here to do the next 9/11. We have used our domestic security instruments like the Department of Justice and Homeland Security, really focused on political agendas. We want to focus on domestic extremism, and people that we politically don't like. But we’re not focusing on transnational terrorism. So we've kind of disarmed on both ends of the problem. And that's a more dangerous situation and more vulnerable than we were on the original 9/11.

REICHARD: Final question here. I want to get your take on this. Defense Secretary Lloyd Austin summed up the U.S. experience in Afghanistan like this: “We helped build a state, but we could not forge a nation.” What do you make of that comment? And perhaps most importantly, what are the biggest lessons we need to learn from the last 20 years?

CARAFANO: It’s a nonsense comment. We weren't in Afghanistan to build the nation of Afghanistan. That was kind of a side project. We were in Afghanistan to prevent a terrorist sanctuary from reoccurring, and to keep the region stable. So it would be more favorable to us. And we talked about the great power competition with the likes of China and Russia. We were achieving that. All we did by leaving Afghanistan is make us more vulnerable to transnational terrorism and make the region less stable. Building the nation was not essential to achieving our mission. Being there was essential to achieving our mission. Leaving made doing that thing almost impossible.

REICHARD: Retired Lt. Col. James Carafano with The Heritage Foundation has been our guest. Colonel, thanks so much!

CARAFANO: Thanks for having me.

Victory has 10,000 fathers but defeat is an orphan