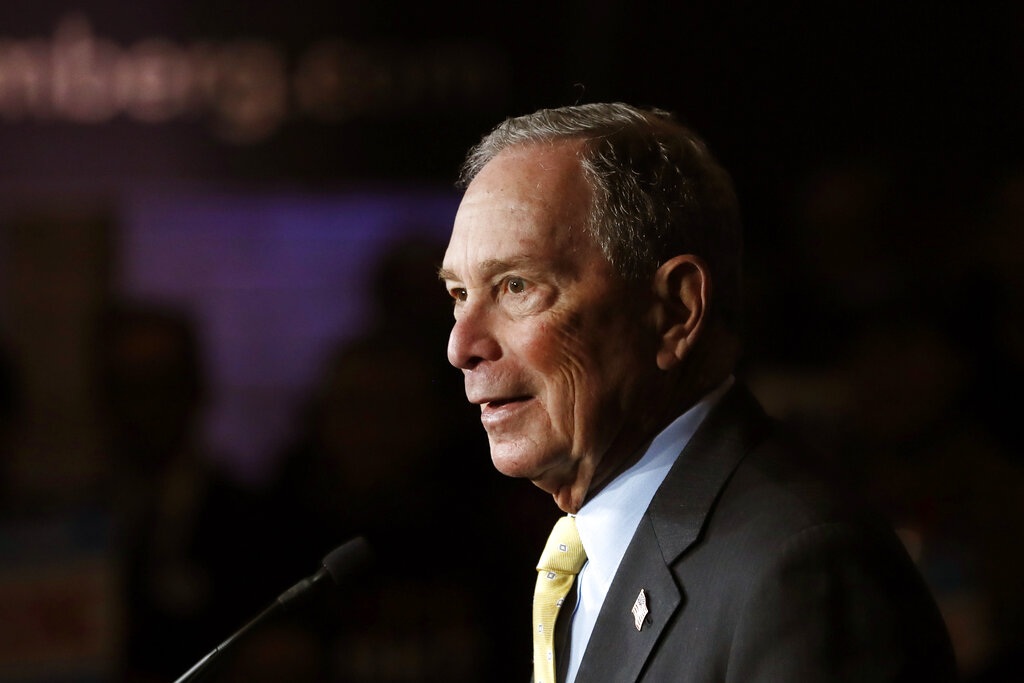 MEGAN BASHAM, HOST: It’s Wednesday the 12th of February, 2020. Glad to have you along for today’s edition of The World and Everything in It. Good morning, I’m Megan Basham.

Before we get rolling today, let me remind you about our offer to share WORLD Magazine with friends. We’re doing that the rest of this month. And thankfully, it’s leap year, so there’s an extra day!

But if you know of people like yourself who appreciate excellent journalism, we want to put WORLD magazine in their hands. And you should certainly point them first to Megan Basham’s review pages!

BASHAM: Haha, that’d be great. But WORLD is such a complete magazine: incisive commentary, honest reporting, deeply reported feature stories, and, yes, cultural coverage of movies, television, books, music, and so much more.

Visit getworldnow.org and it’s so simple to sign up a friend and it costs absolutely nothing. A two-month trial … on the house!

EICHER: Getworldnow.org. And we have had the question: what if I’m not a subscriber, can I sign myself up for the two months? Yes, you can, and we know that most listeners don’t read WORLD and if you have even a little interest, go ahead and sign up and give it a try. Getworldnow.org.

Well, first up on The World and Everything in It: Washington Wednesday.

The 2020 presidential campaign will likely end up as the most expensive in U-S history. Through the end of last year, the Democratic presidential hopefuls had already raised a combined three quarters of a billion dollars. That’s just the Democrats and it’s only the start. Spending on the 2016 presidential election hit nearly $2.5 billion.

BASHAM: The amount of money flowing into these campaigns is staggering. It’s hard to fathom how they even spend that much money! But they do spend it, shockingly fast in some cases.

And that has at least one listener wondering where all that money goes. Last week, listener Mandi Hart emailed to request a campaign finance explainer. She wanted some context for all those big fundraising and spending numbers we’ll be hearing during the next eight months.

So joining us now for a crash course in campaign finance is Professor Mark Caleb Smith. He’s director of the Center for Political Studies at Cedarville University.

Professor, thank you for being here.

MARK SMITH, GUEST: It’s my pleasure to be with you today.

BASHAM: Let’s just start with the basics of campaign finance law. What restrictions are in place for Americans who donate to political campaigns?

So, the restrictions are fairly standard, and they usually consume the whole election cycle. So you can only give a certain amount to a candidate for an entire cycle.

BASHAM: OK, on the spending side, what do candidates do with most of their money? And are there restrictions on the way they spend it?

SMITH: There really aren’t restrictions, necessarily, on the way they can spend their money, as long as they’re spending it without commingling funds. And so if they’ve been given money to spend politically, it’s really up to them to make their choices how they divvy it up.

When you think of a modern campaign, most of their money is going to go into advertising—things like television, radio, and now digital advertising. Some of the campaigns are a little bit more unconventional. Someone like Donald Trump in 2016 didn’t have to spend that much on advertising because he got so much free media through social media and through regular news coverage that he really didn’t need to spend nearly as much as he would have otherwise.

But if you look at most—especially presidential—candidates these days, they’re spending a big chunk of their money on advertising. And then, of course, they’re spending money on staff and infrastructure. Sending out mailers, knocking on doors, those kinds of things aren’t free either.

BASHAM: It was funny, I saw a story today that some campaigns like [Michael] Bloomberg are starting to spend on Instagram influencers and that was a new one by me.

SMITH: Social media is becoming a huge platform, obviously, for campaigns. Bloomberg has no shortage of funds, clearly, at his disposal it seems like. But the best social media outcomes that we can see right now are really organic. You can pay people and you can pay influencers to some extent, but even Bloomberg is struggling to match people like Bernie and Biden and Mayor Pete because they have a lot of organic social media activity that really reflects enthusiasm.

So it’s going to be interesting to see over this election and coming elections whether or not you can purchase that kind of power through social media. Or whether word of mouth and people sharing because they’re interested and enthused is actually more important for a campaign.

BASHAM: That’s an interesting point. And, you know, that brings up the big trend that candidates like Bloomberg and Steyer are spending a lot of their own money—and they have a lot of it to spend. Right now we have campaign finance reports filed through the end of 2019. And they show former hedge fund manager Tom Steyer and former New York Mayor Michael Bloomberg both raised about $200 million dollars. Nearly all of that came from their own pockets.

SMITH: No, no. I can answer that pretty quickly, but no. We have not seen anything like this before. There’s always been something of a stigma in American politics when a very wealthy candidate emerges into the field and begins using their own money to the point where they’re really outspending the other candidates who aren’t all that wealthy. And it seems like maybe we’re getting past that stigma, to some extent.

I’m sure you know, Bloomberg has said that he’s willing to spend up to a billion dollars of his own money on this campaign, and that kind of money is not fathomable for almost anyone else in the world—much less in the political world.

So, no, we’ve never seen anything like this and it’s going to be interesting to see how it plays out. Is it going to be possible for a candidate like Bloomberg especially to literally buy his way to a nomination or buy his way into determining the outcome of the nomination. And if that happens, we have a lot of hard conversations to have.

BASHAM: That brings up an interesting question and that’s that critics are saying that they are going to be trying to buy these elections. Do you think that’s a fair criticism?

SMITH: I think that it is to some degree. I mean, constitutionally they have the freedom to do that. The Supreme Court has determined in multiple decisions—most notoriously in Citizens United, the one that we hear about quite a bit, but also some older decisions like the Buckley case—where the court says spending money for your own political purposes is an element of free speech. And the government can’t limit your ability to speak on your own behalf.

But if we’re looking at a billionaire spending a billion dollars in order to win an election, that’s a whole different thing altogether. So I think it’s a fair criticism, especially with Mr. Bloomberg. It seems like, I’m not even sure what he’s necessarily all that for as a candidate, but I know he’s definitely against Donald Trump. And so it almost feels like he’s spending this money in opposition to somebody as much as he’s spending it on his own behalf.

So, yeah, we have to have some conversations about what it means for one person to be able to leverage an election out of their own pocketbook at a national level. That was something the founders couldn’t have imagined when they were writing the Constitution.

BASHAM: Back in 2016 some people accused President Trump of the same thing—using his personal fortune to gain election. How does that scenario compare to this one for Democrats?

SMITH: Well, President Trump—by the best estimates—spent maybe close to $100 million on his own campaign in 2016, which, again, let’s be honest about it—is an outlandish amount of money that I can’t even fathom. However, compared to Mr. Bloomberg spending up to a billion dollars of his own money does kind of pale in comparison.

Mr. Bloomberg is just blowing through every kind of spending category we’ve seen in the past, including Mr. Trump’s.

BASHAM: It’s definitely a whole new world there. Before I let you go, I want to ask about President Trump’s fundraising numbers. This time around it doesn’t appear like he’ll need to use his own money. Where is he at compared to four years ago and compared to the Democratic field now?

SMITH: Well, the big advantage that Mr. Trump has right now is that he can legitimately claim to be an establishment candidate, as much as he might not like that label. He is the official candidate of the Republican Party. The party has coalesced around him. The party donors have coalesced around him to the point now where he can tap into the party’s resources as an incumbent.

And so, yeah, he’s not going to have to reach into his own pockets or leverage his businesses to run a campaign in 2020.

The Democrats now are in a different position. They’re fractured. They’re contending with each other, certainly, as the future of their own party. They have a lot of division amongst the leaders—like Bernie and Mayor Pete and Elizabeth Warren and Mr. Biden—about who’s going to be the standard bearer.

It’s certainly a different process right now altogether on the Democratic side, which I have to say is interesting because the Democrats have historically been pretty opposed to wealth playing this kind of a role in politics in general. And for Mr. Bloomberg to be making so much headway and polling in other places right now suggest the Democrats are willing to look at all options in order to defeat Donald Trump.

BASHAM: Professor Mark Caleb Smith leads the Center for Political Studies at Cedarville University in Cedarville, Ohio. Thanks for joining us today!

SMITH: Thank you! It’s my pleasure.