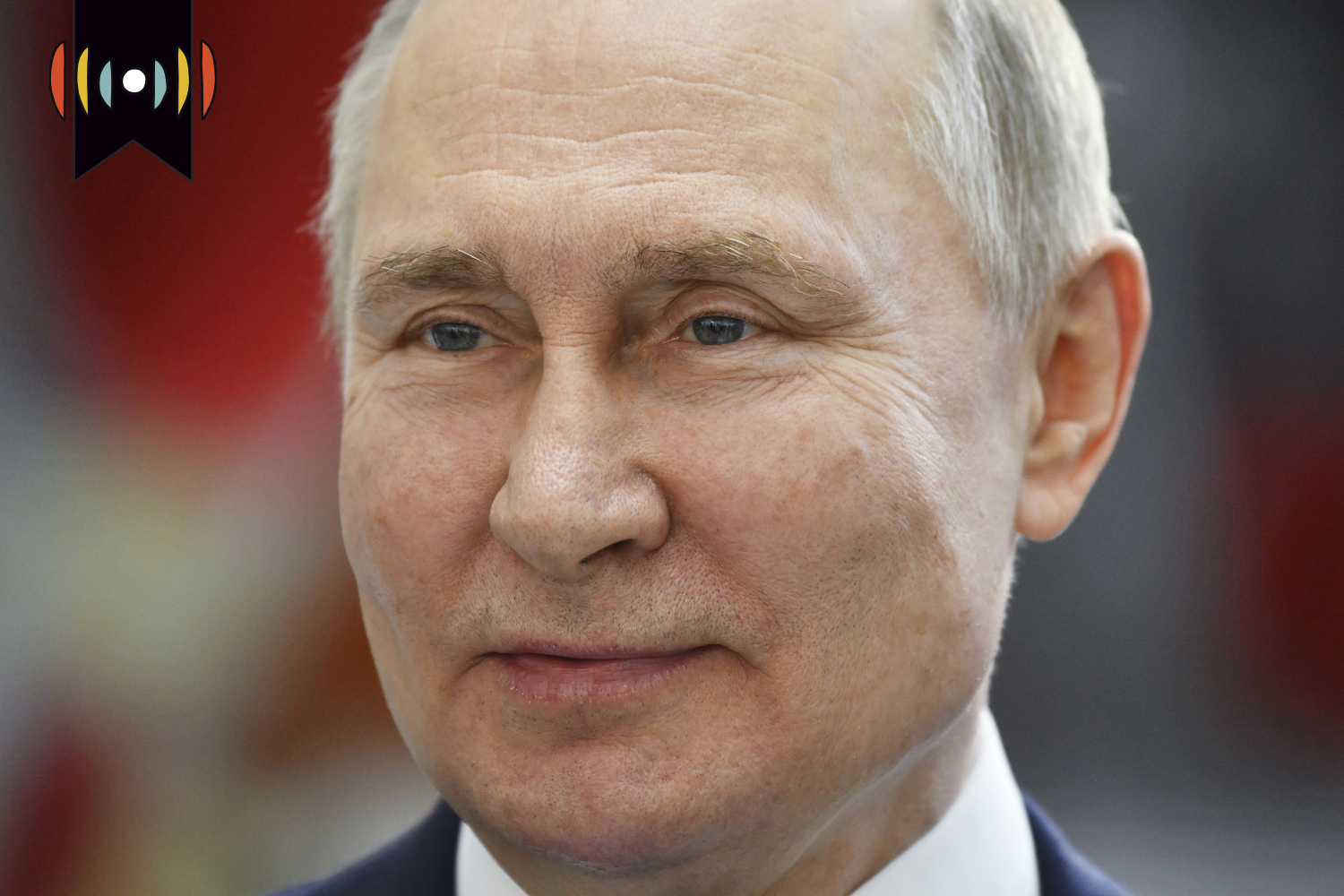 The United States and its allies continue to funnel weapons to Ukraine’s military while ratcheting up sanctions on Moscow.

BIDEN: This war could continue for a long time, but the United States will continue to stand with Ukraine and the Ukrainian people in the fight for freedom.

And there is plenty of bipartisan backing on Capitol Hill to continue robust support for Ukraine. But is Washington doing enough?

On the line now to help answer that question is Elisabeth Braw. She is the Commissioner of the UK’s National Preparedness Commission.

REICHARD: You say that maybe Washington’s biggest misstep with regard to Russia’s invasion of Ukraine isn’t anything they’ve done recently, but what Western leaders didn’t do years ago when Russia invaded Crimea. Talk about that.

BRAW: That is an allegation that is often thrown at Western governments that they should have reacted more forcefully when Russia annexed Crimea in 2014 and it's fair to make that allegation or that criticism of Western governments, but we also have to take into account the risks involved with provoking or holding Russia to account on the issue of Crimea. And we have to remember that Western leaders are elected by their own voters and voters would, I think, most likely have said, well, hang on, why are we risking harm to our own countries by responding forcefully to the annexation of a peninsula that we have nothing to do with? So, that was a situation then and, yes, Western leaders can be criticized, but I think on balance, they said, Okay, we will impose sanctions, which is what they did, we'll expel Russia for various international settings. But we won't risk a war with them. And that reality is clearly different now when Russia has invaded the whole of Ukraine and if a whole country is invaded, there is clearly a moral imperative for the rest of the world to try to stop such an invasion or, indeed, the war that is taking place. And that's where we are now.

REICHARD: About the U.S.-led sanctions put in place since the start of this latest invasion. What effect are they having in Russia?

BRAW: They are certainly making the lives of ordinary people miserable. Most Western consumer companies, consumer brands are leaving Russia, which means that Russia won't be able to participate in the sort of consumerism that they have become used to over the past 32 years. The question is whether the misery of ordinary Russians will be enough to convince Vladimir Putin to end the war. Russia is still able to export oil. And that raises a point, which is where we are now. It raises the point of do we also need to completely stop buying Russian oil? Will the sanctions cripple the Russian economy to the point that Putin can't ignore it? Or do we need to stop importing Russian oil as well?

REICHARD: Let’s talk about weapons now. Washington and its allies are providing defensive weapons and more to Ukraine. But many officials within Ukraine are telling us that it’s not enough. We’ve heard President Zelenskyy say the West lacks courage in not sending fighter jets to Ukraine. Elizabeth, is Washington and its allies—are they doing enough to supply the weapons Ukraine needs?

BRAW: They are doing a great deal and some countries like Estonia have given Ukraine everything they have basically. They have stripped their own armed forces down to the bare bones and given Ukraine an enormous amount of military equipment. The challenge is that, first of all, the Ukrainian Armed Forces are trained on particular pieces of equipment. So even if the U.S. wanted to send hundreds of Abrams tanks to to Ukraine, the Ukrainian soldiers would not be able to use them because they are trained on different tanks, which is why there is so much talk about sending old East German equipment because it's similar to what they know because it's old Soviet equipment, really. So now countries, former Warsaw Pact states are going through their chambers to see if they have any old East German equipment they can send the Ukrainians.

Then the other challenge is with what are called offensive weapons. So there is really no definition of what an offensive weapon it is, but it's really just something more powerful than what the Ukrainians have received so far. And there is hesitancy among Western governments to send offensive weapons because they worry that that will escalate the conflict. The counter argument, of course, is that it's already a very brutal conflict. And the Ukrainians need all the weapons they can get in order to shorten the conflict as much as possible. There are just completely different views on what to do. But the logistical point is that the best chance they have at the moment is by receiving as much East German and other Warsaw Pact equipment as possible.

REICHARD: We’ve heard about the atrocities uncovered in Bucha—civilians tied up and shot dead, left in the streets- did that change Washington’s stance in any way?

BRAW: I think it did. It's very easy to treat the war as an abstraction simply because most of us are not seeing it ourselves. We're seeing it on a television screen. It's so easy to become desensitized to the absolute brutality of war, but when we see civilians with their hands bound behind their backs and shot in the street, and there was a particularly poignant or powerful photo of a man who had clearly been been riding his bike, had been shot dead, he was lying next to his bike, and his his dog was waiting next to him clearly thinking he would wake up. This is the reality of war and no normal person could escape being touched by such images and motivated to do something. I think this is the turning point. It's the point where this war moves from being something about two armed forces fighting each other to a reality settling in that it's about the Armed Forces of one side targeting civilians in a brutal fashion. And we are just incredibly lucky that it's not us.

REICHARD: In your view, what does the West need to do that it is not doing to ensure Ukraine wins this war?

BRAW: There are two things that need to happen. First of all, a steady supply of weapons to Ukraine so that it doesn't have to worry about running out of either weapons or ammunition. It has to be sure that it can use everything it needs, and not worry about where will we get additional supplies from. That's the first thing. The second thing is cutting off oil imports from Russia, oil and gas imports. Now, this is a very painful step to take for many European countries, especially Germany, because they rely on German energy to a very large extent. But Russia seems unwilling or, I should say, Vladimir Putin, the President of Russia, seems unwilling to reason or to consider the harm that he's doing to Ukraine. So this is our one remaining tool that we can use against him because without that monthly, in fact, daily income from Western countries, he would have enormous trouble financing this war and would need to end it sooner rather than later.

REICHARD: Finally, Elisabeth, I know that the biggest focal point of your studies is deterrence. What lessons should Washington and the West take from all this to prevent future aggression from major world players, be it from Russia or say China?

BRAW: We should be very conscious of the fact that we need to tell countries that there will be consequences if they take actions that are harmful to our countries or countries that we consider to be our friends. And that's where there is an enormous responsibility for the U.S. because it's such a powerful country. It's not enough to wait until aggression happens and then say, Oh, we're going to punish you now. We have to constantly tell these countries that if you engage in military aggression, but also other forms of aggression, including economic coercion, cyber aggression, disinformation, we will punish you and this is not a way of trying to be some sort of global police. It's a way of establishing a working order for the world. If we don't have a sort of working order where countries can be relatively sure that they can keep existing without interference from other countries, we will have anarchy. So it's in everybody's interest that we have a sort of functioning global system and the U.S. is in a position to keep reminding countries like Russia, like China, like Iran, like North Korea, like any other or any other country that may get ideas along these lines that if you harm another country, you will pay a price.

REICHARD: Elisabeth Braw is a senior fellow with the American Enterprise Institute. Elisabeth, appreciate your time. Thank you.