Washington Wednesday: One year since the Afghanistan withdrawal

WORLD Radio - Washington Wednesday: One year since the Afghanistan withdrawal

What have we learned in the year following the troop pullout from Afghanistan?

Hundreds of people gather near a U.S. Air Force C-17 transport plane at the perimeter of the international airport in Kabul, Afghanistan, on Aug. 16, 2021 Associated Press Photo/Shekib Rahmani 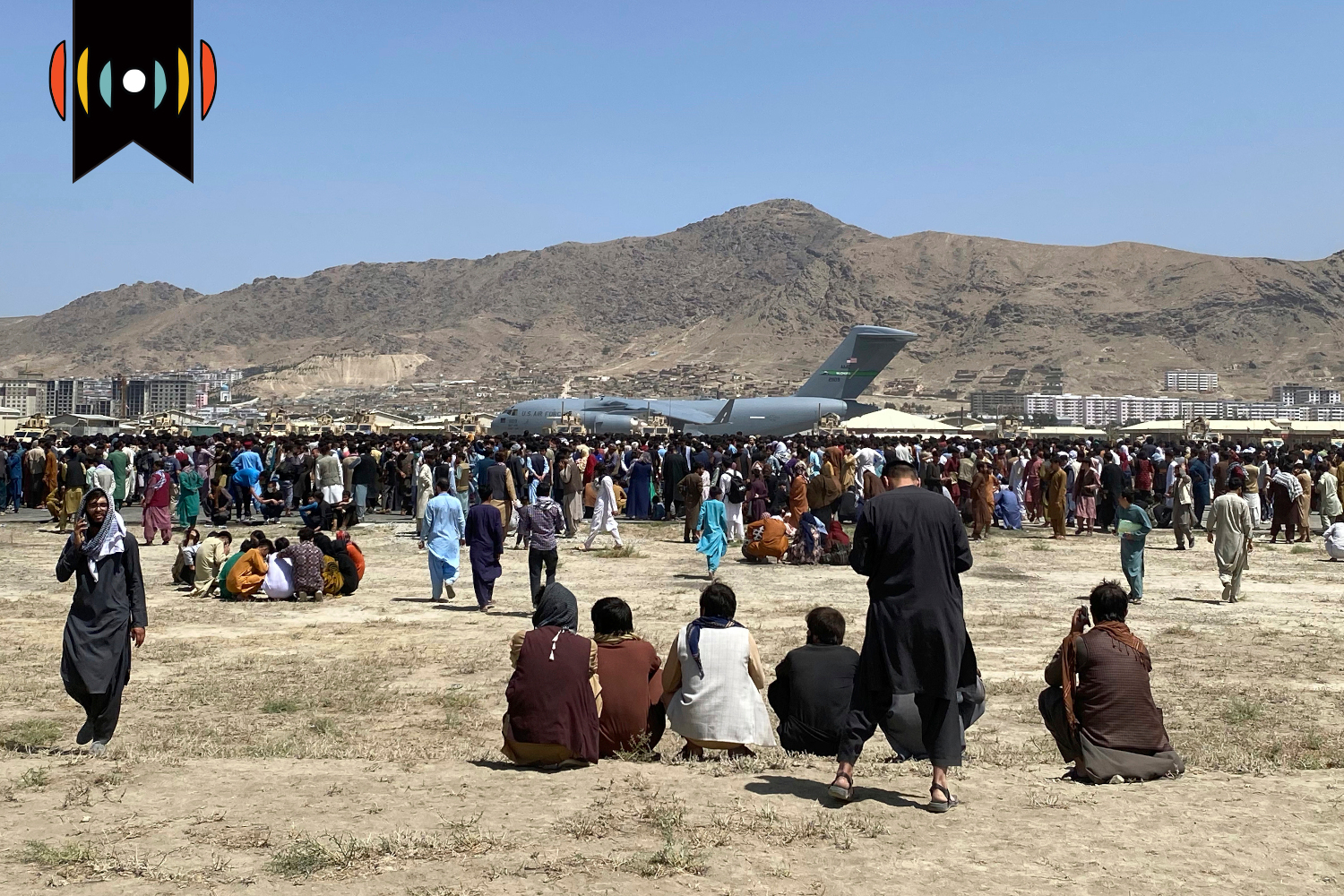 NICK EICHER, HOST: It’s August 17th, 2022. Glad to have you along for today’s edition of The World and Everything in It. Good morning, I’m Nick Eicher.

This week marked the one-year anniversary of the Taliban’s takeover of Afghanistan’s government as U.S. forces withdrew.

Republicans in the U.S. House put together a scathing report about the chaotic U.S. pullout. It says the Biden administration ignored intelligence warnings and badly mishandled the situation.

EICHER: The administration has fired back, saying the report is riddled with inaccuracies and that the United States is better off one year later because President Biden gave the order to leave.

And State Department spokesman Ned Price said the recent strike against al-Qaeda’s leader in Afghanistan shows that America can still battle terrorists in the country from afar.

Well, joining us now to talk about it is James Carafano. He is a retired Lt. Col. in the U.S. Army. He formerly served on the Homeland Security Advisory Council.

JAMES CARAFANO, GUEST: Hey, it’s good to be with you.

REICHARD: Michael McCaul is the top Republican on the House Foreign Affairs Committee. And he said that the intelligence community and that military told lawmakers that Kabul could fall to the Taliban sooner rather than later, but the White House continued to paint a rosy picture.

Colonel, take us back to August a year ago. What is your understanding of what warnings were issued ahead of the Taliban’s takeover?

CARAFANO: Well, look, I can absolutely testify that the entire U.S. response was chaotic and ad-hoc. I was emailing with people in real time as this was all going down. For example, if it wasn’t for the Qataris, we would have had no place to take anybody. I mean, essentially the Qataris gave us an air base or let us use the air base to fly people in there. That was actually run by the U.S. embassy because there was no staff to run that. So they actually took the people out of the embassy and they threw them down there to do this. That wasn’t planned. Then they basically went and recruited retired State Department people and flew them over to run this thing so the embassy people could go back to the embassy. They ran the entire op on some cell phones that they borrowed from the embassy and they used WhatsApp. So the entire U.S. operation in Qatar was run off a commercial app. So the notion that somehow this was planned or well-executed or we really thought through all the contingencies, that’s just nonsense. It’s just not true.

CARAFANO: No, it is. I mean, Look, I’ve been doing this business for 20 years. I have never been engaged in a crisis like this since I retired from the military in real time. So, literally I’m telling the people, for example, I would say hey, we’ve got a plane on the ground in Kabul and we are evacuating our people. We’ve got a couple empty seats, anybody need them? And then connecting them by email with people from the American University of Afghanistan in Kabul saying, “Yeah, we’ve got people we’ve desperately got to get out of here, being hunted by the Taliban, who are hiding in safe houses.” And then talking to other people saying, “Does anybody have security that can get these people through the Taliban checkpoints to the airfield?” and then, “Does anybody know which gate is open?” And literally having these people run from gate to gate and then couldn’t get in through the gate, the plane had to leave because they didn’t want to lose their place in the flight schedule.

And I was watching this unfold across my email. This was a disaster that our government created because they wanted to bug out.

REICHARD: Colonel, do we have a clearer picture now of how many American citizens and US-allied Afghans were left behind last year?

CARAFANO: Well, the official U.S. stat is like 800 people considered Americans were left behind. I don't think there was any verification of that number or any accounting of their fate. We know the number of Afghan allies that we work with, interpreters, etcetera, are in the many thousands. Some of them are still in Afghanistan. Some of them are in other places around the world. They're offered to come to the United States, they haven't been permitted to do that. So the human misery of the evacuation is not over. The suffering inside Afghanistan is literally catastrophic.

Women are back to the situation that they were. Children cannot go to school. There's estimates of upward of 20 million people who are in famine or the like conditions. I think a lot of people don't realize the U..S government continues to dump money into Afghanistan in humanitarian assistance. We have no idea where it goes. It goes into an absolute black hole. There's no accountability, no transparency, to think that it isn't winding up in the hands of the Taliban is just foolish.

REICHARD: Well as we mentioned, State Dept. spokesman Ned Price said that the recent strike against al-Qaeda’s leader shows that we can still fight terrorism in Afghanistan. And there’s a new intelligence report suggesting that al-Qaeda “has not reconstituted its presence in Afghanistan.” So is Mr. Price correct?

CARAFANO: I have a different read on that. I mean, look at what we have here. We have the most hunted terrorist in the world living virtually openly in the capital of Afghanistan against an explicit agreement that the Taliban made, being hosted by the Haqqani Network, which is the group that originally brought al Qaeda to Afghanistan.

It took the U.S. government four months to find this guy and take him out. Now, that's an operation of when the U.S. had a footprint in Afghanistan that we could have done in a day and the cost of it would have been virtually negligible. At a time under the former president, President Trump, we were spending in Afghanistan in a year about what we spent under President Obama in a week. And we were taking zero U.S. casualties. So he had a firm footprint. We definitely were keeping al Qaeda at bay. Now we have virtually no visibility of what's going on inside the country. It takes us months to find and kill one terrorist at great expense and a lot of effort. It reminds me so much of the Clinton years when we just used to lob cruise missiles at Osama bin Laden and say we were keeping the terrorists at bay.

REICHARD: Colonel, the Biden administration says it’s still better we’re out of Afghanistan and has put America in a better situation to address other concerns and priorities around the world. Do you agree or disagree and why?

CARAFANO: I don’t think there’s any evidence for that. In fact, I think it's the opposite. I mean, when you look at what are American interests in Afghanistan, why were we there? When the administration left, they really had no answer for any of those questions and I don't think we have any better answers today. One, of course, is terrorism and we've talked about that, that we have very little footprint, we have very little intelligence.

That we are essentially back to the situation where we were on September 10, 2001 with very limited capacity to stop planning and preparations for major terrorist assault. At the same time, by the way, we have a wide open border. And we are actually arresting people all the time on the terrorist watch list coming across the border. So I don't think we're better off on that account. Another concern was the U.S. was leaving the region, opening up to China. I think that's just as open as it was before. And then of course, regional stability, we wanted a stable region so our regional partner India could really focus on China, which is really our great strategic threat. Nobody's better off in the region. Afghanistan is a basket case. The Indians have to worry about that. So look, I'm not trying to be critical of our government. I would like them to be successful. I'm not being partisan. I don't even belong to a political party. I don't have a dog in this fight. I'm just an analyst. But to just say well we're better off leaving Afghanistan strange credulity, particularly when you think that I think a lot of people in the history has written will be able to draw a line between what happened in Afghanistan and what happened in Ukraine, that the Russians looked at what the U.S. did in Afghanistan and they said, “If the United States isn't going to meet its commitments there, they're probably going to do nothing if we attack Ukraine.”

I think because we were so feckless in Afghanistan, I think the Russians saw that. I did see that as another reason to greenlight the Ukraine operation.

REICHARD: We’ve been talking to James Carafano. He is Vice President of the Institute for National Security and Foreign Policy at the Heritage Foundation. Colonel, thanks so much! Appreciate your time.

CARAFANO: Hey, thanks for having me. I love the show and love what you guys do. So really always really appreciate it.