Birds fly past the U.S. Capitol at sunset, Wednesday, Dec. 15, 2021, as seen from the Senate side on Capitol Hill in Washington. Jacquelyn Martin/Associated Press Photo 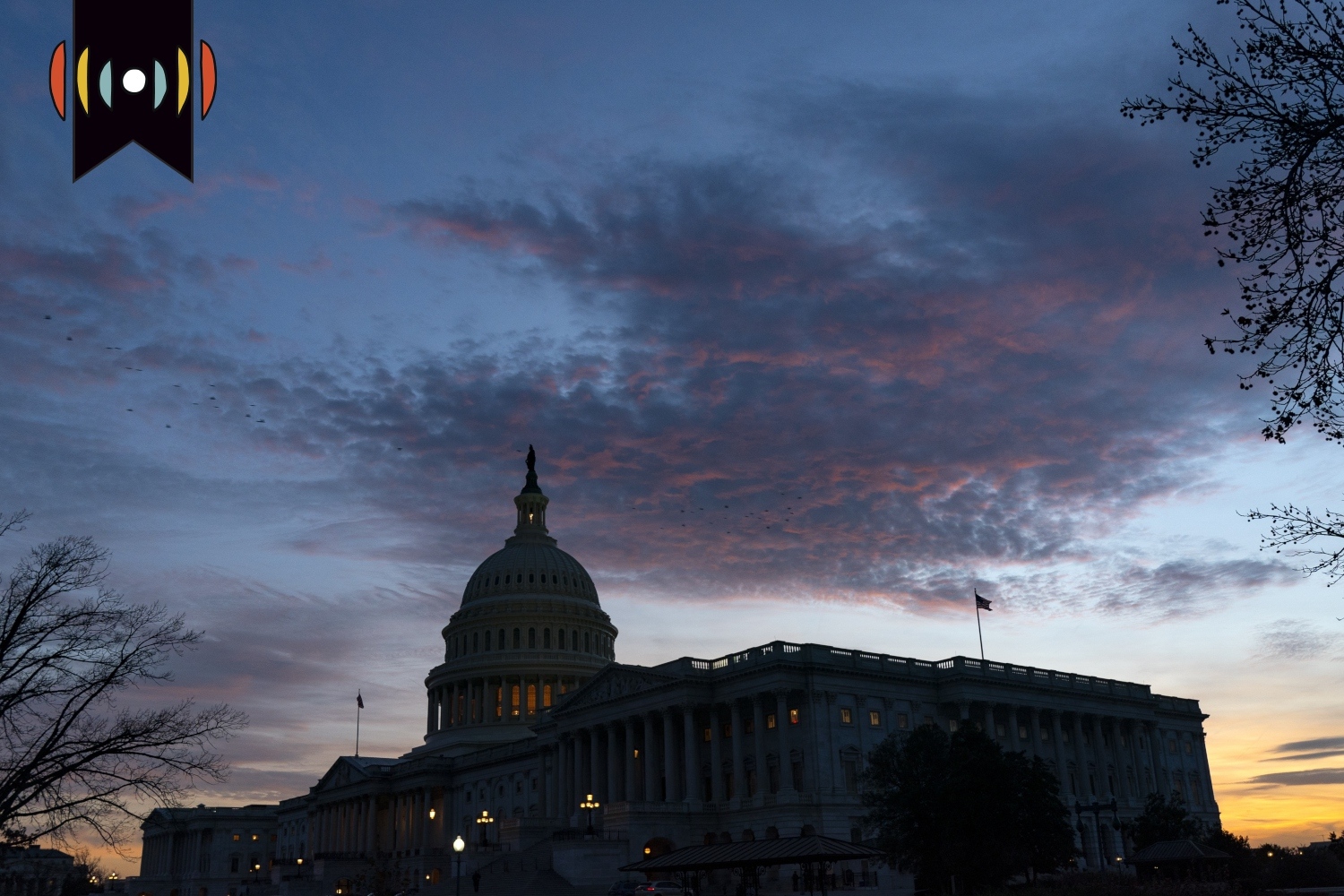 Thank you for joining us today for The World and Everything in It. Good morning, I’m Mary Reichard.

NICK EICHER, HOST: And I’m Nick Eicher. Up first: political battles ahead in the new year.

2022 is, of course, an election year, and with Democrats holding bare legislative majorities, it’s likely Republicans could take control after November.

So what are the big races to keep an eye on this year that will determine control of Congress?

REICHARD: Joining us now to answer that question is Kyle Kondik. He is an elections analyst and director of communications at the University of Virginia. Kyle, good morning—and first of all, I’m really glad you’re not stuck on a highway somewhere in Virginia!

So to control the Senate, Democrats need to win 3 of those 4 toss-up races. Republicans just 2.

Let’s take a moment and briefly break these down, and let’s start with Pennsylvania. Talk about that race.

KONDIK: Yeah, it's an open seat. It's the most vulnerable Senate seat that the Republicans are defending. Of course, Pennsylvania is arguably the kind of the premier swing state in American politics right now. Pat Toomey, the 2-term Republican senator is retiring. And there's kind of an open question on both sides of the aisle as to you know, who the candidates will be. You know, kind of a familiar theme, as we talk about these races, I feel like that if President Biden's numbers are as weak in November, as they are now, you know, usually in that kind of environment the party that doesn't hold the White House, you know, benefits in the midterm. And so you might expect Republicans to, you know, win this race, ultimately, and be able to hold this seat, even if their candidate doesn't end up being great. And, you know, we'll have to see who emerges. I guess the most recent kind of big news in that race was the emergence of a TV doctor, Dr. Oz, who, you know, is certainly unproven as a candidate, but, you know, maybe maybe he's able to win the nomination. And, you know, be in the U.S. Senate. It won't be the first time you'd have somebody with no political experience immediately winning a high profile race. So, you know, again, there's a lot still to be determined, but election results in Pennsylvania are always interesting to watch because the state is just so important at the presidential level.

REICHARD: Alright. Well that’s Pennsylvania. Let’s go to Georgia now, the state that delivered control of the Senate to Democrats in 2020. Who are the major players in that race?

KONDIK: So Raphael Warnock, the Democrat who won a ‘20, actually was 2021, early 2021, Senate runoff. He has to run again to try to get a full term here in 2022. Probably the likeliest Republican candidate is Herschel Walker, former NFL running back who is heartily supported by former President Trump. There are other candidates running in that race, though. And Walker is another kind of unproven outsider, Republican candidate. Georgia has historically, in recent years, has been a Republican state, but it's sort of zooming toward the Democrats so much so that, you know, Democrats, of course, hold both Senate seats from Georgia now. John Osoff won a full term in the last cycle along with Warnock winning this partial term. And you've seen a lot of Democratic growth, particularly in the metro Atlanta area. We know that there are a lot of states kind of switching roles in American politics. You know, Georgia is one that certainly has become more Democratic in recent years. You're also gonna have a blockbuster gubernatorial race in that state. Brian Kemp, sitting Republican governor, faces a primary from David Perdue, former US senator. And then also Stacey Abrams, who nearly beat Kemp in 2018 is the likely Democratic candidate. So in terms of star power, and nationally watched races, you know, Georgia is pretty high on the list.

REICHARD: Mm-hm. Well, let’s move from Georgia now to Nevada. What about the Senate race there?

KONDIK: Catherine Cortez Masto is the first term Democratic incumbent who's going to be seeking another term. She's probably going to face Adam Laxalt, who is the former state attorney general who lost a pretty competitive race for governor in 2018. You know, Laxalt is a pretty conservative candidate, but he's certainly capable of winning in the right kind of environment. And, you know, Nevada seems like the kind of state where if the Democrats numbers don't get better, you really could see the party struggle, because the Democrats have been sort of losing support, particularly with kind of working class voters of all stripes. And there's been some weakness with Latino voters. And you know, Nevada has a pretty diverse working class electorate. So I almost think that Nevada might be the most vulnerable of the Democratic held Senate seats, although, you know, Georgia is certainly another one. On the other hand, typically, Democrats in Nevada have kind of an organizational advantage over Republicans, and that has allowed them to kind of eke out close victories in 2016, 2018, and 2020. But this may very well be a harder political environment for Democrats than than any of those past elections were. So this is one to watch, and may very well be, you know, the top Republican pickup opportunity in the country, although again, you can sort of split hairs as to which state that might end up being.

REICHARD: Interesting. And then in Arizona, Democratic Sen. Mark Kelly is running for reelection. How’s that race look?

KONDIK: Yes, another race was sort of an uncertain Republican field. You know, one of the themes I think so far is that, I don't think Republicans necessarily have gotten their, you know, top tier star candidates in a lot of these races. One of the other vulnerable Democratic senators is Maggie Hasson of New Hampshire. But the popular sitting Republican Governor Chris Sununu decided not to run for Senate, which I think was a blow to Republicans because they really thought that had Sununu run that maybe that would have been their best pickup opportunity. But again, you look at you know, Georgia, Arizona, Nevada. I don't know if there's a, you know, clear kind of star candidates in any of those races. But given the environment, it may be that Republicans could win all those races. But again, it's the field still sorting itself out. In Arizona, you know, Kelly was leading the whole time, he also won a special election in 2020. So he's running for a full term here in 2022. You know, he was leading the whole time, but ultimately, you know, his race ended up being relatively close, roughly two point race. So it wouldn't take much in terms of the political environment to, you know, to, you know, for Arizona to go back to electing a Republican. I mean, purple states often break against the president's party in a midterm environment.

REICHARD: Okay, Kyle, that’s the Senate. Let’s talk about the House now. There are, of course, well over 400 seats in the House. Democrats currently have a slim 9-seat majority. How are you sizing up the battle for the House?

KONDIK: One of the developments over the holidays is that we actually had a lot of states finalize their redistricting process. Based on our own kind of ‘back of the envelope’ look at redistricting, we've got Republicans up a little bit and Democrats down a little bit. And that, but that's not taking into account necessarily the political environment, you know, the President's party almost always loses House seats in midterms, we got to see how the rest of the map will shake out. But, you know, the Republicans are very well positioned to win the House. In some ways they did a lot of their work in 2020 in that, you know, they ended up netting seats instead of losing them. And so they got pretty close to the House majority in 2020. And, you know, they only need to win five more seats than they won last time. So it's, I think they're, they're well positioned, as you know, as the battlefield takes shape. You know, again, we're still waiting on some of these districts to be drawn.

REICHARD: I know oftentimes, when the odds are stacked against one party heading into an election, we see a lot of retirements in the House. Are you seeing that trend?

KONDIK: Yeah, look, there's a lot, been a lot of Democratic retirements. It's a mix of older veteran members from safe districts who don't really face any threat in, in 2022, but maybe don't want to serve in the minority, or maybe they just feel like now's a good time. Because again, a lot of a lot of, you know, definitely kind of older members in the Democratic House caucus. But then you also have some members from swing districts who retired, you know, a while back. I mean, Cheri Bustos from Illinois. Ron Kein from Wisconsin. More recently, Stephanie Murphy from Florida. And whereas you look at the Republican retirements, there are fewer of them, and they aren't in as many vulnerable seats. So, you know, retirements, particularly if there's a disparity for one party or the other, can sometimes tell us something about the environment. I think that the retirements broadly tell us what the bigger picture is, was that, you know, the Democratic chances in the House are not not great.

REICHARD: Final question here, Kyle. Are there any seats in the House that you look at and say, boy, if this goes the Republicans’ way or the Democrats’ way on Nov. 8th, it’s going to be a really long night for one party or the other?

KONDIK: Um, yeah, look in some of these states that just finished up redistricting over the holidays. Arizona, Michigan, and California are all commission drawn states. And Republicans got a pretty decent map in Arizona, and so they could probably pick up two or maybe even three seats in that state. You know, California continues to tilt toward the Democrats, but there are some, you know, Democratic targets in that state that that, you know, that we could potentially fall to Republicans, although that California usually takes so long to count their votes that they won't be, that state and particularly on the West Coast won't be a leading indicator really. But in Michigan, I think the commission did a good job there of drawing a lot of really competitive seats. And so if you see those seats in Michigan break one way or the other that'll probably tell us something about what's going on in the House.

REICHARD: Kyle Kondik is an elections analyst with the University of Virginia’s Center for Politics. Kyle, thanks so much. Appreciate your insight.