Washington Wednesday - Not all rise 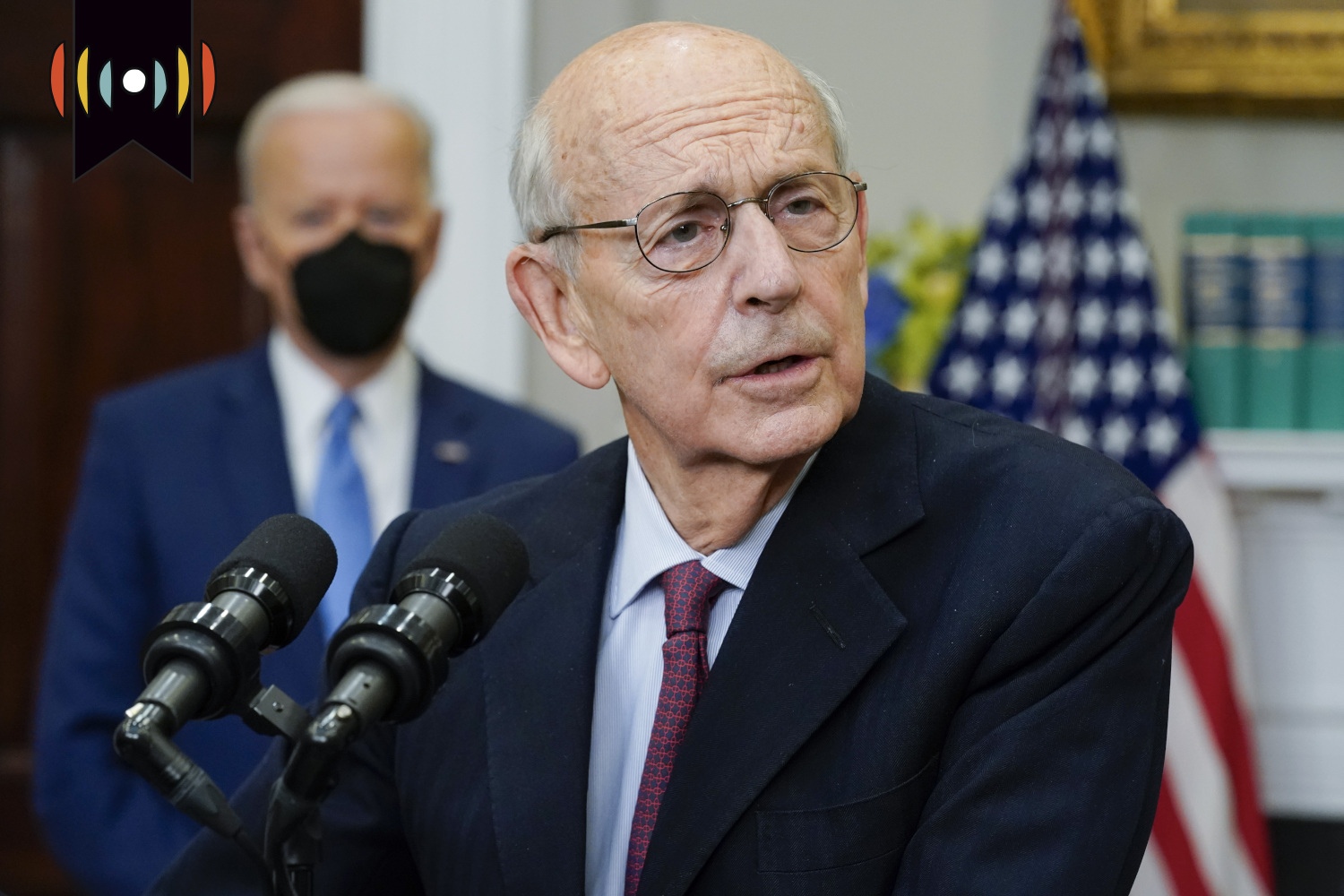 Breyer is one of just three liberal justices on the high court and last week he said he’s planning to retire later this year when the current term is over.

That brings to an end nearly three decades of service on the high court. President Bill Clinton named Breyer to the court in 1994.

His retirement gives President Biden his first chance to seat someone on the Supreme Court, a choice he’s telegraphed about as plainly as any president has in recent memory: saying that the nominee will be a black woman.

REICHARD: Joining us now to talk about what we might expect is Mike Schietzelt. He is a Constitutional Law Fellow at Regent University School of Law in Virginia. Mike, good morning!

REICHARD: Well, let’s just start with the only thing we know right now, and that is the race and sex of the nominee. Some ask how this is even legal, given laws against discriminating on the basis of sex and gender do exist. They say it should be the best qualified candidate, demographics aside. Even among those who don’t have a problem with considering demographics to make the court more diverse, they say, why are Asian judges, Native American judges, and so on, being told they won’t even be considered.

So here’s my question: is this entirely within a president’s discretion? And are there any rules that do apply when searching for someone to fill an empty seat on the Supreme Court?

SCHIETZELT: It’s a great question. Keep in mind that Joe Biden isn't the first person to have restricted himself in this way. President Bush wanted to pick a black justice to replace Thurgood Marshall. President Reagan had committed himself to choosing a woman for his first nominee and he chose Sandra Day O'Connor in 1981. So this isn't entirely unprecedented.

Now, to be fair to President Biden, he did also say that it will be a person of the highest qualifications. And that is, of course, the you know, one of the things that he's going to be looking for – there are no – I wouldn't say there are any formal qualifications that are required by law, but you want somebody who has an impeccable resume.
But other than that, I mean, you want somebody who's going to be young, who's going to have the ability to last on the court for a while. This is an important part of the president's legacy. And, of course, there are always political considerations at play.

REICHARD: Well we know the president hasn’t made his nomination yet, but analysts have put together a short list of potentials. Which of the prospective nominees have caught your eye, Mike, as strong candidates?

SCHIETZELT: Well, there are three I think that really stand out. Judge Ketanji Brown Jackson is widely regarded to be the front-runner. She's been on the D.C. Circuit since last summer, I believe. She has spent many years as a trial court judge in the U.S. District Court in DC. She just went through the confirmation process last year. So they know that she's confirmable. She has the impeccable resume you'd be looking for. Harvard Law. She's young, she's 51 years old, so she's right there in that wheelhouse. The second I would say is justice Leandra Krueger of the California Supreme Court. She's been recognized as a rising superstar since very early in her career, very much the same way Brett Kavanaugh was on the right. She served in the Solicitor General's Office. She's argued 12 times before the United States Supreme Court. She clerked for Justice Stevens on the U.S. Supreme Court. I should have mentioned that Judge Jackson clerked for Stephen Breyer, so she would be the second person to replace the judge she clerked for. Back to Leandra Kruger, though. She's been celebrated when she was appointed to the California Supreme Court—attorneys on the left and right praised that decision. And again, she's very young at 45 years old. The third potential replacement, I would say, is Judge J. Michelle Childs of the district court of South Carolina. And the interesting thing about this is that she's being pushed by Representative Clyburn from South Carolina who we know has great sway. He definitely has the president's ear. His endorsement was likely or had some influence on the South Carolina primary that turned the president's campaign around. So it'll be interesting to see who he picks toward the end of this month.

REICHARD: Speaking about Judge Childs, then. This idea of diversity on the court. Most of the justices are Ivy League graduates. They have a certain kind of pedigree on their resume. What about this diversity of life experience? It does seem that Judge Childs fits that broader definition of diversity. What do you think?

SCHEITZELT: Absolutely. You want somebody who thinks, you know, we talk about qualifications … let's back up a step. We talk about qualifications all the time. And we tend to think of it in ways that I've described—somebody who has the resume, somebody who has the clerkship, somebody who has the law school, and the honors on their degree. But I think there are a lot of people out there who have never been to law school who exercise better judgment than many attorneys and possibly many judges. So there is this idea that a different life experience makes the court more representative of the people, which is always a concern when you talk about the nine justices on the Supreme Court. They tend to reflect Ivy League backgrounds, all except for Justice Barrett, currently, have an Ivy League background. So I think there is something to that, right? You want somebody who is able to think like the average person out there, which is not to say anything about Judge Childs' ability to do the job or her substantive experience. From what I understand she has great credentials. She has an LLM from my law school, Duke University. So she's definitely got the intellectual rigor there. She's got the capability to do the job. But there's definitely something to be said for having that diverse life experience and not having been raised in you know that elite background.

REICHARD: Well, we know that whoever President Biden picks, the ideological makeup of the bench won’t change. Six mostly conservatives to three consistent liberals. But are there other ways a new justice could influence the court, aside from casting votes and opinions?

SCHIETZELT: Yes. You know, there was a justice—and it's slipping my mind, maybe Justice White—who said that every time you wind up replacing one justice, you essentially end up with a new court. It always changes the dynamic when you change one person on the court. They spend a lot of time together. I mean, there's a lot of solitude when you're a judge. A lot of time spent trying to make these decisions, trying to avoid the appearance of ethical impropriety. So these justices, they spend a lot of time together. And when you change just one personality, that can have a huge impact on the court. And of course, if you choose somebody who, you know, Stephen Breyer had this massive tower – had, I don't mean to speak about him in the past tense – but he's a man of towering intellect. He was an academic, a Harvard law professor before he joined the federal bench. And that's difficult to replace. So it's gonna change the dynamic even if you pick somebody with a towering intellect like Leandra Kruger's, you know, it's going to change dynamics and there's really no way around that.

REICHARD: Let’s talk about Senate procedure now. Of course the Senate must confirm the president’s nominee. As of 2017, the Senate rules have changed for Supreme Court picks. The filibuster is not a factor. That means Republicans won’t have a meaningful say in who Biden picks. But there are a couple of reasonably moderate Democrats who will have a say. Do you foresee any possible circumstance under which Sen. Joe Manchin or another Democrat says “no” to the president’s pick?

SCHIETZELT: I think the only way that plays out is if they pick somebody who is much further to the left than any of these three women. Now, all three of these women are that we've named here—Judge Childs, Justice Kruger, and Judge Jackson—they're all fairly moderate picks in the grand scheme of things. They definitely rest to the left of someone like me, but they are fairly moderate and I don't think that's going to be a problem for any of the moderate senators on the left. And already we've seen that Tim Scott and Lindsey Graham—both senators from South Carolina—have come out pushing Judge Childs as well. So if Judge Childs were the nominee, there seems to be at least two Republicans that would cross over and vote for the nominee. .

REICHARD: But they certainly want to push this through before the Midterm election, I assume.

SCHIETZELT: Oh, certainly. And this is a lifeline for the president who's had a very difficult time pushing any of his legislative agenda through or getting any sort of traction with any of the actions that he's taken right now. It's been one blunder after another. And this is a way for him to project or to gain some confidence with the electorate that he's capable of doing this job, that he's capable of making a solid selection. This is something that he'll be able to take to the voters and say, you know, we can get the job done.

REICHARD: Mike Schietzelt with Regent University School of Law has been our guest. Mike, thanks so much!

SCHIETZELT: Thank you so much, Mary.