Despite ongoing U.S. aid efforts, conditions in Central America aren’t getting any better

In this Jan. 16, 2020 file photo, Honduran migrants hoping to reach the U.S. border are stopped by Guatemalan police near Agua Caliente, Guatemala, on the border with Honduras. Santiago Billy/Associated Press Photo 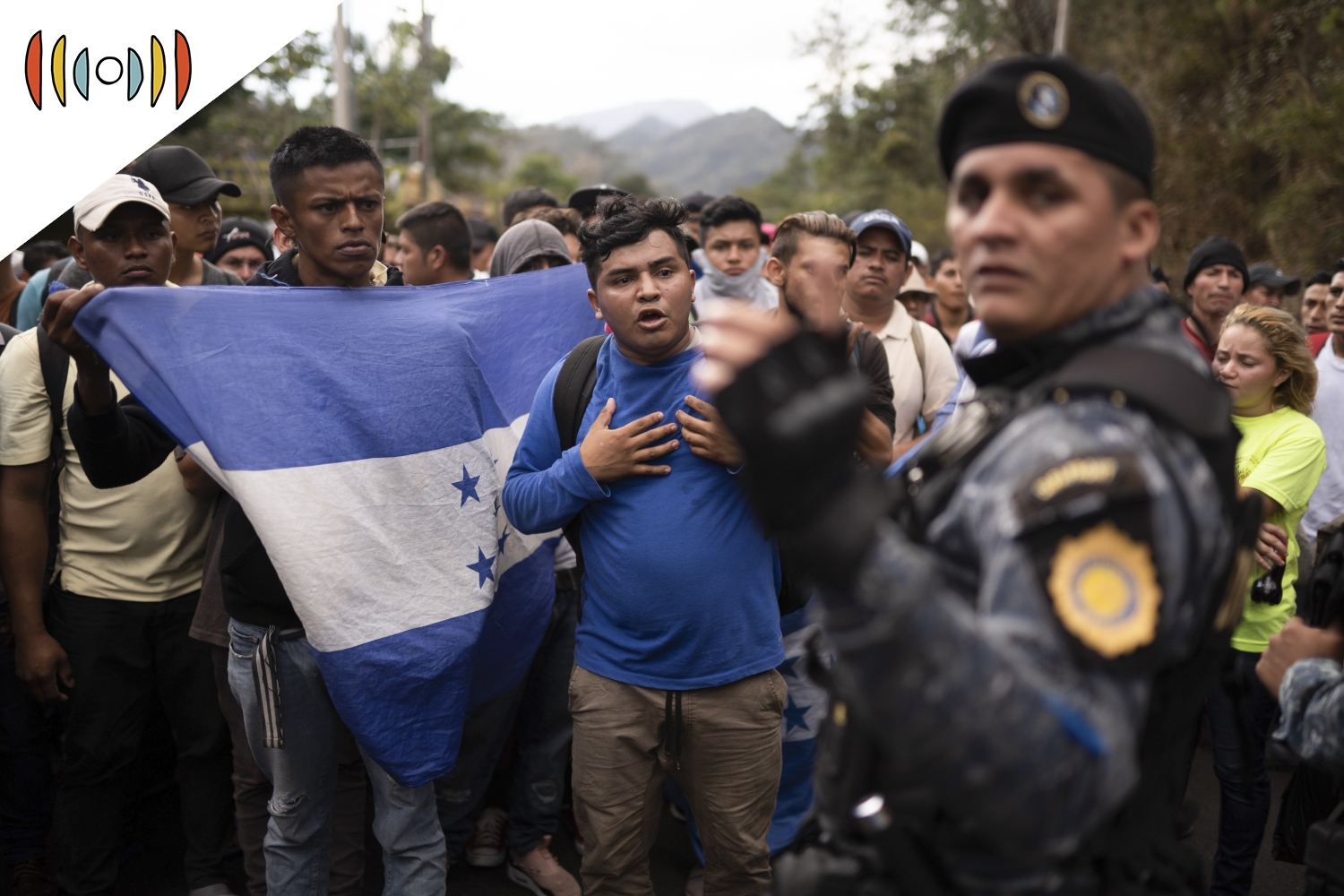 NICK EICHER, HOST: And I’m Nick Eicher. First up: another attempt to solve the surge at the border south of the border.

Last month, the White House announced more than $300 million in aid to the so-called Northern Triangle countries in Central America. That would be Guatemala, Honduras, and El Salvador.

REICHARD: And this is just step one. President Biden has proposed $4 billion in aid to those countries and he’ll spread that out over four years. The aim is to address why people are willing to take such a dangerous trip to the U.S. border. Likely reasons include poverty, violence, and government corruption.

EICHER: The newly announced aid is a return to the approach of the Obama administration. It had allocated more than one-and-a-half billion dollars for Central America as part of what it called the “Alliance for Prosperity” plan.

REICHARD: You started your report by describing a particularly interesting statue in Guatemala. Talk about that statue and what it tells us about what’s happening in the region.

DEAN: If you ever visit the town of Salcaja in the western highlands of Guatemala, it would be hard to miss this particular statue. It stands at the entrance of the town on a large platform, and it’s a 40-foot tall depiction of a man in simple clothing carrying a backpack and waving north—toward the southern border of the U.S.

It’s called the Homage to the Migrant. And it’s this town’s way of paying tribute to migrants who have made the long trek to the U.S. and sent millions of dollars in remittances back to the region over decades.

Remittances from the U.S. have become a major source of income in Central America. Guatemalans living in the U.S. sent about $10.5 billion back to Guatemala in 2019—that’s about 13 percent of the country’s GDP.

So that tells us that countries in Central America with high rates of poverty and a low supply of jobs that pay a decent amount have become reliant on the wages that migrants can send back to help families who stay behind.

REICHARD: You wrote a bit about the families who stay behind. We don’t always hear as much about them.

DEAN: That’s right. I spoke with a missionary who lives and works in western Guatemala, and he described the hardship for families who say goodbye to a father or husband or other family members who head north. Even when those migrants are able to send money back and help improve life for their family in Guatemala, those families still suffer from losing the physical presence of a loved one. This missionary told me that he’s met young men who have said: I had what I needed materially while I was growing up, but I didn’t have a dad.

And I think this shows how complicated this picture can become: You can relieve at least some material poverty, but then see families suffering a kind of relational poverty. So there’s a lot going on when we talk about the starting point for migration.

REICHARD: There’s a lot of discussion right now about how the U.S. could help Central American countries improve their situation so that more people might be willing to stay in their home countries. But that’s not new, right?

DEAN: No, it’s not. You can trace discussions of foreign aid to Central America at least as far back as Presidents John F. Kennedy and Lyndon B. Johnson, and those efforts have continued over the last five or six decades.

As I was researching this story, I came across a U.S. government report outlining some of the problems in Central America driving migration. Those included “armed conflicts, economic hardships, human rights violations, natural disasters, and political instability.” Those all sound familiar, right? But when I looked at the date of that report it was written in 1989.

So these are long-standing challenges— and we should say that U.S. involvement in the region is a long, complex story as well—but it’s certainly a complicated history that doesn’t yield simple solutions.

REICHARD: Give us a quick review of how U.S. aid to the region works.

DEAN: The U.S. government aims to disperse most aid to nongovernmental organizations and civil service groups in the receiving nations. The idea is to try to avoid giving money directly to corrupt governments.

Congress appropriates the funds and then taps U.S. agencies to disperse the money. For example, United States Agency for International Development focuses on poverty alleviation, and the U.S. State Department focuses on initiatives related to security and violence.

REICHARD: What has been the outcome for those projects? Has the aid worked?

DEAN: It depends on who you ask, but the U.S. Government Accountability Office issued a report in 2019 that said U.S. government agencies had allocated $2.4 billion for projects in the Northern Triangle from 2013 to 2018. (The Northern Triangle is Guatemala, El Salvador, and Honduras.)

And the conclusion of the report was pretty inconclusive. It said: “Limited information is available about how U.S. assistance improved prosperity, governance, and security in the Northern Triangle.”

REICHARD: So what’s the biggest problem here: Poverty or violence?

DEAN: I’d say both. Not everyone in the Northern Triangle is living in imminent danger all the time, but there are plenty of places where it’s hard to separate the issue of poverty from the issue of security.

I’ll give you an example: A 2015 report by an investigative group called Insight Crime described a tightly managed extortion racket run by infamous gangs like Barrio 18 and MS-13 in Honduras.

On a small scale, these gangs will target corner markets and sometimes street vendors. A gang will demand a supposedly one-time fee from a business owner to operate safely in the neighborhood, but then that turns into weekly payments that can become difficult for a street vendor to afford.

On a bigger scale, this report described gang members operating wide-scale extortion of taxi and bus fleets in the capital city. A leader of an organized group of 80 buses said he was paying four different gangs for the supposed right to operate in the city without facing violence. An initial demand for payment can range from $3,000 to $13,000, and then that’s followed by weekly demands for payments of $300 to $700. The locals call this a war tax.

So you can see how maintaining a simple business or job could be difficult for at least a segment of Hondurans who sometimes decide it would be safer and more sustainable to flee.

REICHARD: Have there been any successes?

DEAN: There have been, and some of them have been notable. A couple of years ago I visited an organization in Honduras called Association for a More Just Society. That’s a Christian group that has received U.S. aid in the past for some of its projects.

A couple of their staff members joined a presidential commission in 2016 that was aimed at confronting massive corruption in the country’s police force. And they managed to eject 5,000 out of 13,000 officers from the ranks, including six out of nine generals. That’s a notable success, and it trickles down to neighborhoods where citizens are more willing to trust the police to help them, and where police can have more success in combating crime.

This organization has also worked to pair crime victims with attorneys who walk them through the process of testifying against gang members and other criminals who might otherwise expect impunity from terrified victims. This helps lower violence in targeted areas.

These are examples of real results, but they do take time and a lot of effort to have an effect on a larger scale.

REICHARD: What are the next steps with a new round of aid to the Northern Triangle?

DEAN: President Biden has proposed a $4 billion aid package for the region. That’s certainly going to push back from Republicans, but I think the president is going to face some challenges from Democrats as well. Sen. Patrick Leahy, a Democratic senator from Vermont, recently said: We have a long history of sending aid to this region without seeing long-lasting results.

So I think it’s going to be interesting to see how far the president’s own party is going to be willing to go to work on a problem that seems to have no real end in sight.