Washington Wednesday - No longer up for debate

WORLD Radio - Washington Wednesday - No longer up for debate

GOP drops out of longtime debate process, and Democrats kick Iowa to the curb 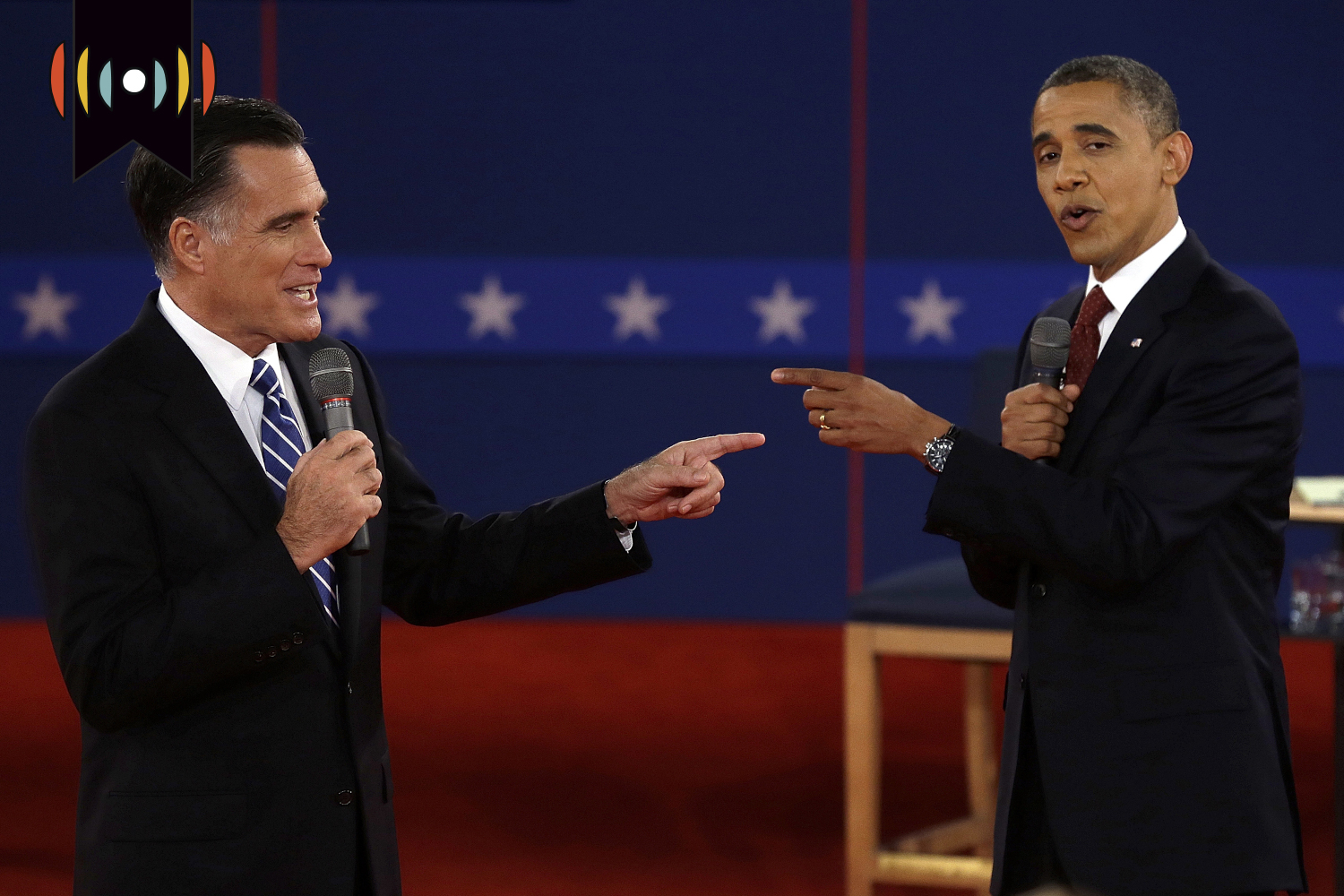 Both parties are making significant changes to the presidential election process.

Republicans are withdrawing from the Commission on Presidential Debates. RNC Chair Ronna McDaniel said Republicans see the commission as having a left-leaning bias and that GOP candidates are sometimes treated unfairly.

McDaniel listed a series of complaints, including this from a 2012 presidential debate. Listen for CNN moderator Candy Crowley inserting herself into the debate.

EICHER: Meantime, the Democratic National Committee stripped the state of Iowa of elite status. For many years, Iowa got to hold its nominating caucuses first before any votes are cast. That meant month after month of visits from presidential candidates competing for an early boost.

Iowa will now have to apply for the coveted spot along with other states.

The DNC says it will evaluate each state according to criteria—as it says—that reflect the party’s current values.

Here now to talk about it is Matt Klink. He’s a political strategist of 30 years and president of Klink Campaigns.

MATT KLINK, GUEST: Good morning! Thank you for having me.

REICHARD: Well, let's start with the Democratic National Committee's change. Talk a little bit more about the DNC's move here to strip Iowa of its first-in-the-nation status. Why are they doing this?

KLINK: So, look, the main problem that the Democratic Party has with selecting Iowa is that it's not a state that's really representative of the diversity that exists in America. Iowa is 90 percent white. And that is not the case of many or most of the states that Democrats have elected officials in. You look at the coastal states—California, Oregon, Washington, New York, Massachusetts—they're very diverse populations and I think that the Democrats want to have a state with a little more political power, that has the ability to steer the selection of a nominee that will better represent the party. And that Iowa, while a historical stop for any president, likely will not be the first stop for Democrats seeking future elected office of President of the United States.

REICHARD: Many people from both parties complained in the past that early primary and caucus states have an outsized influence over the process. Do you see Republicans making changes like this for their nomination process too?

KLINK: I think that both parties are going to look to tweak the nominations process, and one that is most advantageous to them selecting the candidate that best reflects that party's values. So, you know, Iowa and New Hampshire—being first and second—they’re small states, they're not particularly diverse states. And I think that those two factors that while they are rooted in history, both parties are now saying we're looking forward, not back, how can we select a candidate that is not only electable to the broadest possible majority, but also reflects the party's values. And Iowa and New Hampshire don't represent that. And, as I said, everything's on the table. I mean, the Democrats are looking at who goes first, the Republicans, and I know you want to get to this, the Republicans are talking about presidential debates. So, there's going to be a lot of changes afoot for 2024.

REICHARD: Let’s talk now about the Commission on Presidential Debates. For those who don’t know, Matt, explain what this commission is and how it came to govern the debate process.

KLINK: Yeah. So, it dates back to about the late 80s. And there were concerns. Everyone wants to see a person-to-person comparison in presidential debates. And they were always difficult to happen. So in the late 80s, they formed this Commission on Presidential Debates that had Republicans and Democrats involved, but they were more establishment, and then, staff and other members, and they would negotiate out the debates. And at the time it was great because you knew with certainty that you were going to get typically three presidential debates and one vice presidential debate. It established a normalcy. But the Republicans have consistently believed that the way that the debates have been handled - you know, Lester Holt asking Donald Trump far more complicated questions and difficult questions than Hillary Clinton, you know, Chris Wallace in the 2020 debates with Biden and Trump.

The example that you showed with Candy Crowley. She fact-checked Mitt Romney during a debate, and she was not even correct in doing it. That can change the entire outcome of the debate. And the Republican perspective in this is that this should be a debate between the candidates and the moderator should not be calling balls and strikes. They should just be there to maintain order.

The debate moderators have not traditionally been fair, and the commission making unilateral changes to structure, like, for example, they added the mute feature for the second presidential debate in 2020. That was not negotiated. So they made these unilateral changes. Ronna McDaniel, the RNC chair, had been in negotiations and finally they sent a letter, she did, saying that the Republicans were pulling out of the commission, and that they would just negotiate with the campaign on future debates.

REICHARD: Now, if the Commission on Presidential Debates is no longer calling the shots, how’s this going to work? How will future general election debates be done?

KLINK: So, on the positive side, it will force the campaigns to sit down and hack something out. That's on the good side. On the bad side is if you have a candidate that is up by a significant amount, or perceives that there is no benefit in debating, it's unlikely that there will be more than one debate, and it will probably be really, really early. Because the potential for damage is much less. And I think that that's the downside. The American public doesn't get multiple opportunities to judge the candidates against each other on the same stage. But for campaigns, you want to control as much as you possibly can. So if you're the Democratic campaign manager, you can make the requirements very strict. And, look, if a Republican is trailing in the polls, they'll do whatever they can to debate the Democrats so that – it just becomes more, the front runner gets to determine a lot more who and how and what is debated. So I think it has some benefits, but it also may come back to bite them. This is one of those unintended consequences that we talked about so often.

REICHARD: I have a sidebar question here Matt, not really about the process but about the candidates. President Biden says he does intend to run for reelection. But given his age and his poor approval ratings, do you think the party will pressure him to step aside and not run for a second term?

REICHARD: Final question, this time on the Republican side. Donald Trump is keeping himself relevant with his supporters and within the party. Do you think he’s keeping his options open, or do you think he’s already decided to run again?

KLINK: I’m hearing rumors on both sides that Donald Trump is definitely in and that Donald Trump likes being the kingmaker but he doesn't want to run for office again. And that’s exactly, I believe, what Donald Trump wants people to think. Donald Trump will be judged partially on his success rate in the 2022 elections. He has endorsed a number of candidates and I think that you'll see in early 2023, or maybe even on November 9, 2022, you'll see a lot of Republican candidates for the White House begin to say Trump was very effective, he still has a lot of influence, or he didn't do as well as he should have, his ability to predict and control has lessened, and you'll see more people running. So, I think that the jury is still out.

I mean, look, Donald Trump got 74+ million votes. Now, the downside of that is that the Democrats, in large part because of who Donald Trump is, they got 81 million votes. So, Donald Trump is a mixed bag, and I think you'll see a lot of candidates try to do what Glen Younkin did in Virginia, is that they will embrace the issues that are popular with the Republican base, but they will distance themselves from a president who is pretty toxic in terms of communications and message control, but is beloved because of his just direct and blunt stance. I think that will continue on in the party for sure. And that's not a bad thing. But again, the rhetoric was always Donald Trump's biggest problem. He was so harsh that he angered more people than he united.

REICHARD: Matt Klink’s been a political strategist for 30 years and is president of Klink Campaigns Matt, thanks so much!