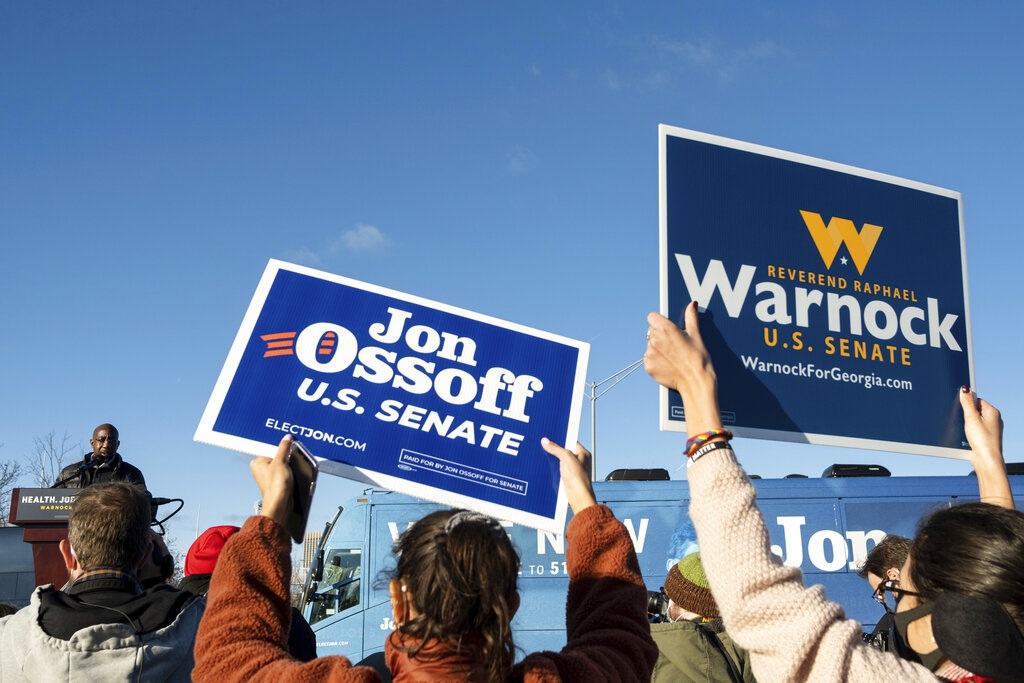 NICK EICHER, HOST: It’s Wednesday, the 30th of December, 2020. Glad to have you along for today’s edition of The World and Everything in It.

MARY REICHARD, HOST: And I’m Mary Reichard. First up, the battle for Senate control. It all comes down to Georgia!

EICHER: Yes, it does. On January 5th, Georgia voters will go to the polls to cast ballots in two Senate runoff races. The outcome of those races will determine who has the upper hand in the upper chamber. But the party that comes out on top will hold power by the slimmest of margins. And that will influence what happens in Washington—for good, or not so good—in the next four years.

REICHARD: Well, it is Washington Wednesday, and joining us now to talk about next week’s runoff is Jamie Dean. She’s WORLD’s national editor and main political reporter. Good morning, Jamie!

MARY REICHARD: Remind us how we got here, Jamie. Why are we having a contest two months after Election Day to decide who controls the Senate?

DEAN: Well, it comes down to a quirk in Georgia state law. The law says in a Senate or House race, a candidate must grab more than 50 percent of the vote to win. If no candidate reaches that mark, the top two vote-getters in each race head to run-offs.

REICHARD: And that’s what happened in Georgia?

DEAN: That’s right. All of the Senate candidates in Georgia fell short of an outright majority, so the state’s two Republican senators will face two Democratic opponents on January 5th.

Going into these run-offs, Republicans hold 50 seats in the U.S. Senate. Democrats hold 48. That means Democrats would need to pick up both seats in Georgia to bring the balance to a 50-50 tie. In that scenario, a Vice President Kamala Harris would break the tie, giving Democrats a slim majority.

REICHARD: How much of an advantage is a slim majority?

DEAN: It’s certainly an advantage. It would give President-elect Biden the ability to lock in cabinet officials and judicial appointments—including nominations to the Supreme Court. So that’s obviously a big advantage.

But a slim majority is also a disadvantage. Democrats wouldn’t have the 60-vote threshold to break a Republican filibuster on major legislation. And it would only take one Democratic defector to sink the party’s majority on some votes.

Joe Manchin, the Democratic senator from West Virginia, has already said he will not vote to end the Senate filibuster or to add justices to the Supreme Court. So at least some big changes appear to be off the table for now, either way.

REICHARD: Alright, let’s get to the candidates. Tell us about these races.

DEAN: OK, well, I’ll start with Republican Senator David Perdue. He is squaring off against an investigative journalist named Jon Ossoff. This isn’t the first time Ossoff has run for office. He narrowly lost a congressional race in 2018, but he’s now running in a tight race with Perdue. The latest polls show Perdue leading by .2 percent. So that certainly seems to be a toss-up.

In the other race, Republican Senator Kelly Loeffler is facing an Atlanta minister named Raphael Warnock. This is an interesting race because Loeffler should have an advantage here. She finished behind Warnock in November, but there was another Republican on the ticket alongside her. So without Republican Doug Collins in the race, most pundits expected Loeffler to pick up his supporters and pretty handily outpace Warnock in the run-off. But at this point, polls are showing that race as a tie.

REICHARD: Why do you think these races are so close?

DEAN: Well, it’s important to remember the presidential race was very close in Georgia. Biden did flip Georgia, but it was a thin margin. So it’s somewhat expected that the Senate races would turn out to be close too.

But there’s another dynamic going on here: President Trump is still contesting the outcome of the presidential election, and that puts Republican candidates in a tight spot: Do they support Trump in his protests, or do they focus on galvanizing Georgia Republicans to unite in an effort to defeat Biden?

They’ve done a little of both on the campaign trail, but they’re walking a very fine line. They’re probably wondering what will motivate Republican voters more—supporting Trump or holding onto to the Senate under a Biden presidency?

There’s also the matter of what’s going on in the Senate. Trump vetoed a defense spending bill that Loeffler and Perdue voted to pass. Now the senators have to decide whether they will vote to override the veto.

REICHARD: What about the Democratic candidates?

DEAN: Well, if money talks, it’s telling us that Ossoff and Warnock are in a pretty good position: They’ve raised $100 million each in the last two months. And I think that shows how much national attention this race is getting.

And outside groups are pouring lots of money into these races. The pro-life Susan B. Anthony List said it would spend at least $4 million in the races. And they’re also on the ground, going door to door talking to voters. Planned Parenthood planned to spend big too, but it’s also worth remembering that money alone doesn’t win elections. Planned Parenthood spent $800,000 on Ossoff’s first congressional race and he lost that contest.

REICHARD: You mentioned that Warnock is an Atlanta minister. Is Planned Parenthood backing him?

DEAN: They are backing him. The organization endorsed him back in May, and Warnock does support legalized abortion. In December, he tweeted, quote, “I am a pro-choice pastor”—end quote.

That raises another interesting dynamic in this race. Warnock is pastor of Ebenezer Baptist Church—that’s the church once led by Martin Luther King, Jr. One of King’s nieces, Alveda King, also lives in Atlanta, and she’s been vocal about her opposition to Warnock. She recently wrote: “Please don’t confuse the Warnock abortion agenda with the King family legacy!” So there are lots of layers going on in the races on both a local level and a national level.

REICHARD: What about ground game? You mentioned the Susan B Anthony list would be sending field organizers to knock on doors. Are other groups or candidates doing this?

DEAN: Yeah, it’s been an interesting shift for Democrats in these run-off races. Though Democrats won the White House, they saw they didn’t win as many congressional races as they hoped, and some attributed that to a lack of ground game during the campaign. Republicans knocked on a lot of doors all summer long.

Democrat Jim Clyburn, a longtime congressman from South Carolina, said we’ve got to start knocking on doors in Georgia. He also said Democrats were not going to win the Georgia run-offs if they ran them the way they ran the Biden campaign.

Ground game is tricky during a pandemic, when some folks might not be excited about strangers knocking on their doors. But I think Republican field workers showed there were ways to do it safely, and that these kind of boots on the ground still matter.

It will be interesting to see how much that plays into whoever wins these contests.

REICHARD: What is the key to winning as it comes down to the wire?

DEAN: I think it’s all about turnout. Turnout almost always drops in run-off contests, and it’s a real battle to get voters to tromp back out to the polls a couple of weeks after Christmas, or even to go through the process of mail-in balloting on a deadline.

So I think it’s going to come down to who has motivated voters the most.

Republicans are going to play what they hope is their trump card the night before the elections by having the president come down to Dalton, Georgia, and see if he can motivate voters in less urban areas to turn out in big numbers for the GOP. So we’ll be watching to see what Trump emphasizes at the end of a long campaign season, and whether it helps or hurts.

REICHARD: Jamie Dean is World’s national editor who writes about politics, among other topics! Thanks again, Jamie.