Washington Wednesday: How the Democrats plan to fight inflation

Democrats in the Senate have proposed legislation they believe will help beat back inflation Associated Press Photo/J. Scott Applewhite 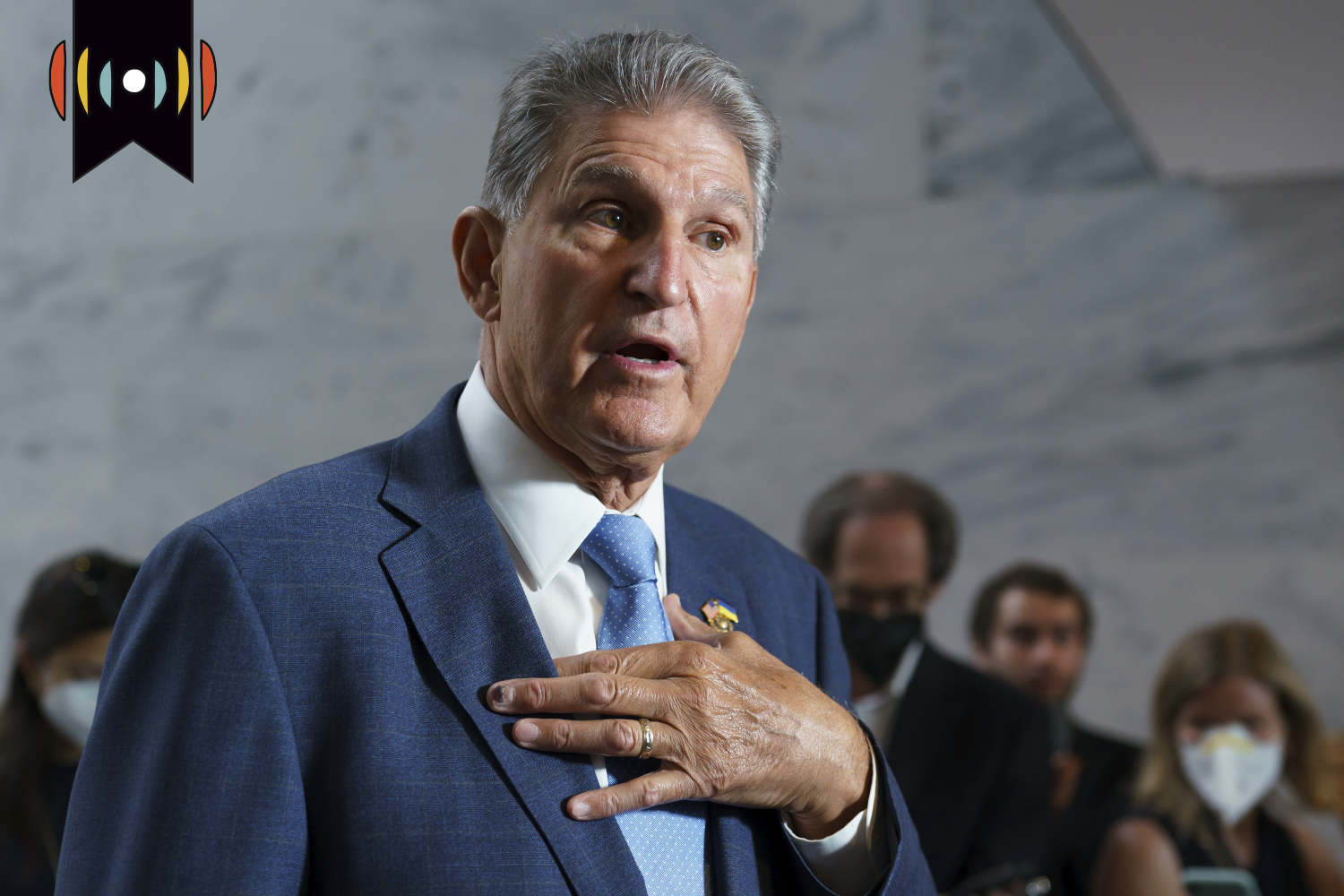 First up: the Democrats’ plan to fight inflation.

West Virginia Democrat Sen. Joe Manchin is the biggest swing vote in the Senate. He’s the most moderate member of that party.

In an evenly divided chamber, Democrats can get almost nothing done without his approval.

BROWN: But now they have his approval on a bill that would spend nearly three-quarters of a trillion dollars.

It would, among other things, rework the tax code and address climate change.

Democrats say the legislation will help beat back inflation. Republicans counter, it will only make the problem worse.

So what would this proposal do and what are the odds that it passes?

REICHARD: Joining us now James Capretta. He is a former associate director at the White House’s Office of Management and Budget. James, good morning!

REICHARD: Well first of all, James, just give us a high-level overview of what’s in this bill and what Democrats say it’s designed to do.

CAPRETTA: Well, it’s actually a pretty straightforward piece of legislation. As you know, it's a long bill, many pages, but it has a few major provisions. One is that it institutes a new corporate income tax rate minimum of 15 percent for certain larger corporations that have revenue above a certain threshold. So it's trying to say to corporate America that if your company is making a certain amount of money, forget all the other loopholes, there's going to be a minimum tax of at least 15 percent.

Then it says, we're going to give the IRS a bunch of money—quite a bit of money, tens of billions of dollars—in the coming years to help them perform and do greater monitoring of income tax payments, especially by higher income individuals. So they're trying to make sure compliance is higher with existing tax law by giving the IRS much more resources than they currently get.

So those are the two big provisions on the tax side. There's one more having to do with carried interest, which is something that is smaller in terms of its revenue effect, but which is controversial just because of its effect on the financial services industry in particular. Some people view it as a loophole closer, some people view it as a tax increase. I guess that depends on your perspective. But in terms of its revenue consequence, it’s a much smaller amount of money.

On the other side, there is a major provision associated with prescription drugs. Basically, this new bill would give Medicare and the government the authority to get much more involved with certain higher cost drugs in terms of setting the price for them. Now they call it a negotiation, but candidly, when the government gets involved with the things, they say it's a negotiation, but there's always a backup price that would be paid if they fail to come to an agreement. And that could end up being very well the price that does get paid, which is substantially below what these pharmaceutical companies would likely receive in the absence of this new bill. So they're basically lowering the price that Medicare will pay for certain numbers of drugs.

And then finally, they would spend some money by extending some subsidies on the Affordable Care Act exchanges, that is for premiums for enrolling into insurance, health insurance for people with certain income levels. Those were bumped up in 2021 and 2022. And they want to extend that for another three years, through 2025.

And then finally, the big one, the one that they talked about quite a bit and is a major focus and why they're very pressed and want to get this bill done is the provisions having to do with energy transformation. Basically, trying to subsidize the movement of energy production in the United States away from fossil fuels to renewable sources of energy. So that's a major, major push and really like $300-some billion in new spending over the next decade is associated with that part of the bill.

So when you net it all out, it's about potentially—and this is what Senator Manchin insisted on—about $300 billion potentially in deficit reduction. But that presumes that the subsidies for the health insurance end after 2025, which if you do them for that many years, five years, the likelihood they ever end is near zero. So they will get maintained. And then it also assumes a repeal of a regulation, which isn't going to happen anyway, which on paper saves about $120 billion. So there's a little bit of—as usual in these kinds of measures—some gaming and some gimmicks. But anyway, that's by and large what's in the bill.

REICHARD: The nonpartisan Joint Committee on Taxation — “JCT” for short — put together an analysis of the bill showing that most Americans will have to pay higher taxes if it passes. And I know during the 2020 campaign President Biden said, candidate Biden said, no new taxes on anybody earning less than $400,000 per year. So what explanation is offered for this new conclusion that everybody’s going to have to pay more taxes?

CAPRETTA: Well, when you implement a tax on corporations of a minimum of 15 percent, on paper it looks like or at least in an accounting sense, the first payer is the company itself. They send more money to the IRS if you impose this tax. But truthfully, they pass it on in various ways. They may pass it on to shareholders, who are mostly higher income people, but not entirely. Or they may pass on some of it in the form of less hiring or potentially lower wages. This is what the JCT assumes. Tthey assume some of that will get passed on to the various categories of people. And some of it will end up hitting the people who are below $400,000 a year in income. So, my view of this is that politicians make all kinds of pledges and they often are stretching it a little bit. And this one stretched it a little bit with President Biden, saying he wasn't going to raise taxes on this income category, and this tax would for sure. But on the other hand, I think trying to say that this is a big tax increase on working Americans is probably not accurate either. That, yeah, there'll be some effect on working Americans, but it's relatively minor in the scheme of things relative to the size of the bill and the taxes that will be paid by other people.

REICHARD: What are the odds then that this bill reaches President Biden’s desk? Does this bill need to pass the 60 vote threshold to avoid a filibuster, or is this something Democrats could pass just with a simple majority?

CAPRETTA: Well, they’ve written it to be passed with a simple majority. It will never make it to the president if it had to get 10 Republican votes, which it would if it needed 60 votes. So they're passing this just with Democratic votes in the Senate. And then a very party-line vote in the House for sure. So they're banking on this passing under the rules of budget procedures called reconciliation, where they only need 50 votes and they're counting on that. And what are the odds of that happening? This story has been lots of ups and downs and twists and turns, but this is so important to the Democratic Party, so important to the president, it's hard to imagine it not getting through the Congress eventually.

REICHARD: Sen. Joe Manchin, as we mentioned, is probably the most moderate member of the Democrats in the Senate, at least. What won him over on this? He wasn’t sold on this before. So why is he now?

CAPRETTA: Well, you kind of have to look at it from his perspective. I think he actually really changed the bill quite a bit. I mean, the bill is no longer a trillion dollar bill. It's basically a hundreds of billions of dollars bill instead of trillions of dollars. And the only spending in the bill really is associated with the climate change provisions, which he says he always supported. He may have moved a little bit in part because he wanted to have some of it in his jurisdiction, and he got some side deals that allows benefits for industries in his own state. So I think that was a big part of how we got to Yes. And to be honest about it, he always supported the prescription drug provisions and raising taxes on corporations. So this isn’t entirely inconsistent with where he's been all year to be honest with you. And I would give him a fair amount of credit for moving the bill pretty far away from where it was originally, much closer to a set of principles that he's articulated pretty consistently.

REICHARD: We’ve been talking to James Capretta. He is a Senior Fellow and Milton Friedman Chair at the American Enterprise Institute. James, thanks so much!