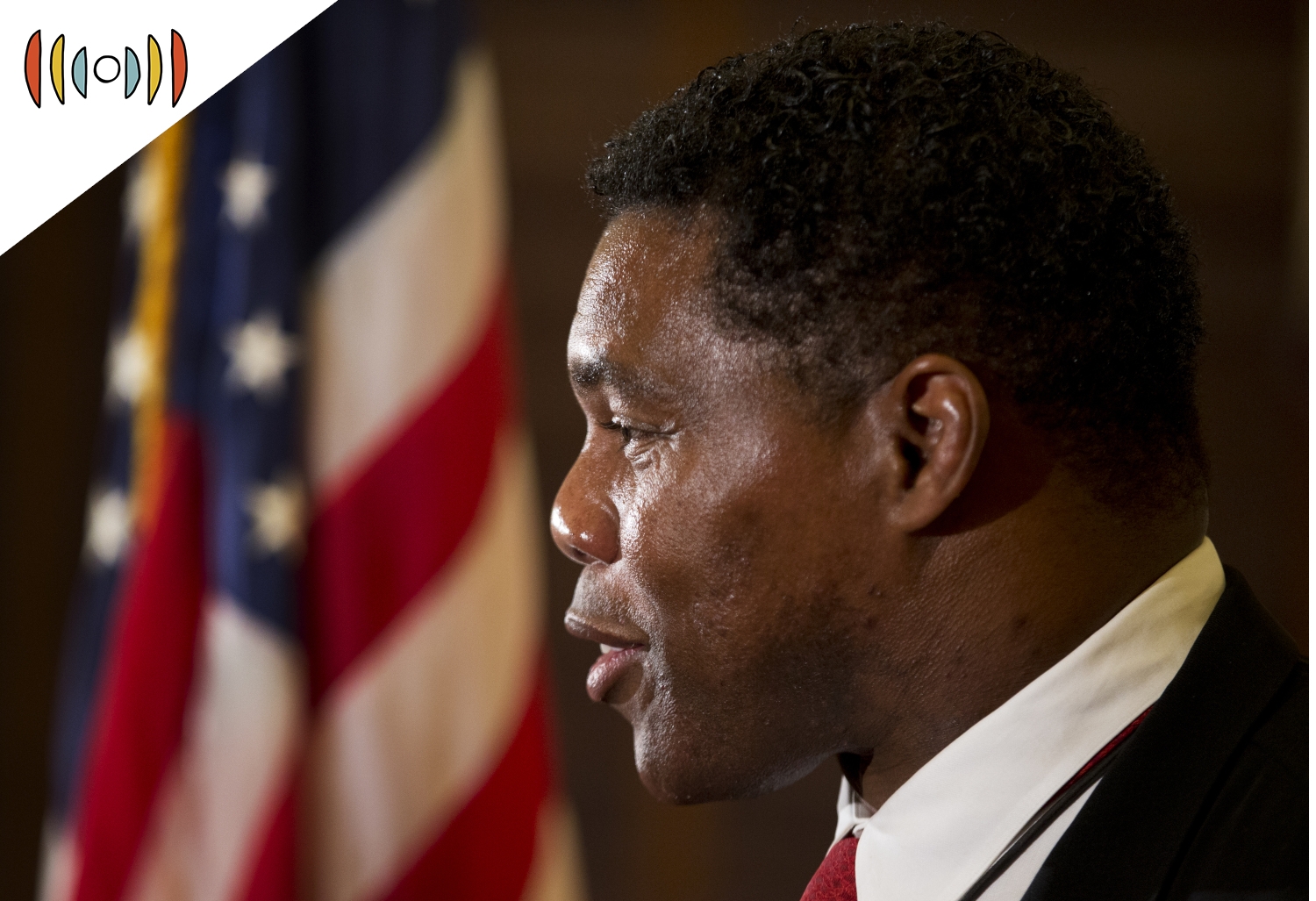 Republicans could be drawing up a play to shake up the battle for control of the Senate by adding a little star power in Georgia.

WALKER: I’m not an actor, a singer, or a politician. I’m Herschel Walker.

Walker has lived in Texas for years, but has maintained a home in Georgia, where he was born and raised, and where he went to college. As a running back for the

University of Georgia, Walker won the hearts of UGA fans by leading the team to a national championship in 1980. He also won college football’s highest honor, the Heisman Trophy, two years later.

EICHER: Walker has a decades-long friendship with Donald Trump. The former president has been urging him to challenge incumbent Democratic Sen. Raphael Warnock in Georgia next year.

And in recent weeks, Walker has started to sound a lot more like a future candidate.

In a statement, he said—quoting here, “Georgia is my home — I love Georgia, and I love this country. I believe we need fighters to step forward and help save both.”

And he told Jakib Media Sports:

WALKER: When I say I’m taking things very serious, I have to see if that’s what the Lord is asking me to do, and if that is it, I’m going out to win. I’m going out to do as much as I can for the state of Georgia and for our country.

He said he’ll make a decision soon. But Trump said last week that Walker has already made up his mind. He said Walker told him that he will challenge Warnock next year.

REICHARD: Joining us now to discuss Herschel Walker’s potential impact on the battle for the Senate — and to update us on the state of the race in general — is Kyle Kondik. He is director of communications at the University of Virginia’s Center for Politics. Kyle, good morning!

REICHARD: Well let’s start with where things stand right now, without Walker on the ballot in Georgia. How are you sizing up next year’s Senate battle in general as we speak today?

KONDIK: The usual pattern is for the president's party to struggle in midterms. That doesn't always happen, but it often does. However, you know, with the house, you know, all 435 seats are up every two years. But the Senate, there's a different battlefield every two years. And the Republicans are actually defending more seats, 20 of the seats up this cycle. The Democrats are only defending 14, and there are some vulnerable seats on both sides. The Republicans are defending open seats in Pennsylvania, North Carolina, which are two swing states. Republicans are also defending Wisconsin where Ron Johnson may or may not run for a third term in the Senate. There's an open seat in Ohio. Marco Rubio in Florida. You know, some of these seats probably won't be all that vulnerable in the end, but a few of them might be. And then the Democrats are defending incumbents in New Hampshire and Georgia, Arizona, Nevada, all those are competitive states.

So again, there's just roughly even a number of competitive states on both sides. And, you know, if you look at the states that the Republicans are naturally going to target, they don't have any seats to target in states that Donald Trump won in 2020. But they do have some in states that were very close for the president, including Georgia, which of course was decided by less than half a percentage point. Arizona's in the same boat. And, you know, it's a little odd in recent history that, you know, Georgia had become such a Republican state in recent years. But Democrats, of course, won not just one but both of the states and Senate seats in January 2021 special elections. Raphael Warnock won a special election, and so he has to be on the ballot again in 2022. And Republicans are trying to figure out who should run against him.

REICHARD: Okay, those are senate races to watch. Let’s talk about Georgia’s incumbent. How vulnerable or how strong is Warnock heading into 2022?

KONDIK: Look, I think Warnock ran a pretty impressive race in in the context of the 2020 election, and I was kind of surprised ultimately, that he ended up winning and also that Jon Ossoff ended up winning the other Senate seat. You know, I'd say Warnock is not really a moderate. I mean, he's very much of a kind of a mainstream liberal Democrat. There is some evidence that suggests that in a state that has a very significant black population and a black population that is pretty overwhelmingly Democratic, that having a black candidate on the ballot in the case of Warnock might be a little bit helpful in terms of turnout, for the Democrats. And so I think Warnock’s a good candidate, but I also don't think he's unbeatable or anything like that. And, you know, if there is a turn against Democrats more broadly across the country. And again, it's not uncommon to see that in midterm, you know, you could see Warnock being pretty heavily endangered in this kind of environment.

REICHARD: If Walker does indeed decide to run, is his star power and Trump’s endorsement all he needs to win over Republican voters or will he have more work to do?

KONDIK: You know, there will be competition in the primary, although there are some notable candidates who seem like they're not going to run, if in fact, Herschel Walker does run. One of them is Kelly Loeffler who held this seat was appointed to this seat and ended up losing to Warnock in the runoff in January. And the former president's endorsement is not -- doesn't always guarantee victory, but it often does, I think, in a Republican primary situation. And so you'd have to look at him as a favorite I think to win the nomination, then you just have to see how things would shake out.

And, you know, what's interesting about a potential Walker candidacy is that this would be the first time for him running for anything, and so on one hand being a political outsider can be helpful in that you don't have, you know, he doesn't have a record in the state legislature, in Congress that he needs to defend. He hasn't had to take difficult votes on things. He can kind of craft his own political persona the way that he wants. On the other hand, we don't know how he'll perform as a candidate. We don't know how he'll handle the scrutiny. He's going to be subjected to a kind of vetting by his opponents of his past. And so there are things that probably will come out that haven't haven't necessarily been aired before. So, you know, again, we just don't know, necessarily, how he would perform. And we'll have to see if and when Walker decides to run.

REICHARD: You mention Walker as an outsider. We know his primary residence hasn’t been in Georgia for some time. He’ll take some heat for that I’m sure. Do you think that will matter? Will that be a problem for him?

KONDIK: Residency does sometimes come up. And you know, sometimes it could come out. I mean, I think specifically, residency seems to matter in a scenario that's not really like what Walker's dealing with, but when you maybe have an incumbent member of the House and Senate who has been in Washington for a really long time, to the point where you can make the case that they don't actually really live, you know, “back home,” that they they essentially live in Washington. I don't think Walker necessarily faces that kind of problem. But, you know, I do think that his rivals will certainly bring up the fact that he is, you know, he's only sort of coming back to Georgia to run for office, if in fact, he does it.

REICHARD: You mentioned a large percentage of Georgia voters are African American and those votes typically go heavily for Democratic candidates. How much do you think Walker might change that dynamic in Georgia?

KONDIK: Look, I mean, I think that if Walker performs really well as a candidate, you could imagine him as a black candidate, maybe being able to cut a little bit into Warnock's big margin with black voters in Georgia. And look, I mean, if you're a Republican, and you can, you know, if you could just chip a couple, you know, a few percentage points off of the Democrats’ huge margin, with black voters, that's probably good enough to win. And so that that's the potential for Walker is that as a black Republican running against a black Democrat, that maybe he can again, sort of chip away at Warnock's big lead with black Democrats or with black voters in the election. Warnock is gonna win black voters overall by a very heavy margin, but the size of that margin matters. And, you know, part of the other problem for Republicans in the Senate runoffs earlier this year was that the Democratic turnout was just a little bit better. And in some parts of the state, particularly kind of whiter, rural parts of the state, like northern Georgia, you know, turnout was good, but not good enough. And so if maybe Walker as a candidate with the full-throated endorsement of Trump, maybe he's able to generate a little bit better turnout amongst Republicans, you know, Democratic turnout, maybe dips a little bit or he cuts slightly into the huge Democratic edge with black voters, then all of a sudden, that's what a winning candidacy would look like. So again, if you're looking at, you know, what does the optimal outcome for Walker look like? Well, obviously, it'd be winning and winning in such a way that he gets good turnout from white Republicans, and also is able to grab a little bit more of the black vote than Republicans usually do.

REICHARD: Before I let you go, Kyle, update us very briefly on the battle for control of the House. How is that shaping up right now?

KONDIK: Look, there's been a delay in the data that's used to create the new House districts. So every state with more than one house district will have to draw new districts based on the 2020 U.S. Census data. That data should be delivered to the States by about mid-August, and then we'll start to see the state's redistricting in earnest. Most of us expect that the Republicans will probably come out a little bit ahead in that process compared to the Democrats. So there are a lot of moving pieces. Between that and history that generally suggests that the president's party loses ground in the House, the Republicans only need to net five seats to win the House, so I think the Republicans are in pretty good shape to win the house although nothing is guaranteed.

REICHARD: Kyle Kondik with the University of Virginia’s Center for Politics has been our guest. Kyle, thanks so much!