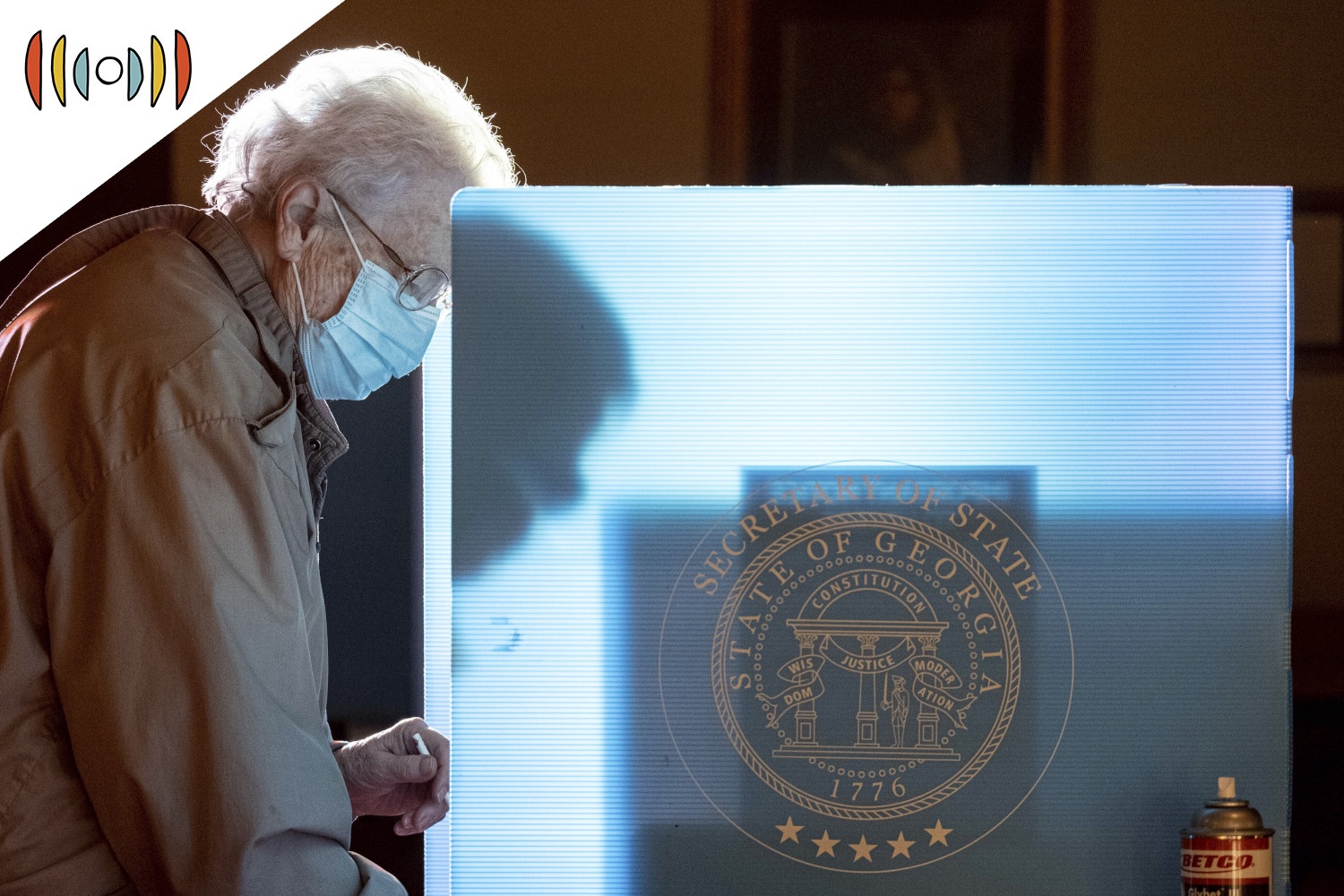 PAUL BUTLER, HOST: And I’m Paul Butler. First up, election laws and who controls them.

Democrats on Capitol Hill are again calling for new legislation to shift more power over election laws from the states to the federal government.

Several Republican-led states passed laws this year to tighten up voting rules. That in the wake of the 2020 election that saw novel accommodations to account for precautions around the novel coronavirus.

REICHARD: Republicans said there were too many ways for bad actors to exploit the system. So they proposed new rules to ensure the security of future elections.

HARRIS: This all is designed, I believe, to make it hard for you to vote so that you don’t vote.

In other words, the administration charges that the laws are designed particularly to discourage minorities from voting.

The war over voting laws is raging right now in Texas—where many Democratic lawmakers fled the state to stall new legislation.

BUTLER: But the battle began in the state of Georgia, where GOP Gov. Brian Kemp signed new election rules into law back in March.

Since then, the Department of Justice filed a lawsuit accusing Republicans of violating the civil rights of Georgia voters.

REICHARD: And here to speak with us now is the Governor of Georgia Brian Kemp. Governor, good morning!

BRIAN KEMP, GUEST: Hey, great to be on with you. Thank you.

REICHARD: Governor, when you found out that the Justice Department was suing your state over the elections bill you signed into law earlier this year, how did you react?

KEMP: Well, it wasn't too surprising, quite honestly, which is kind of sad. But also it makes me mad. I mean, it's very disappointing that the Biden administration is politicized and the Justice Department, especially, with as many biggest issues as there are around the country with increased violence, shootings and other things in a lot of our major cities around the country, the crisis on the border, and a lot of things going on, and they're gonna start targeting states over a process that we've done for decades of deciding what our election laws are. It's just kind of sad, but it also makes you mad, but at the end of the day, it's also not very surprising.

REICHARD: What’s the status of that lawsuit and might it affect elections in your state next year?

KEMP: Well, we'll see how it plays out. And it's not just the Justice Department that’s suing us. There was liberal groups that sued us the night of or the day after I signed the bill, there's, you know, six or seven lawsuits. You know, I've dealt with that for over a decade now fighting the Obama Justice Department, fighting a lot of these liberal activist groups that have always sued Georgia over our election laws. Had to sue the Obama Justice Department to get our citizenship check when you register to vote. I've been in court twice—and won–defending our photo ID requirement when we vote in person in Georgia. And we're now going to have that requirement for absentee ballots, so I look forward to going 3-and-0 against the Justice Department on that one. So this is really nothing surprising for us. It's the left’s playbook. But people need to realize two things: Number one, they need to realize that we're gonna stand up and fight tooth and nail because we have the truth on our side that this bill makes it easy to vote and hard to cheat. But number two is, you know, this administration and activists are coming after you and your ballgame and your way of life and what you believe in and your state next, and that should scare people across the country, in my opinion.

REICHARD: Democrats are pushing to shift more control over election law from states to Washington. What is your response to what they’re proposing?

KEMP: Well, this is their response to that failing. I mean, they couldn't get HR-1 S-1 passed through the Congress, which is an unconstitutional federal mandate of elections, which thankfully, it didn't pass and the Republicans stuck together along with some other people up there and said, we're not going to do that. And I hope that they'll hold on that. But when that failed their next step to just appease the activist base of the party was to start suing states and they started with us, which is ridiculous when you think about, you know, we have early voting in Georgia. And Delaware—President Biden's own home state—until this last legislative session, they didn't even have it in their law. They haven't used it in their elections, and they will in the future, but they still have less days than we do. You have a lot of these other Democratic led states that you have to have an excuse to be able to vote by mail, absentee by mail. You don't have to have an excuse in Georgia. Our bill actually added days and you could vote on the weekend if you would like to and the county opts into that. So really, what they're saying is quite honestly, just a bunch of lies and a bunch of rhetoric for a political agenda. It has nothing to do with the truth and the way the process works at the state level. But we're willing to stand up and fight for that, however long it takes.

REICHARD: Well you mentioned voter ID, and I’d like to ask you about that.

Your state ditched the so-called signature-matching process for ballots and now requires some form of voter identification for mail-in ballots. Democrats say that will place an unequal burden on poor and minority voters who may be less likely to have a state issued ID or may have a harder time meeting the new requirements. Governor, I know you believe that is not the case. Why not?

KEMP: Well, we know that's not the case. And we also know that the vast majority of Georgians support the photo ID or the voter ID requirement for voting absentee in this new piece of legislation. We've been using voter IDs here in Georgia since the mid-2000s. We'll give voters one for free if they don't have one. You can get them at your drivers service offices and you can get them at your county registrar's office and so this is really a hollow argument on their point. What we saw in the last election was something that we need to address. And that's the mechanics of the election process. When you have five to 10% of our population or voting population voting absentee by mail, a signature match process, even though it's antiquated at times, works fairly well. But when you have 35 to 40%, the locals were overwhelmed. And I've talked to them and said, you know, would it make it easier if you're verifying a number versus someone’s signature? Would that get the process to go quicker? Would it be more secure? And the ones I talked to said absolutely, that would be helpful. And so that's what we put into the law. And most people support that. You have to have a photo ID to cash checks and buy cigarettes and alcohol and get on an airplane and get government benefits, to get in the Capitol building and other things in Washington DC. Most people have no issues with that; they actually support that because they want their vote to be secure. They want it to be counted. And that's the way it should be. But elections should also be accessible and they are in Georgia.

REICHARD: Are Democrats correct in saying that election fraud claims were the impetus for these voting changes?

KEMP: Well, I wouldn't think it is. I mean, it's certainly not to me. It's not you know, we have plenty of precedent in the state of Georgia—and I've been through this myself even long before I was governor, doing housekeeping election bills after big elections. Normally, after presidential year, or whenever we got new voting equipment, we would go in and learn from the last election, fix any mechanical problems that we have. And I think if you look at how our legislature went about this, Speaker Ralston in the House set up a committee to start looking at these issues that Georgians faced, started talking to local elections officials. We took recommendations from the Association of County Commissioners of Georgia, because it’s their elections office that are actually running the elections on Election Day, and we took some ideas from them and also the legislators that were hearing from constituents. So, you know, you might have some that are doing things because of what they think may happen during the elections, but the final product, a bill that actually passed that I signed, addresses the mechanical issues that we saw in the last election.

REICHARD: Let me ask you about Major League Baseball’s decision to move the All-Star game from Atlanta to Denver this year. MLB got plenty of pushback for its foray into politics.
Have league officials budged at all in the wake of that pushback? Any indication that they might bring the All-Star game back to Atlanta in the near future?

KEMP: Well, we’ll see what they decide to do in the future. Honestly, I'm not too worried about what all is after what they've done. I think a lot of people like myself are very frustrated with those actions. People are tired of the woke cancel culture. They're tired of people not standing up to these activists and the politicians like, quite honestly, Joe Biden, Vice President Harris, the U.S. Justice Department and other activists that are suing us and saying you're wrong, the truth is on our side, we're not going to waver. We're not going to bend and we're not going to do that in Georgia. And I think Major League Baseball made a terrible decision to politicize sports. I think you saw in their TV ratings for the All Star game, it was as low as anybody can remember in recent memory from what my understanding is. And I think their patrons are speaking with their wallet. But that being said, you know, it's a great sport, and it's just really disappointing that they did that and hopefully they learn from that lesson.

REICHARD: Georgia Gov. Brian Kemp has been our guest. Governor, thanks for joining us!

KEMP: Thank you. Have a great day.