The prices for grades of gasoline are shown on a sign outside a Conoco station Friday, Nov. 5, 2021, in Denver. David Zalubowski/Associated Press Photo 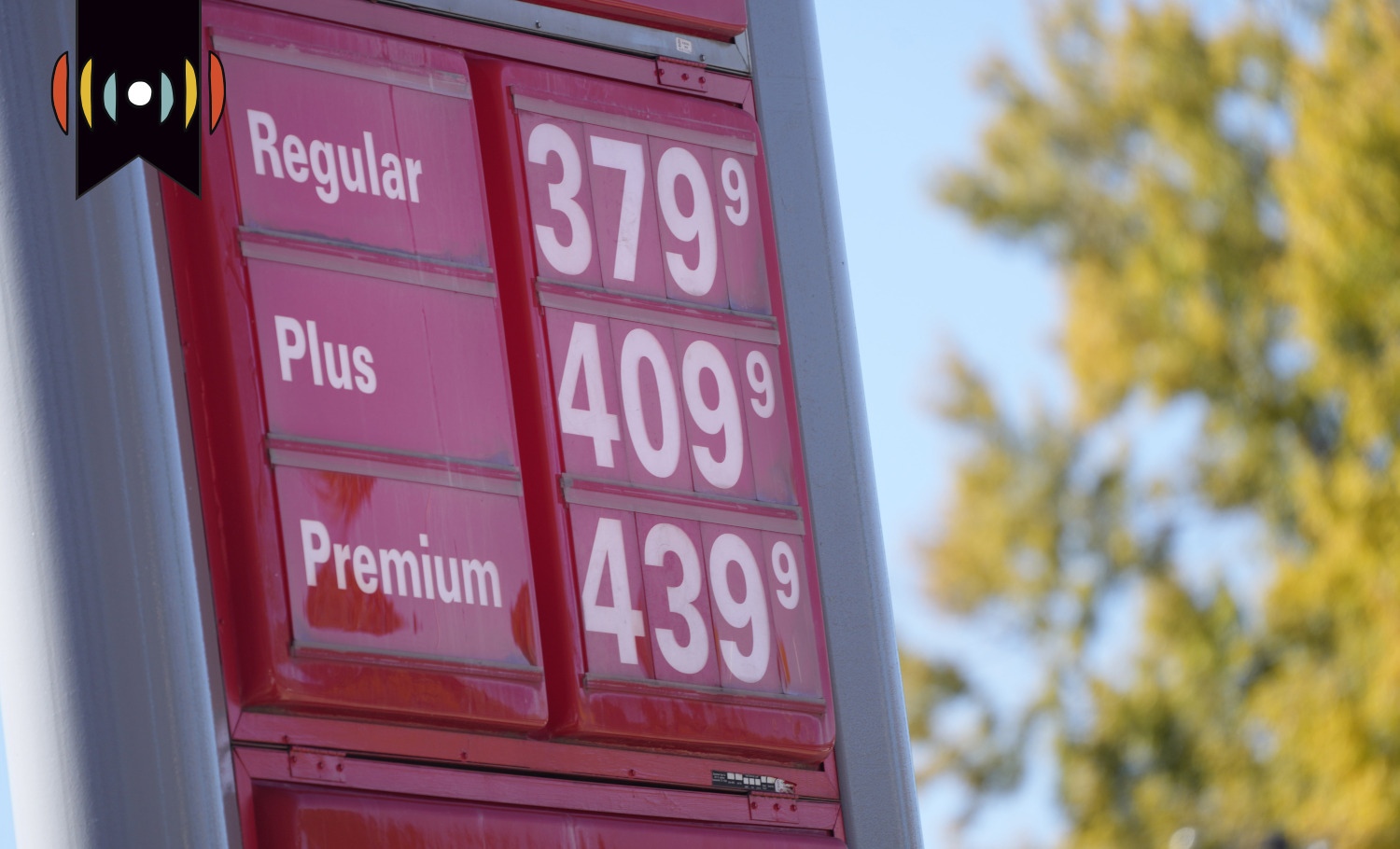 You’re listening to The World and Everything in It and we are so glad to have you along today. Good morning, I’m Mary Reichard.

Prices are soaring pretty much across the board in the United States as inflation continues to reach further into Americans’ pockets. But that is especially true when it comes to energy costs.

Fuel prices rose more than 12 percent in October. The average cost for a gallon of regular unleaded now tops $3.41.

GRANHOLM: The president is all over this. He’s looking at whatever short-term tools he has to be able to relieve the pain the people may be feeling at the pump.

But it’s not just gas prices. Energy costs rose across the board almost 5 percent last month and are up 20 percent over the past year, with no end in sight to the price surge.

REICHARD: So what’s behind the rising energy prices and what can the Biden administration do about it?

Joining us now to help answer those questions is Katie Tubb. She is a senior policy analyst for energy and environmental issues with The Heritage Foundation. Good morning, Katie!

REICHARD: Well, we talked to you a couple of months back about gas prices. And they haven’t gotten any better since then!

TUBB: Well, in some ways the story isn't entirely different. We're still seeing a robust recovery from the pandemic, both in terms of consumer demand and suppliers getting operations back on track. And so just an example of what that looks like, you know, world consumption for oil has far outpaced demand. And as far as the Energy Information Administration projects, that's going to continue for the next year or two as these supply and demand aspects of these global markets continue to correct after what was a very difficult year for both suppliers and consumers. But I think we would be remiss if we said it was only energy markets recovering. I think there is a role for policy here. And certainly the Biden administration has not welcomed the return of coal, oil, and natural gas, which are resources Americans rely on heavily for their total energy needs.

REICHARD: Obviously, the Biden administration places a higher priority on environmental factors than the prior administration. How much do the president’s policies factor into this vs things that are outside of his control?

TUBB: Well, I think you're right to caveat by saying that there are circumstances outside of a president's control. That said, you know, President Biden has not allowed any coal, oil, or natural gas leasing activity on federal lands. One of his first decisions was to cancel the Keystone XL Pipeline presidential permit from Canada and the United States that would have brought Canadian oil into U.S. markets. And he's continuing to push a regulatory agenda that basically targets every aspect of coal, oil, and natural gas exploration, production, and even use it at this point, whether we're talking about the actual processes of producing energy, or we're talking about financial markets and raising capital for these businesses. So I do think that has an impact as far as what people are willing to invest in and continue pursuing. And those decisions have consequences months and years out ahead of us. But I think another useful contrast point is what's happening in Europe. You know, Europe has made policy decisions years ago, not to pursue robust energy exploration and production. And I think they're reaping the consequences for that now. And so that's, I think, a good lesson learned for the United States to watch what is happening in Europe as a result of policies that were made years ago, and I think they're much less resilient because of those policy decisions.

REICHARD: The Biden administration has said tapping into the strategic petroleum reserve is on the table. That is of course the nation’s reserve supply of oil. It’s intended for emergency situations. They could tap into that to help lower prices. Good idea, bad idea? Do you think that would help?

TUBB: Hmm, not a good idea. And the reason why is, you know, the purpose of the Strategic Petroleum Reserve is to pitch into a crisis situation where there's low supply. And I don't think that's exactly where we are. And I think the reason it's a bad idea to pump out SPR resources at this point is because we have a situation where supply and demand are trying to get back on track and so the communication tool between supply and demand is prices. The higher prices are, the more incentive there is to increase supply. And so it's important that those prices continue to communicate to suppliers to work hard to get supply online. If the administration were to short circuit that communication, between supply and demand, I think what we'd see is very slight relief probably a month from now. But I think it would have long term damage as far as harming supply in the U.S. to the long-term goal of what we want is a stable oil market. So I think it's a shortcut and the point that the administration would be missing, if they go that route, is all of the other things this administration is doing to harm supply in the long term. So to me, it's a shortcut that could do far more harm than good in the long term.

REICHARD: Some analysts suggest that if the United States were to tap into its reserve, OPEC might just cut oil production to match the release from the reserve. Do you think that’s a concern?

TUBB: Yeah, to me, the SPR has become a political tool to bail out a president when he feels pressure over energy prices. And I don't think OPEC is blind to the pressure the Biden administration is under and I don't think they have too much concern with helping him out. So, to me, the Biden administration should pivot not towards SPR—because, again, I think that's a shortcut—but move to what would be a more resilient and robust energy sector United States and that's pulling back a lot of these regulations that I think are creating considerable risk for the industry

REICHARD: The Biden administration was recently taking a look at shutting down the Line 5 pipeline, which runs from Canada through Michigan. Officials now say they are no longer considering that. What effect would that have if they did shut down that pipeline?

TUBB: Well, I'm not ready to say that the question is off the table. The administration said they're looking at it, so I think we should hold our breath a little bit longer. But that pipeline is important for bringing fuel propane, which is used for heating, all different kinds of oil products through that pipeline to the Midwest and also to Canada and so there are significant ramifications for shutting that pipeline down. I would also say that, you know, part of the reason people are advocating it be shut down is environmental concerns. And I think reality is exactly the opposite, that this pipeline has not had any consequences to the environment and to shut it down would not be to stop use of those products, those oil products, it would just transfer the transportation of those products, by other means, whether we're talking about real or trucking, and that those have their own environmental implications. So I think there are -- it's a tug of war between what the administration would probably want to do and what the energy realities of the situation are.

REICHARD: Is there anything else you think the public should know?

TUBB: You know, I think I find this a very useful time in the sense of it is focusing our attention on what matters, that affordable, reliable energy does matter and it's not just some abstract idea. This is about heating our homes, it's about being able to -- well, how do I want to put this -- To me, it's everything about American well-being and our way of life. And that's not something that we should trifle about. And so, to me, energy price increases focus our attention on why that matters, why affordable, reliable energy matters, why it's a problem to organize our grid, for example, around arbitrary political slogans like 30% renewables by 2030. There are consequences for policies like that. So, to me, this is a time to focus our attention on good policy, and also to be very thankful for the energy that we do have, thankful that when we put a plug into the wall, our machine works, or the light switch turns on, our homes are warming. That's not the case for everyone around the world. So we have a lot to be thankful for and we have a lot of work to keep doing to make that a situation we can look forward to in the future.

REICHARD: Katie Tubb is energy and environmental analyst for the Heritage Foundation. Katie, thanks so much!

TUBB: Thanks very much for having me on.