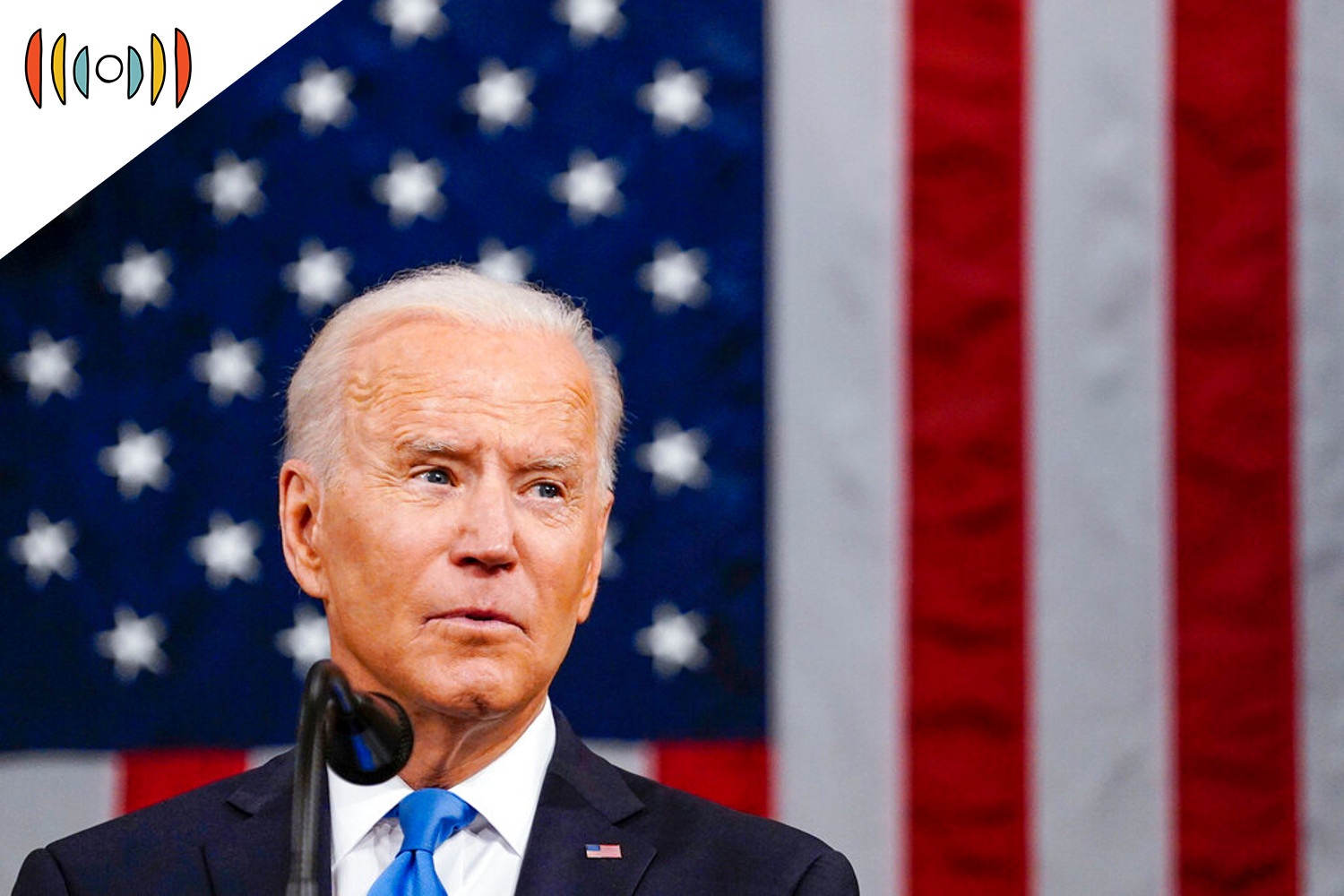 After signing the near $2 trillion dollar American Rescue Plan into law in March, the president unveiled another $2 trillion spending package. This one centered on infrastructure and many other things.

And two weeks ago, before a joint session of Congress, the president told lawmakers he’s just getting warmed up.

BIDEN: We can’t stop now. We’re in competition with China and other countries to win the 21st century.

The president unveiled another near $2 trillion dollar spending package, which he calls the American Families Plan.

He has proposed paying for the spending with tax increases, he says, on wealthy Americans.

REICHARD: Joining us now with insight on the president’s proposal is Professor Jeffrey Miron. He is an economist with the Cato Institute and teaches the subject at Harvard. Professor, good morning!

MIRON: Good morning. Thanks for having me.

REICHARD: Well, to start with, let’s run though what’s in the proposal. It would extend child tax credits passed under the American Rescue Plan back in March, correct?

REICHARD: It would also pay for child care and family leave. What can you tell us about that?

MIRON: Let's start with the family leave. That's sort of a significant expansion of federal intervention in the family medical leave area because it's actually providing subsidies to help pay for that. The childcare and pre-K is, again, introducing the federal government in areas where it's had relatively limited intervention. So far, the pre-kindergarten in particular, is offering to pay for anyone to be able to send their children to pre-kindergarten, which is a very significant expansion of the government's role.

REICHARD: Talk about how is that fair, when it's across the board, in other words, wealthy families could afford to pay for their own preschool. And yet here we have a bill that's going to apply money to all families?

But as you indicate, it's kind of crazy to be paying for pre-kindergarten for middle and upper income families, because they have the resources to do that. They are mainly already doing that in one way or another. Some are using a childcare services outside their home, or hiring nannies, or whatever. Some are stay-at-home parents who are providing that childcare.

And they're able to afford that because they have another earner in the family or whatever. So it just doesn't make sense. From that perspective, it's also hard to, there's not much evidence that doing that has any particular impact on the children. For the vast majority of families, the evidence that expanding pre-kindergarten has been limited to looking at very poor families and to very high and very expensive pre-kindergarten programs. But this is going to be an expansion that's much broader, and not to the people where it particularly makes sense.

REICHARD: And then talk about the family leave aspect of the plan.

MIRON: Economists have a bit of a puzzling perspective on paying for family or medical leave, similar to their puzzle about having government pay for a large range of benefits. What we'd emphasize is those are not nearly as good for the recipients as they might think because employers are going to respond to those policies by trying to cut wages.

They know that if families are getting this paid family leave, that compensation is in addition to what the employers had been paying them. That means employers can probably get them to work at a lower wage rate. And so some of the benefit that families are getting is going to be offset, or at least over a few years by smaller pay increases or wage reductions that offset the benefits they get from the paid family leave and medical leave. In particular, there's going to be redistributions across different types of families. If you've already had kids and the family are not relevant, then you're not getting the benefit. Hey, so there's going to be cross subsidization across different types of workers, depending on whether you're eligible or likely to take advantage of those types of leave policies.

REICHARD: All right now, what about free community college tuition? What is the president proposing there? And how much is that going to cost?

MIRON: Well, that's roughly another 300 billion. It's useful to remember that almost any government program ends up costing more than as originally allocated. So as to allow free community college of several years for basically all Americans has some of the same features that we've already discussed. Many people are already obviously going to community colleges and paying for it through the resources or their parents' resources. So this is basically a transfer from the taxpayer broadly to those families that want to take advantage of it. It's also, should address the question of whether it's desirable, whether it's beneficial for anyone to be encouraging people to get more college education. That's clearly true. For some people. It's not necessarily true for all people, knowing that it's paid for by someone else might in fact lure some people into thinking it's necessarily good, when it isn't necessarily the right thing for every person. And so it doesn't seem like a compelling expenditure of government funding.

MR: Okay. We’re going to focus here on the potential impact on the economy and on the national debt. So let’s start with the latter. Again, the president insists that he is not proposing any deficit spending. He wants to pay for it with tax hikes. What kind of tax increases does he want? And would it really cover the entire cost of this plan?

MIRON: The particular tax hikes that the President's proposing are meant to target people who are very wealthy. So it includes things like increasing the rate of taxation on capital gains, which currently pays a substantially lower rate than wage and salary income. It includes some changes in the way capital gains are paid when people pass assets on to their heirs. It includes some modification in the tax rates on very high earners in the existing income tax schedules. So that will undoubtedly raise some revenue.

The history of tax proposals is that they almost always raise substantially less revenue than promised, because the people who are subject to the higher taxes find ways to avoid being subject to those higher taxes. So people who might be hit by say, the capital gains tax increase, will delay realization of those capital gains. And so at a minimum, those extra revenue from the higher rate won't show up in the next year, or two, or five, or 10. And there are other ways in which people can try to avoid those. So on paper, the tax increases pay for a substantial fraction of it.

But economists also don't quite like to think of it that way. Because we don't think that we should be tying particular spending and particular sources of that spending. The additional taxes can go to pay for anything. And so it's not doesn't make economic sense to say they're paying for this new bill. They're just extra tax revenue. So they're paying partially for national defense, partially for Medicare, partially for all the things that the government does. And the real question is, can the government collect enough revenue to pay for its spending, not just in the next few years, but over the long haul? And that's where many economists are becoming increasingly dubious that we're on a sustainable path.

REICHARD: I wonder what you'd say to this—the White House contends that any dent that those tax increases might put in the economy will be more than offset by the benefits. What do you say?

MIRON: I find it very implausible that these policies are going to do anything to stimulate the economy in a way that generates extra productivity, extra GDP and therefore extra tax revenue. These are mainly transfers from some taxpayers to other taxpayers. In part, they're transfers to current taxpayers from future taxpayers. Because presuming that the debt is eventually kept under control, that the expenditures eventually paid for somebody who's going to pay for fire hazard, higher taxes in the future, including, of course, some of the same families which are getting the benefits of this increase expenditure now. But it's also not at all obvious how these particular proposals like spending more on pre-kindergarten leads to extra GDP or productivity. You can tell stories. You can say that if more people have paid pre-kindergarten, they'll spend more time in the labor force that could add to GDP. That is possible. It's plausible. It happens to a modest degree, but seems extremely unlikely to me it would come anywhere close to paying for this expenditure.

REICHARD: Well, Janet Yellen, the treasury secretary, has tried to downplay fears that this spending might lead to inflation. I wonder what your take is on that? Should we be concerned about inflation? And how might it affect people?

MIRON: I wouldn't focus just on this bill, or even the set of bills that the administration has adopted, or even the full set of stimulus packages that we've adopted over the last year starting under the Trump administration. Those are factors which might contribute toward inflation. But the US economy has had a path of expenditure coming from Social Security and Medicare that are increasing the debt sort of year by year, throughout the foreseeable future. And so those are fundamentally giving us an unsustainable debt path. And those are fundamental and why we should be worried that the Fed will eventually try to monetize the debt, or that interest rates will spike. And we'll be suffering from some sort of fiscal meltdown or something like that.

Now, is there inflation imminent? There are a number of indicators which suggest inflation is sort of on the verge of heating up. Does the Fed have time to do something about it? Probably, but it's hard to get that timing on those anti-inflation measures. Exactly. Right. So do we have a problem? Yes. Is it fundamentally due to the recent fiscal stimuli? Not so much. It's much more due to policies that have been placed for 45-50 years going back to Medicare and even farther than that for social security? And should we be worried about it? Yes, we should be worried somewhat about it because if inflation gets higher—and more importantly, if it gets more unpredictable and out of control—then that seriously disrupts the economy.

REICHARD: Professor Jeffrey Miron has been our guest. Professor, thanks so much for your time. Really appreciate it.

MIRON: My pleasure. Thank you.