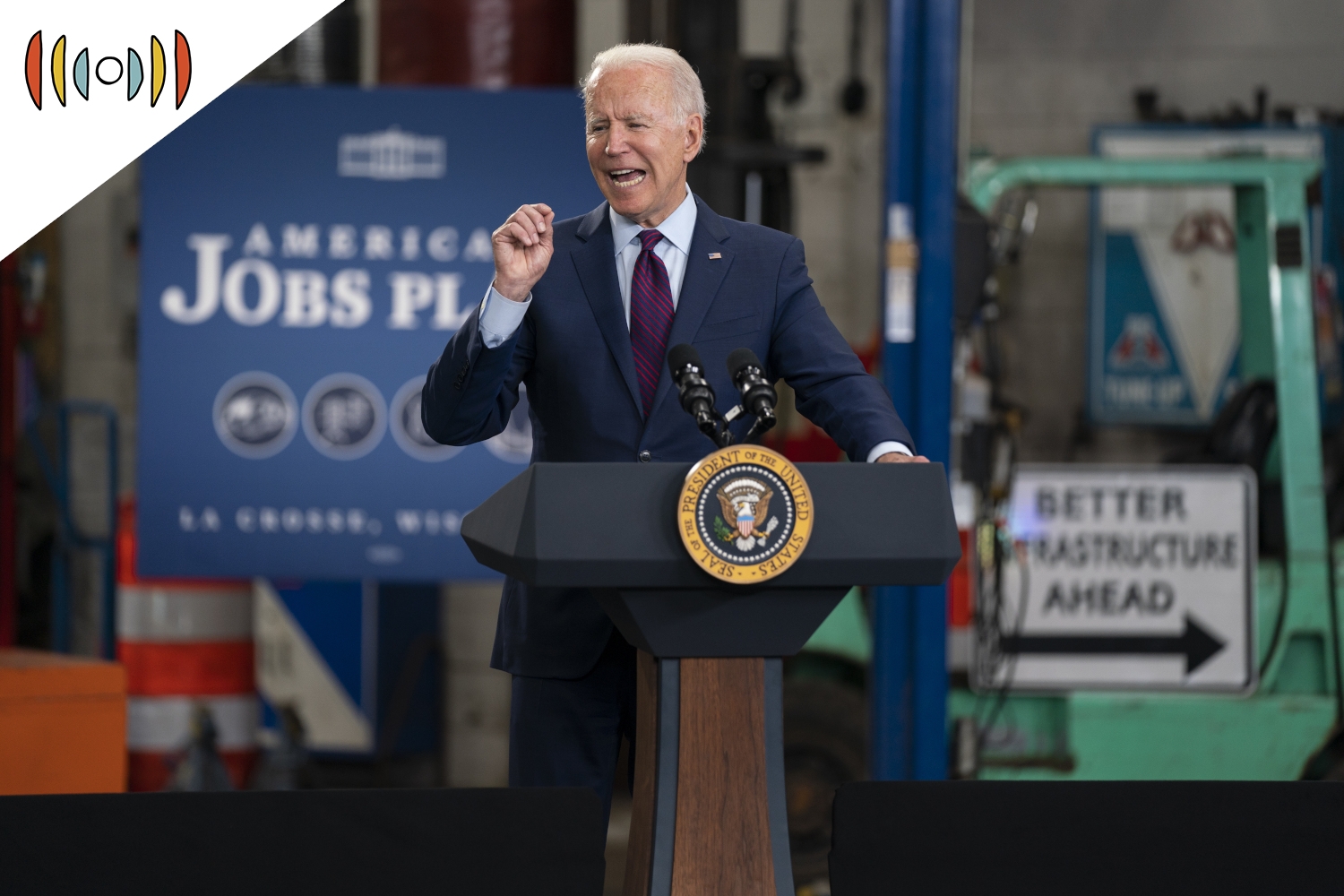 NICK EICHER, HOST: And I’m Nick Eicher. Up next: deal or no deal?

Last week, after many weeks of wrangling over a possible infrastructure deal, President Biden huddled once again with a bipartisan group of senators at the White House. When he walked out of the meeting, he declared to reporters, “We have a deal.”

BIDEN: Five Democrats, five Republicans, part of a larger group, have come together and forged and agreement that will create millions of American jobs and modernize our American infrastructure to compete with the rest of the world and own the 21st century.

REICHARD: Republicans agreed to a total package of nearly a trillion dollars. A little less than $600 billion of that would be new spending.

But they were not on board with another trillion-plus in new spending on social programs that Democrats call “human infrastructure.”

So the president and top Democrats said they would drop those measures from the infrastructure bill. But they are not dropping those spending priorities all together.

BIDEN: What we agreed on today is what we could agree on, the physical infrastructure. There was no agreement on the rest. We’re going to have to do that through the budget process.

EICHER: That means passing that spending in separate legislation using the budget reconciliation tactic in the Senate. That removes any possibility of a GOP filibuster and allows Democrats to pass it with no Republican votes.

But many Democrats say they won’t back the bipartisan bill unless the other separate spending bill also passes.

REICHARD: Republicans say if Democrats insist on joining those two bills together, then the bipartisan pact is a sham—a shell game—simply moving the money from one bill to another that passes at the same time.

So what happens next? Will the deal survive? And what will it mean for Americans if it does?

Here to help answer those questions is Brian Riedl. He is a senior fellow at Manhattan Institute. Brian, good morning!

REICHARD: Well, these two bills together are the infrastructure plan and the separate spending package. President Biden at first said he’d insist on both bills passing. But the White House now says he will sign the bipartisan bill into law with or without a separate spending bill. Is that correct?

RIEDL: The President has been somewhat all over the place on this, but it seems like at this point his position is that he will not wait for the infrastructure bill. He will pass the $600 billion bipartisan compromise if it comes to his desk. The problem, however, is that House Speaker Nancy Pelosi has said she will not bring the $600 billion compromise to the floor unless the reconciliation bill has already passed. So, even if President Biden's position is that he will sign it, the Democrats aren't all on the same page and the bottle neck just moves over to the House.

REICHARD: Sen. Joe Manchin said on Tuesday that he would support a spending bill that Democrats would push through using budget reconciliation, but doesn’t want that tied to the bipartisan infrastructure plan. That’s key because as the most moderate Democrat in the Senate, he’s kind of the swing vote for Democrats now.
Is there any sign at all, Brian, that Democratic leaders in the Senate will yield on this and agree to pass one bill without the other?

RIEDL: I think in the Senate, they're willing to do so. I have not heard majority leader Chuck Schumer say that they had to be married at the same time. So really, again, it comes down to the House. They might be able to pass it in the Senate, although it's going to take a while because they have to do another budget resolution first. So this could take about two months. Before they would before they would try to do it all. But either way, you're going to need to get Nancy Pelosi to actually break the bottleneck in the House for it to get to the President's desk. One factor, too, is they're dropping Republican support at this point. I thought last Thursday this thing could get about 20 Republican senators to vote for it. Right now, they may not even have the 10 Republican senators they may need to pass the bill without reconciliation.

REICHARD: Well let’s talk about what would be in this infrastructure bill if it does make it to the president’s desk. Give us a high level overview of what spending measures the two sides were able to agree on?

RIEDL: Sure. It's about $580 billion and this is the more traditional infrastructure that's more bipartisan. It's roads, bridges, transit, Amtrak, airports, electrical grid, electrical power, and water infrastructure. There was about $600 billion of that in the President's American Jobs plan and the Republicans have essentially said we'll give you all of that $600 billion dollars for this traditional transportation, electricity, and water infrastructure, as long as you don't do the other things that were in that big bill, such as long term care, housing, corporate subsidies. That was what was negotiated out of the President's American Jobs plan.

REICHARD: Mmm-hmm. And we know that in response, the president did in fact drop a lot of that spending from the infrastructure bill. That was largely because—again—he expects Democrats to deliver that spending in a separate bill.

But where are Republicans stretching on this? What have they agreed to that they didn’t really want to agree to?

RIEDL: The overall price tag of $600 billion, I think is beyond what Republicans would have wanted to put into additional infrastructure on top of what they're already passing as part of the normal highway bill and the normal legislation. There's a lot of Republicans who think $600 billion is particularly too much in areas like transit, and for the airlines. So for Republicans, the $600 billion is a stretch. Additionally, things like the tax gap, where lawmakers are going to empower the IRS to be much more aggressive is not something Republicans have traditionally pushed for. I think a third area is that typically, Republicans have wanted to pair infrastructure spending with reforms to make infrastructure more effective—things to lower the costs, such as addressing the Davis Bacon law, which requires prevailing wages be paid and raises wage costs by 22%. There's a lot of regulatory changes like that that Republicans did not ask for. And so Republicans feel like we're giving a $600 billion increase in things we're not necessarily ready to spend that much money on. We're going to give tax revenues and we're not going to require a lot of infrastructure reforms on the regulatory side. That's their sacrifice.

REICHARD: A major point of disagreement has been how that spending will be paid for. The bill will come due. Where does that stand?

RIEDL: Right now, Republicans have said that they want the bill to be paid for mostly through spending offsets. Manchin has said similar—he wants the bill not to add to the deficit. At this point, they have talking points on how to pay for it. They do not have a set scoring plan. A lot of it is repurposing money from past stimulus bills related to the pandemic that aren't going to be used. There is a little bit of money from what's called closing the tax gap, getting people to pay taxes that they are owing that they're not paying. There is extending certain fees that expire over the last couple of years. I don't think they get the $580 billion to pay for it with all of these, I think they might get about half of it. But that's part of the problem right now is they still don't really have a full deal on the offset side. They have a commitment to pay for it and they have talking points on how to pay for it, but what we don't have is a scoring plan showing that these offsets will actually make much of a dent in the cost.

REICHARD: Anything in this bipartisan agreement that surprised you?

RIEDL: It surprised me that they did not do more on the tax gap. President Biden has said he wants to collect an additional $700 billion over 10 years that is currently being evaded or under reported. Republicans have generally been more tolerant of the tax gap. But the Republicans that I have talked to have said that they want to go after more, too. They want to go after unpaid taxes much more aggressively than they had in the past. They want to give the IRS more money. I'm surprised it was only $40 billion out of the $700 billion that Republicans agreed to, frankly, I expected Republicans to go up towards one or $200 billion.

REICHARD: Brian Riedl with Manhattan Institute has been our guest. Brian, appreciate your insight.

RIEDL: Thank you very much.